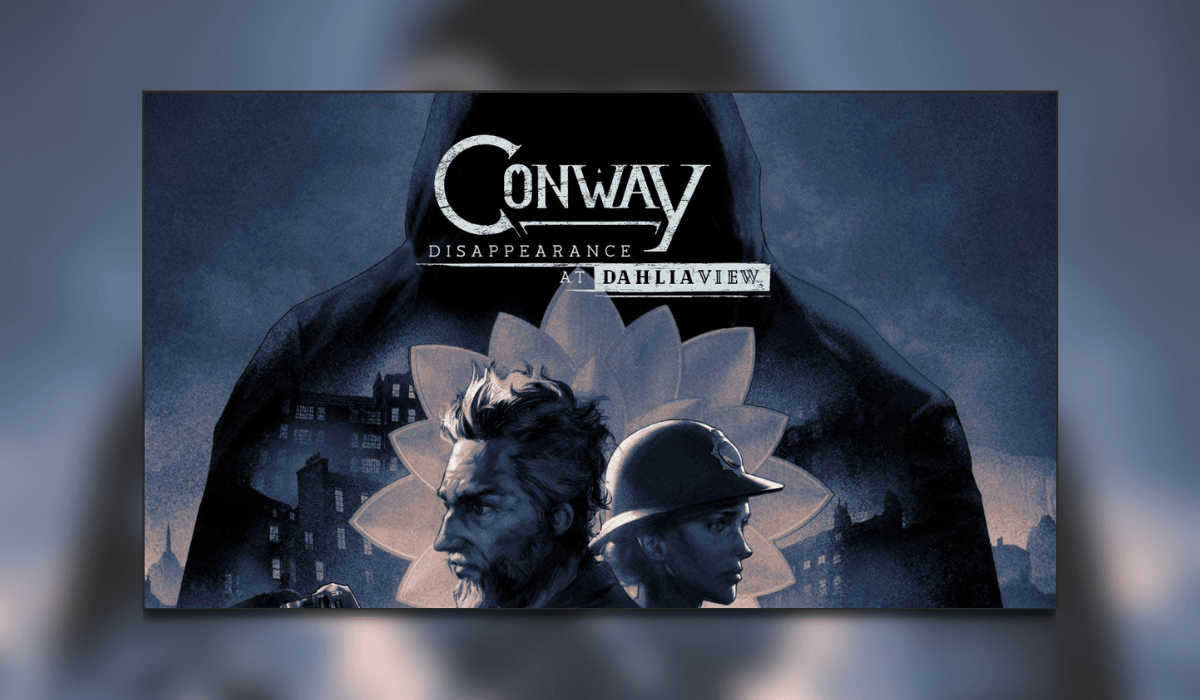 I do enjoy a game with an enthralling storyline, let’s get sleuthing!  If you enjoy this review check out my others here!

In a nutshell, Conway is a point-and-click adventure-style game.  As the story begins (and I promise no spoilers), you discover that a crime has happened within the private estate below your flat.  Your character, a wheelchair-bound Robert Conway gets his camera and begins to survey the scene.  Using your mouse you navigate the camera lens around while zooming in and out using the keyboard.  As you see areas of interest the focus box turns yellow and you can take a photo.  All throughout your scouting, Robert keeps a narrative going as he tries to put together what he thinks has happened.  His camera becomes a very useful tool as it is used not only to take photos of static scenes but also ones that play out between neighbours as you are watching them.

With your initial observations concluded, you are left to move Robert around his flat and down to the road below.  Movement can be tricky at times but only down to steering the wheelchair in the correct direction.  Inside the flat there are many areas that allow you to take a closer look at them such as the kitchen cupboards and sink to a desk filled with interesting historical information that serves to give you a better idea of who Robert is and was.

Once down on the road you begin speaking to each of the neighbours.  It becomes clear that 8-year-old Charlotte May has been taken and her father has been beaten in the process.  Like many great crime thrillers, it does become apparent that pretty much any of the neighbours could have done it and suspicions run high.  The prologue is certainly very observational when it comes to gameplay however it kept me captivated at all times.  Robert’s inner monologue drives the storyline along as well as his interrogation techniques.

As Conway begins to gather traction the puzzle and selective dialogue element that you expect in point-and-click games bursts to life.  From working out how to gain particular items, access certain areas as well as good old combination locks, Conway has it all.  I found some of the sleuthing to be nice and casual however there were a few moments whereby you were pressured by a timer to select the correct item or choose a certain narrative path.

Back at Robert’s flat there is an evidence board.  Here you can decide which evidence is key to the case as well as bin off the red herrings.  Easier said than done!  Robert ponders questions and it is down to you to link the evidence to the question in order to justify the statement.  When you get to these stages you cannot seemingly leave the board until you have found the correct links.  If it does prove a little tough hints are available.

Conway looks amazing.  The artwork is really something.  From the characters right down to the locations, it oozes a ’50s England charm while the weather creates the mood of the situation.  The attention to detail is brilliant with many items being able to be picked up and interrogated.  So much so that there are many red herrings.  You must check everything as to not overlook the thing you are really looking for!

Being an observation thriller, the camera mechanic when in Robert’s flat is magnificent.  With scenes waiting to be played out once you are looking in the right direction, it really shows how ideas can be formulated from what you think you may have seen.

The game camera angles in Conway remind me a little of Heavy Rain as they are placed in different locations depending on the area you are in.  This gives a good perspective of your surroundings.  They are not always static either, on occasion the camera will dynamically follow Robert as you steer his wheelchair.

When it comes to the audio, it would not be complete without a fully voiced narrative.  Every character has their own personality and traits that play out through not only their actions but what they say and how they say it.  Once more Robert lets you know his thoughts and feelings as the story progresses.  The whole storyline is just so damn captivating!

I haven’t completed Conway yet but I am many hours in, the evidence is stacking and the suspects whittling down.  The plot is superb and it has me hooked.  Being a point and click it would be the type of game that you play through once and leave it a long while before possibly returning to play again.

What a game!  Seriously if you love thrillers go and download the demo and see what you think for yourself.  Everything is so beautifully logical but it isn’t exactly set out on a plate for you.  Robert’s constant nurturing narrative ensures that you are always made to feel that you are slowly solving the mysterious disappearance.  With his inner monologue dropping you hints as to what to possibly do next and his personality when interviewing suspects, you are never left feeling out in the cold or left pondering about.