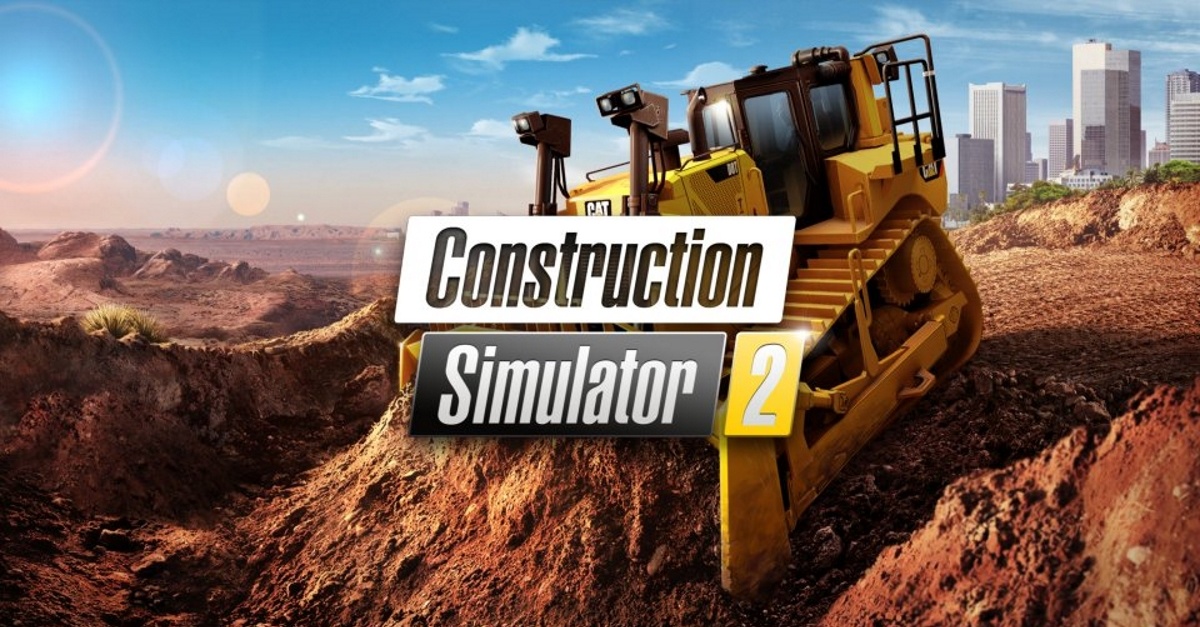 Weltenbauer. Software Entwicklung GmbH bring us Construction Simulator 2 US, a building and tycoon game all rolled into one. The big question is, has it laid a solid foundation, or will in crumble under pressure. Hard hat and safety goggles at the ready, I’m going in.

Construction Simulator 2 US puts you in charge of a construction company. Learn to drive a truck and then heads out into the world and start a business. This is clearly the American dream in full force. A brief tutorial will guide you through the basics of driving and navigation, then you are on your own. Having said that, you get a lot of tutorials on vehicles as you purchase them.

With each job completed you gain money and experience to level up, once levelled up you get skill points. These skill points are used to help you grow your empire. Your first job is a continuation of the tutorial, learning how to dig and move earth primarily, but also an introduction to the building merchant to buy stuff. Money is used to buy new vehicles, supplies and upgrades to your home base. I just jumped straight in and hauled some stuff and dug some holes as I knew how to do that. Then I decided I was ready to build a house, a two story house at that. I dug the trench as I was a master hole digger, but then I had to do some stuff with concrete. This was well out of my comfort zone, but I had found a really useful feature and I skipped this step. I then bought timber, insulation and MDF and finished the house off. The money and experience came rolling in.

The more experience you have, the more money you have and the more vehicles you have, generally the better contracts you get offered. I bought a dump truck, a tractor and a cement mixer and put up a couple more houses. Lets put it this way, the more you play, the better you get. There are items to unlock at certain levels, so keep plugging away and reap the rewards. The maximum level in Construction Simulator 2 US is 20, and that’s going to take a lot of time to build up to.

How Construction Simulator 2 US actually works

You drive around in your vehicles to the various destinations. Be careful though as reckless driving will cost you some money, especially if you start ramming cars through red lights and speeding. The turning circle of some vehicles is quite large so try to be careful of pedestrians as you mount the pavements. You can skip the driving section and just ‘jump’ to these locations to save time and after a while this becomes the normality. The different vehicles have different capabilities, the flat bed truck is used to collect goods from the merchant and also place constructed items in the right place. This is done via the mechanical arm which is controlled by the left and right sticks. Once you get the hang of it, it can be quite satisfying. The digger again extracts earth via a mechanical bucket on an arm and is controlled the same way. All the vehicles take an element of skill to control properly and work at an efficient speed. If you do not own the vehicle you need, you can rent one, but it can be quite costly as you are usually charged hundreds of dollars by the minute.

Jobs are broken down into stages, each stage has a dollar value associated with it, so you don’t need to complete the whole job  to make money. Stages are skippable as well, but this will mean the money goes to a rival company. You don’t need to worry about completing the whole job, for instance when you did a hole it self completes once you have reached a certain level. The same goes for lifting wall sections into place, you have a team of invisible fairies that will complete a lot of the job for you.

Construction Simulator 2 US is a fun little game that serves as a good stepping stone to see what comes next on the console. There are things that could be done better, and to be honest, some tasks can get a little tedious, but the advancement means that there is always good reason to find something to do. The way it works is like a cross between a simulation game and a tycoon game, you have to drive the vehicles, but you also have to manage your expenses. Don’t forget to complete your medals as well.

Construction Simulator 2 US doesn’t have the greatest of graphics, but you can see what you are doing, and tell what everything is, and that is the most important thing. I don’t think that anyone who plays will complain about them, or rave about them, they are what they are. As far as I can tell there is no way to dent your vehicle and it wasn’t from lack of trying. Pedestrians also vanish into thin air as well, but mainly when they see me speeding down the road in a dump truck. Can’t really blame them.

Lorry goes brmmm, and beeps when going backwards. What more do you want?

Construction Simulator 2 US  on the PS4 is just a stepping stone to greater things, and not a true sequel to Construction Simulator 2015. Weltenbauer. Software Entwicklung GmbH have simply put the mobile version onto the PS4 to get a taster out there to fans of the original and try it out on the console. I think that the franchise has a lot to offer and I am definitely looking forward to the next version. Hopefully there will be more money management in there as well as I like a good hiring and firing.

Construction Simulator 2 US has built itself up with it’s no frills approach to construction, though the gameplay is good, the variety of actions is somewhat limited. There are fun elements to the game that keep the player interested and it’s an easy to jump in and out of game. I see the potential of a great game to come, but this is just a stepping stone to that greatness that will be bestowed upon us in the near future.

Disclaimer: We were given a review code in order to provide this review. No hard hats or safety equipment was worn during the playing of this game and now I feel very naughty.