Speedrunners is a multiplayer side-scrolling racing game developed by DoubleDutch Games and published by tinyBuild. Speedrunners was originally a free web browser game. It was then expanded into a fully released game via Steam on 19th April 2016. It has been in Steam Early Access since 2013. Speedrunners were later released on Xbox One in June 2017, PS4 in June 2017 and just recently on Nintendo Switch on January 23rd, 2020. 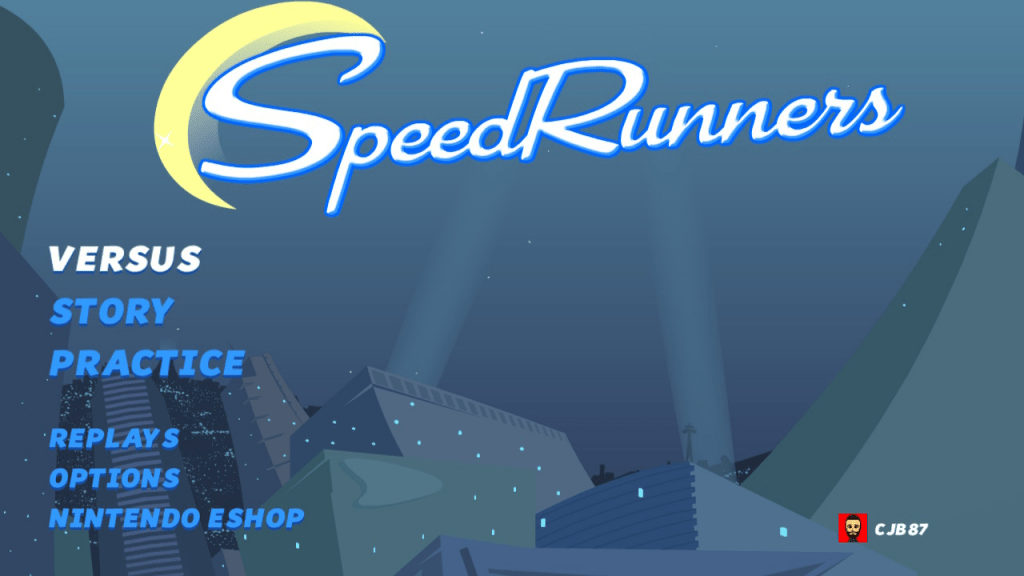 I must start off by saying I already love Speedrunners. Currently, I have it on PC and it is a must game to play with friends. I have countlessly played this fun little side scroller with 3 friends for hours on end laughing our heads off whilst being very competitive at the same time. So when I had the opportunity to give this title a go on my 2nd favourite games console, there was no question to be had.

Speedrunners is a simple game really and is all about competing against enemies where you have to outrun them around the city of “New Rush” whilst having the ability to use grappling hooks, power-ups, and the environments to your advantage to be the last man standing at the end. It’s a fast-paced game where the screen moves with the player that is in the lead, and the longer your in the race, the smaller the screen becomes, making it harder and harder. You need to make sure the screen doesn’t catch up with you, as if it does, you die and are eliminated from the race. This continues until there is only one player left which gives them the ultimate prize of the win and a point on the board. The race then restarts exactly where the last race finished, and you only move onto the next level once a character has 3 points on the board.

Once you’ve loaded the game up, you have Multiplayer, Story & Practice as your main options from which to choose. The story mode of the game is basically where you learn how to play the game and become familiar with the levels. The different difficulty settings are a great way to hone your skills. I recommend this before you set foot on the big wide world of multiplayer, or casually playing against friends. You can still unlock levels & skins during the story mode so it is a benefit, plus you unlock a little cool comic after each level giving that little back story. But if I’m being honest with you, the main attraction is the multiplayer aspect. So get practicing, learn the moves, and get competing online!!! 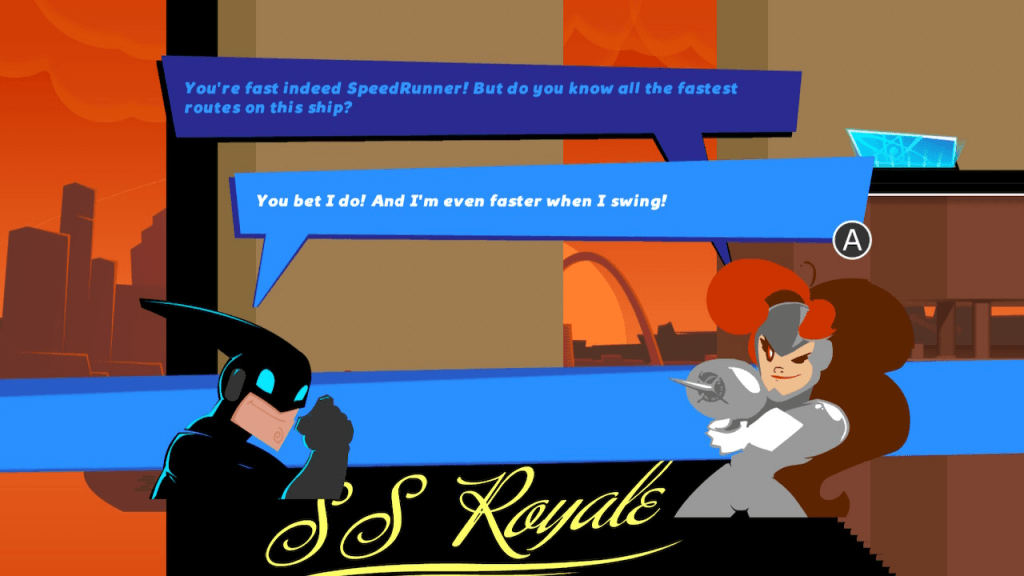 Speedrunners looks really nice on the switch. It looks exactly the same as if you’re playing on the PC, but just a smaller version, obviously. I didn’t encounter any frame rate issues or bugs that would compare to the PC version so it was impressive. Any multiplayer issues you say? I didn’t encounter any. Let’s be honest, Speedrunners completely suits to being on the Switch 🙂 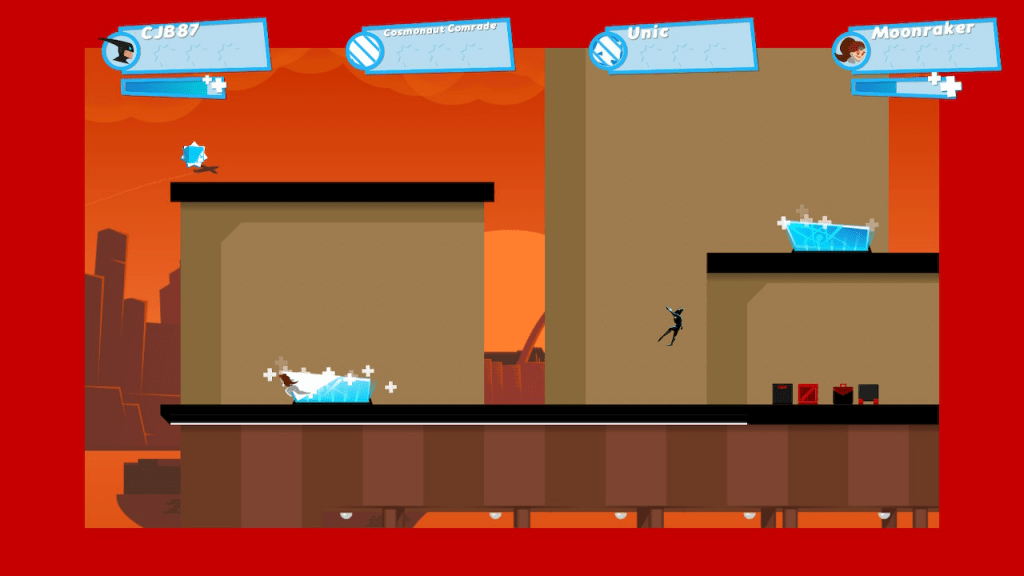 The soundtrack to Speedrunners is composed by SonicPicnic and is really good throughout the game. SonicPicnic states that “Get ready for some funky, big band, car-chase-movie, run-for-your-life-music, it’s showtime baby!” and that’s true. I really like how as the screen gets smaller, the music speeds up, gives you that really intense heart-pumping feeling. 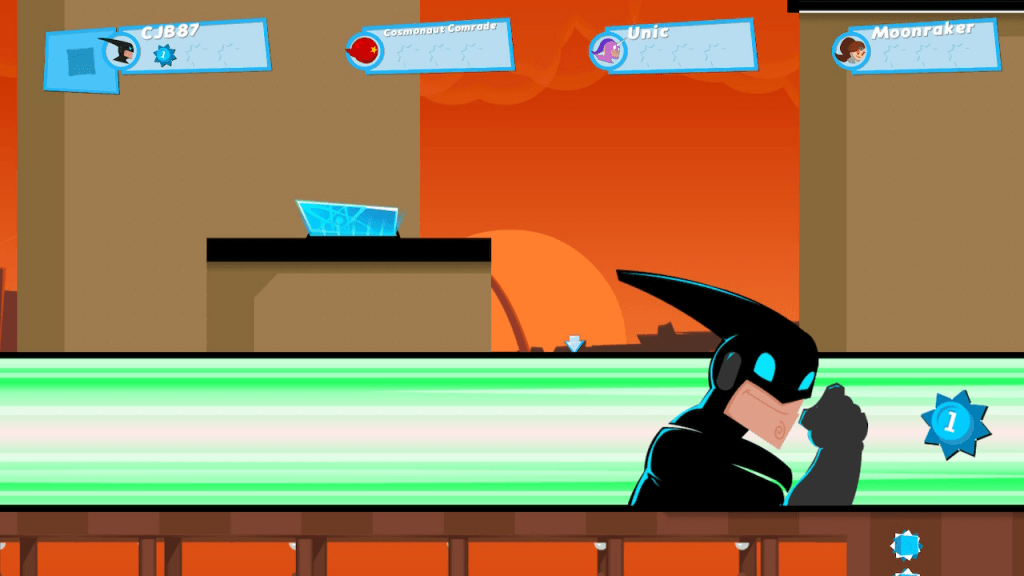 The longevity of Speedrunners relies on your earning experience based on your performances, causing you to level up which then unlocks new power-ups, levels, characters, and skins. There are a total of 24 playable characters to unlock, 9 pickups to use. This includes “Shockwave” – will trigger a short-range bright blue pulse, knocking anyone caught in the radius away from the center. Then “Freeze Ray” – beams in a straight line in and if it hits a player it will freeze them in a block of ice and “Fireball” – shoots a rock that rolls along the ground and if it hits another player, it knocks that player a little bit up. There are also 16 maps to fully unlock and you can even create your own, so there is quite a bit you can do to play Speedrunners for a good while. 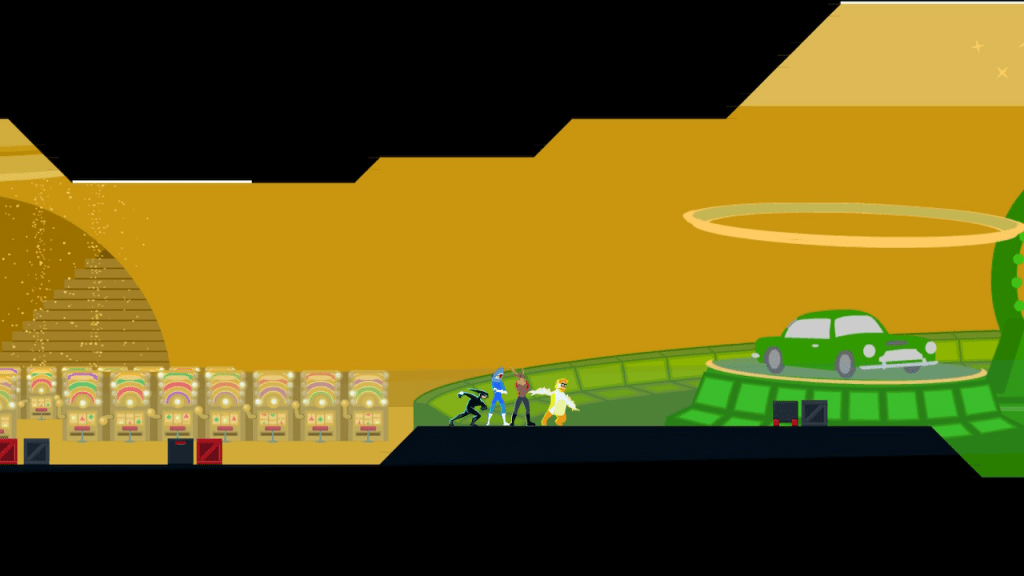 It’s a great game to just pick up and play, very much like Rocket League. If you have a spare 30 mins to play, or if you have a few hours to chill then Speedrunners is a great option. Do you want to have fun? Speedrunners is great fun. You want a laugh? Speedrunners gives you the giggles. At only £12.99 on the Nintendo store its pretty good value and 100% worth it in my opinion. Maybe invite some friends over for a night of local multiplayer. Then tell me to my FACE that you didn’t enjoy it.

Aces of the Luftwaffe: Squadron by German developer Handy Games, who incidentally were acquired ...

Grapeshot Games and Instinct Games bring us Atlas, a game of ruling the high ...