Taking on space with the Catastronauts by Intertia Game Studios is great fun, a couch co-op experience that seems familiar but give you a great variation on the formula. Come with us as we embark on a space adventure unlike any you have experienced.

In traditional couch co op style, Catastronauts lets you and three friends take control of your own ship. After picking your character you are greeted with a basic tutorial which effectively is a screen that shows you the buttons. Simplistic is the best way to describe the controls. Pick up, Activate and run faster is pretty much all that you will be using. 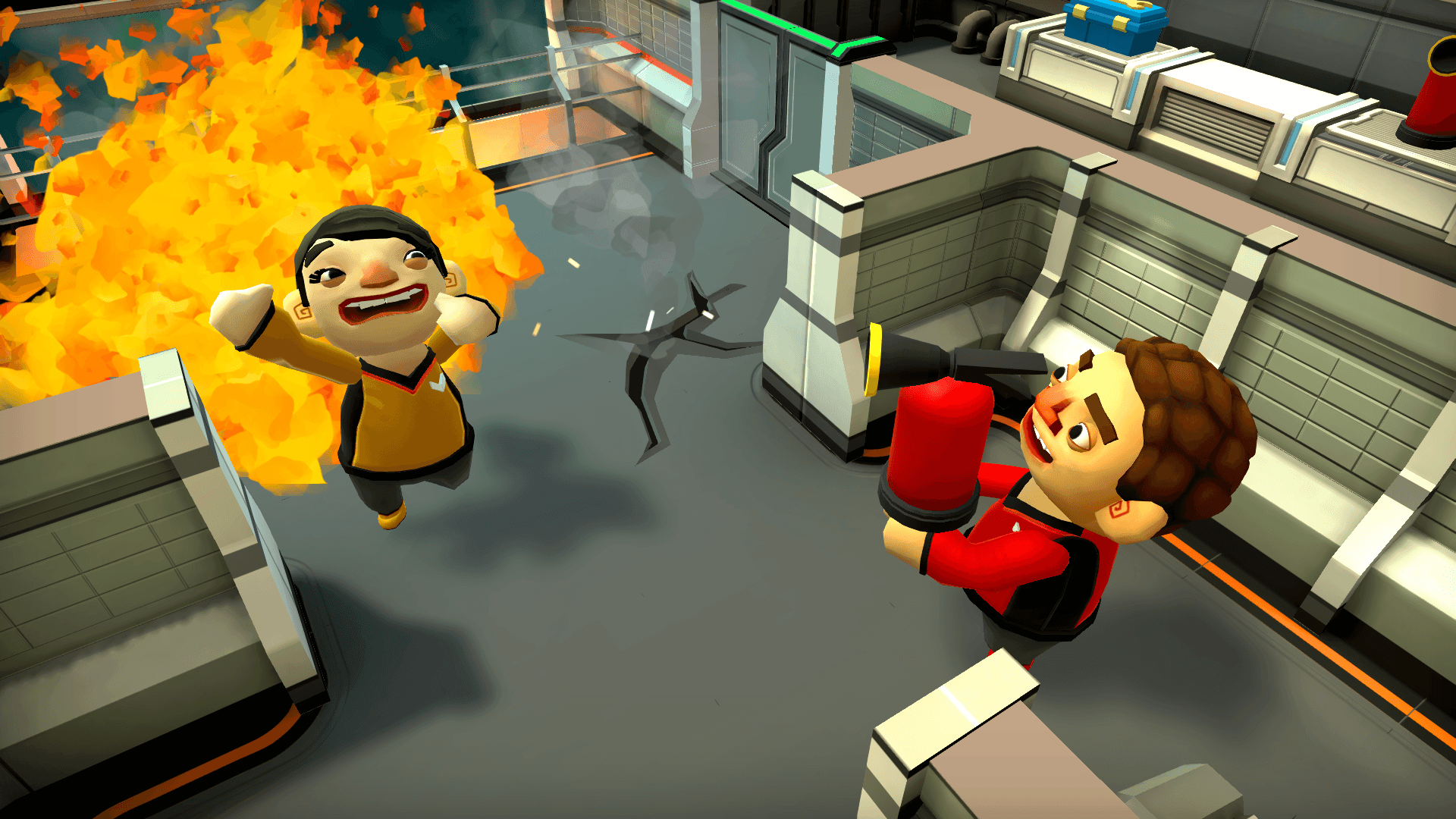 erm, you seem to be on fire!

Once Catastronauts has taken you through the controls its straight into battle against an enemy ship.  So each round has a different challenge, you have to fire your weapons, whilst repairing your ship from enemy fire and putting out fires. In other rounds you have to ditch mines out the loading bay, charge up batteries for use in weapons and then also deal with solar flares. Obviously there are other perils to deal with, but we don’t want to spoil all your fun now do we.

Progressing through each of the 30 levels you are given up to 3 stars on each level, but unlike other games of similar style, your progress isn’t halted if you don’t have enough stars. Giving you the freedom to progress even if you get zero starts for the previous levels is a great way to introduce new comers to the levels, and even throw them into the deep end of space.

Playing this game with friends is where its at its best. Playing one particular level where a solar flare is incoming you are left with a dilemma, if all your crew mates don’t make it into the protected room before it hits, you all die. So do you sacrifice one member of the crew for the sake of the rest of the crew? Hmm friendships will be lost! 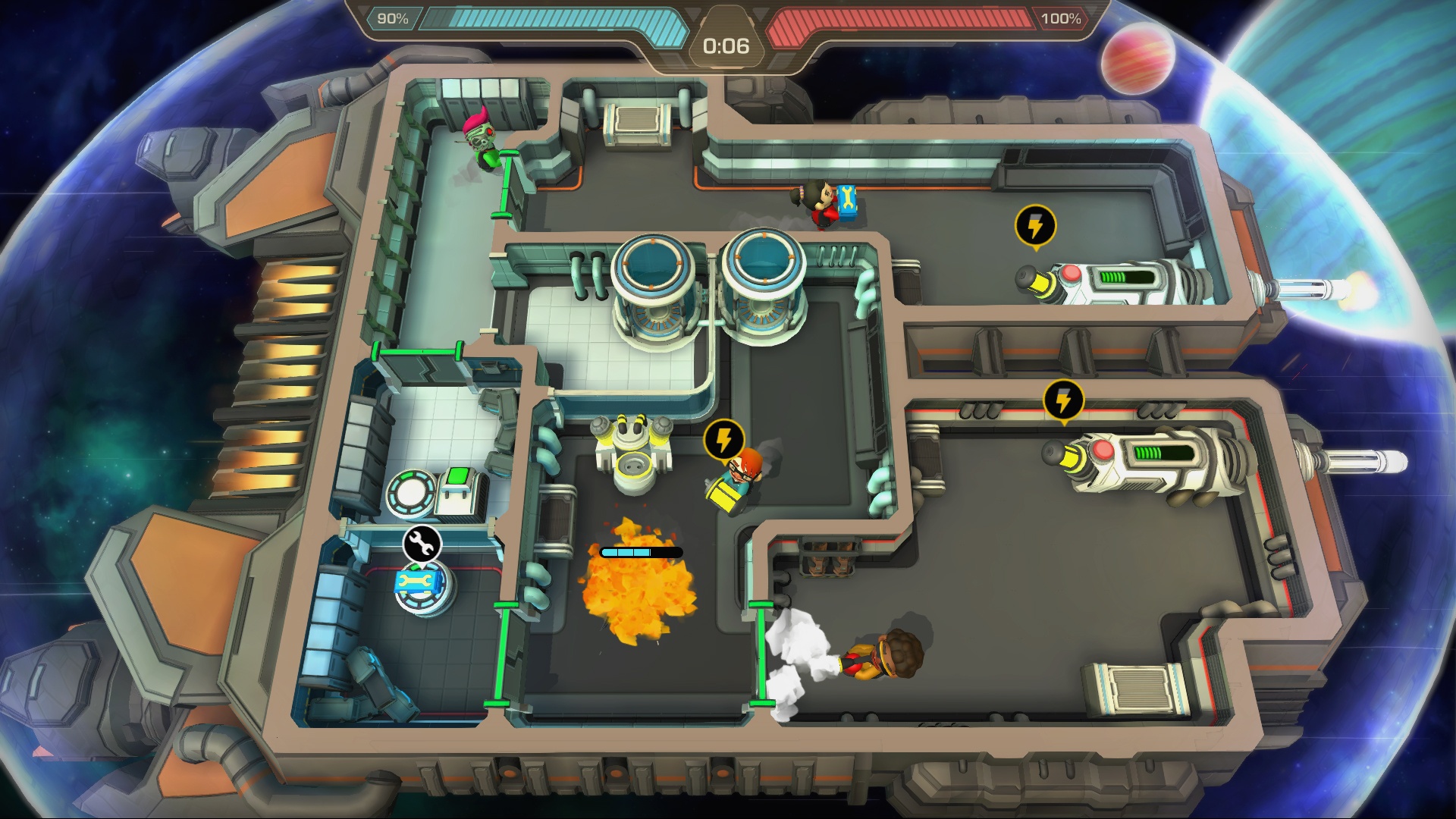 The graphics on Catastronauts are great, they are best described as cute. Each character has its own personality, and has their own emote which can be triggered with a press of the triangle button. My particular favourite is the cat character, wearing a space helmet and instantly recognisable when looking at the isometric top-down view.

When all hell breaks loose and fire starts taking up the screen its actually quite a pretty sight to be seen. All that fire in space, but its OK because you can put it out with the fire extinguisher that is placed on each level. Still, I think I might have a pyromaniac type issue.

The voice acting in Catastronauts is madness, no real voices are used, but instead a series of noises that gives each character and enemy their own personality. Then the in game sounds, these are satisfying, you wont be taking too much attention to the in game sounds when you are screaming at your friend to teleport a tool kit so you can repair a bit gaping hole in your ship. 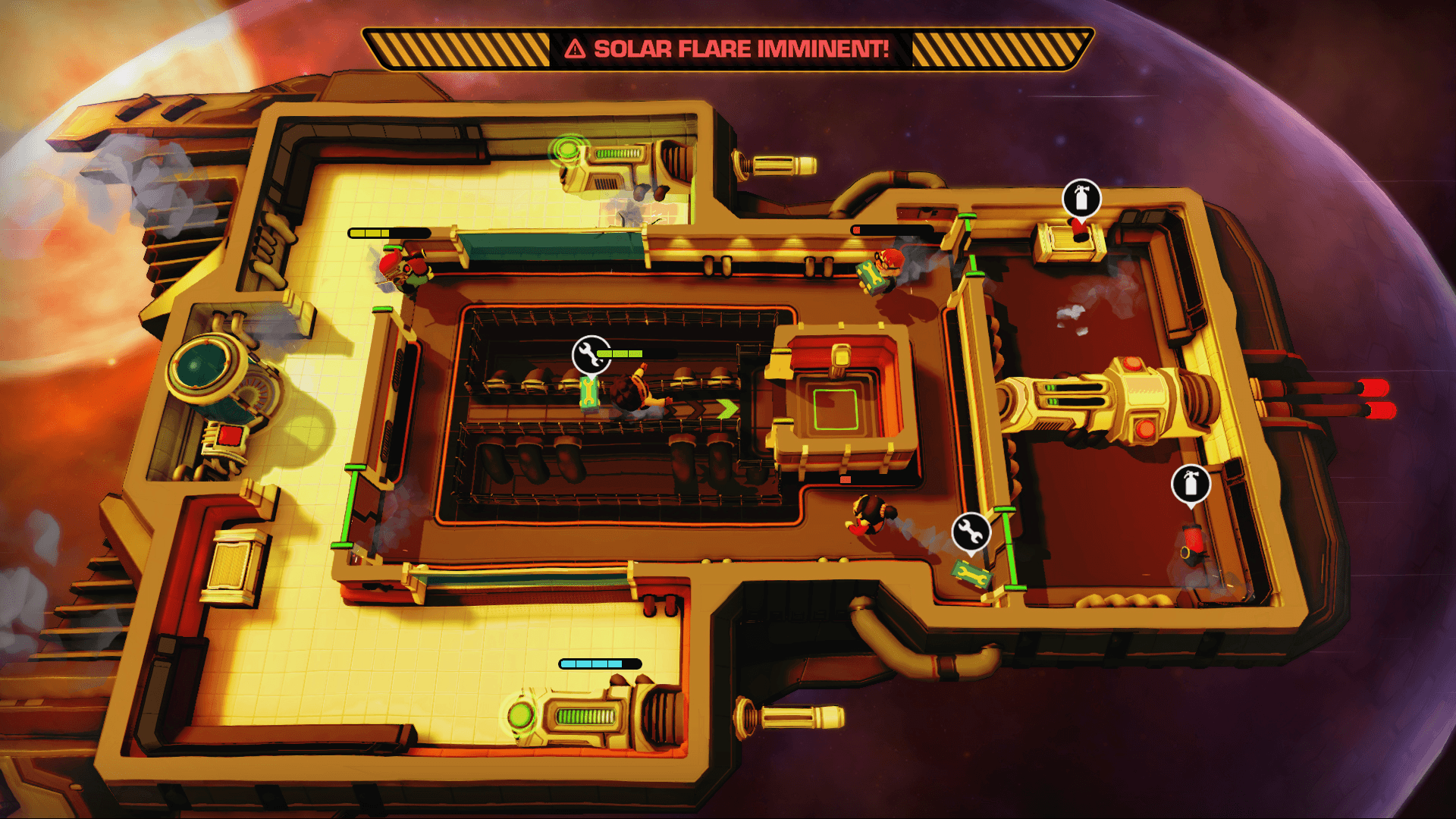 Do you close the doors or lose the ship!

So here is the only problem with a game like Catastronauts, and that is the fact that it is offline only. Now if you live near friends or have family members that will play the game with you then that’s great. However, if you live the other side of the country to your online friends, then this might not be the game for you.

In terms of actual gameplay, there is hours of fun to be had with Catastronauts. Each level can be triple starred, and getting that is a challenge in itself. So those completionists out there will be pulling their hair out when they miss out on the target time by a matter of seconds.

Catastronauts is a pure joy to play when in the same room as friends, and this is where it shows what its made of. Taking on enemy ships and getting that last fire of the lasers is satisfying and know that you will be moving on to the next level. However, its best aspect is also its worst, and hopefully Inertia Game Studios develop an online system for the game so that you can play with your friends wherever they live.