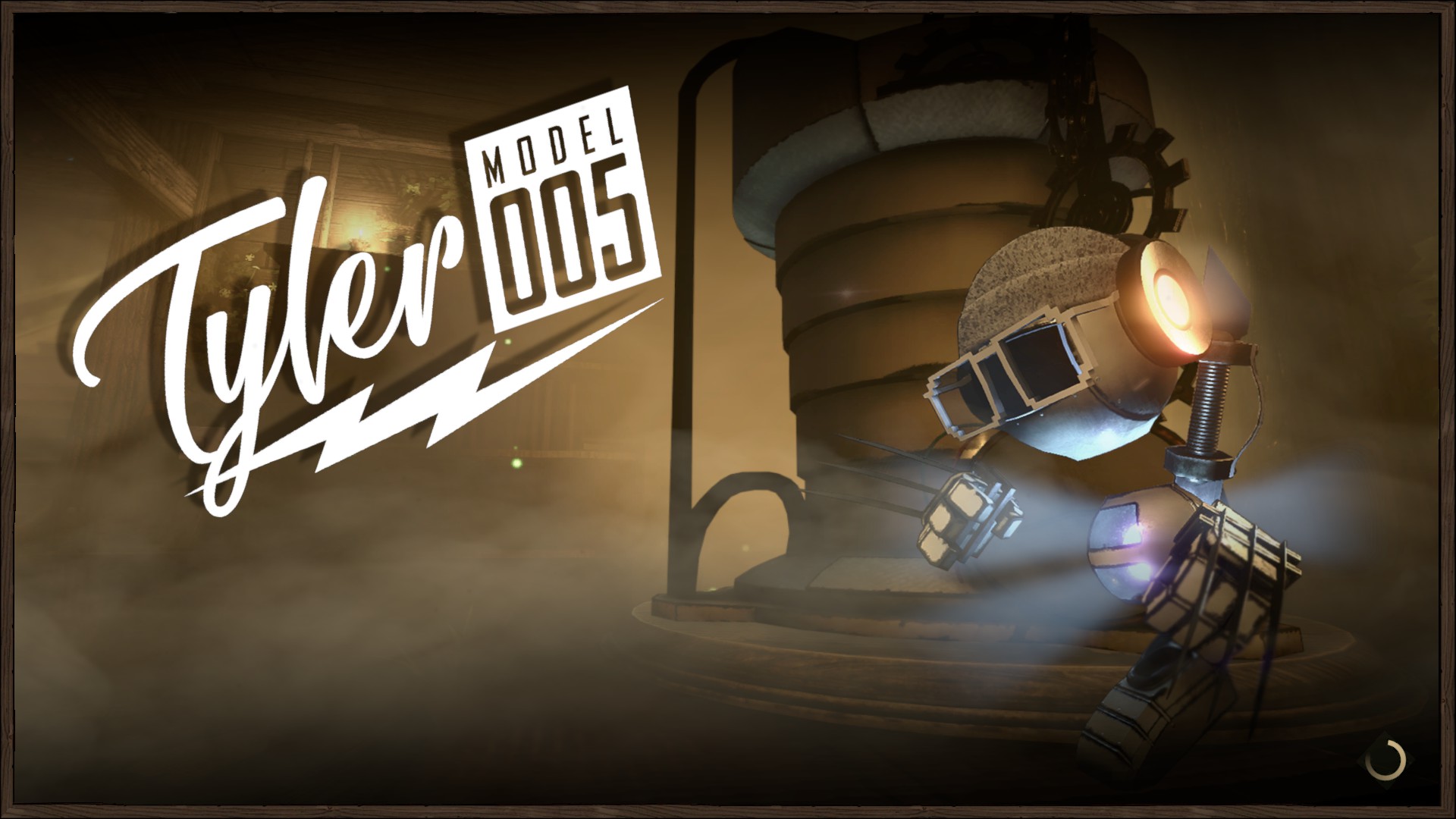 Reversed Interactive bring us the slightly oddly titled Tyler: Model 005, the story of a robot. Not sure if I need to read up on robotics, but rest assured that’s not going to happen. Time to put my I into this AI and go on an adventure.

Set in the 1950s, Tyler: Model 005 suddenly gets booted up after a rather long period of down time. It’s my job to guide Tyler though the house to see if I can help him remember who he is. The camera is set to third person so that interacting with my surrounding is easier. Tyler is solar powered and needs light to recharge, any source will do. Fortunately several lamps have been left around the house to help me survive longer. Keep the energy up and everything will be alright. I also have a level of H2SO4, or sulphuric acid to use it’s more common name. Finally got to use my Chemistry A Level, thank you Mr Derrett, it was all worth it in the end. This H2SO4 level went down when I got hit by various creatures that inhabit the house now. Death is not permanent, and that is a good thing, it’s how I like it.

Tyler: Model 005 starts with a quick tutorial, so I am a happy bunny to start with. Take care to read all the words as these are the instructions. Climb, fight, jump and illuminate will soon be mastered.

After the tutorial (dream) it’s time to go for real. I get a quest, I complete the quest, I get a new quest. It’s a classic format. I explored the house, lots of climbing, lots of jumping, lots of fighting and a fair bit of illumination as well. Check out the dark recesses and solve the puzzles. Tyler: Model 005 is well thought out and I didn’t solve the puzzles too easily. I learnt to hang from pipes and balance on beams, but not everything is so obvious. I really got into this game and was very close to forgetting to pick the kids up from school. It was no walk in the park, but by no means ridiculously hard. The laps were placed very conveniently, as were batteries. Blow thing up with cherry bombs as well. As I progressed I discovered that I was simply being used a skivvy for a fellow robot, so much for using my brain when he seemed much smarter than  me (or I).

The more I played, the higher my level. I could upgrade Tyler to suit my playing style and also kit him in some rather dashing outfits as well. If I collected the right combination of items I got a card which gave me bonuses. When I ran out of power I would respawn at the entry point to the room. This was ok, but slightly frustratingly movable objects would be returned to their original positions. Having said that, whilst it is frustrating, it is a necessity of the game, and one I needed to implement as I kept knocking a book off a shelf that I needed it to stay on.

If you fancy a game of tower defence, there are mini games throughout Tyler: Model 005. Obviously, you need to unlock them first, nothing is that easy.

Tyler: Model 005 is a good game, but by no means perfect. There were a lot of little things that frustrated me a lot. I’ll only tell you the 2 that got me the most. First one is when Tyler was stood on a moving object, the object seemed to move from under him rather than moving him. This was an object I needed to be stood on and kept falling off through no fault of my own. The worst thing was trying to stay on with little presses of the direction keys (Standard WASD), if I pressed the same one too quickly in succession Tyler would stunt roll off the edge. This made a simple puzzle a very hard puzzle. This was not a consistent issue and sometimes he would not be affected as much. The second issue was the camera. When hanging from a pipe the camera would situate itself inside the pipe. As you can imagine that was about as useful as a chocolate fireguard. Hopefully these issues will be resolved. I struggled a little with the inconsistency of movement as well, Tyler didn’t always seem to do the same thing with the same keys pressed in the same area. Ok, that was three things, I’m sorry.

Tyler: Model 005 has taken time to get the graphics good. Being a puzzle adventure game everything needs to look like it should, and Reversed Interactive have got it right. There are a lot of dark places to explore, and the lighting is very good. There are a lot of repeat items, but I can’t really criticise as this is commonplace in most games these days. I felt like I was exploring an old dusty house, and that is testament to a job done well. There were a few issues with objects passing through each other, and the creatures seemed to occupy each other’s space quite a lot, so maybe some improved collision detection wouldn’t go amiss, but these didn’t adversely affect how good the game is.

In Tyler: Model 005 there is very little to judge the quality of, there is minimal music unless you turn it on, but then in hindsight, why would there be? Reversed Interactive have done a good job of making you feel alone and isolated. The voices of the robots are a little weird, but you can’t criticise voice acting for a robot. The sound effects for the creatures are ok, but not great, especially the squelch of a dead spider. You will get combat music to get the blood coursing through your veins as you slay ants.

I love puzzle games, I want to use my brain and solve games, not just shoot zombies until more show up. Tyler: Model 005 hit the right buttons for me and hopefully it will do well. There was good logic behind the game that I hope the buying public will appreciate. I for one would love to see what happens to the little fellow next. Reversed Interactive have created a little gem with Tyler: Model 005 and I look forward to more of their releases. Priced at under £8, Tyler: Model 005 is a true bargain.

With it’s good graphics and intuitive puzzles, Tyler: Model 005 has the player engaged and alert all the time. Take this cute little guy on the adventure of his lifetime and show him what happened.