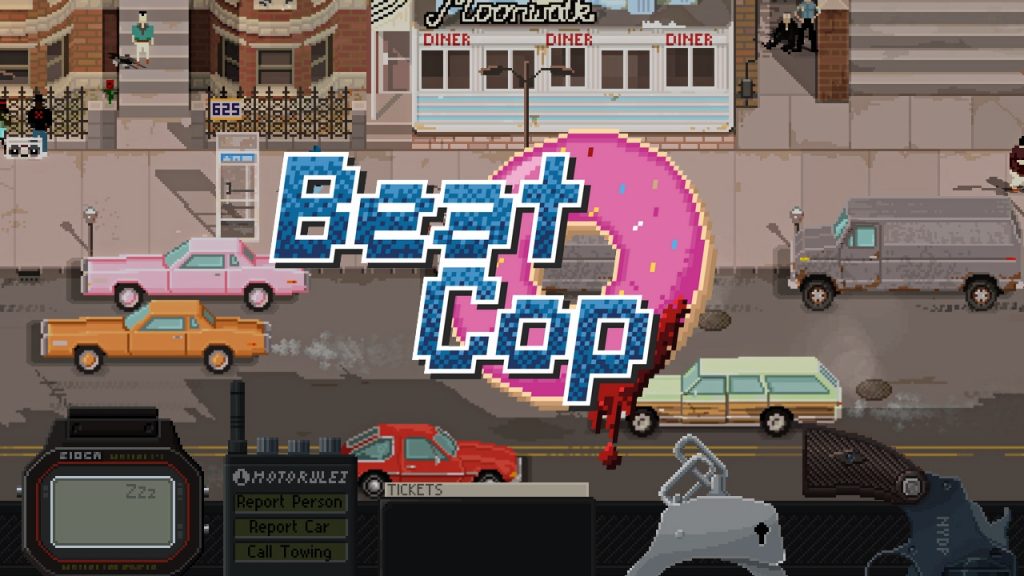 Beat Cop is the newest release from Pixel Crow. It’s very much a Police themed time management game where you take on the role of Jack Kelly, a disgraced Homicide Detective reduced to a ‘Beat Cop’ while trying to clear his name of a murder he didn’t commit.

Set very much in the 80s, Beat Cop aims to take players through the world of those classic cop shows we all know and love (or at least those old enough to remember them); Miami Vice, Hill Street Blues etc.

The biggest question; does Beat Cop fill that nostalgic void of a time long past? Or, does it fade into the background like those ’80s shows that no-one remembers (Hollywood Beat anyone?).

Right at the start of Beat Cop as the game is loading, you are greeted with a screen explaining how the game is based on 80’s cop shows and is set very much in this time. It then goes on to say that it doesn’t take itself overly seriously and as such neither should you.

My first thoughts here were that it was going to be something of a comedy game (my mind instantly went into Sledge Hammer (for those of you who remember that show)). However, it became clear rather quickly that this message was more of a ‘get out of jail free card’ for all the offensive material that would then follow.

THIS GAME IS NOT FOR ANYONE EASILY OFFENDED!

The first couple of days of being on the beat give you the outline of how the game is played and what you need to do. It’s not the most complex game, but the fun does lay in the simplicity. Write tickets, chase down thieves, stop off for a doughnut or two at lunchtime.

Each day the desk sergeant assigns you several tasks, these generally aren’t too difficult to complete. The chaos starts when during this you must keep a gang war from ensuing between two rather stereotypical groups. Complete a task for one group and you will incur the wrath of the other so it’s always best to keep them both neutral as to your involvement.

As the game progressed through the story, I found that at times I would start my beat but not be able to interact with anything, like the game had only part loaded the content. This became more frequent as the days became more difficult and I had to restart for any reason.

The game-play itself is rather addictive, it’s very difficult to complete just one or two days and then put it down. The problem I found was the direction of the humour, the offensive content really does walk the line between being relevant for the time (and funny), then at other times it was just not required. The game would almost definitely have been more enjoyable without it.

There are a few nods to 80’s movies and TV, probably the most notable are the names of the people that live in the apartments on your beat. No prizes for guessing which movies these are out of…

Due to the design of this game, I think its only right that I put the Graphics and Audio into the same section as they are very much ‘hand in hand’ in delivering the style that Beat Cop is looking for.

As you can probably guess by the Developers name, Beat Cop is a Pixel Art style game which is very reminiscent of the 80’s/90’s gaming scene and the music accompanies this perfectly.

Being a child of that era, the games look, and the sound is probably my favourite part.

As to be expected with this style, there is no voice acting, all interaction is text-based. Probably a blessing in disguise given the tone of some of the conversations, at least being text-based it takes some of the edges of it.

So far, I have completed 20 days within the story and while the days don’t take that long to complete, there does come a point after playing 8 or 9 days where you feel you need to take a break. This along with the story-line being rather linear is going to make re-play-ability a little hit or miss in my opinion.

It’s enjoyable and if it was open-ended after the story with random tasks and challenges then it would be something I’d go back to every so often and keep playing.

The trophies are fairly standard and don’t offer much in the way of making you play the game more than once.

Overall, I think Pixel Crow has put together a fun game that reminds me very much of the game Papers Please! In the way, it handles challenges and time management.

Could it be better? Definitely, and it wouldn’t take that much to improve either. Remove some of the jokes and perhaps include a bit more of a variety of characters and don’t paste the cultural stereotyping on so thick.

Disclaimer: A Code was provided in order for us to complete this review (No offence was taken!)