When Ubisoft first announced that they were bringing us an Assassin’s Creed game set back in Ancient Greece I was super excited. Finally I was going to get the setting that I’d always wanted this series to explore. Was I concerned that it was coming hot off the heels of AC Origins? A little as I started to wonder how many new things they could include when developing the two games side by side.

So does Assassin’s Creed Odyssey live up to the expectation? Here are my thoughts:

First thing I want to mention is that I splashed the cash and went for the Medusa edition which comes with a very nice statue and artwork book etc. (Yes I know, feel free to criticise but I did). 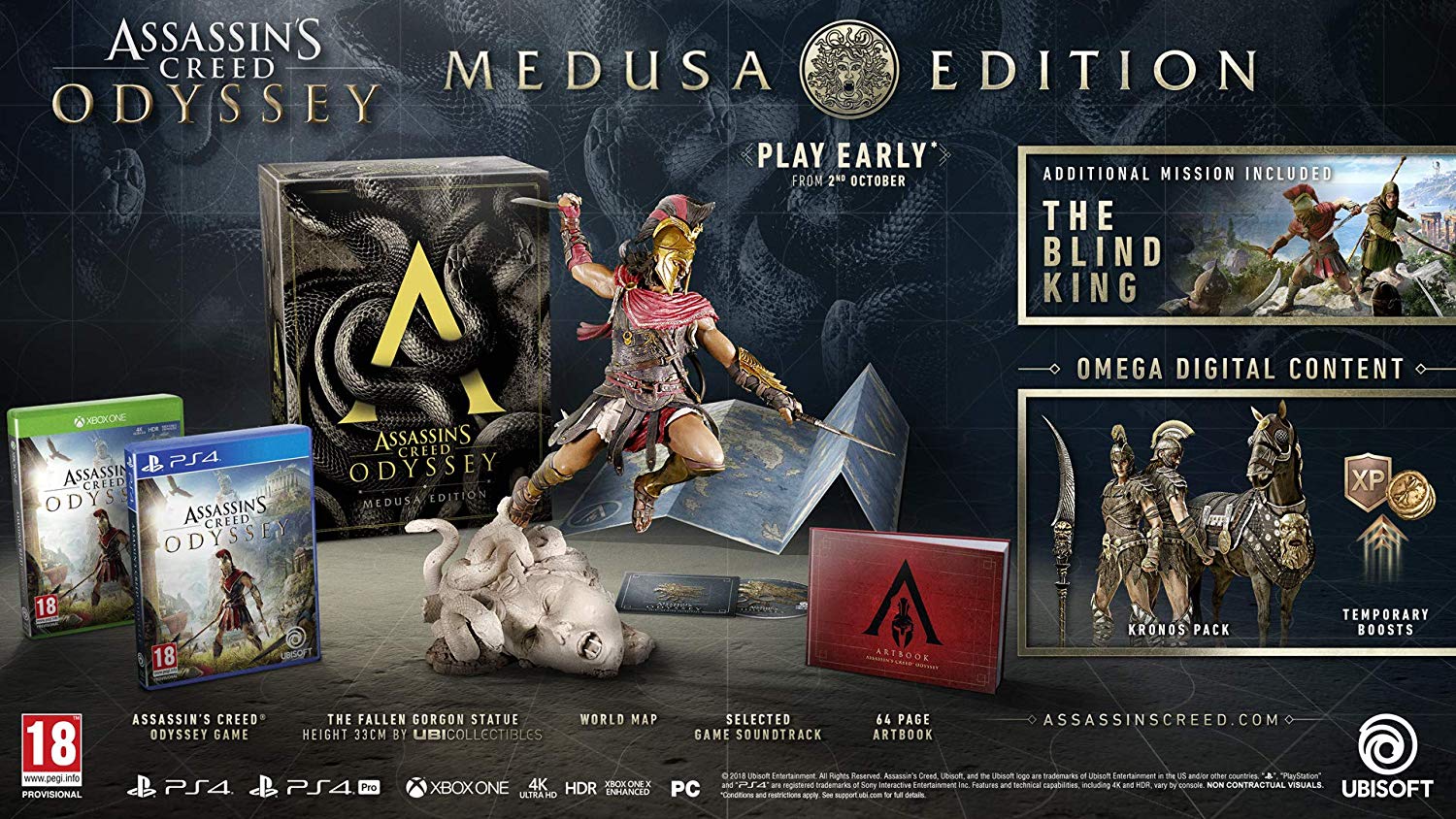 I won’t go into too much detail about what’s in this edition as there are plenty of unboxing videos online and really this review is about the game, not the collectibles.

I will say however I was very happy with the set and it peaked my interest of where the game was going. Why mention this? Well because it’s kind of relevant to the first experience I had when loading the game. Instead of starting the story, the first thing I was greeted with ‘buy some helix credits for the unlockable content’.

Not to be overly critical but really? I haven’t even started playing the game yet and Ubisoft are already shoving Loot Crates and Pay to win items down my throat? NOT HAPPY!!

Being as this was a game I was going to review, I thought, ok perhaps it’s just a few cosmetic items and bits so I’ll have a look. Five whole pages of content later and I was still going through all of the items to purchase. Absolutely disgusting in my opinion for a game that is already on average £50 to purchase. (Not to mention that I had purchased a Premium edition, which didn’t include any Helix Credits either).

Ubisoft? More Like U-Be-Stupid for thinking you were going to get a complete game!

Now that I’ve had my ‘little’ rant on this it’s time to discuss the game.

Right at the start of the game, even at the main menu I felt like I was playing AC Origins. I enjoyed Origins but this had me on edge as I was starting to get concerned that Assassin’s Creed Odyssey was going to be a carbon copy with a few graphical adjustments.

Before playing when I saw there was a character selection, I thought it might be similar to AC Syndicate. With Interchangeable characters that have different skillsets for certain missions. However, the game warns that you pick carefully as you cannot change characters after selecting. Instantly I was thinking ‘Does this mean that both characters are going to have a unique storyline and effectively we have 2 games to play?’ Sadly both have the same storyline, so it’s more of a cosmetic choice than anything else.

I picked Kassandra, because… well she has nicer eyes.

Throughout the first couple of hours of Assassin’s Creed Odyssey, I felt more and more like I was playing a skinned version of AC Origins with very little in terms of new ideas or style. The world is very much the same, you have an Eagle soaring through the sky for your ‘eagle vision’ instead of the Phylakes we now have Mercenaries / Bounty Hunters (however they show up on the map in almost the same way).

There are a few subtle tweaks to the way certain things work (even though they are essentially the same) such as the Skill trees and equipment, but nothing that really stands out.

There were only a couple of things I came across in this time that stood out as nice additions, the first was the inclusion of a contracts system (think along the lines of the notice boards in games like The Witcher). I like this idea as it means you can grind out the EXP to level up without having to just wander around aimlessly.

Secondly was the addition of dialogue options which the game says can influence the story longer term (I have my doubts that it’s really anything significant, mostly I just see it as possible romance options). 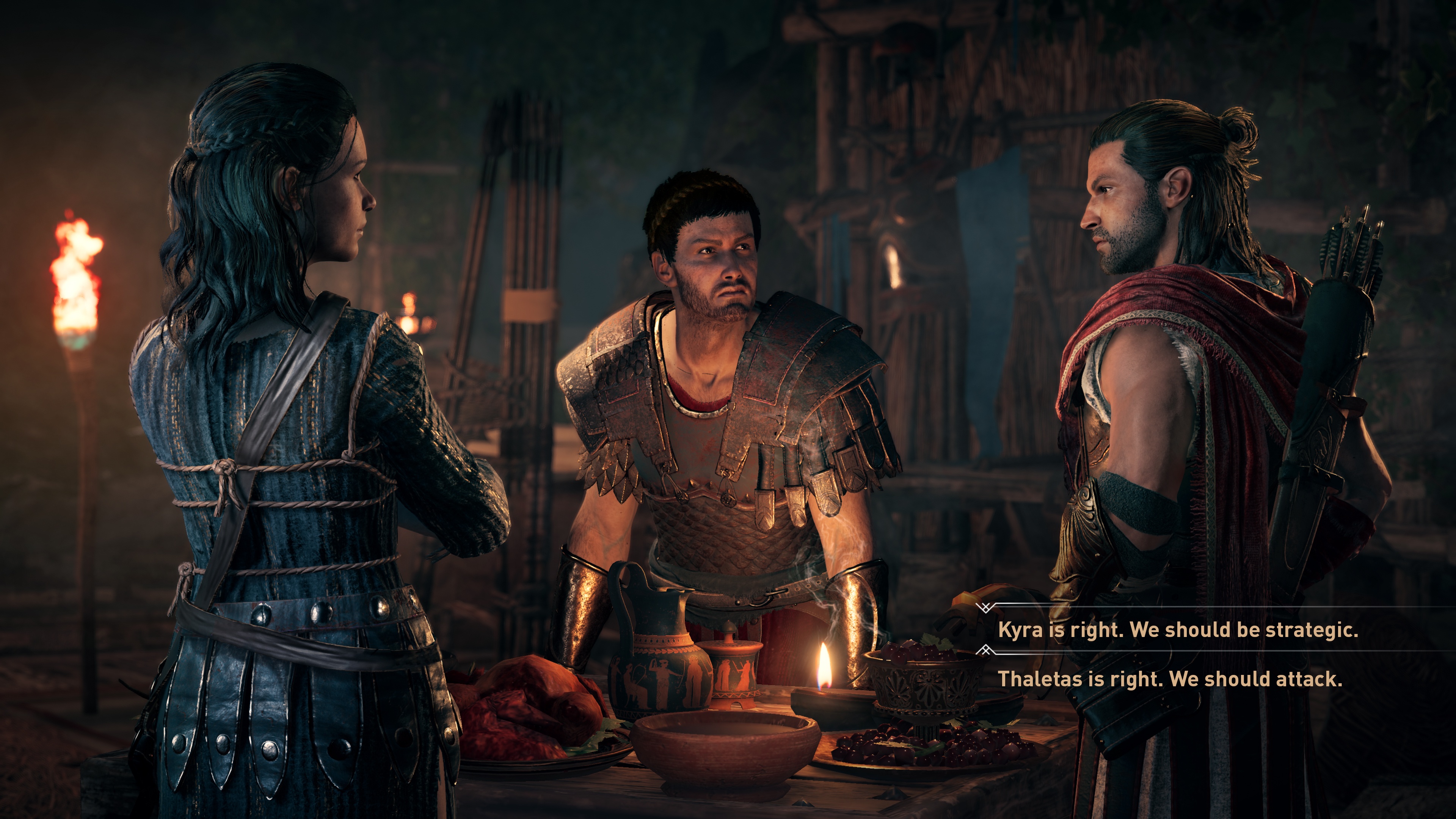 There are some nice additions to the combat system to make it a little more complex, as well as the return of the much loved ship combat from AC Black Flag. However the truth is there just doesn’t feel like there is much here that is fresh or unique. It’s just a new coat of paint on previous ideas.

I think the best thing I can say about the gameplay is that although it’s a new story, everything else feels like the return of an old friend (assuming you liked Origins). So it doesn’t take much time at all to settle back into and therefore doesn’t need very much of a tutorial.

Assassin’s Creed Odyssey looks great, but as a ‘Triple A’ title this is what I would expect. My issue here is that much like the gameplay it’s almost identical to areas of Origins. At times I found myself looking at the landscape within the towns and wondering if it was actually just copied. While I’m not a history buff, surely there should be a bigger difference between Ancient Greece and Ancient Egypt in terms of the building designs?

I did notice at times where there are multiple enemies to deal with there are some frame drops but nothing that really spoiled the experience and this was on day 1 so I’m sure there will be some bugs and issues and a patch to correct it very shortly.

We do see the return of the modern day counterpart (No not Desmond!), Layla from Origins! Much like the rest of the game, the modern day world looks great. Although just as I did in Origins, I haven’t spent a great deal of time there other than to have a little look around for the purpose of this review. 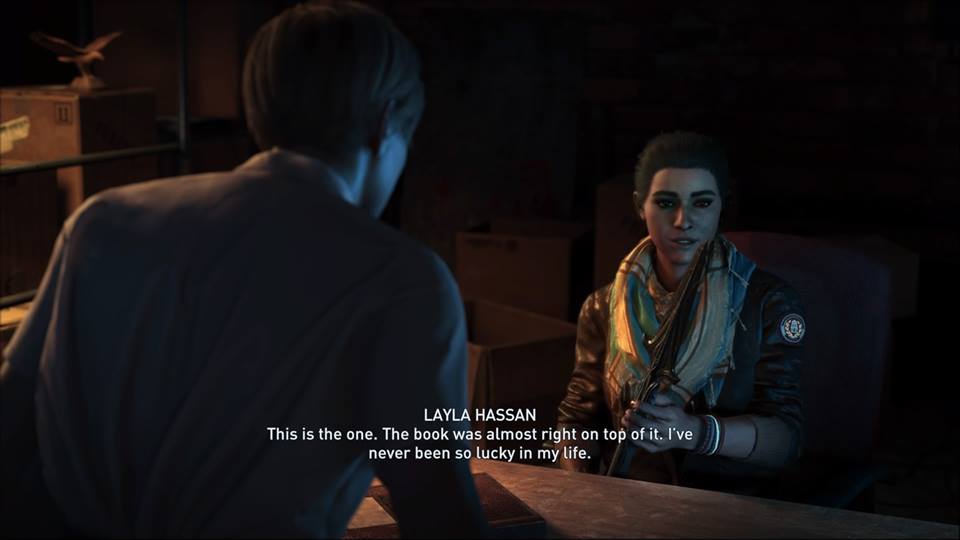 The voice acting seems to be a little hit and miss here. The main characters are well done as usual but as is the case with many of these large open world games the basic NPC’s are very generic with the same voice being used over and over with the same phrases making it very tedious to spend too much time around them.

A few times during combat I found the audio lag a little behind the visuals. Not much but enough to be noticeable and a little annoying (hopefully this will be fixed with a patch).

Just as a quick tag here to say that with the Medusa edition I received a copy of the Soundtrack on CD and I have listened to it separately from the game and I really like the music. I think soundtracks should be a more common place item with games as some of them have really amazing scores.

Given that I’ve spent most of this review saying that the game is very similar to Origins, this is another point where it’s very similar. But that’s a good thing as AC Origins was a huge game and Assassin’s Creed Odyssey is very much alongside it only with the addition of Ship Combat it doesn’t seem to feel quite so empty as you travel across the world.

The other question here is will you go back and play it again after? That is very much personal preference, I don’t see it being a game you will play for 20 mins here and there. It’s definitely going to be either you enjoyed the story and want to experience it again or if you want to trophy hunt. Otherwise I believe it will be a one and done (two if you want to experience the game as both characters).

There does seem to be an abundance of DLC coming for Assassin’s Creed Odyssey so hopefully this will help keep it feeling fresh. Fingers crossed they include some more original content and not just reskinned versions of the Pharaoh’s Tombs!

So, is Assassin’s Creed Odyssey the game I was hoping for and had been wanting for years? That depends on how I look at it. If 5 years ago someone had shown me the game without any knowledge of the other games then I would be screaming yes. But, the fact is that we have already seen pretty much everything on offer here from last year’s release and that makes me very sad.

As much as I personally enjoy the storyline and like being in that world in general its nothing that is going to attract new fans to the franchise and some existing fans may find it a little boring if they aren’t as engrossed in the Mythos of Sparta.

Technically Ubisoft haven’t really done anything wrong here. Overall it just feels like a weak cash in on what should have and could have been an amazing game built on the solid foundations of Origins.

Hopefully Ubisoft will go back to the drawing board and perhaps refrain from giving us yearly releases and ensure that each game is something special. The fans will be happier for it (I know I would be.)

Disclaimer: I had to spend my hard earned cash to purchase this product in order to provide this review.