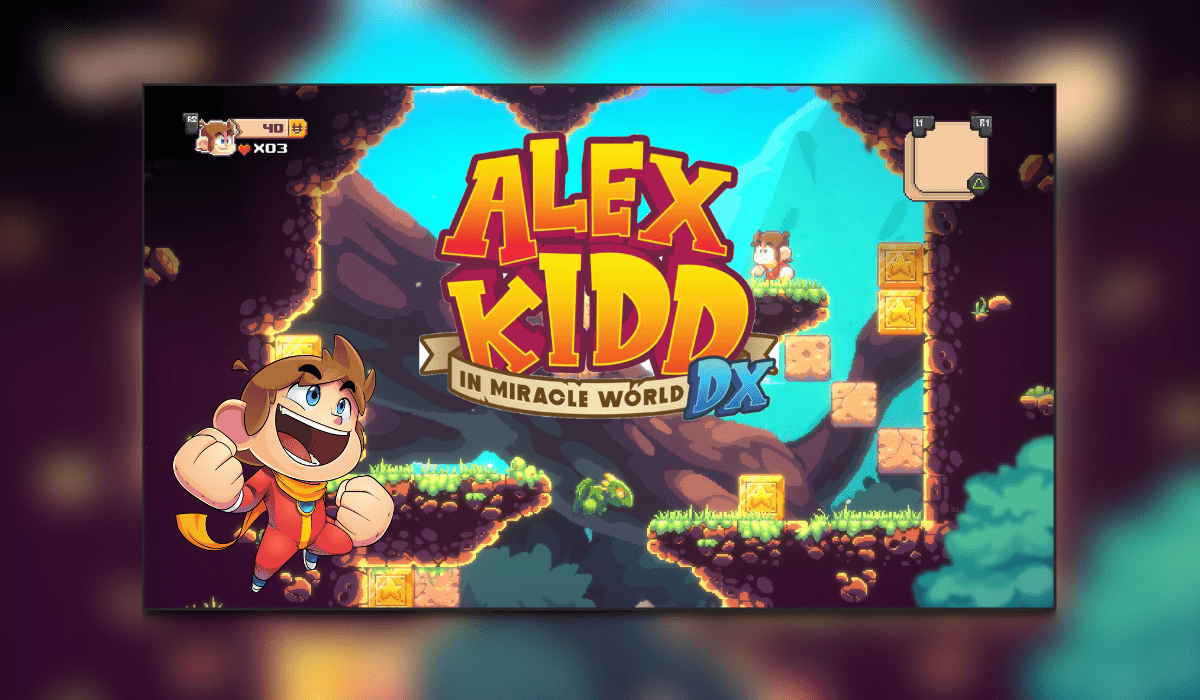 The story of Alex Kidd goes back all the way to 1986 with his first and most popular appearance on the Sega Master System, otherwise known as the Sega Mark III in Japan. The first game Alex Kidd in Miracle World was such a success for Sega that another 5 games were released with the final one, Alex Kidd in Shinobi World being released in 1990. It’s also well known that Alex Kidd in Miracle World was built into some versions of the Master System II. But, as the 8-bit era draws to a close, Sega’s mascot had to make way for a certain blue hedgehog. Did Altered Beast predict his death in 1988? I’ll let you decide.

So here we are, 21 years after the release of Alex’s last game with Alex Kidd In Miracle World DX, a remake of Alex’s first game. Developed by Merge Games (Streets of Rage 4, Spirit of the North) and Jankenteam it was released on June 22nd, 2021 for PlayStation 4, PlayStation 5, Xbox One, Xbox Series X|S, Switch, and PC. How does it match up to the original game from 1986? Read on to find out.

For the purposes of the review, I played this on the PlayStation 4. Also, feel free to check out my review of another retro remake, Wonder Boy: Asha in Monster World here.

As the game starts we are introduced to our titular hero, the enormous-eared, huge-handed Arian martial artist Alex Kidd. There is trouble afoot on his homeworld of Aries (Miracle World) and Alex is having none of it! After the disappearance of King Thunder of Radaxian, it transpires that Prince Egle has been kidnapped by none other than the tyrant Janken the Great. Alex then learns he is the long-lost son of the royal family and sets out on a quest to locate his brother and restore peace to the kingdom. Thankfully, his training in the art of Shellcore has prepared him for this. Shellcore is a technique that enables Alex to enlarge his fists to be able to smash through rocks and decimate anyone in his way. Very ‘handy’!

As is typical of an 80’s platformer, it’s your standard two-button combo of attack and jump as well as the directional movement of course. Movement can be done using the thumbstick or D-pad, I personally prefer the D-pad for games like this, just like in ye olden days. Also, like the original, it is a vertical/side-scroller where you cannot go back at any point, so if you see something on the screen you want, get it there and then otherwise it will be gone forever.

You would think a two-button configuration would be easy huh? Oh hell no! This game was punishing then, and it is punishing now. The difference being if you died in 1986, it was game over…right back to the beginning of the entire game. If anything, I would say it is TOO faithful to the source material. At least in this version, it throws you back to the start of the level giving you a better chance at finishing the game.

Throughout the game, you will be pummeling enemies and smashing blocks that will either contain a power-up, something nasty, or Baums which is the currency of Miracle World. You can spend Baums at the shop to obtain power-ups such as a fire ring, or a motorbike or cyclecopter to reach places Alex wouldn’t normally be able to.

If you beat the game, and that’s a big IF, you will unlock Classic Mode and Boss Rush mode. This is made much easier in the options if you opt to have infinite lives. There are a few additional levels and alternative boss fights but how does the game actually play? The original game was by no means the perfect game, littered with technical misdemeanors. You would think 35 years later this kind of thing would be ironed out, but alas, some are still present enough to make you wish you could knock it back to 1986. I promise you, you will rage and poor Alex will be making many trips to heaven in the process.

Even being able to hit the enemies can be a bit hit or miss with a lack of consistency in hitboxes. In this day and age this is a huge oversight. In the 80’s this kind of thing was expected with technical limitations but it’s inexcusable now, especially working with pixels. This is what I mean about sending you to an early grave, the distance between the same enemy can vary on each attack. Oh, did I mention that there are one-hit kills? With the constant deaths, it could really impede your progress or drive to continue. Even a game of Rock, Paper, Scissors can’t quell the frustration. Though if you lose at that, you will also die!

This is a game I think will definitely appeal to those who don the rose-tinted spectacles, and they will sing its praises for keeping it real. But there is little on offer to draw in a new audience.

It isn’t all doom and gloom though. While gameplay (for me) is the most important part of a game, the graphics have received a fantastic upgrade. The developers have decided to stick with the pixel style and it looks great. They could have easily gone with the cel-shaded style of other remakes, but I think they made the right decision. The world has been reimagined and it dribbles with charm and it feels genuinely pleasant to be in. Add into that you can switch to retro mode on the fly, the aesthetics are undoubtedly the finest part of the game.

In terms of audio, the reimagined tracks from the original game will make you weep with nostalgia right from the first level. They have been very well structurally arranged and the instrumentation carefully put together as to make it different, but not make it unrecognisable. Sound effects are also more than adequate for a remake. There isn’t really much more that could be added except maybe some voice to go along with the text dialogue.

I’d like to say this is skill dependant, but because of the hitbox inconsistency, skill isn’t that much of a factor. It’s more to do with your memory of the original and how much punishment can you take. I finished the main game in about five hours and I died a lot so I would say a competent player could have this done in about 3 hours. Then once you are done this opens up Classic Mode and Boss Rush if you wanted to give that a bash as well.

There is no doubt in my mind that Alex Kidd in Miracle World DX will appeal to all the old-school fans, no doubt at all! Newcomers to the series who didn’t grow up with the gaming pains we had in the 80’s might have a tougher time adapting to the wobbly difficulty curve and one-hit kills. The game looks and sounds great, but it is scattered with 35 year old technical issues that could have easily been addressed. Based on that, I award Alex Kidd in Miracle World DX the Thumb Culture Silver Award.