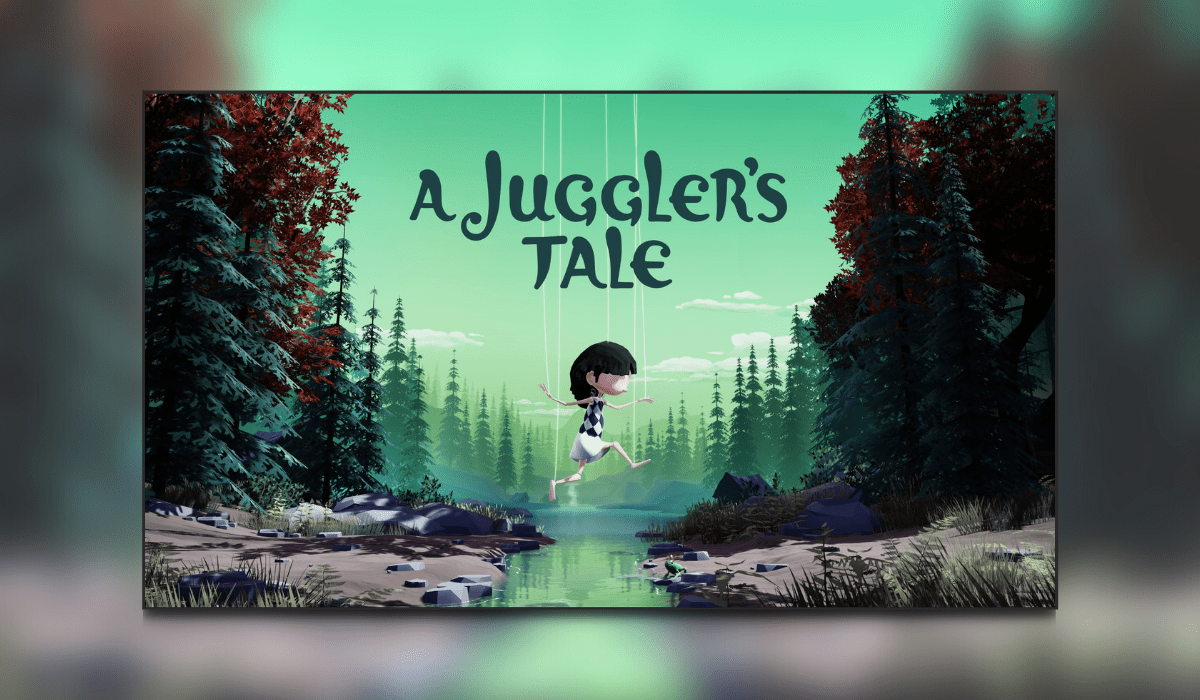 German publisher Mixtvision presents A Juggler’s Tale, the first full game offering from studio kaleidoscube. The team at kaleidoscube have previously worked on award-winning animated shorts along with lending their services to other projects. This experience has clearly informed many of the design decisions taken.

Follow Abby, a circus artiste imprisoned and forced to work for her captors. Abby is a string puppet, controlled by puppet-master and narrator, Jack. With encouragement and a little help from Jack, Abby is able to escape and make her way into the wider world. However, many dangers wait ahead. Join me as we take a deeper look at the game.

A Juggler’s Tale – No Strings Attached

A Juggler’s Tale begins with narrator Jack talking to an audience in a crowded pub, offering them a puppet show to finish out their day. He introduces us to our heroine, Abby, the main character of his story. Once the stage has been set, you gain control of Abby and are introduced to the mechanics.

Whilst presented in a 3D environment, A Juggler’s Tale is a side-scrolling platform puzzle game. Along with sideways movement and jumping, Abby is able to interact with certain objects. She can also throw some of them a short distance; this is used in a couple of puzzles. The most unique element of gameplay is having Abby on strings. This means that she will sometimes collide with objects in her path that would otherwise be out of reach. Adversely, she can become stuck on these obstacles, unable to pass until they are removed. Jack can also use the strings to assist Abby at times – rescuing her from water, carrying her across distances or saving her from falls.

The puzzles presented are rather simple, although not entirely unchallenging. Saying that they do offer a good amount of variety; I never felt like I was overly repeating a similar scenario. My favourite section of the game sees Abby making her way through a dark forest in the pouring rain. She’ll need to find a way to get from brazier to brazier whilst keeping her torch alight. Breaking up the puzzle-solving sections are a couple of chase scenes. These are quite tense and your platforming will need to be good in order to escape your would-be captors. The climax to the adventure, the last big set-piece which I can’t really talk about in detail without spoilers, was a perfect finale.

In terms of the story, it contains dark themes throughout, as you may expect from traditional fairy tales. Imprisonment, exploitation and gaslighting are the main elements Abby faces through her journey to freedom. It’s not all doom and gloom though. There are a few peaceful moments scattered along the way and there’s a couple of canines to interact with, which is always a highlight for me.

As mentioned above, although the game is a side-scroller, giving you just 2 dimensions of movement, it is presented in a fully 3D world. The environments are vast and massively detailed, allowing the story to be developed as much through sight as it is through the words of the narrator.  The developers’ previous experience in animation projects shines through, with the visual (and audio) presentation being one of the main strengths of the game.

The soundtrack is suitably medieval and folksy and serves well to complement the actions and emotions of the story. Jack provides insight and context through his voiceover narration. He speaks in rhymes, which enforces the fairy tale theme of the setting. I found the voice acting to be good quality, and it complimented the action on screen, enhancing the emotions and tension. However, at times the rhyming felt a bit forced.

A Juggler’s Tale is a very short experience. Gameplay clocks in at around 2 hours with minimal replayability completionist-wise after an initial playthrough. That being said, it means that the game doesn’t overstay its welcome and doesn’t become repetitive with the puzzle mechanics or solutions. I would have liked more content, but given this is kaleidoscube’s first game, it seems they have focused on delivering a well-polished experience; quality over quantity.

There’s no doubt that A Juggler’s Tale is going to leave you wanting more. Whether you feel that is down to the game being too short, or just that you would love to spend more time in the world will be personal to you. I fall into the latter category. I’m happy that the game is well structured and very well executed. It’s important for an initial impression of a game and a developer to be strong and A Juggler’s Tale is a fantastic first foray into the world of game development. To avoid spoilers I’ve been unable to delve too deep into certain part’s of the game, but just know that there’s more to the story than you may think. You’ll have to go and check it out! With all that being said, A Juggler’s Tale gets the Thumb Culture Gold Award.