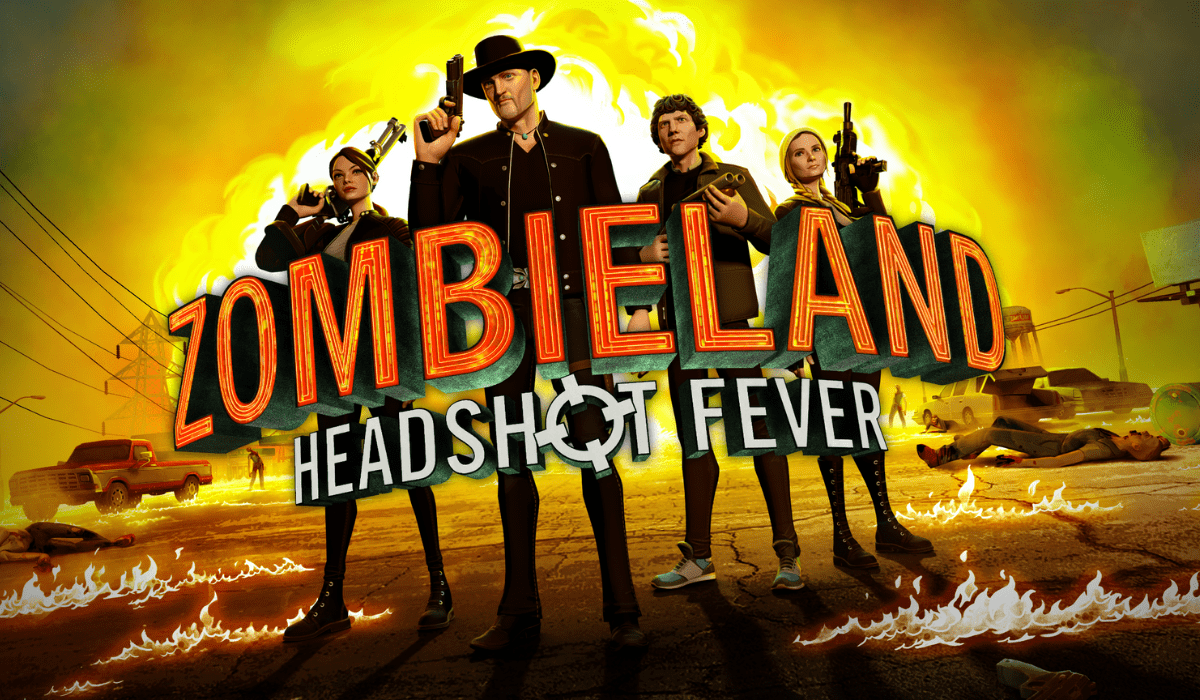 Zombieland VR: Headshot Fever comes from the award-winning XR Games that specialise in immersive VR and AR experiences. Zombieland VR is no different!

The game was released on the 25th March. We were lucky enough to get our hands on a copy for the Oculus Quest 2. So come and join us through our head blasting review. I think you will enjoy this one.

Do you have a top time on a particular run and want to share it? Feel free to comment down below.

Essentially what you get with Zombieland VR: Headshot Fever is a zombie shooting, headshot taking, time slowdown, speedrunning, lightgun style action-packed game where you are rewarded for combos and accuracy. Using the official set of Zombieland rules, and in particular Rule #2, you get a burst of adrenaline if you get 2 headshots in a row, this, in turn, slows downtime allowing you to hit more and more headshots.

Now, this sounds easy, but there is a knack to getting those high scores on the leaderboard. Using the environment to your advantage there are red barrels that you can hit which will take out a few zombies, but you need to be fast, accurate and deadly.

During each level you are given four challenges to beat, these usually range from just completing the level in a particular time, to making it all the way through the level without missing. This adds to the appeal of Zombieland VR: Headshot Fever.

The main aim during your playthrough is to achieve enough of these added challenges to be invited to the Zombieland Invitational, the pièce de résistance of zombie competitions. Once you make it through all these levels that isn’t the end of your time with Zombieland VR: Headshot Fever. You still have a whole host of achievements to work through, which each gives you a specific reward to enable you to hit those quicker times and get faster and faster.

The game is just fun to play, it’s awesome when you are working your way through a run and your split times are all in green, letting you know that your end time will be quicker than previous. However, it is just as frustrating when you just can’t seem to aim and miss those important headshots.

Through the runs, you are introduced to a number of different zombies, from your standard slow-paced leg draggers to your massive monsters. The latter taking numerous headshots to bring that sucker down! Don’t panic though, you are given 2 weapons that you can choose from, your standard pistol which comes with an unlimited number of bullets, to your special weapon. Being anything from a handy shotgun to a nice rapid-fire submachine gun. These special weapons though are limited in their ammunition. So use it wisely.

Zombieland VR: Headshot Fever brings a low poly stylized look to the Quest, and the graphics bring just enough realism but not overly realistic to retract from the real aim of the game. To hit those speed runs. Headshots are gory enough and the zombie models are terrifying when they get too close. I felt the VR Fear a number of times as my screen went red from being nommed on.

Audio-wise you are joined by Wichita, Columbus, Tallahassee and Little Rock. Each voiced brilliantly, even getting Abigail Breslin back involved to voice Little Rock. Unfortunately not the same could be said for the other characters, although Brett Harrelson (brother of Woody) does voice Tallahassee.

Sound effects are bang on for what you would expect Although. I have to be honest and say that the sound almost becomes background noise. Especially, when you are flying through levels in slow-mo.

How long could you play Zombieland VR: Headshot Fever? Well, now that is the question. With each run taking roughly around a minute when you first start this is a game suited to picking up and playing in both short bursts. But, you can easily settle in for those long sessions shooting zombie’s heads.

The real longevity comes when you are trying to improve those times. At the current time of writing Sam on the team currently holds the number 1 time on the Junkyard level. This is the real appeal of the game. Getting high scores give a sense of accomplishment that seems to have been missing from a lot of games in recent times. There is something about trimming times down and trying different methods of killing the zombies.

If I could summarise how I felt about shooting zombies in the head repeatedly this would have been a much shorter review. Zombieland VR: Headshot Fever is just a joy to play. From the moment you start playing through right the way through to carrying out your 100th attempt to beat your own time, the game is just a nostalgic joy. Bringing back those 90’s light fun feels all the way to reigniting the urge to get back to a local arcade and hit the House of the Dead cabinets.

I am pleased to award Zombieland VR: Headshot Fever with a Thumb Culture Platinum Award 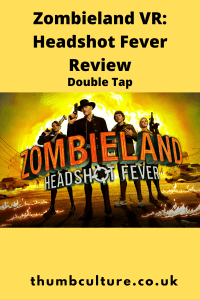