Ever wanted to be a postman? Run your own Post Office? Meddle with peoples post? Well, now you can in Dante Knoxx’s WillowBrooke Post, Published by Excaliber Games and released on Early Access through Steam on 27th March.

Upon starting the game, you receive a letter from your parents asking you to look after their Post Office in the village of WillowBrooke whilst they go on holiday for a year. You catch the next train to WillowBrooke on New Year’s Eve. When you reach the Post Office, you find another letter from your father on the counter explaining your role and duties at the post office, when you continue to explore the rooms, soon after you’re joined by the shy yet friendly Postman Pete who gives you some tips before suggesting you head to bed. 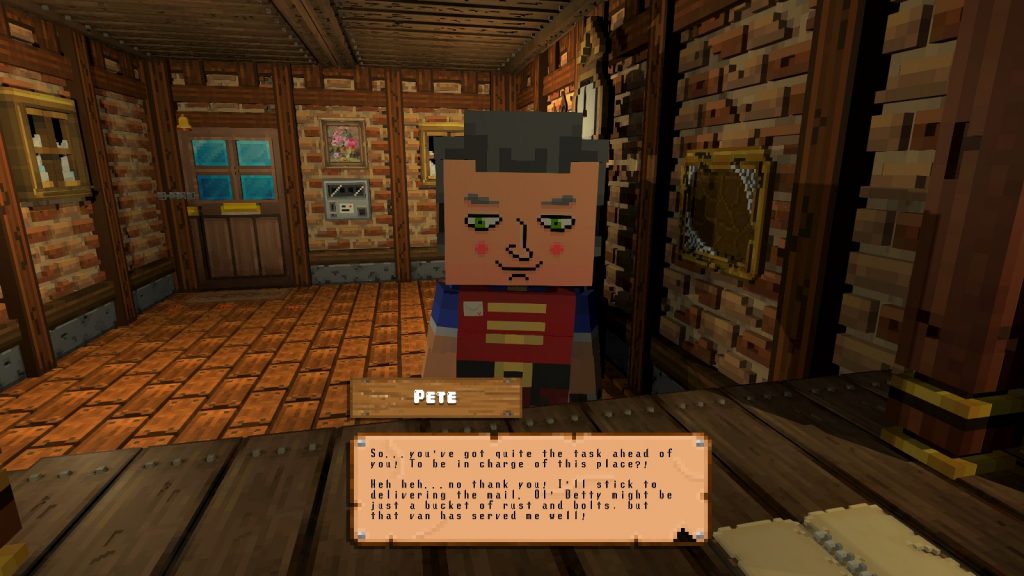 The shy yet friendly Postman Pete.

When you wake up and head downstairs, Pete’s doing his final checks, before becoming distracted by social media. There’s a parcel waiting to be collected, Mail to be emptied from the mailbox and some junk mail and bills addressed to the Post Office and so your day’s work begins. 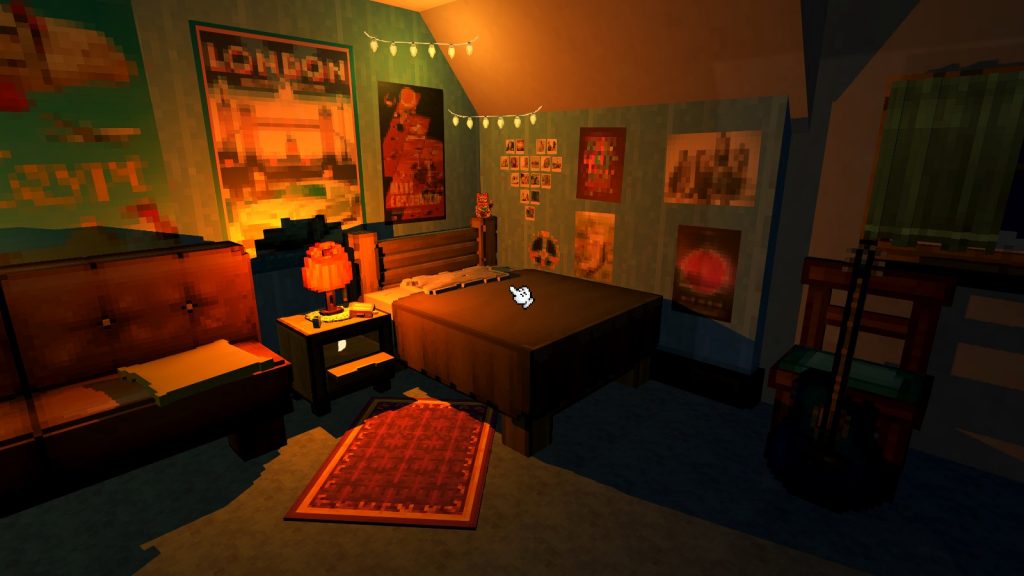 Heading to bed in anticipation of a day’s work.

I’ve played through about 2 ½ hours, with multiple restarts, but still struggle to get past the first couple of days, it is important to remember this is an early access title so won’t be without its issues.

Your first job is to sort out the mail you emptied from the mailbox, this involves stamping envelopes with the correct stamp, There is mail that needs to be hand delivered, unwanted junk mail, overweight or wrongly addressed, as soon as you start sorting through the mail, the doorbell rings and you have your first customer, Magnifique has arrived to collect her parcel, after conversing, you can choose to collect the parcel for her, or tell her that it hasn’t arrived and keep it for yourself. In future updates, it will be possible to build relationships with the people of the village. 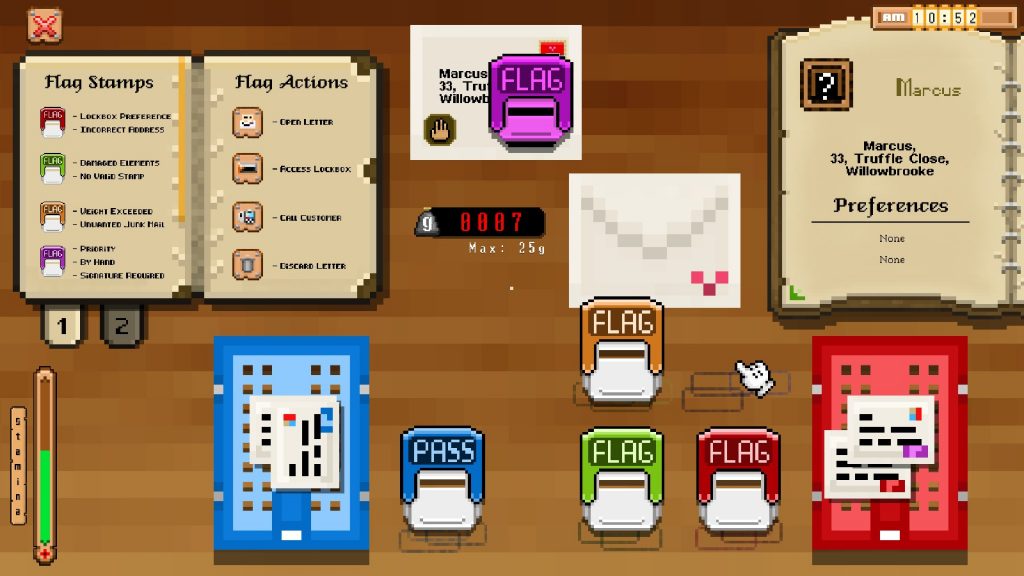 Sorting through the day’s mail.

Some of the text (especially text that gives assistance or instruction) is very difficult to read, the subtitling for the dialogue is clear, but when trying to read some of the instructions when sorting mail or wrapping parcels it is frustrating. The hitboxes aren’t quite right when clicking on some items, you need to click off centre or sometimes a little further to hit the “sweet spot”, again, frustrating. Occasionally windows stay open, blocking the screen and forcing you to restart and there has been the odd unexplained crash to desktop. The game uses a similar save system to Stardew when you sleep at the end of the day. This wouldn’t be a problem if it wasn’t for the mentioned issues, forcing you to replay whole days progress sometimes.

Graphically the game looks great for the style of game, think first person Stardew with the appearance of Minecraft. It adds a certain charm and character to the game and the characters that I have met look modelled well. If the text gets patched soon, then overall it’ll be a great looking game. 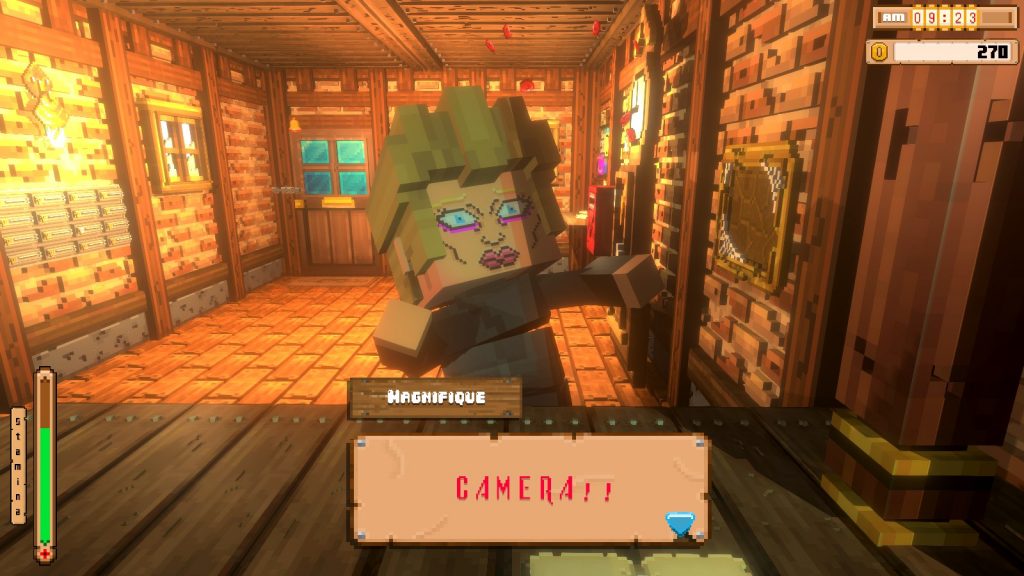 As for the audio, it’s of good quality so far, Sound levels are clear and the npc’s “speech” again adds character and charm to the game.

If you are a fan of Job/Task simulator games or enjoy relaxing to games such as Stardew Valley, then this will definitely, in my opinion, be a game to watch, However in its current form there isn’t a great deal to do, much of the mechanics of the game need improvement.

Personally, I will be keeping an eye on future updates and will be looking forward to the final release.

Disclaimer: We received a code to carry out this preview.

Satisfactory is a game I've been looking forward to trying out since I first ...

A couple of months back, Enplex Games blessed us with some news of a ...