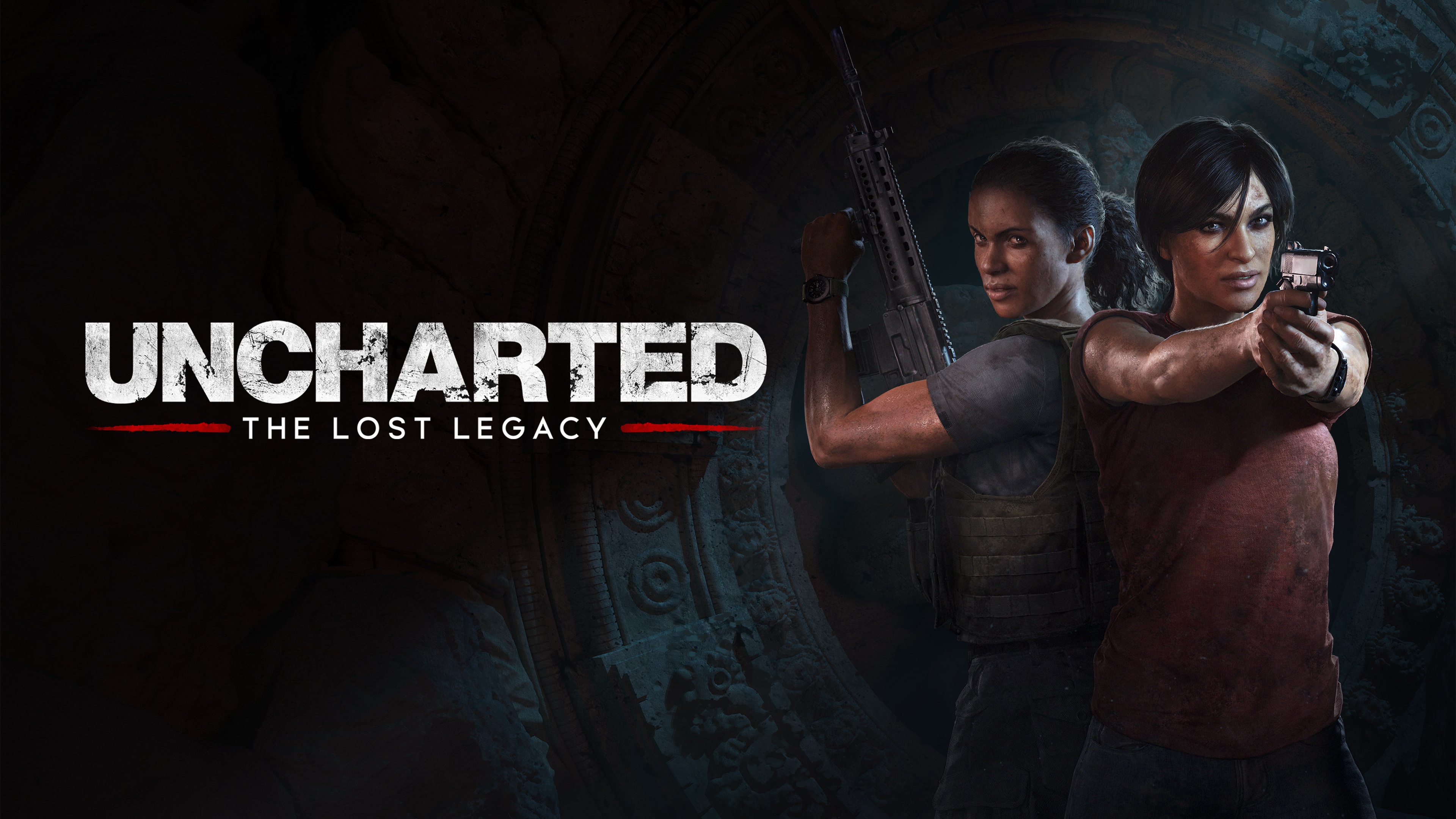 The Uncharted series has been one of Naughty Dog’s finest creations, commercially and critically, without a shadow of a doubt; although I have to give a huge shout out to The Last of Us being on par as well. So after four main games with the brilliant Nathan Drake, one of Playstation’s finest developing partners has decided to expand the series with a new, shorter than normal entry in Uncharted: The Lost Legacy. Only this time, here come the girls. So is it any good? You bet your arse it is.

Nathan who? With “what’s his name” out of the picture, focus shifts to long-time supporting character Chloe Frazer, voiced by Claudia Black with her trademark wicked purr, who we join in the middle of the hunt for the Tusk of Ganesh in a war-torn region of India. In a nice touch for us fans who have played through the whole series, Chloe is joined by Nadine Ross (voiced by Laura Bailey) the South African hard hitting mercenary who takes absolutely no shit and providing a stern and sombre counterpoint to Chloe’s glib nonchalance to treasure hunting. Unfortunately, they’re not alone in hunting the Tusk – so too is Asav, a local warlord destabilising the Western Ghats, who thinks the symbolism of acquiring the Tusk will unite fighters behind him. 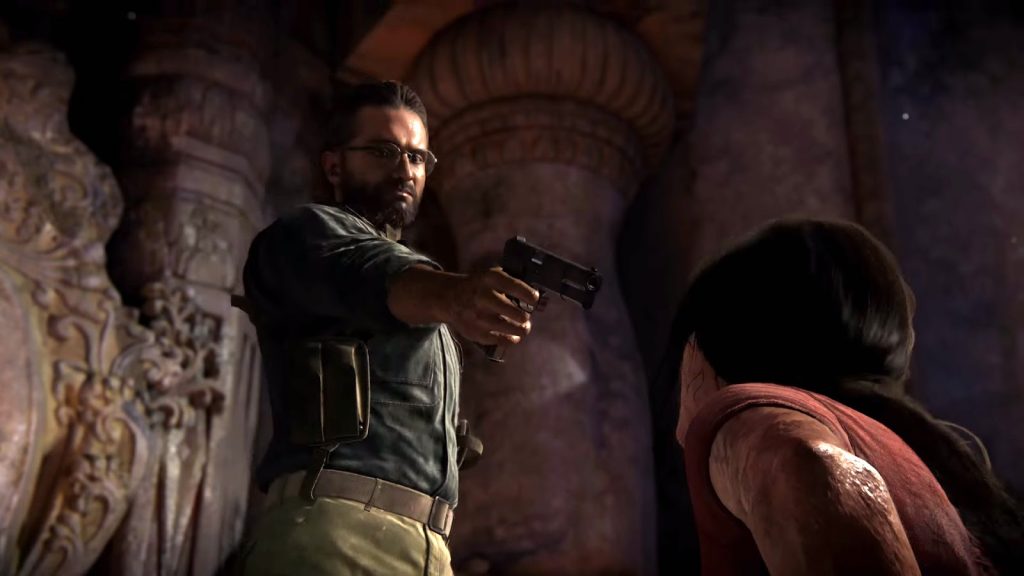 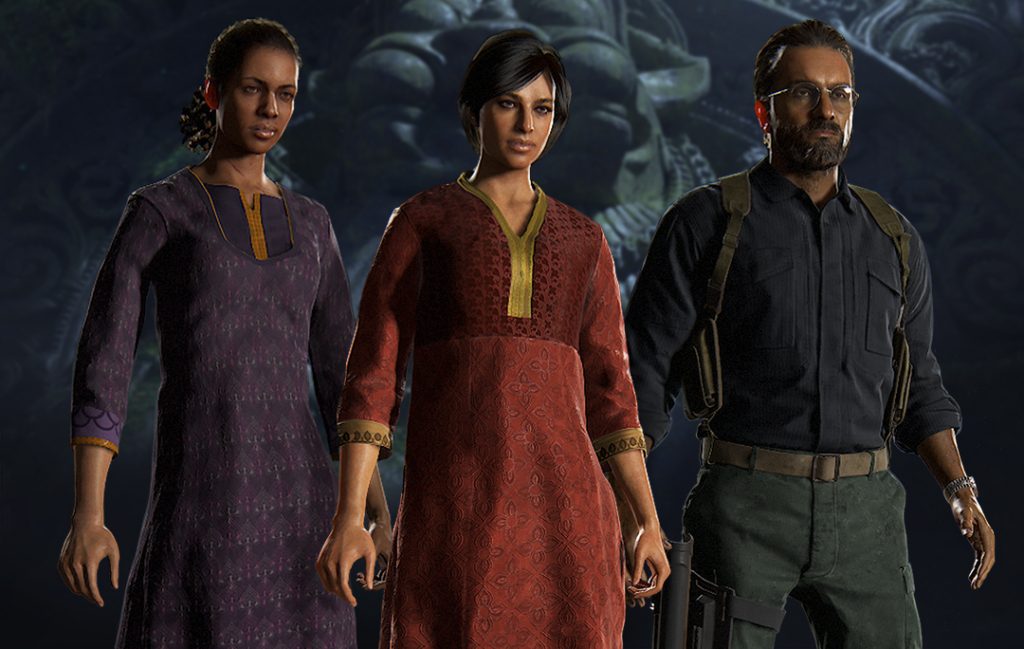 Naturally, everyone has reasons beyond mere avarice for hunting this treasure, but it is still just a treasure hunt, and one that is surprisingly and pleasantly uncomplicated by conspiracy or mysticism. There are lives at stake, of course, because Asav is a huge big pain in the arse with an even bigger ego to boot. In saying that it’s not quite end-of-the-world stuff. The stakes have been lowered a bit to fit the more modest scale of this game, and it suits Uncharted’s easy-going style to a tee. Naturally, what really matters about the setting is the chance it affords Naughty Dog’s designers and artists to build ruins, statuary and mountainous vistas on a preposterously epic scale. The Western Ghats region and Hindu pantheon give them plenty of rich material to work with and boy do they work it! 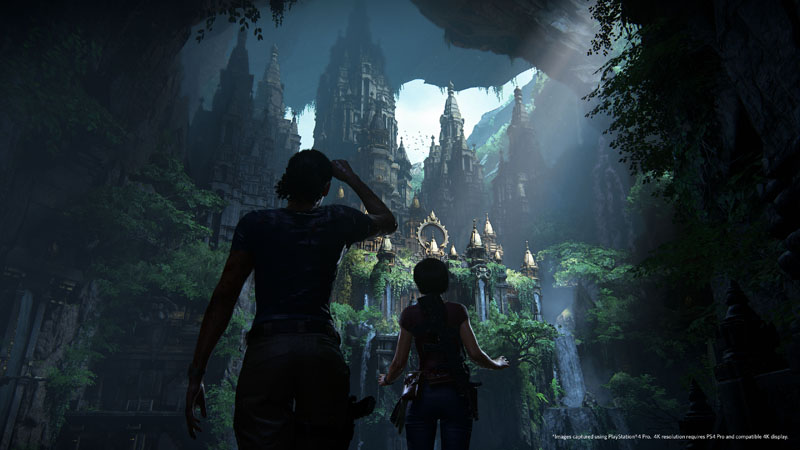 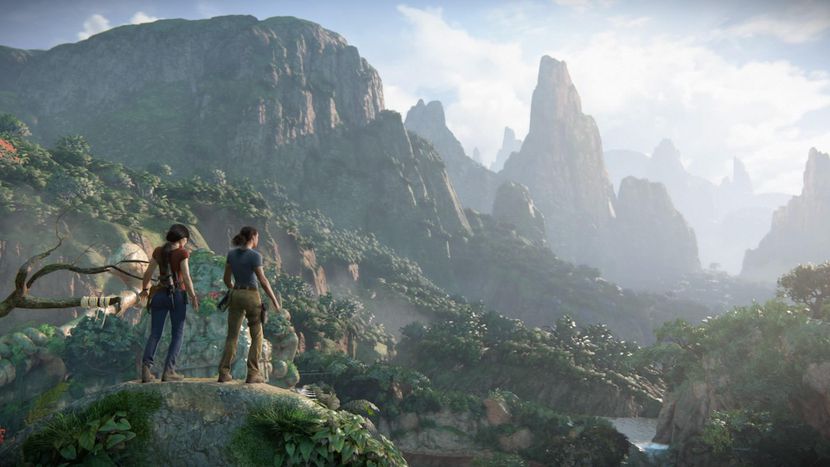 If you loved Nathan Drake’s witty comebacks and sarcastic one-liners, then you’ll be even more impressed with Chloe’s scintillating banter closely followed by Nadine’s distrusting stoicism. After a slightly slow start, Lost Legacy starts to find its feet, growing in confidence and stature as its adventure unfolds. I was treated to some of the finest sights the series has provided amid the breathtaking vistas of Indian jungles and the ornate Hindu architecture of its long lost cities. And within these stunning locales, it finds a delightful rhythm. This is a considerably shorter game than previous Uncharted games, clocking in around 9 hours for me personally, and it is entirely beneficial to its pacing. The scripting of Lost Legacy is nigh on perfect. You’re not expected to suddenly forget how much you previously hated Nadine; instead you’re slowly introduced to new facets of her character, most notably her vulnerability and fear of trusting and relying on anyone other than herself. The developing relationship between Chloe and Nadine is arguably the most impressive aspect of the game, and certainly one that I wasn’t expecting. 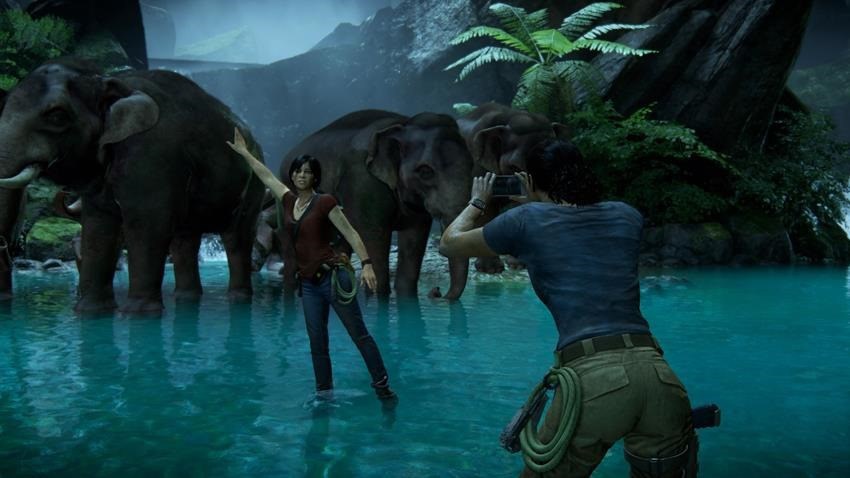 Naughty Dog, for me, have always been the power house of visual delight. Capturing a sigh, a frown or a smile with such realism you forget you are playing a game. Lost Legacy certainly did not let me down graphically. I found myself pausing the game in moments with immense beauty and staring at my screen wishing I could be there myself. This thought is what every game developer needs to ignite in every player, making them want to be a part of the game and believe it; this is no easy task, but Naughty Dog do it with such ease. There’s no doubt that this is a gorgeous game. The Lost Legacy is using much of the same assets and technology that Naughty Dog used for Uncharted 4, which means that it’s still state of the art. From excellent character models and realistic lighting to fluid animations, The Lost Legacy looks excellent. It also showcases the incredible eye for detail that Naughty Dog have come to be known for. Everything from the foliage and ruins to the urban environments and even something as minuscule as the characters’ clothing is incredibly detailed. We’ve come to expect an obsessive attention to detail in Naughty Dog games, and The Lost Legacy doesn’t disappoint. 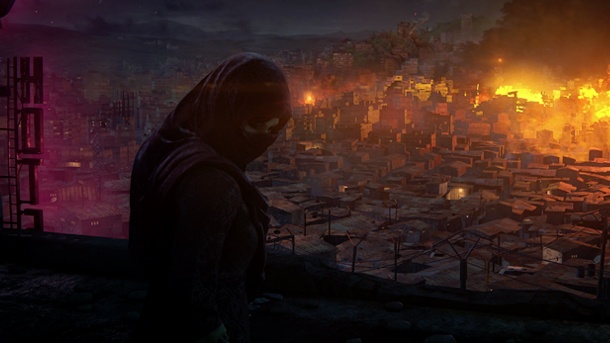 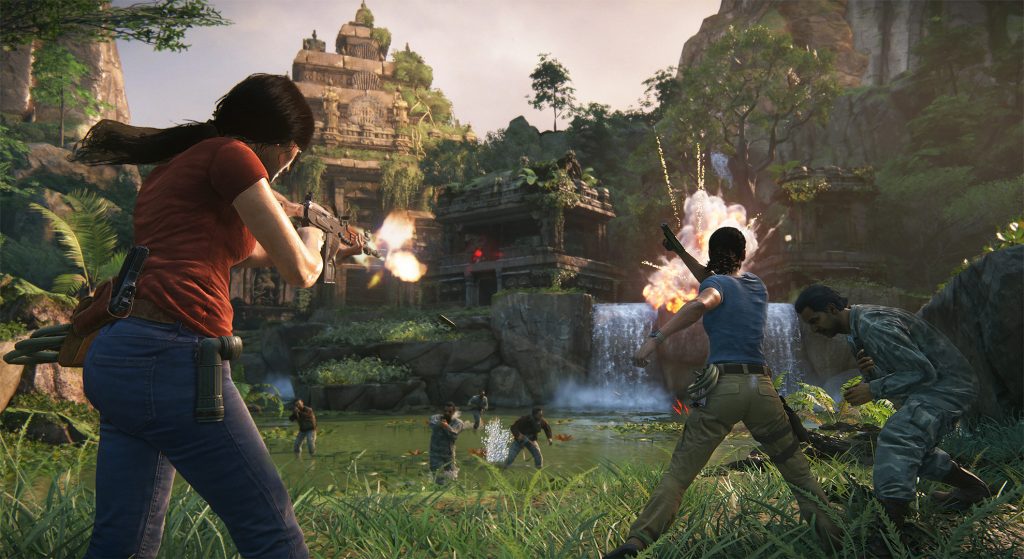 Music in a game is a huge factor for me and probably most people. It can tell a story by itself when done right and of course, again, Naughty Dog put an extreme about of thought into each note. The soundtrack in Lost Legacy is composed by Henry Jackson, though known by some for his producing, programming, and writing work in the pop and electronic realms, Henry Jackman is best known as a film composer for action and animated features such as X-Men: First Class, Big Hero 6, and Captain America: Civil War. Instead of me telling you how the music is in Uncharted: The Lost Legacy, why don’t you have a listen yourself and feel the immersion. If you close your eyes at the right moments, you’ll feel like you’re smack bang in the Western Ghats yourself!

If you’re like me and strive (sometimes unsuccessfully) for that platinum trophy, then you’re in luck with Lost Legacy. I found myself wanting to go back after I completed the game to find all the treasures and also complete it on different modes, crushing being one of them. You will find yourself wanting to experience Lost Legacy over again, not only for that platinum, but how it made you feel while playing it; those funny moments, exploring that temple one more time or taking even more pictures on your smart phone of the stunning scenery. Not forgetting the decent online multiplayer where you can hop straight into the action. There is no doubt that Lost Legacy will have you coming back to it more than once. 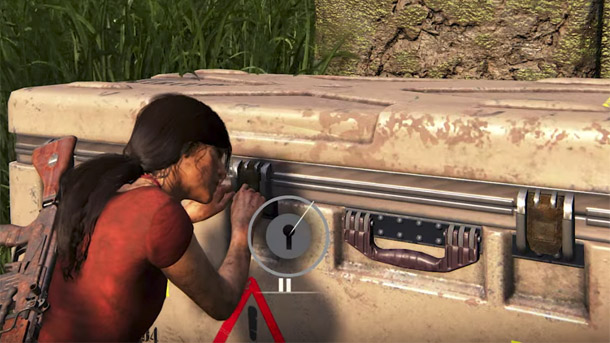 Being a huge Naughty Dog fan I can’t tell you how excited I was to play this, but I also had my doubts if this would flow as well as previous Uncharted games. Silly me! I should know by now that anything Naughty Dog touches turns to gold. I can honestly say that I didn’t want this game to end. It was a beautiful journey taking me on another scenic spin down the Uncharted lane. Lost Legacy tells a winning tale of friendship set against a backdrop of gorgeous mayhem, and it might even teach you a thing or two about Indian history along the way. I have no qualms about awarding Uncharted Lost Legacy a meaty “Nathan Who?” Thumb Culture Gold Award.