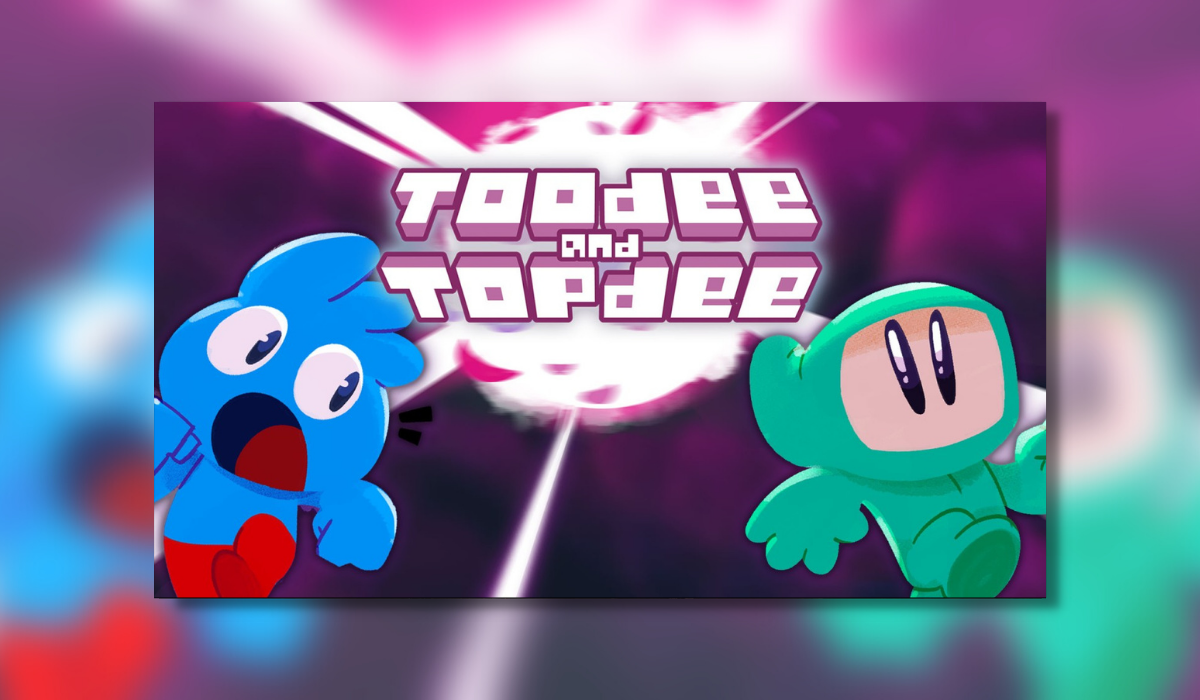 Developed and published by Dietzribi, Toodee and Topdee is a 2D platformer that also uses top-down perspective puzzles to give it an extra twist. It was first released on PC back in August 2021 and then now it has been released on the Nintendo Switch. Will we get ourselves in a tangle in this Toodee and Topdee review?

They say that puzzle games are good for the brain. Yet while there are some puzzle games out there that stimulate the brain, there are also others that just leave you frustrated and question why you play games in the first place. But Toodee and Topdee’s got platforming elements in it and you can’t go wrong with platformers, can you? Well, let’s find out, shall we?

Toodee and Topdee tell the story of 2 little cute creatures that have been tasked with restoring balance to the universe. The game is a hybrid of a normal platformer but also a 2d top-down perspective. Imagine Super Meat Boy but with a little buddy helping you, because the platforming is so much like Super Meat Boy it’s uncanny.

If puzzle games aren’t your bag then this game is definitely not for you. Puzzles are the main aspect here and wow do they really get your brain matter turning. Each level is only a one-screen puzzle but don’t let that fool you. Every level has a key and a locked door and you need to alternate between the 2 characters to open the door.

It’s just like every other game where it will hold your hand in the first few levels but after about 10, the difficulty really ramps up and tests your problem-solving skills. Toodee is your man to most of the platforming, in the way a normal platforming game would. Then when you can’t progress any further that’s when you need to switch over to Topdee. He’s the 2D top-down perspective guy who can build bridges for you or help you by any other means necessary.

I love when indie developers think outside the box and implement different ways to complete a level and it’s done perfectly here. The only problem I find is the difficulty. There is an option to turn the difficulty down to make it somewhat easier but it’s still hard as nails. Now I love a good challenge in a game. I have completed some of the hardest levels known to man in Super Mario Maker. I have done things in a game that a TAS Bot would be proud of but Toodee and Topdee hits a whole new level of difficulty. So be warned.

The graphics are great and I am a huge fan of the pixelated graphics, bringing back the days of the good old 8bit systems. The colours stand out and it looks great on the handheld Switch. I actually prefer using the handheld rather than using the television. Alternating between the two characters looks good and you can easily tell them apart and what your objective is to complete the level.

The audio on the other hand is just a little too blah for me. The audio and soundtrack in all indie games seem to be a bit of hit or miss lately. I’m not saying the audio is bad but it just doesn’t click with me. After 10 minutes or so you will want to turn it down and put some music on in the background to get you in the mood.

Longevity on Toodee and Topdee is all down to how good you are at puzzle games. While the game has roughly around the 8-hour mark to finish. That 8 hours can easily turn into 8 days. There isn’t really much in the way of extras so it’s just the main game where all the playtime is. A level can take you maybe 60 seconds and then later on they can get frustratingly long. Which is crazy for one screen puzzles. With six chapters and plenty of levels in each one. There certainly isn’t a lack of content.

My Final Thought towards Toodee and Topdee is that while I admire the developer’s vision with it. I just can oversee the difficulty as sometimes it is just so painful. But puzzle games aren’t really my thing and while I spent numerous hours on it, I just didn’t have that spark that I get when playing other games. If puzzle games are your thing then this will definitely be for you.

So with that in mind, I am going to give Toodee and Topdee the Thumb Culture Silver Award.