What do a zombie, a velociraptor and a laser firing robot have in common? You are going to kill them all in Wales Interactive’s wave shooter with attitude – Time Carnage

Coming out this week on PSVR, Oculus and Vive Time Carnage is a frantic wave shooter which specialises in its variety of weapons and change of locations. Wave Shooters are common on VR systems. As a game environment VR struggles to simulate natural movement and as we have seen in recent games like Bravo Team, failing to get a movement system right can damn your title’s chances of success and have it heading to the bargain shelf of your local CEX store quicker than a Kevin Spacey movie.

So if you can’t do movement well, create a game where you don’t need to move. Although there is no back story to Time Carnage, the premise is pretty straightforward. You travel through time in a giant bubble landing in a shower of sparks as it slams into the ground. As the protective sphere clears you are faced with your home for the next 15 minutes as ten waves of various enemies come running towards you.

An invisible shield surrounds you, which becomes apparent when an enemy hits it and once that shield is depleted, you have a health bar that goes down with each attack. No shield and no health means you’re dead. Pretty standard stuff for a wave shooter.

But luckily Wales Interactive don’t expect you to fight off hoards of enemies with your bare hands. As you progress through the game you unlock a range of weapons, from pistols and submachine guns, through to grenade launchers and laser rifles.

Before each time zone you get to choose 4 guns which are available to pick up from its own pod that are placed around you when you spawn. You dual wield all weapons giving you a good range of munitions in each round and to reload the gun, you put it back in the pod and grab another. There is no backstory or reason given for why you are travelling through time killing creatures left right and centre. The gameplay is simple: arrive, arm yourself, kill everything and then do it again. 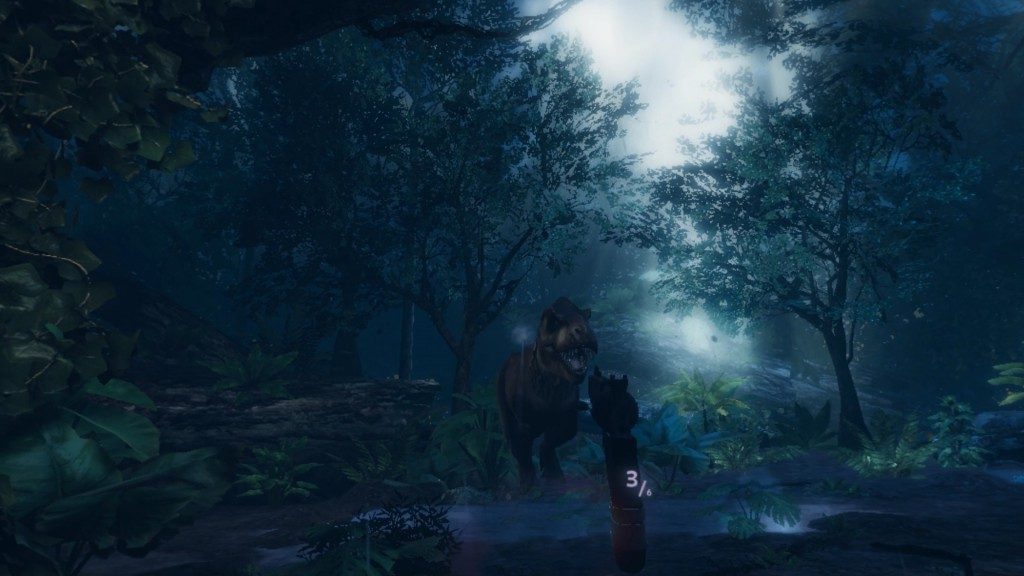 Played on a standard PS4, the visual experience keeps up with the action, some of the levels are dark on PSVR, but intentionally so, and the Mesozoic jungle levels are well-lit and presented. The range of enemies is good and they all move well around the environments before heading towards you to attack. As the levels progress the range and number of enemies increases, so that by the tenth wave of each round, you can have over a dozen of them trying to kill you, still no judder. The environments hide any issues around pop in and they all seem to come from logical places with no draw distance issues apparent.

AT certain points of the game a Time Paradox appears, a glowing light which when shot will slow time down for a while. Disappointingly, this highlights the individual frames of the characters animation. It doesn’t feel like time slowed down. It feels like it has hiccups. 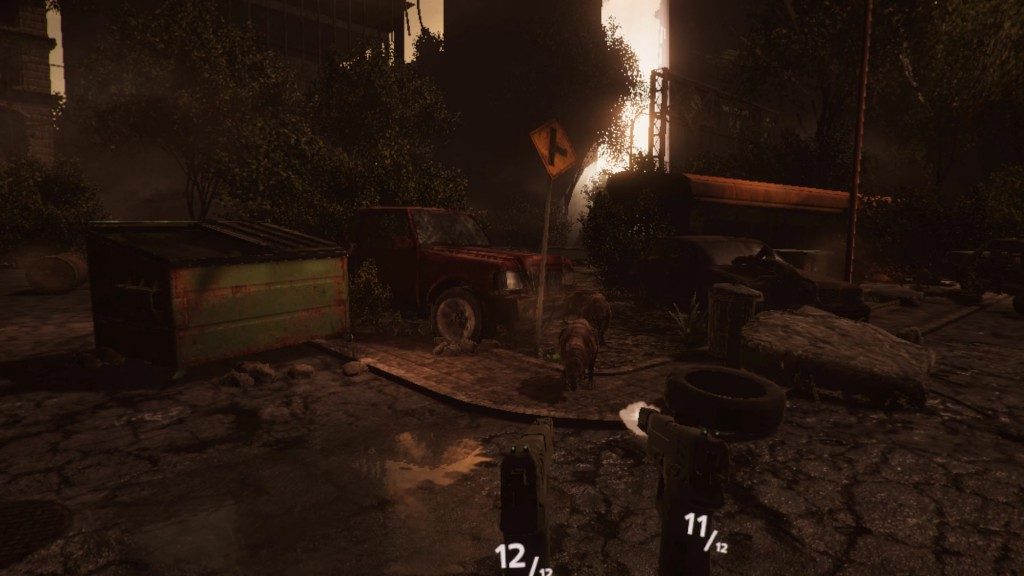 The audio on this game is a real mixed bag. After travelling through time and space, your time machine slams into the ground with a thunderous boom and the screen clears in a shower of sparks to put you in your new reality. The effect is excellent and quite immersive.

Time Carnage has a great range of weapons and are really the game’s most unique point, but the sounds associated with a lot of them are a bit lame. Handguns and assault rifles give an underwhelming crack as you fire them, it feels like they all need turning up a few notches. The haptic feedback through the move controllers works well, and the gun animations are good with spent rounds pinging off into the distance, muzzle flash on each shot and you can see trigger move as you squeeze it. But without the noise to accompany it, the whole effect is lost. 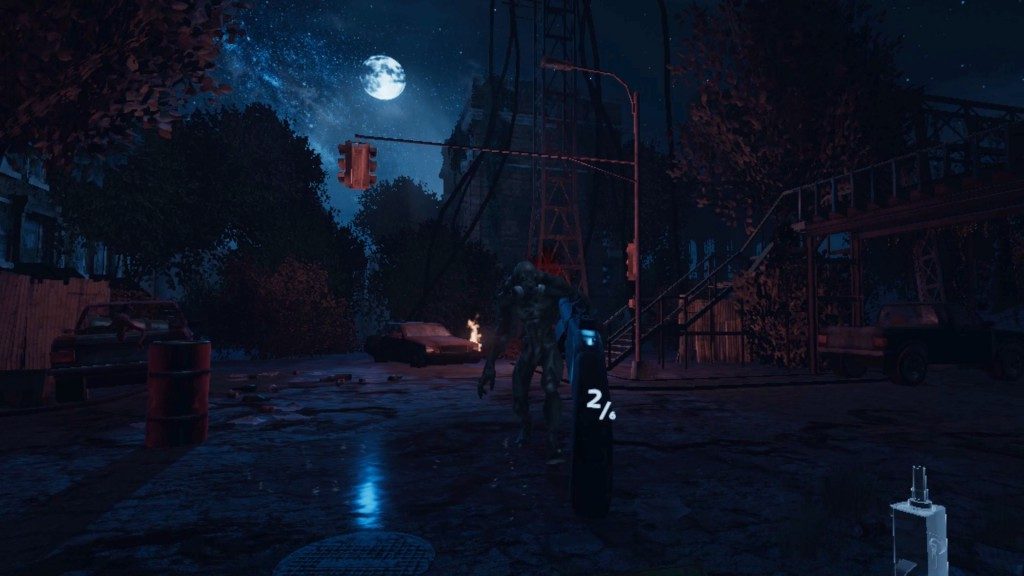 Each of the four-time zones have four different locations, each with ten waves so there is plenty to see and do in Time Carnage. There are checkpoints along the way, so if you die, you don’t have to replay from the start. Even the early levels will take a good ten minutes to clear, so there is a lot of gameplay to get through. There are challenge and arcade modes to play through as well where you can unlock perks to mix up the gameplay a bit. Because there is no free movement, there are no motion sickness issues. It’s comfortable game to play and very reminiscent of the arcade game Time Crisis, but in VR, and with a sack load of guns.

Each of the locations and time zones are distinctive and the guns all feel different, so if you like wave shooters there is a lot to get into with Time Carnage. It plays well and looks good, but the environmental and firearm sound effects don’t reach that same standard and with an immersive experience sound is really important. As a game that puts weapons at the forefront of its appeal, there is not enough of a reaction from your foes as you shoot them.

There is a rewarding “kerching” noise as you head shot, but otherwise no effect from where you choose to aim. The more powerful your gun, the more they get thrown back, but regardless where you shoot them they all die the same.There seems to be wave after wave (ironically) of wave shooter titles coming out for VR systems currently and Time Carnage is definitely one of the better ones.

It is worthy of a ThumbCulture Bronze award and well worth a play at the price point it has been given.

Chernobyl Project published by The Farm 51 Group is a Virtual Reality experience that ...

For those of you who have played through this game, you’ll realise that the ...