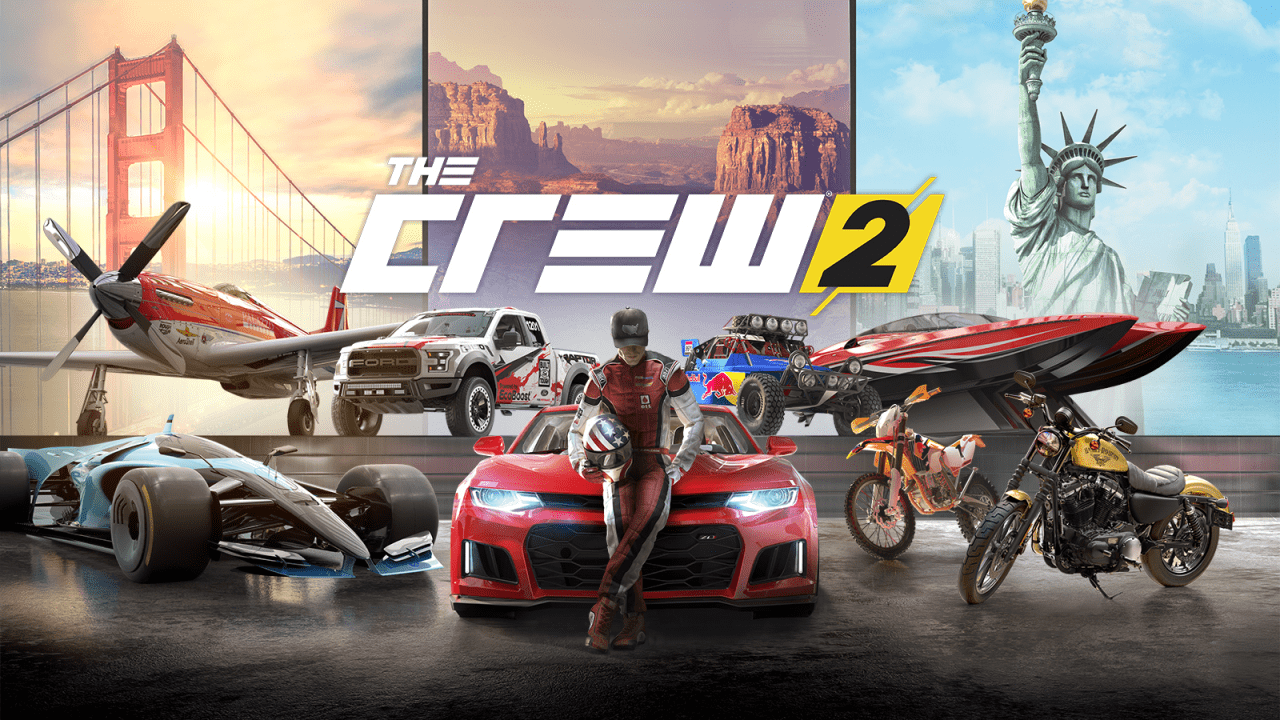 After spending a lot of time with the first instalment of The Crew, when we got the opportunity to review The Crew 2 I jumped at the chance. After spending a little bit of time with the closed beta recently I was however, a little deflated. Something just wasn’t right with the game, a few things just felt a bit off. Thankfully with the final game we get a much more finished article. Let’s start the engines and see where it takes us.

The game throws you into one of the extreme events that you have through The Crew 2, giving you an insight into what kind of game you are getting yourself into. This first toe dip is a great experience and definitely shows off the multitude of vehicles that will be at your disposal. Once you have finished this example though its time for you to be let loose on the USA and get to grips with The Crew 2 once and for all.

You start the game being able to chose from a small selection of cars and then are released into the open world of The Crew 2. The massive, huge, ginormous open world that makes up the major landmarks in the United States of America. 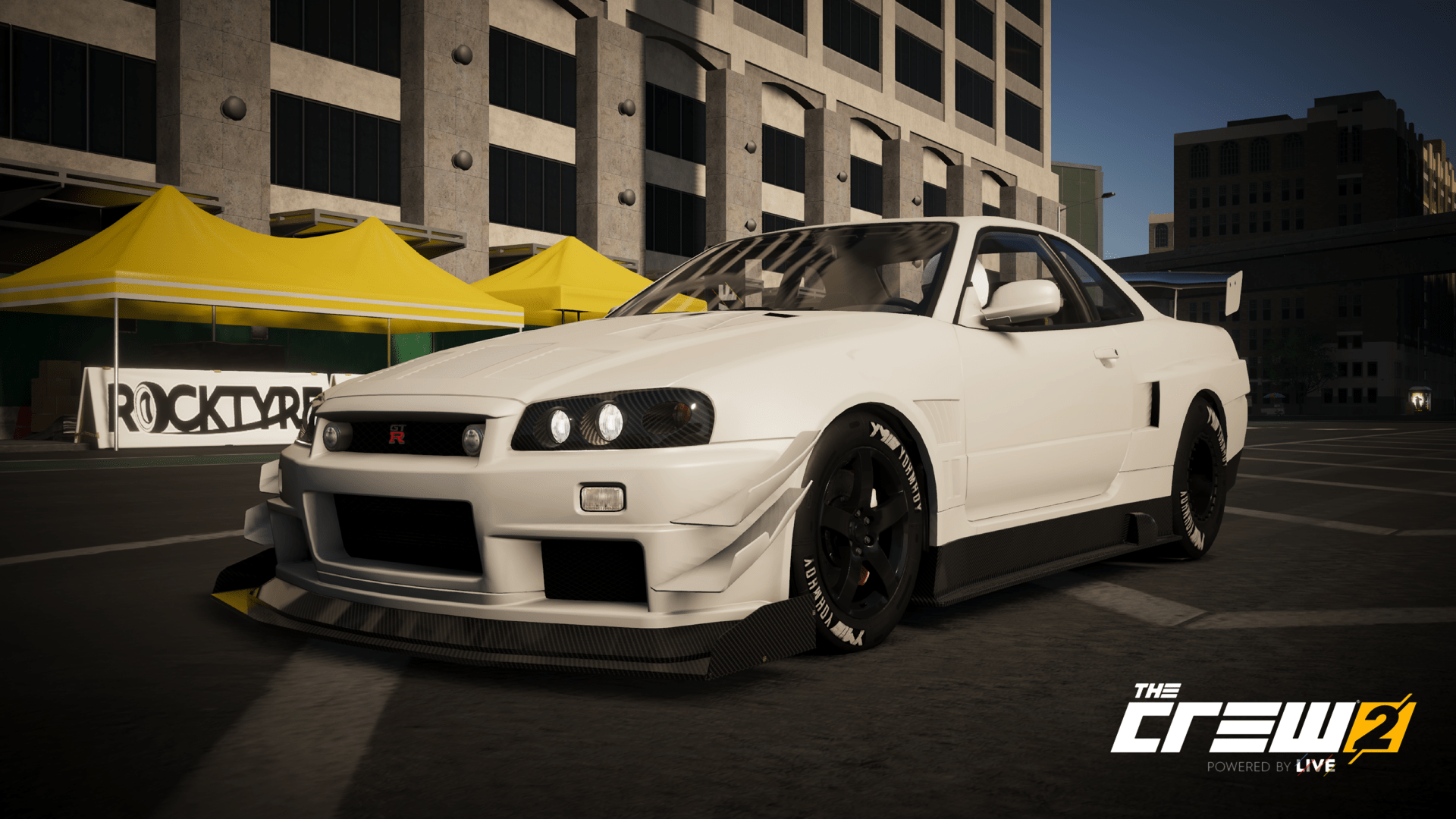 Opening up the map gives you your first look at the four motorsport families that you will be competing alongside and against through your time with The Crew 2. Offroad, Freestyle, Street Racing and Pro Racing all adorned in their own colours for you to quickly and easily see which events are linked to which racing family. Progressing through these open up different opportunities throughout your career, including some amazing “boss” races against some of the icons of the motorsport family.

The main way that you will progress through The Crew 2 is through racing, now that may be on the the land, sea or even in the air. With some of the most varied vehicles in a racing game, you could one minute be drifting around tight corners in your Mazda RX-7, and then just as quick carrying out death defying loops in the air in a Freestyle event. The choice is totally yours.

With no obvious story line other than to be the best racer out there, you are left to do things how you would see fit. If you want to jump from event to event ranking up and getting more and more fans, unlocking everything as you go? Not a problem. However, if you want to just take in some of the astounding scenery throughout the game and drive some of the mountain roads, or even take in some iconic monuments, such as the Statue of Liberty, Las Vegas, and even Mount Rushmore, then just head out onto the open road. 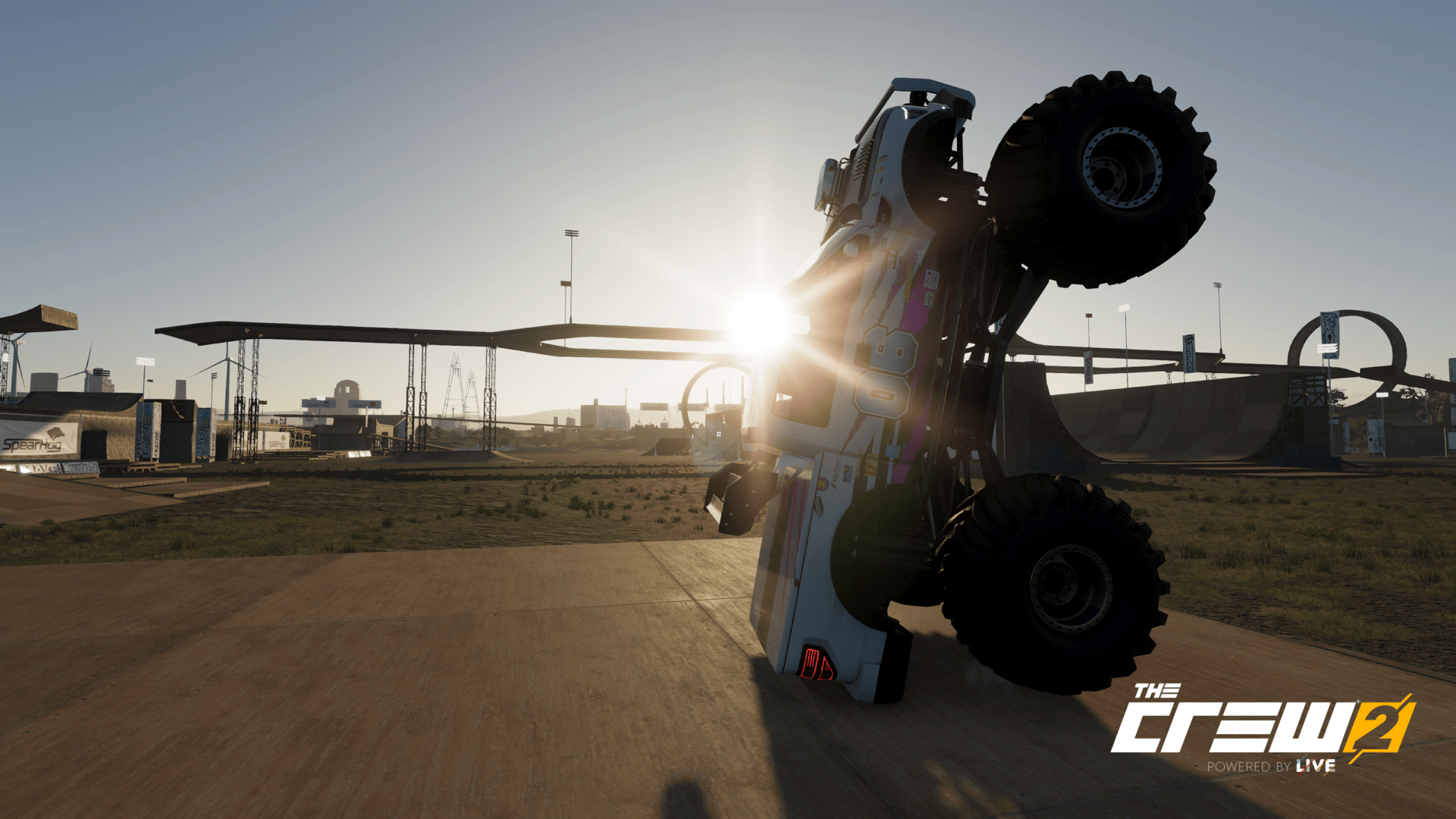 Improving the performance of your vehicles couldn’t be easier. Using a similar method to the first The Crew, you race or carry out one of the many skill events throughout the country and you are rewarded. You are rewarded with fans, money, and parts. These parts take the form of bright balls on the ground, simply drive over them to pick them up, then go into your car selection screen and right there you can add these new performance parts on the fly. There are a few different types to play with. You have the standard green which just give a boost in some of the stats depending on the part. Then you have the blue and pink parts. The blue comes with one bonus element to it and the pink come bundled with two. These bonus’ could be anything from increasing the luck of receiving a high value part, an extra percentage of winning bucks, or even giving your boost an added recharge rate. There are a multitude of combinations that you could go for, alternatively you could just rank your car up to be as fast as possible so that nobody can keep up with you. The choice is once again, totally yours.

So these fans that we mentioned. These are your way to unlock the different disciplines or racing in each of the motorsport families. For example, in the freestyle family you start off with the nice and straight forward Freestyle air events, getting as many points as you possibly can, get enough fans to bring you into higher ranks and you eventually will unlock the monster trucks, giving you an arena full of jumps, loops and steps to try and get as high points as possible. Its the same progression for the other families. Pro Racing covers boat races, all the way to open wheeled monsters, Off Road covers Raid vehicles through motorcross bikes. There are literally hundreds of different vehicles to choose from.

So build up those fans, unlock those extra disciplines and eventually you could be riding around in your very own hovercraft! 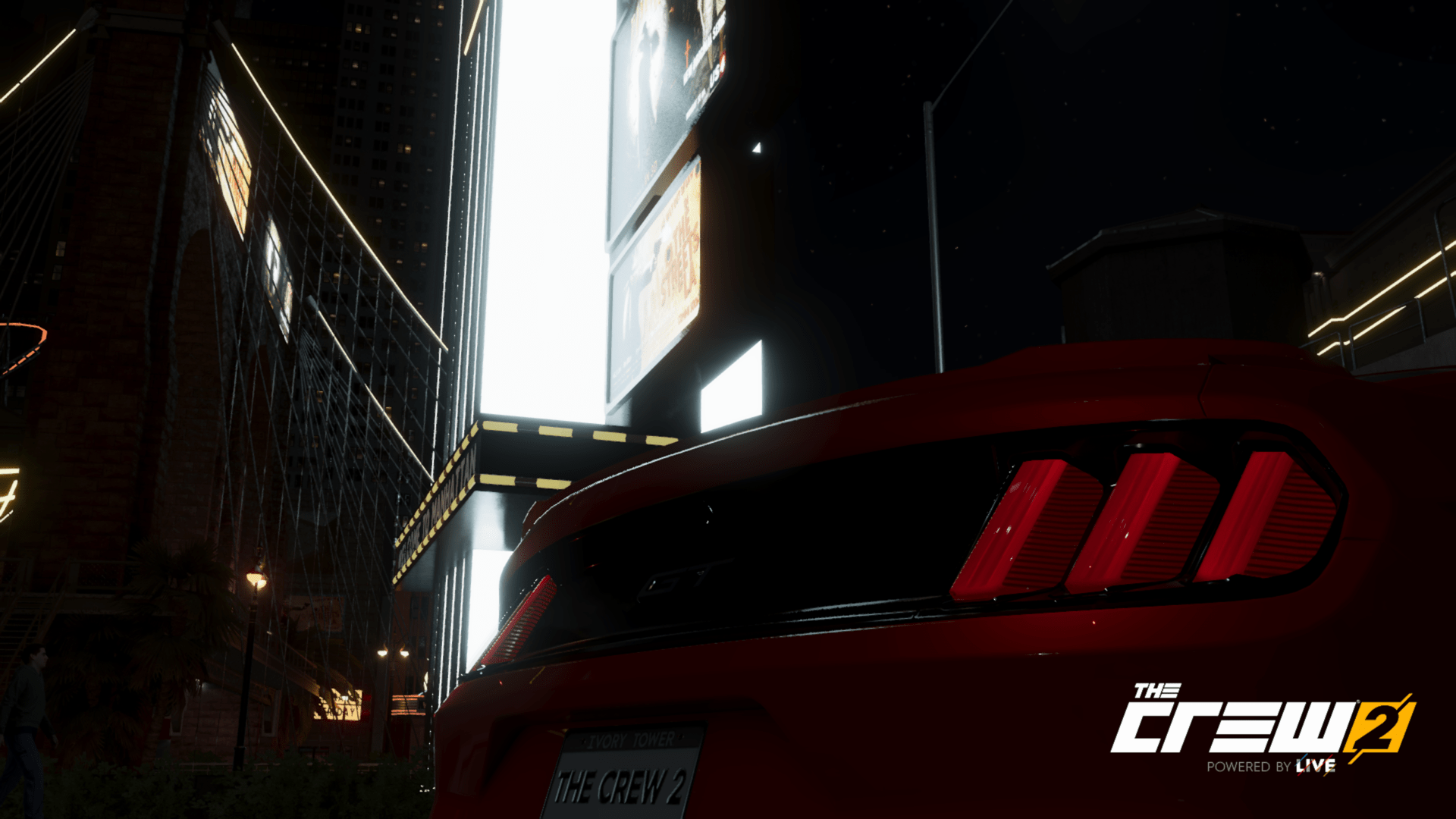 The game allows you to team up with your friends and take on records, races, or just put a marker on the map and see who the first person to get to the goal is. You create your own story, which seems to be the norm is a lot of open world games these days. With only a few events unlocking at a time you are able to manage what you want to do. Spend an hour just racing the drag races in your souped up Nissan Skyline, or drive sideways through the narrow lanes in a Rallycross car. The main thing that you need to remember is that everything should be fun while you are playing The Crew 2.

Once of my favourite things to do in The Crew 2 is to take photos. The photo mode is brilliant, and with the scenery that you can drive around, you can get some truly stunning results. The images used throughout this review have all been taken by myself using this photo mode.

My only problem with how the game plays is probably when it comes to collisions with walls, when driving around and you hit a wall you pretty much bounce off to a certain degree. A slight graze on the wall reveals some sparks, but anything more seems to bounce you off into the centre of the track. Now I know that walls are to be avoided at all costs, but this just gives more emphasis that this is 100 percent an arcade style racing game.

Now onto the impressive graphics on the game. Playing in 4K on the Xbox One X is incredible, the car models are so smooth and the surrounding environments are amazing….until you get up close. The textures are definitely designed to be viewed from distance, move in closer in one of the arenas and you get a blurry mess. Now as this game is designed to be played at high speeds and from a distance from the walls, you can forgive Ubisoft for not putting that right. 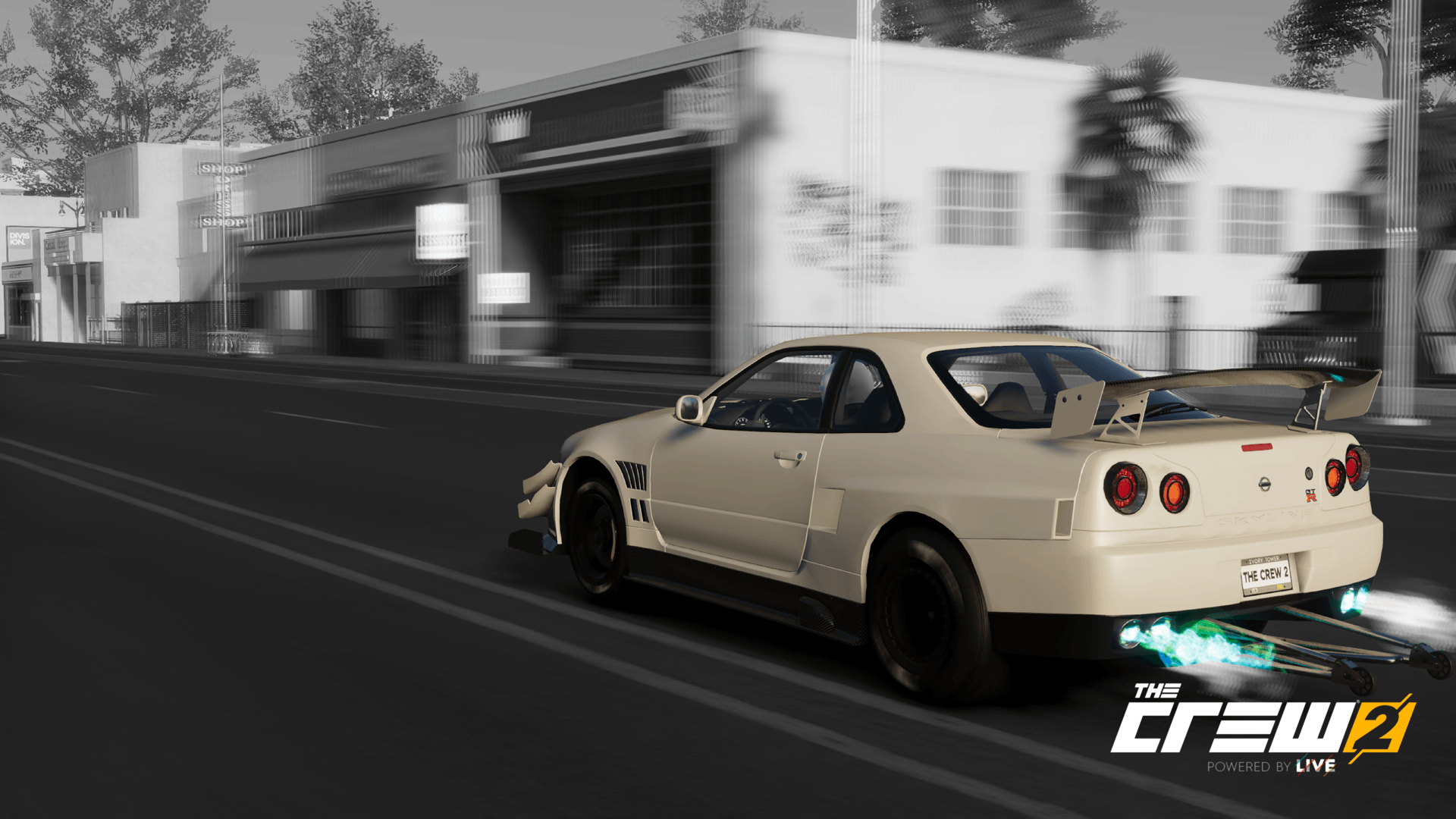 When flying around in the air you get to see some of the most amazing vistas, from cityscapes to forests, they are all accurately generated and its beautiful to watch as you are carrying out loops during a freestyle event. Even then on the water, the water effects are brilliant.

Soundtrack…check….vehicle sounds….check. Everything that you need in a racing game is here. The sound of your engine changes depending on what vehicle you are driving. I’m even sure my engine note changed when I installed a fly catcher on my Mustang. You wont be disappointed here.

Here is the main question, how long will you be playing The Crew 2? Well for quite a while I expect. There is so much to do throughout the game, from all the races that are available in both normal and hard difficulty, adding that extra spice to your races. To all the skill events dotted around the map for you to take part in.

On top of that the ability to drive around with your mates and show off all your amazing rides. The Crew 2 could be played for quite a while.

So overall with The Crew 2 bringing a whole host of vehicles to a racing game it could have been an ugly mess. Fortunately Ubisoft have seemed to get the balance just right.

The Crew 2 from Ubisoft received the Thumb Culture Gold Award.

Disclaimer: We received a physical copy of the game to carry out this review