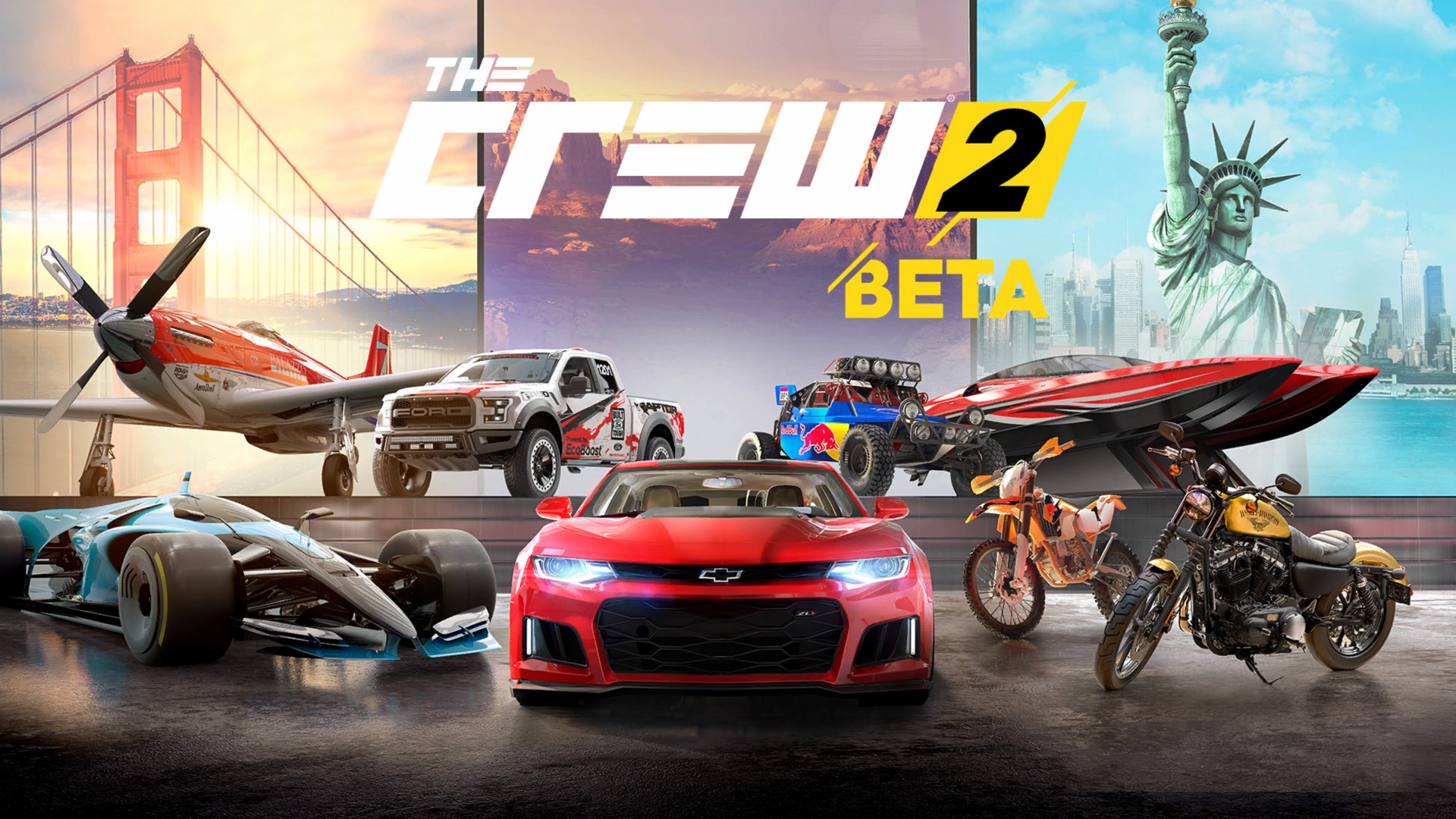 Well thanks to Ubisoft that was a very busy weekend!  For those of you not lucky enough to receive a code to the closed beta for eagerly anticipated The Crew 2, sit back and have a claw through my review to read some of the highlights to be had.

Ubisoft have definitely taken their game up a notch since the first Crew hit consoles back in Christmas 2014.  Back then I played the beta and I wasn’t massively impressed to be honest as you sought to take out revenge for the killing of your brother by infiltrating a gang.  Yes open world driving was pretty fun but I couldn’t get on with the physics of the cars and to be honest despite the cool google map style zoom in from map to ground level when playing, the graphics just didn’t do it for me, especially when compared with similar large open world offerings such as GTA 5.  Despite my negativity towards the first Crew game, it did end up in our games pile as a Christmas present for one of my children who absolutely loved it.

This weekend I was joined by my children who at 9am on Friday morning all sat around the living room patiently awaiting for the servers to unlock at Ubisoft HQ so that we could be some of the first to have a play.  We were not disappointed! 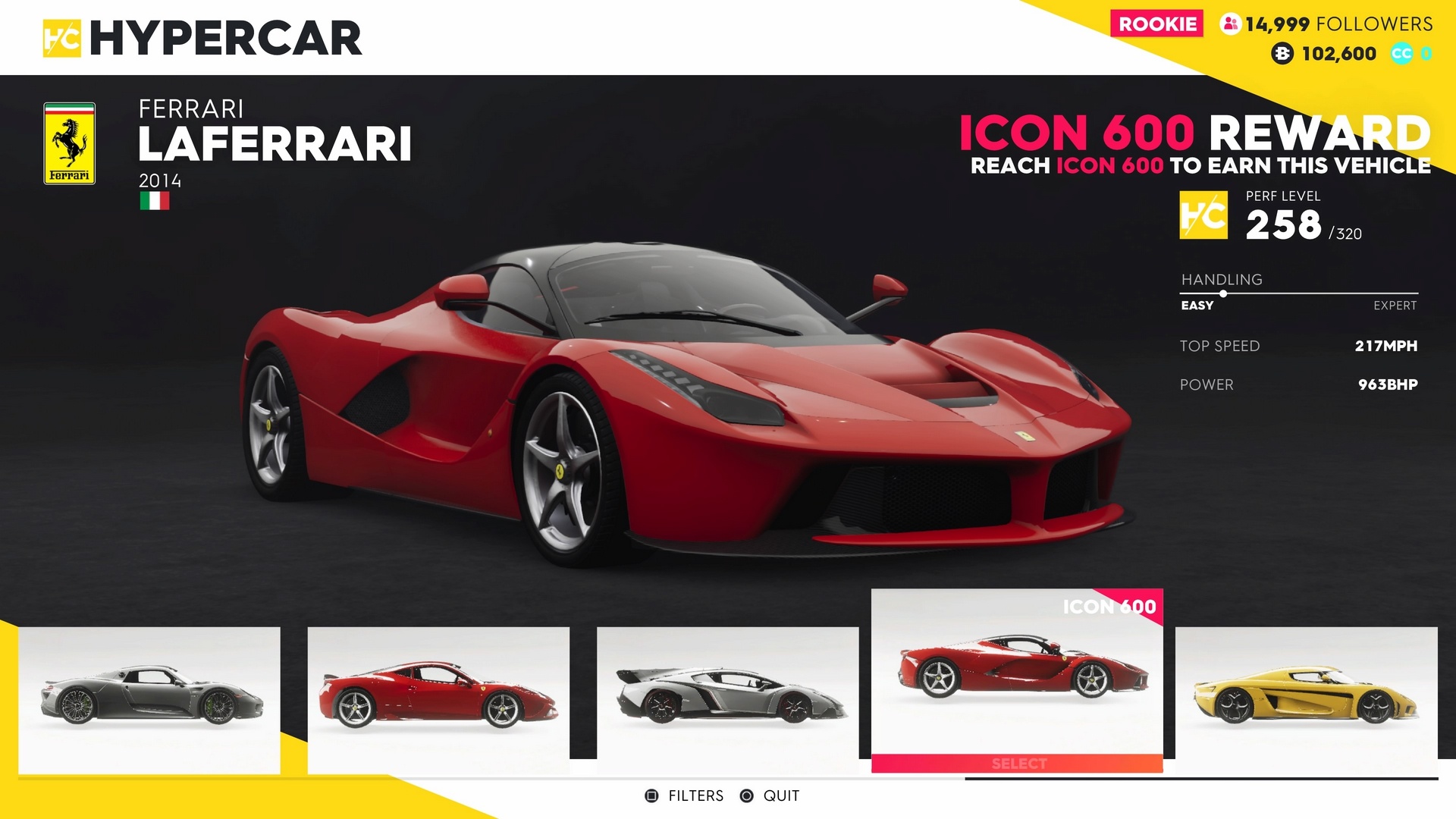 After the fantastic inception styled intro video finished playing it was straight into the action where you are introduced to Motornation, a home for motorsports and the beginning of your driving/piloting career.  The object of The Crew 2 is to establish yourself on the Motornation scene by taking part in tournaments and free roaming from coast to coast of America while building up your reputation within 4 disciplines namely; Street Racing; Powerboat; Rally Raid and Aerobatics. 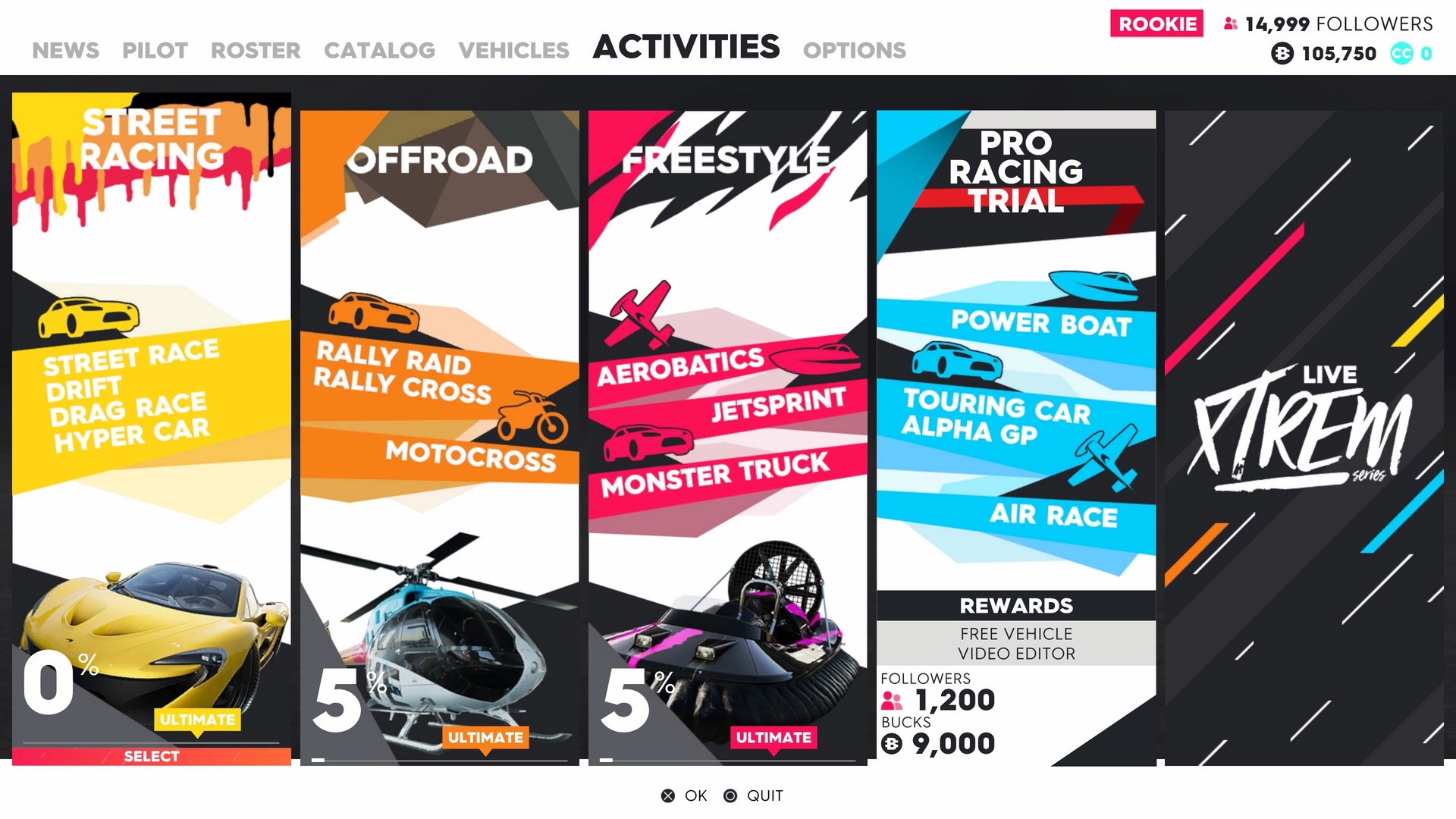 Street Racing: As it sounds, high performance pimped out cars take to the streets of some beautifully rendered real locations such as Las Vegas and New York in a number of races.  The handling of the vehicles was much better than I was expecting as I pulled off powerslides around corners and found some interesting short cuts that involved ramps and roof tops.  This discipline is where the nitro loving Need For Speed petrolheads get to tear up the cities of America.  Do not get too complacent in your driving as the AI, even on normal difficulty, can leave you for dust should you make a mistake.  As with the previous Crew game, direction indicators on the sides of the road are not cushions to allow you to slyly circumnavigate the outside of the track and overtake the other racers! Try this and you will simply fly through them Smokey and the Bandit style leaving you to hit the 2 shoulder buttons of your controller to force a track reset. 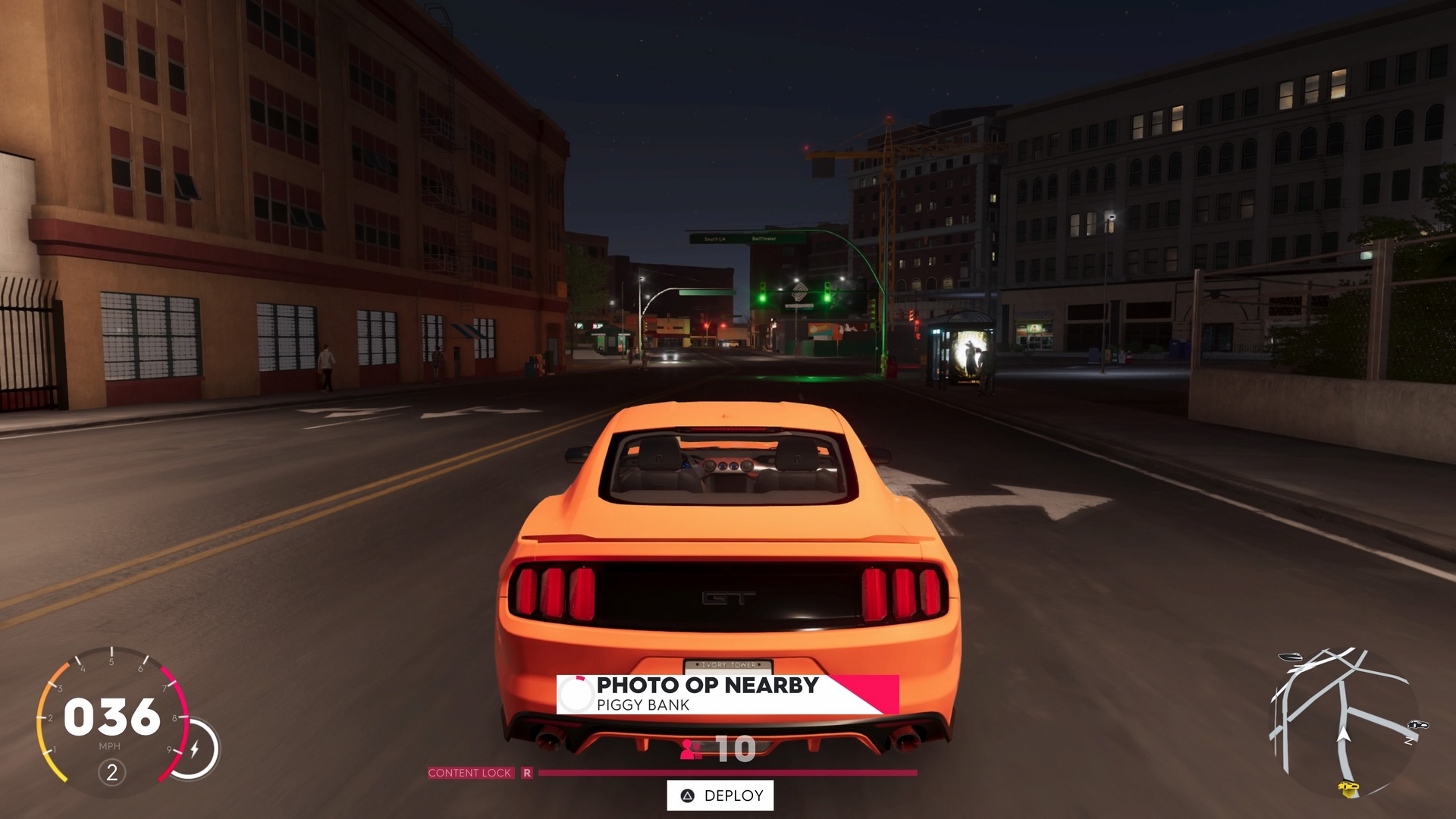 Powerboat: Taking to the coasts and lakes of America, powering through the waves in your shiny pocket rocket has never been so fun!  Race against others to be the first through that distant finishing line as you bounce across waves and shoot up ramps to grab the advantage over your opponents.  The powerboating is awesome and seems so realistic as you feel the power of your engine throbbing through the vibration of your controller.  Oh and the boats have nitro, of course, adding to the thrill of blitzing past second into first at the penultimate second.  There is a large range of boats to unlock, purchase and customise as well as bringing a refreshing set of challenges to the typical driving games that we are used to.  Don’t forget your waterproofs! 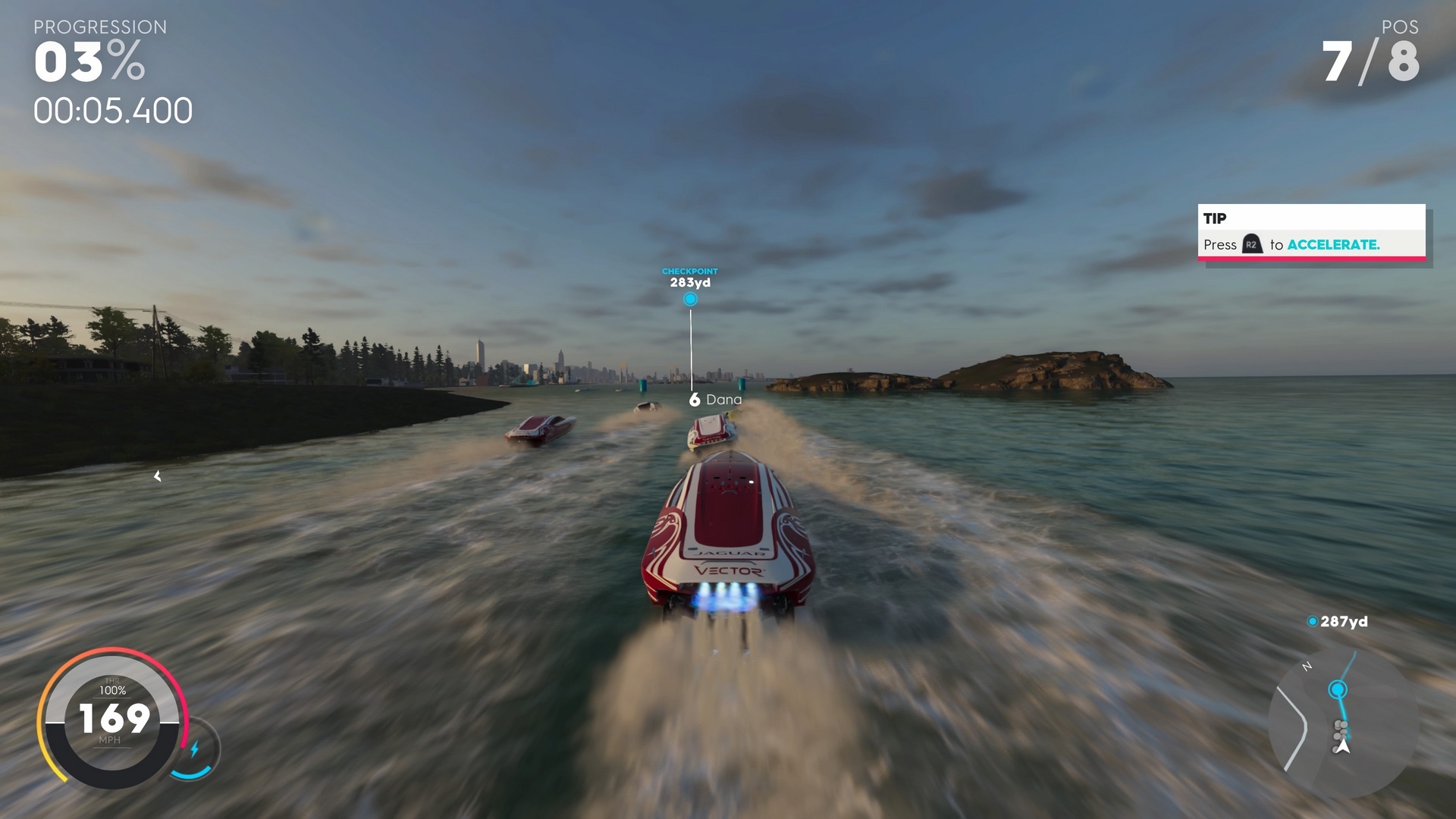 Rally Raid: Open world A to B madness.  This discipline is a time trial between 2 points on a map.  The vehicle and route you choose is totally up to you, drive 5 miles in the wrong direction if you want, The Crew 2 won’t stop you!  Leap off cliffs, scale steep hills and avoid the scenery as you hurtle through the landscape.  Here Ford raptors, Red Bull emblazoned dirt buggys, motorbikes even a monster truck can be your best friend or your worst nightmare.  Choose wisely and go have fun! 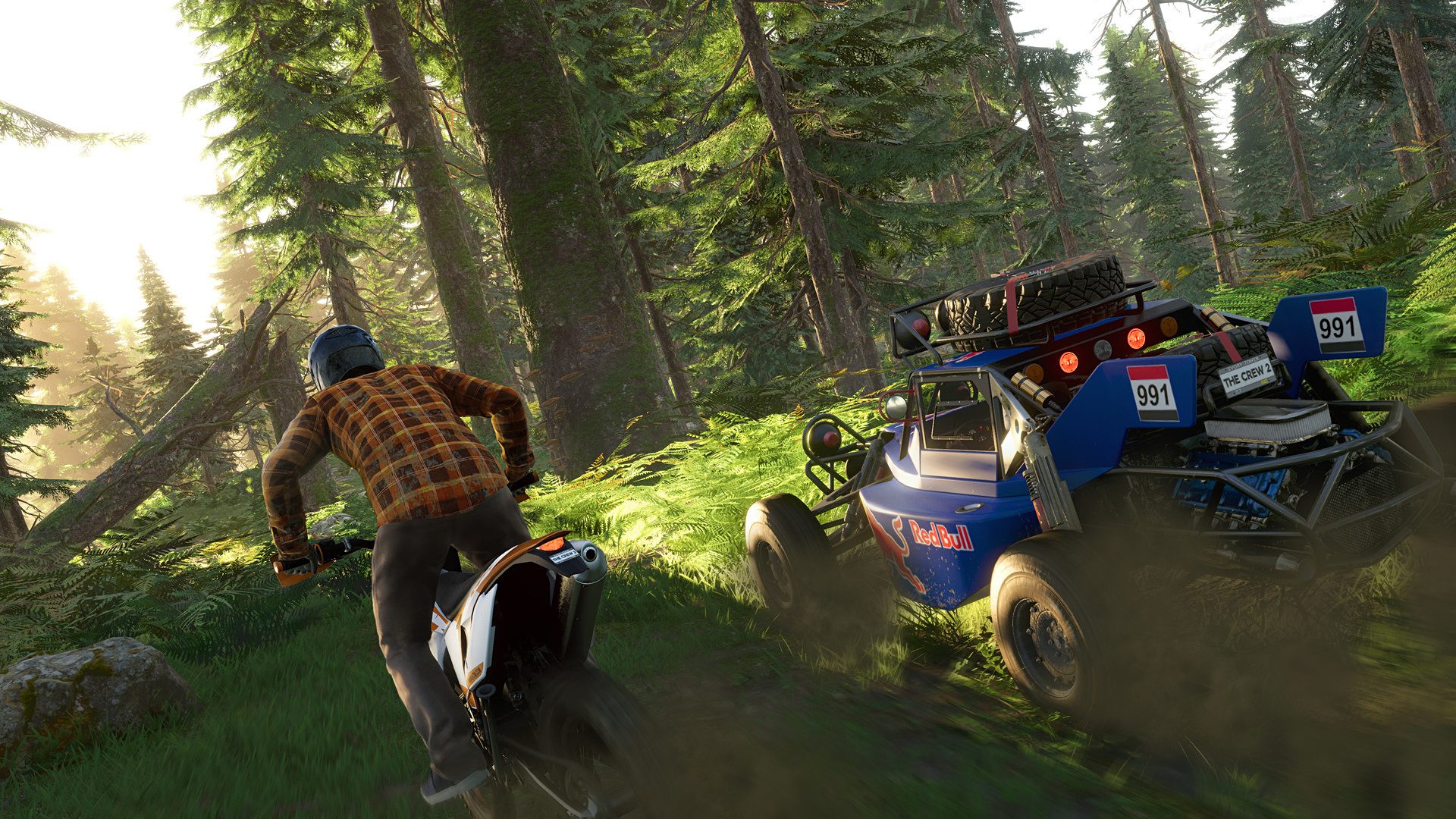 Aerobatics: Since I was a young lad I have watched in awe at the Red Bull plane shows where you see dare devil pilots taking on aerial tricks close to the ground, twisting and turning in an attempt to set that personal best and be crowned champion.  Well in The Crew 2 you too can have the same experience and fly a single engine plane as low or high as you wish while pulling off some crazy stunts.  The plane flew really well in the sky and the surrounding forests, rivers, roads and cities go on for miles into the distance giving a real sense of depth and achievement when having that “how on earth did I just pull that off!” moment.  My sons spent much of their time flying and loved speeding below bridges while upside down. 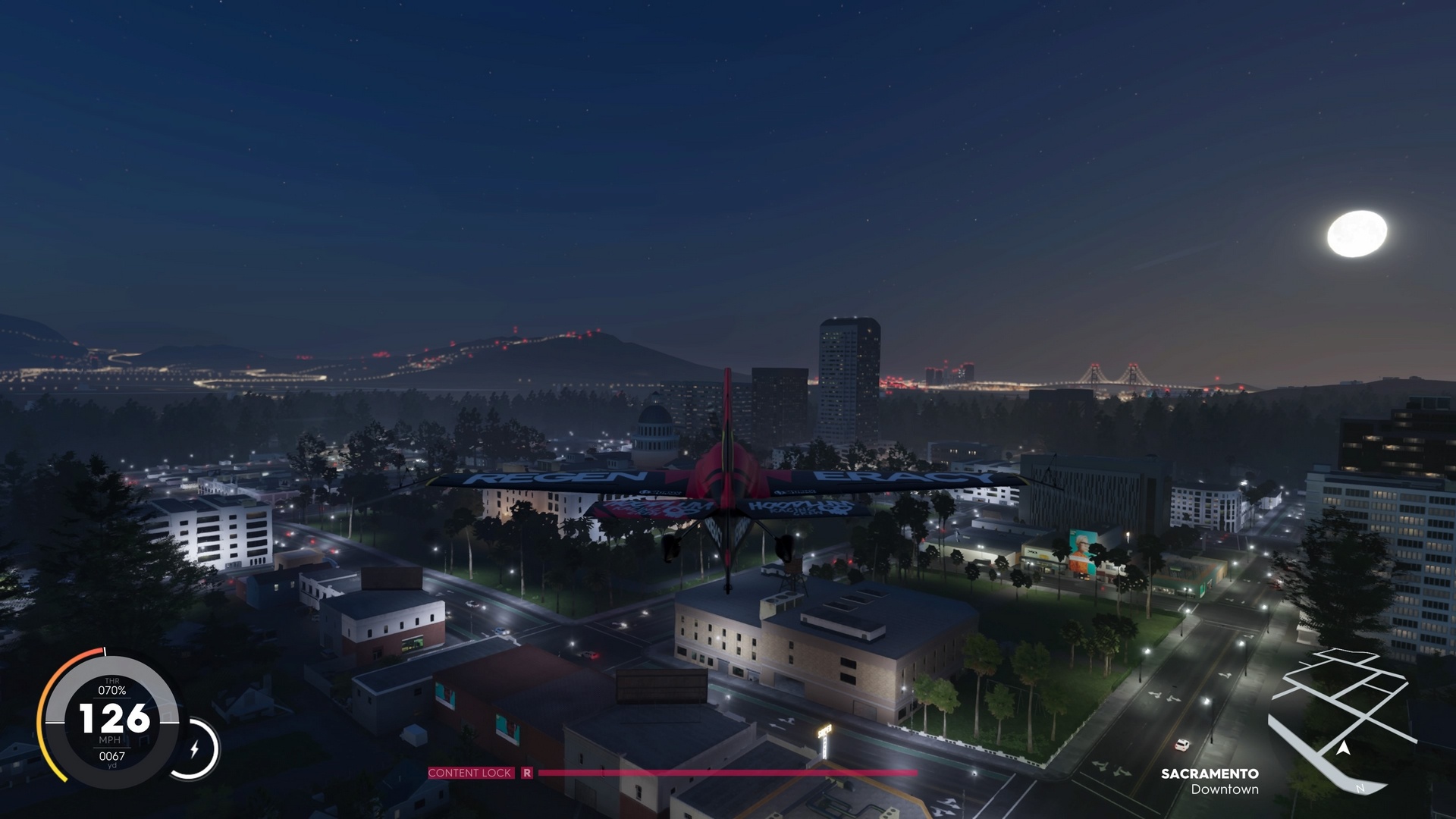 There are a family of tournaments to play through such as Freestyle, Street Racing, Off Road and Pro Racing which are each spread throughout the huge map of America.  The storyline of your rise to fame gathers pace as you play your way through The Crew 2.  Each win and stunt rewards you with in-game currency to spend on purchasing and upgrading fully licensed vehicles and facilities as well as boosting the number of social media followers that you have.  As your popularity rating begins to soar you unlock bigger and better vehicles to take out across the ever changing terrain. 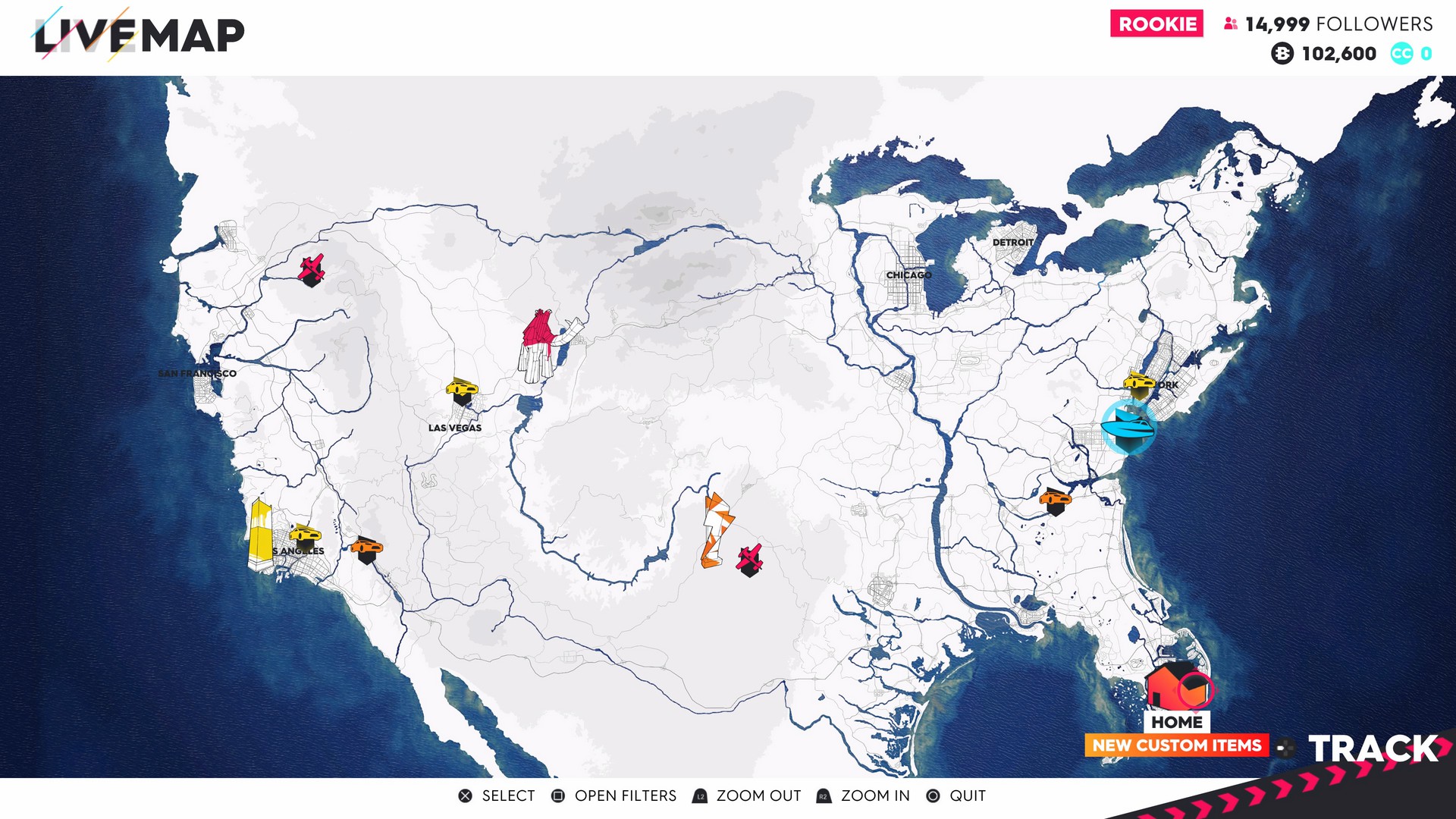 Free roam is a massive feature of The Crew 2, I did not experience any loading times or barriers, just drive, ride, fly and boat to your hearts content.  Day and night cycles nicely as well as the weather bringing a feeling of realism to the game.  Las Vegas looks awesome at night time!

There is a massive push in The Crew 2 to actually form a crew, something I got away without doing in the last game.  After having immense fun playing large free roaming games such as Ghost Recon: Wildlands with friends, and the amount of chaos we caused while driving, flying and riding about Bolivia, I can only imagine the shenanigans that can be had with your mates in The Crew 2.  Setup and take cool pictures to show off your latest ride, record movies of your amazing skills and take part in what can only be described as a festival of fun and speed! 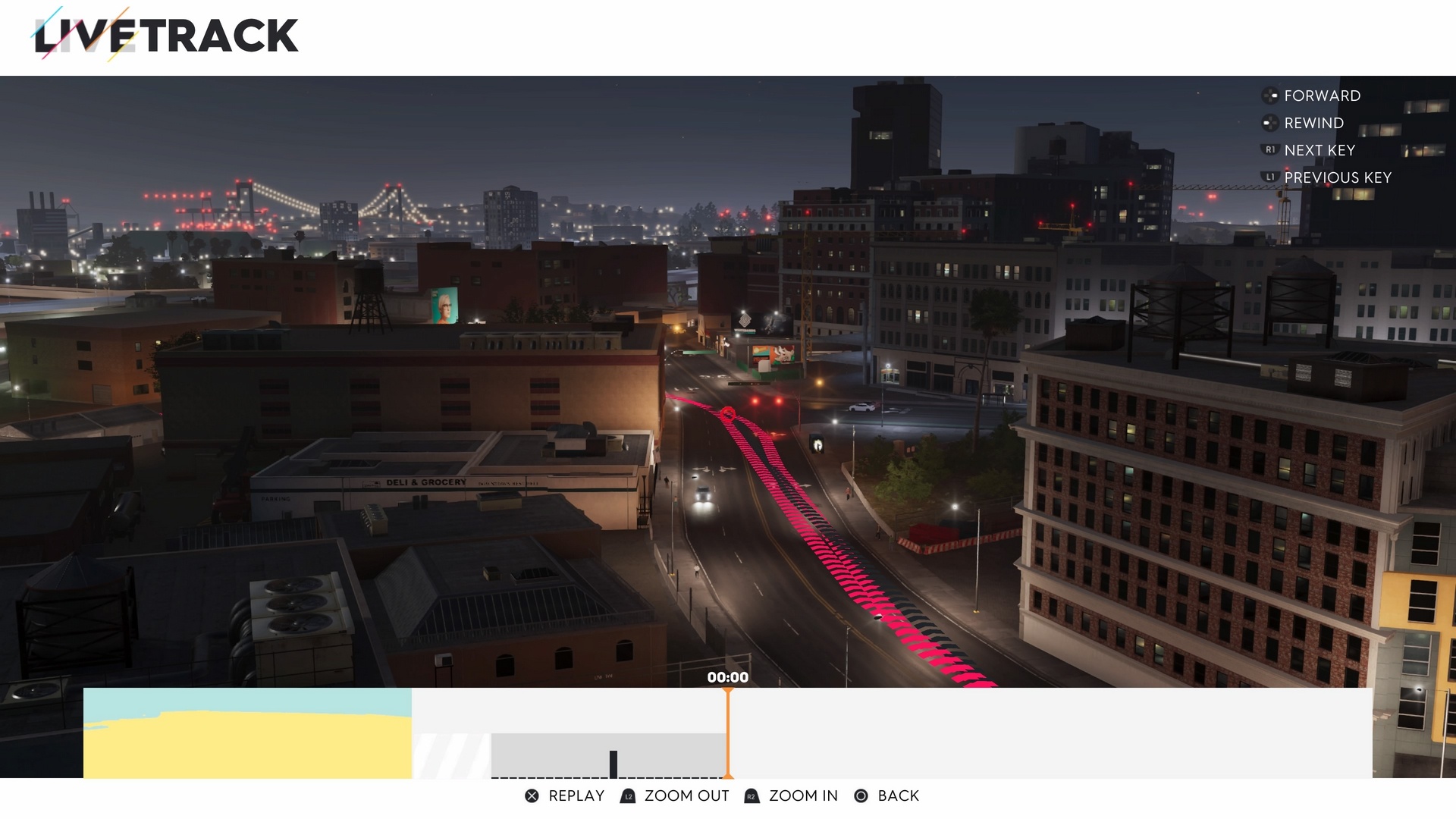 One more feature to whet the appetite of the hardcore racing driver out there.  I noticed this little menu of joy within the game options. 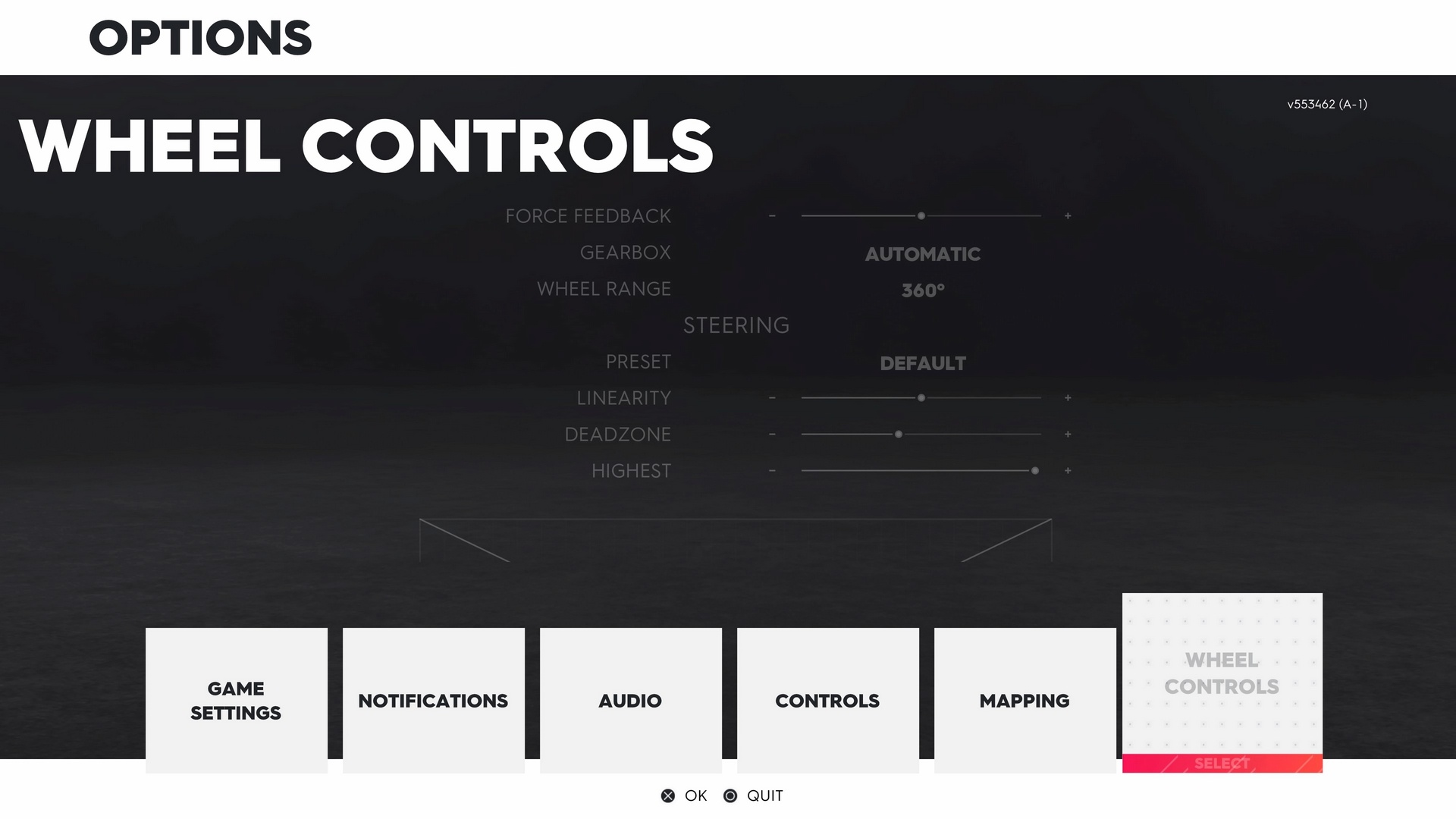 Wheel controls!!! Unfortunately I had lent my wheel out this weekend however this has really tempted me to purchase The Crew 2 when it comes out on June 29th.  So far I only have simulation racing games such as Dirt and GT Sport but crave an arcade, Burnout Paradise style game to throw the wheel around to!  This could be it, although I would be intrigued to see how the plane flies as like most wheels, it doesn’t move forwards and back and if it does it is because the bolts have come loose!

So my early days verdict.  The Crew 2 is 100 times better than The Crew, it looks and plays like a masterpiece, the vehicles are responsive and fun to drive, ride, pilot and there is enough diversity in ways to play to keep you wanting to come back for more.  The free roaming across America is simply amazing and is a lovely distraction from the main story allowing you to explore and discover new ramps, jumps and vistas in your own time.  There is something for everyone. If you are a petrolhead, put this in your pre-order basket right now!