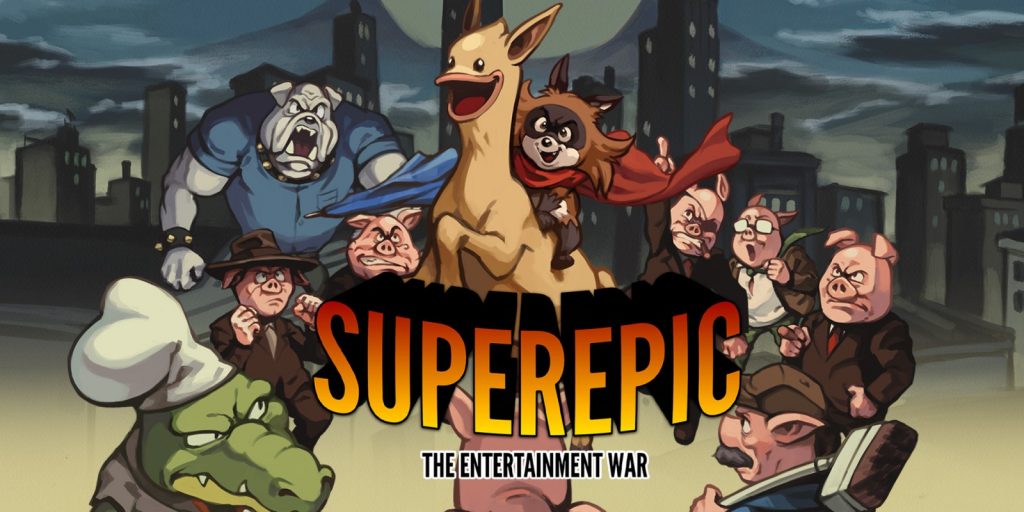 SuperEpic, developed by Undercoders and published by Numskull games, is an action platformer with strong Metroidvania elements… wait, come back! Yes, Metroidvania games are ten a penny at this point, but SuperEpic innovates with its intriguing “cross-media” features, taking the experience beyond the console.

SuperEpic is set in an alternate reality in which a greedy company called RegnantCorp, which is literally run by pigs, have brain-washed the world’s population into constantly playing terrible, loot-box and microtransaction-ridden games.  You play as TanTan, a household object-wielding raccoon who rides atop a llama called Ola.

I was initially put off by story of SuperEpic, which I found a bit too memey and ham-fisted (pardon the pun). These reservations melted away in seconds when the fluid gameplay and excellent art direction grabbed me by the plums.

Tantan has access to a number of attacks from the off; a fast but weak side-swipe, an uppercut with limited range which can juggle enemies, and a slow attack which can break through stronger enemies’ blocks and knock down weaker enemies altogether. Movement is initially limited to walking and jumping, but a dash and double jump are unlocked in the early sections of the game.

SuperEpic feels great to play, with a heavy focus on comboing enemies to increase monetary rewards. Hitting an enemy with an uppercut will typically send them flying into the air, and the more enemies you deal with simultaneously the more the gameplay starts to feel like an elaborate juggling routine, with the aim being not to let your combo end.

Enemy variety is excellent. SuperEpic features a veritable menagerie of antagonistic animals, each of which has its own distinct attacks. Much of the gameplay involves learning how to combat several of these different enemy types simultaneously. Thankfully TanTan can upgrade his weaponry and unlock additional “rage” attacks, which are metered, more powerful attacks which can be charged up by building large combos.

At the end of each stage there is a boss, and each is a bit player in the exploitation of Regnant Corp’s customers, be it the “Senior Monetisation Vampire” or “The Game Design Thief”. None of the bosses pose too much of a threat but they’re still enjoyable encounters which punish complacency.

SuperEpic plays really well. Controlling TanTan and Ola always feels precise, and juggling enemies while trying to keep your combo meter up is great fun once you get used to it, the only downside being that some enemies can be frustrating to deal with, particularly those with projectile attacks.

Where SuperEpic differs from the competition is via its “cross media” features. Not far into my playthrough I was surprised to spot a QR code next to a locked gate. I scanned the code on my phone and to my surprise I was linked to a RegnantCorp knock-off of Flappy Bird. Achieving a high score provided me with a code to unlock the gate. Later on another QR code took me to a mobile app which mined currency which could then be traded for cash cards, which can be used to buy items and special moves in game. I loved that Undercoders found a way to take the game beyond the confines of the Switch, and they have exhibited real skill in emulating the naffest mobile games out there so authentically.

These mobile games of course tie in SuperEpic‘s narrative. This is a game which was clearly put together by passionate developers who are dismayed at the cynicism found in games published by the likes of EA and Activisim. This means it feels like no accident that SuperEpic is such a complete package. Not only is there a sizeable map to explore along with several bosses to take down, but Undercoders have developed a completely separate rogue-lite mode which mixes up the gameplay with new weapons not found in game and a completely different system of progression. I dipped into this mode after finishing the campaign expecting a mild diversion, but I found myself being pulled in all over again.

My only major criticism is with the number of typos in the in-game text. SuperEpic was clearly translated from another language and could have done with an extra proof-read to ensure the dialogue stood up to scrutiny. It’s not too distracting as SuperEpic isn’t really driven by its story, but a bit of polish would make it feel less like a minor indie title and more on the level of games like Hollow Knight and Axiom Verge.

SuperEpic has brilliant retro-tinged visuals, calling to mind Earthworm Jim or Toejam and Earl with its wacky, skilfully animated sprite-work. Unusually for games of this genre very few enemies are simply harder versions of foes found earlier in the game, and it’s always fun to progress to a new area and see which bad lads inhabit it.

Backgrounds also look great, with the last area of the game being particularly detailed and varied.

SuperEpic looks great in both docked and handheld modes, though I recommend giving it a blast on the TV to see some of the animations close-up.

SuperEpic soundtrack isn’t limited to just one genre. Some tracks are the frenetic synthy jaunts laden with scratchy guitar, but music in later levels is more atmospheric, evoking the masterful David Wise’s work on Donkey Kong Country. Every level theme is memorable but never becomes annoying, which is great for a game which involves a fair bit of back-tracking.

SuperEpic offers a large map to explore and multiple endings depending upon whether you complete certain side objectives. The £20 price point might seem high, but with the rogue-lite mode meaning you kind of get two games in one so long as you want more of the campaign you’ll get your money’s worth. All that being said the platforming is not generally challenging (unless you’re shooting for all the secrets), so if you prefer your action platformers to be more platformer than action you might be done by the time the credits roll.

SuperEpic won’t be for everyone, but it’s perfect for gamers who enjoy action platformers with a Metroidvania structure. The gameplay can become repetitive but I never found that it stopped being fun. The challenge is pitched just about right to encourage you to save up for those upgrades which give you a couple more health points or a more powerful weapon. I give it the Thumb Culture gold award.