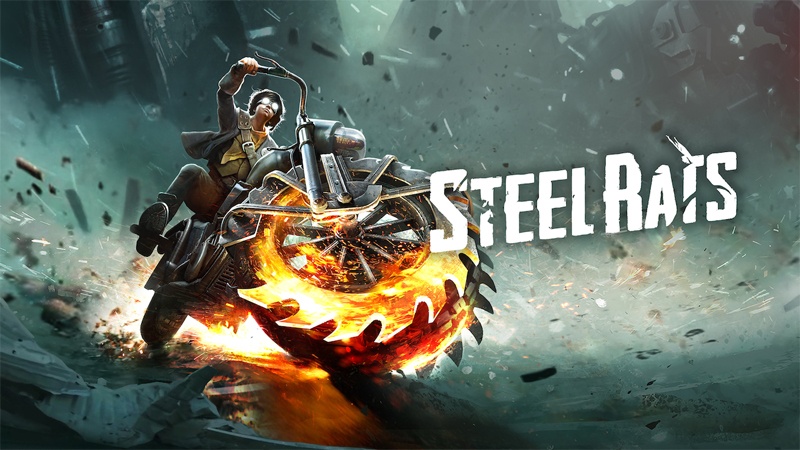 Steel Rats by Polish based Tate Multimedia (the devs behind the Urban Trial games) is out now on Playstation and PC and is a retro futuristic 2.5D motorbike combat game set in an explosive 1940’s diesel-soaked America whereby you ride through the districts of Coastal City destroying pretty much everything that gets in your path using your motorbike.  With the ability to turn your front wheel into a firey spinning disc, robots and even parked cars feel your wrath as you speed along the various platforms of the levels slicing through them like a hot knife through butter, all be it with a few explosions along the way.  When I played Steel Rats earlier in the year at EGX Rezzed in London I found myself getting a little frustrated with the controls.  Let’s see how the final release performs!

So who are the Steel Rats I hear you ask?  Well they happen to be a fearsome biker gang that have sworn to protect their retro futuristic city against an unrelenting invading army of alien robots.  There are 4 characters to choose from; James, Lisa, Randall and Toshi, each of which you are introduced to early on within the opening levels.  Each character comes with their own unique motorbike and special abilities that allow you to destroy the enemy in a number of ways, its not all bullets and rockets!

Steel Rats is ultimately a blend of Urban Trials meets weaponry whereby you carefully ride your motorbike through each level navigating platforms, jumps, lifts and verts while destroying lots of robotic enemy known as junkbots.  The physics from the Urban Trials games are very much present with the ability to control your bike balance in the air and perfect your landing, great when making long jumps across gaps.

The control of the bike is fairly smooth with a simple accelerate/brake function as well as a jump and dash feature for you to time well to avoid certain death.  While traversing the platforms you can swap lanes to avoid obstacles that you cannot slice through using your spinning blade enhanced front wheel, this mechanic is also used to good effect in order to climb up through the structures where you may pass a ramp and need to spin the bike around and change lanes in order to power up or down it.  There are a lot of occasions where it may not be obvious where you need to go in the level, yes there is a helpful arrow to guide you however one of the most awesome abilities that the motorbikes pack is the wall climb.  Spinning up your front wheel and running at certain vertical objects such as pipelines or walls allows you to latch the machine to them and drive straight up, or down, at high speed.  The sound you make is phenomenal as a futuristic screeching metal noise booms through your speakers.

Performing U turns or “the act of spinning your bike around” is the case of a simple button press however when combined with a lane change I did struggle at times when also dealing with other pressing issues such as being shot at resulting in me spinning around on the spot and getting peppered.  You are put to the test early on whereby you must hurtle down a long sequence of ramps to avoid being crushed by a falling object, the kind of moments I fall apart due to the pressure!

All in all there are 28 levels in Steel Rats that are spread across 5 cyber punk districts that takes you through mines across roofs down walls and through the guts of Coastal City.  It is down to you to select a character from the biker gang and take it on.  You will learn through your own playing style as to which one you are most suited to, there is no real right or wrong choice though, it’s purely personal preference.  Remember you can switch between the characters at any time however whoever you play as has both a health and life bar that you need to carefully watch over through each level.  Should you get battered then you will automatically start from the last checkpoint however if you die too many times then that character will be eliminated from the level and you will need to select one of your other characters to play as.  Once you have completed the level your deceased member returns to the gang once more.

If you think that this is just a simple get from A to B in the quickest time kind of game then you would be a little bit mistaken, although not totally wrong as some levels do have bonus objectives of that nature.  There are puzzles to solve along the way, usually using your bike to operate switches or power up machines.  The mobs of robots escalate rapidly as you enter the Halcyon Isle and the introduction of bosses to battle offers a much needed arcade style combat system into the mix.

Steel Rats features an upgrade system for the characters that allows you to spend the junk money you have collected through smashing robots and scenery on new perks, primary weapons, charges and ultimates, this helps you maintain your strength and destruction as the levels become tougher.  For lovers of all things customisable you can unlock and purchase new outfits for each of the characters as well as new paint jobs for the motorbikes.

Steel Rats features 2.5D style graphics that certainly give the cyber punk world a great deal of depth.  The art work has been meticulously thought through and I love how the dark Coastal City is brought to life in each of the districts using different colours and lighting effects.  The cutscenes and especially the early on introductions to the biker gang reminded me of something from the Quentin Tarantino films whereby a montage of images appeared along with their name and a short piece of music.  The explosions and effects look awesome as you cut both enemy and obstacles in half with your cutting disc front wheel showering the screen with sparks and flames galore.

Steel Rats features an amazing soundtrack that you really need to experience.  It’s opening track is like something straight from Blade Runner with a haunting electronic ambience that really sets the scene of a retro futuristic world.  Once the game has booted into the menu the ambience changes with a Massive Attack style song playing in the background accompanied with female vocals, not too distinct from the track Angel.  The deluxe version of Steel Rats comes with the soundtrack as a downloadable extra, its well worth a listen!

The sound effects within the game and voice acting is all great with a real thump coming from the motorbikes of a V twin engine.  If you sit around for too long I love the random cries from the character telling you to hurry up “C’mon guys my engine is cooling down!”

Steel Rats, as mentioned earlier has 28 levels for you to ride and fight your way through.  Each level has some bonus objectives that reward you with extra junk currency for completing as well as the odd bonus trophy to add to your gaming collection.  There are also secrets to find within each level that you may miss on the first time through as they tend to be strategically placed in areas that are not on the beaten path.

In conclusion, my experience of Steel Rats has certainly been a lot more positive compared to my earlier thoughts when I briefly had a play at EGX Rezzed.  I found the motorbike a lot easier to control and perhaps for me it was just the setting and the fact that I didn’t have a crowd of people watching around me while I rode into countless walls and fell down gaping chasms.

There is a lot to see and do in Steel Rats and it is all fun.  If you love Urban Trial style games and also enjoy destroying things while sitting on a motorbike then this is a game that will not disappoint you.

Disclaimer: A review code was received in order to complete this article.  Steel Rats is a brilliant game!!!