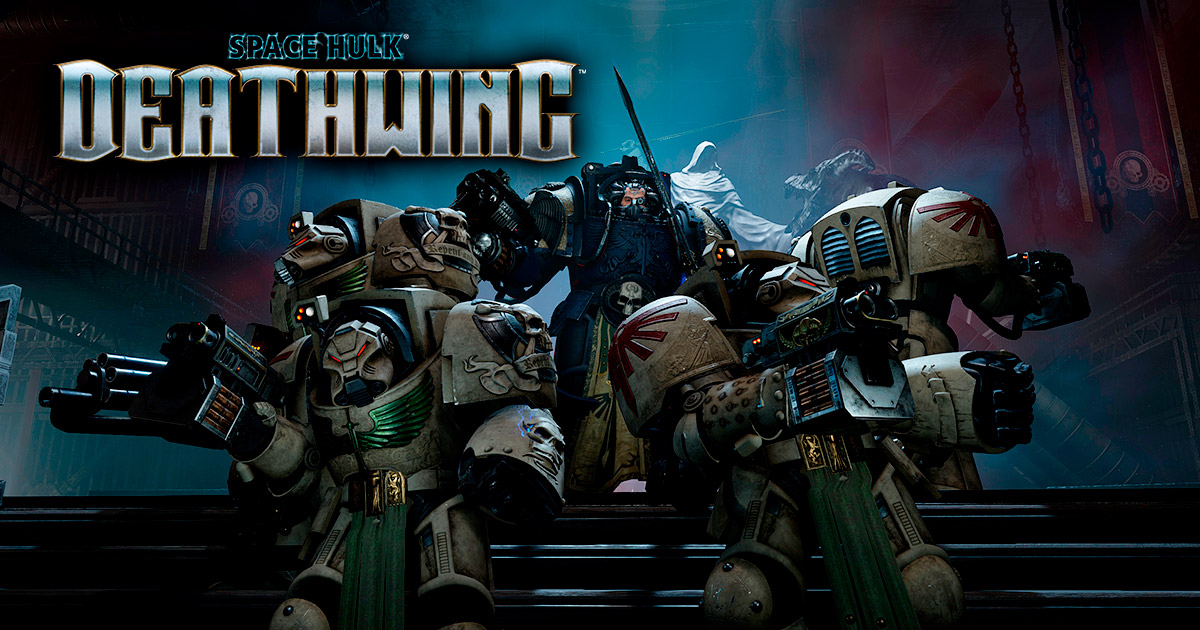 When I was a kid, I used to walk past the Games Workshop stores in my town and admire the posters and figures in the window. The design and detail in the Warhammer 40,000 universe was immense to a young me and I loved their take on Space Marines, aliens and intergalactic warfare.

There was so much story and background to them, it seemed like a secret universe that I felt like I would enjoy.

Problem was I preferred a joystick to a paint brush and video games to board games, so I just never took up on the hobby. If they had been larger action figures or in a video game I would have been a lot more invested. A young me would have dreamed of what it would be like to be a Space Marine, equipped with oversized weaponry and mech-suit armour; fast forward 30 years and by the power of PlayStation and Spacehulk Deathwing Enhanced Edition I finally can.

What does it feel like to be in tactical command of group of enhanced super soldiers with mech-rigs and arm cannons? Pretty damn good actually!

Spacehulk Deathwing Enhanced Edition is a first person tactical shooter which puts you in command of a team of The Deathwing, 1stcompany, Dark Angels Space Marines. It is a product of Streum On Studio and Focus Home Interactive, from the creators and designers at Games Workshop.

The game sees you sent to attack a Spacehulk, the name for a large collection of debris and spaceships, drifting through the cruel environment of space and filled with a variety of enemies including Genestealers (think cunning, fast toothy enemy akin to an Alien). Once there you set up a beachhead for more marines to arrive and secure the gigantic environment. As the leader of the team you not only choose the direction and targets for the game, you command others to heal, attack, defend, hold choke points or hack doors.

The Deathwing wear huge power-armour and the game moves quite slowly as a result, but not to its detriment. You get the protection and power of a massive mech-suit, so the dynamics feel appropriate.

Weapon selection and customization is a big thing the Warhammer universe and Spacehulk Deathwing Enhanced Edition uses that well in its gameplay. Melee and firearms are selectable and customizable as you progress through the game. Cosmetic and developmental mods are earned as you play more and the same is true for the armour. As well as traditional weapons you have “psych-powers” which equip you with lightning or force throws and the ability to teleport back to your base to re-arm and repair.

The Space hulk’s are huge, and your inbuilt GPS is essential, although even with it I got lost and ended up going along way down some dead-end corridors only to turn around and find wave after wave of Genestealers attacking us.

When we became swarmed by enemies, it was sometimes difficult to track your team, although their vitals are on your HUD, so you can tell if they need help. They also talk to you and narrate the objective or targets you have set.

I played this on a standard PS4 and the visuals were great and a couple of times the screen froze for brief moment, but I don’t think that was linked to the demanding graphics. The standard system handles it well. Spacehulk Deathwing Enhanced Edition runs on the Unreal4 engine which has been used to great effect on other titles, it is dark, atmospheric and looks brilliant.

Darkness in games hides a lot of mistakes or corners that have been cut, but here it is used for effect. Switch to heat sensitive scope and you can see enemies coming from a long distance, traversing huge areas to attack you.

Textures are well handled and consistent. Even on the standard PS4 , with a screen full of alien attackers, everything presents well and there is no pop in. The alien attackers are well animated and appear to move individually. There is no cloning or wave attack present. The different areas of the Spacehulk look and feel independent. You know if you’re in a hangar or an air duct. The maps must have taken an age to design.

The sound helps with the atmosphere, music and sound effects are used to good effect and the vocal feedback from your team helps with the tactical elements of the game. Again, time has been spent to make sure that the commands and replies are not too repetitive. With the sound cranked up or with headphones on, there are a lot of small details and atmospheric effects which help with the feeling. The suit and gun make satisfying noises as you use them.

The story mode, like the map, is huge and there is a lot of game time in Spacehulk Deathwing Enhanced Edition if it’s your thing. Although the objectives are pretty standard, go to point A, activate machine X, defend point B etc. the route you take can be varied and you can hack or destroy doors to make your way there. You can search for relics along the way which you collect and use to upgrade and modify your kit.

Each chapter is long and covers a number of different objectives. You can play with 2 AI’s as a 3-person team on LAN or online or play a co-op mode on variations of the main game.

It is a fairly traditional take on a tactical FPS, but if I was more invested in the lore then this would take a lot of my time up, as it is I’ll play it through but it doesn’t feel like a title I want to get too invested in.

The game is clearly for fans of the Warhammer characters and the attention to detail is huge. I don’t know the universe or lore behind this title so a lot of it went over my head, but it feels like a real passion project. Like genuine fans of the game have brought a solid FPS to life to play out their board game fantasies. As standalone game its really good. The movement is a bit pedestrian, the mech-suits don’t move fast, but the enemies are fast and varied and your loadout makes up for it. The feedback loop is big on this game. Modifying and improving your kit takes time so there is an element of grind involved. Again, this will appeal to fans of the franchise a LOT!

Spacehulk Deathwing Enhanced Edition deserves a solid Silver Thumb Culture award, but if you’re a fan of the franchise it’s a platinum.

Fun for gamers, essential for enthusiasts.