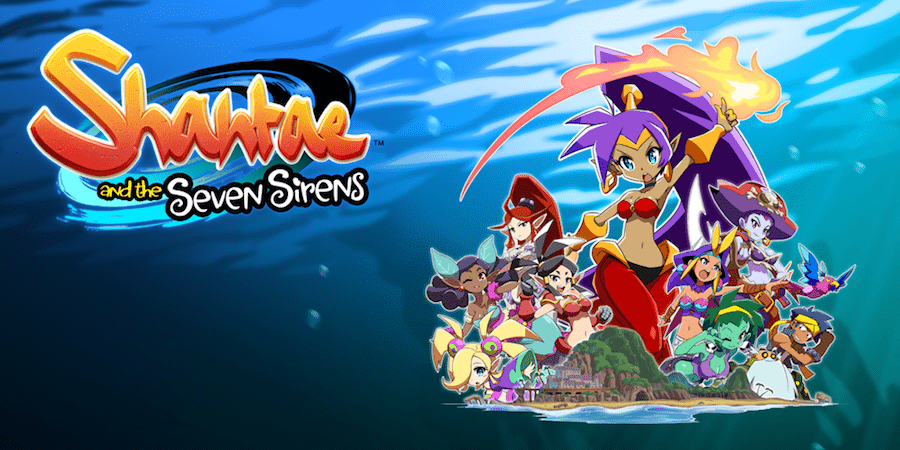 Don’t you just love it when a game packs a surprisingly fun punch? Personally, I’m always a big fan of getting my preconceived notions smashed to bits, and suffice it to say that WayForward’s Shantae And The Seven Sirens has done exactly that.

As a complete newcomer to the Shantae series, I had no idea what to expect. In fact, the opening titles of this instalment left me wondering if I’d accidentally stumbled into an actual anime cartoon at first. However, on jumping into my first playthrough, I found myself more than pleasantly surprised at this single-player platformer’s box of tricks (with a few caveats, but more on that later). Time to release this Half-Genie from the bottle and discover what makes Shantae And The Seven Sirens a refreshingly enjoyable game.

Shantae throws you into the action with a boldly colourful preamble in which you learn you’re the lucky winner of a tropical island holiday. As if that wasn’t exciting enough, you’ll also be taking part in the island’s Half-Genie Festival with a few of your fellow semi-magical peers. Unfortunately, all doesn’t quite go to plan and after a few premise-setting cutscenes, you quickly discover your main purpose; the search and rescue..

The island conceals a maze-like sunken city underneath its multiple towns. These subterranean depths provide you with a series of interconnected, labyrinth-like dungeon maps for Shantae to explore as she undertakes her mission to find and save the other half-genies.

The sunken city’s underground lairs provide an array of monsters and bosses for you to whip to smithereens with your ponytail; something I found incredibly satisfying and frankly, a welcome change from the beat-em-up style mechanics employed by similar platform games.

Survival mechanisms and collectables in-game are equally fun. As well as smashing vases and chests with your hair, you can collect items such as food, health and gems by magnetically drawing them towards you by belly-dancing, which genuinely made me laugh out loud at the ingenuity the first time I did it.

As the action progresses, Shantae also acquires Fusion Magic, enabling her to transform into various animal forms to make level navigation much easier as the zones and encounters become more challenging. This is something I really liked; who doesn’t want to turn themselves into a newt from time to time? Exploration is enjoyable throughout, and there’s a variety of quirkily-scripted NPCs to engage with around each of the island’s colourful towns up on the surface.

Something Shantae And The Seven Sirens does really well is its puzzle-solving; working out ways to traverse some of the sunken city levels was highly reminiscent of the frustratingly fun challenges of the epic Super Mario Bros. 3 back in the ’90s.

To me, it’s no mean feat for a modern-day game to invoke such a nostalgic feel-good factor in its gameplay, and for that, I think WayForward have achieved something truly notable. However, there are certain aspects of Shantae And The Seven Sirens that hark back to those retro-feels in ways that I found kind of problematic.

There’s absolutely no denying that this game looks fantastic. The use of colour is incredible and the level of detail in every bit of the animation is amazing. I played Shantae And The Seven Sirens on my Xbox One S and I had no issues with the resolution or quality of the graphics. If anything, at times I had to check I wasn’t actually playing some kind of live-action cartoon, the visuals were that good.

However, I’d be remiss if I didn’t mention the one thing that I did find difficult about Shantae and her adventures, and that was the distinct lack of clothing and the overtly-sexualised character designs. I know this may be a sticking point for me whereas for others, it’s just the game’s own style of artwork. Nonetheless, it left me feeling genuinely disappointed in a title that otherwise knocked me off my feet in terms of actual gameplay content.

As much as I loved playing Shantae And The Seven Sirens, I did find this whole aspect of the character design deeply problematic. As a parent, I’d have real concerns about letting my child play this game purely on the basis of this point. Which is a real shame, as it’s actually a cracking game, which I know my own almost seven-year-old would really enjoy if I allowed her to play it.

Ultimately though, if you’re releasing a game with a PEGI 7 rating (according to the Microsoft Store) on it, perhaps think twice about having your main character constantly (not to mention the rest of them) posing suggestively with her breasts spilling out of a tiny bikini top. Just a parental 2p.

On a lighter note, I especially enjoyed the soundtrack of Shantae And The Seven Sirens. Again, it evoked strong feelings of Sonic and Mario nostalgia for me, and enhanced the gameplay as a whole. Sound effects during combat and exploration work really well alongside the retro-pop background music, alongside the strong (if squeaky) voice acting done in cutscenes and NPC interactions.

If I’m honest, I could see myself playing this game for some time yet. Shantae’s adventures are a lot of fun, despite there only being the main base mode of the game to work through and no additional content that I could see as yet. It’s a ‘jump in and play’ sort of game, with minimal options for difficulty adjustment or controller customisation.

Personally, I liked that about it. Shantae And The Seven Sirens has introduced me to the franchise in a really positive way (aforementioned artistic issues aside) and I’ll almost certainly check out the other titles in the series after playing this one to its conclusion.

If you’re ready for a ridiculously entertaining bit of action, Shantae is your Half-Genie. All in all, it’s a fantastic game with lots of surprisingly enjoyable puzzles to solve and collectables to discover. I honestly didn’t expect to enjoy this game as much as I did, and if not for the questionable artistic direction, I’d have absolutely hailed this as a Platinum Award winner. However, the overly-sexualised styling of such young-looking characters is something I found difficult to ignore and something I can’t really turn a blind eye to as a woman in gaming. Other than this, the gameplay of Shantae And The Seven Sirens is fun, the level design is engaging and on the whole, it has a lot of positive things to whip your hair back and forth about.

All things considered, I’ll be awarding Shantae And The Seven Sirens with a Thumb Culture Gold Award.