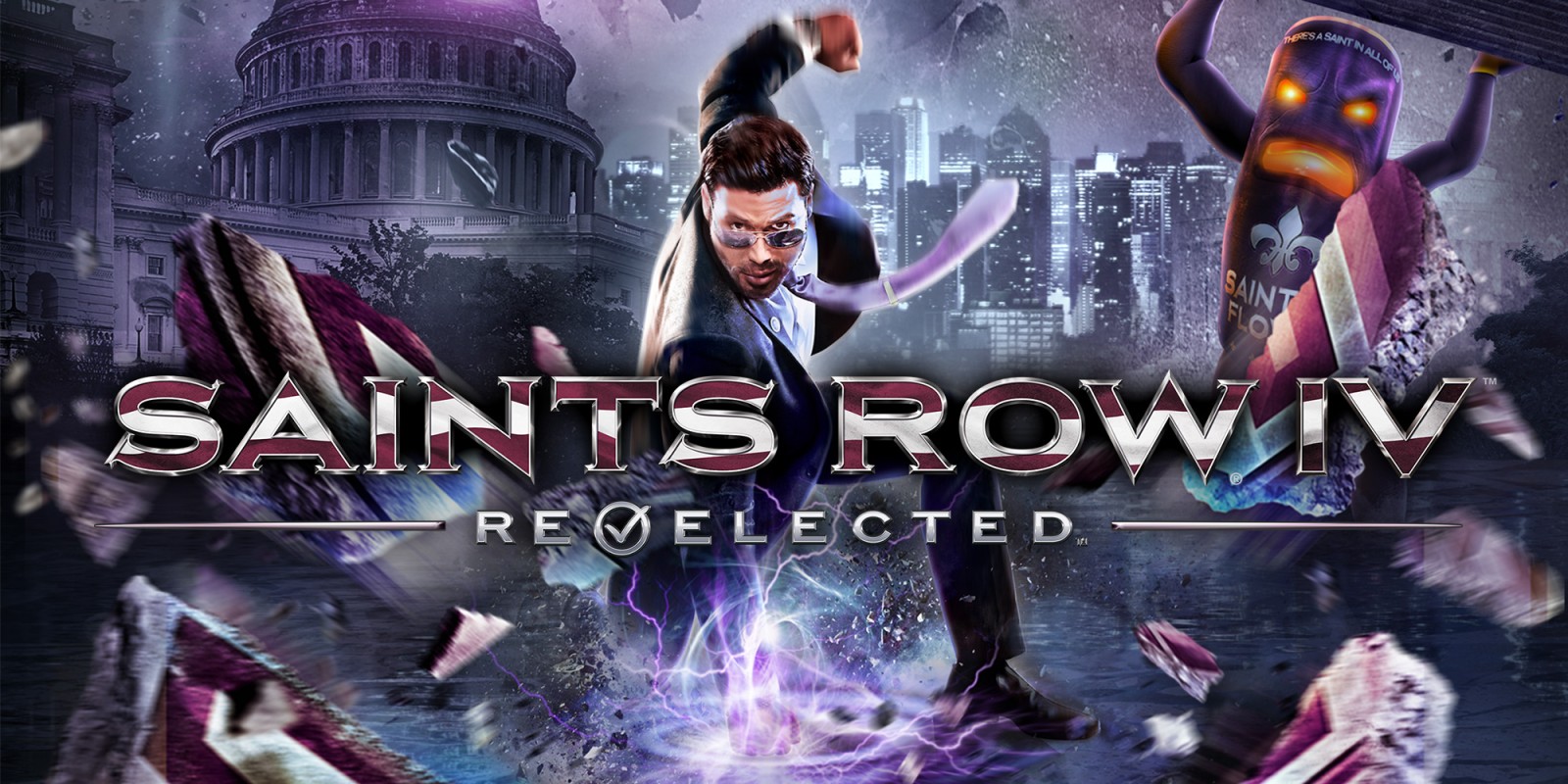 The Saints Row series of games have a relatively illustrious history, first launching in 2008 as a respectable take on Grand Theft Auto, before spawning a number of sequels which got progressively more wacky. Unfortunately, my mum wouldn’t let me play violent games back in those days (I only got to play Bomberman when I moved out of the family home at 25), so I never got to experience the franchise on release. As such, when the chance came up to review Saints Row IV Re-Elected on the Switch, I jumped at it.

I’m actually the perfect person to review this game, I reckon, as I’ve no previous experience of Saints Row games, and suspect this may be the same position that a lot of gamers who are considering Saints Row IV Re-Elected‘s purchase on the Switch may hold as well. You can, therefore, be reassured that my review will be devoid of prior knowledge, bias, or humour. Let’s get started!

The first question someone like me might ask about Saints Row IV Re-elected is ‘do I need to have played the previous Saints Row games to understand it?’. The answer to this is a resounding ‘No!’. Saints Row IV Re-Elected is utterly bonkers and, as far as I can tell, the series is now completely devolved from the fairly serious gang-warfare plot of the early games. This is now a GTA-styled sandbox game on superhero steroids.

The game starts with a short intro mission that involves you having to defuse a nuclear missile. This is not totally unusual for a 3rd person shooter, I suppose. The mission ends, however, with you jumping on to the launched missile, and flying through the sky to Aerosmith’s ‘I Don’t Wanna Miss A Thing’ whilst pulling out its components. 5 minutes later, you’re in the Oval Office (having apparently been made president, natch), and are heading for a press conference when an alien invading force crashes through the roof of the White House. If you were looking for a plot equivalent to the works of Tolstoy, this game is not it!

After this point, the remainder of play takes place in an AI simulation of your character’s home town, Steelport. As well as being able to go around the city stealing cars and running over innocent pedestrians (you can’t stop me now, mum!), you now also have access to super powers…because why not! The main story (which is handled mission by mission a la GTA) isn’t really challenging,  but it certainly is enjoyable. It’s also available to play as co-op, which is an added bonus.

I wasn’t expecting anything like this going into the game, but the ability to run around a city using super speed whilst freezing aliens within blocks of ice is pretty hilarious. There are also some really funny minigames to locate across the town. There’s a rag doll physics one where your aim is to get hit by as many cars as possible and send yourself flying for points. This is thoroughly enjoyable, although I wouldn’t necessarily recommend Saints Row IV Re-Elected if teaching children about road safety.

Hopefully, I’ve got across that this is a game which doesn’t take itself too seriously. With the state of the world as it is right now (I write this review in Coronavirus enforced self-isolation), we probably need a bit of silliness in our lives.

I do have some criticisms though. Firstly, the game is a tad buggy. I had to restart the intro mission because the player character got stuck in a wall somehow.  There are a number of times I’ve been driving in cars and found myself getting stuck against objects. I don’t think this is unique to the Switch port, but the developers clearly haven’t attempted to fix these issues.

Secondly, this game is now seven years old and, to be honest, it does feel it. I’ve no doubt that, had I played Saints Row IV Re-Elected on its original release, I would have fallen for it a lot more. The world has moved on a lot in 7 years though. The physics engine, camera control, and shooting controls do feel quite dated now. The camera and aiming system also isn’t particularly helped by the Switch’s control layout when used in portable mode. It’s a little awkward trying to precisely aim the analogue sticks. This is particularly bad when undertaking fast-paced action scenes, such as some of the timed races. It plays a lot easier on the TV for these bits.

Much as with my criticisms with Saints Row IV Re-Elected‘s gameplay, I’m afraid that the game’s graphics do look a bit dated nowadays. Remember, Deep Silver put this game out in 2013 for the PlayStation 3, and it has the appearance to match. There is, at times, some quite noticeable aliasing. Whilst I’m a fan of retro gaming, there was a missed opportunity here to add polish for a next gen release. Particularly in light of the fact that the RRP for this game is £35, which is almost as much as some brand new Switch titles.

I also find the sandbox nature of the game to be a bit more obvious than with competitor titles. This may be down to the texture and the lighting of Steelport being a touch ‘one note’ upon arrival. The city is stuck in a permanent noir-esque nighttime due to the alien presence.. More positively though, there’s some excellent clothing/hair customisation options for your main character. This allows you to get creative in the most gaudy of ways. Whilst the graphics are definitely a generation or two old, they’re honestly still perfectly acceptable. It’s not like trying to play Goldeneye nowadays where you end up with permanent eye strain after 30 seconds.  I also didn’t detect any slowdown or frame rate issues in my play through. This is often an issue with badly ported titles.

Audio in Saints Row IV Re-Elected is another matter entirely – it’s pretty top notch! The game has full voice acting. The voice acting is really well done capturing the personality and humour of the characters excellently. You can even customise your own character voice, which was a really nice touch (including lowering or raising the pitch!). Developer Volition really did pull out the stops here, including licencing some classic tracks for the radio stations. Baby; good audio lasts forever!

Saints Row IV Re-Elected includes a fair amount of content, so you’ll be playing Superman for a good while. The main story clocks in at about 15 hours, but that doesn’t include all the additional side material. Depending on how much of a completionist you are, you could quite happily be running around Steelport for 30 to 40 hours before exhausting its features. This is where the game, to me, really shines on the Switch. If you just want to quickly dip in and out and play a few missions, or beat your personal best mini-game scores, it’s a fantastic game to have in your back pocket.

Ah, the final score. This is where things get tricky. Saints Row IV Re-Elected is a fully-featured romp, but it’s also a slightly aged one and, whilst it might be a portable bundle of fun, controlling it on the Switch is not always the easiest of tasks. Then there’s the price at £35, which I personally think is steep for a port of a game that’s available on the PC, at time of writing, for £3.79 (yes, you read that right!). Ultimately, whether or not Saints Row IV is worth the price it’s going for on the Switch depends on how much you love sandbox games, and how much you want to play them away from your TV. I can’t answer that question for you, but I can say that Saints Row IV Re-Elected is a very good and often hilarious game. I’m giving it a silver (Volition – make a damn sequel!).