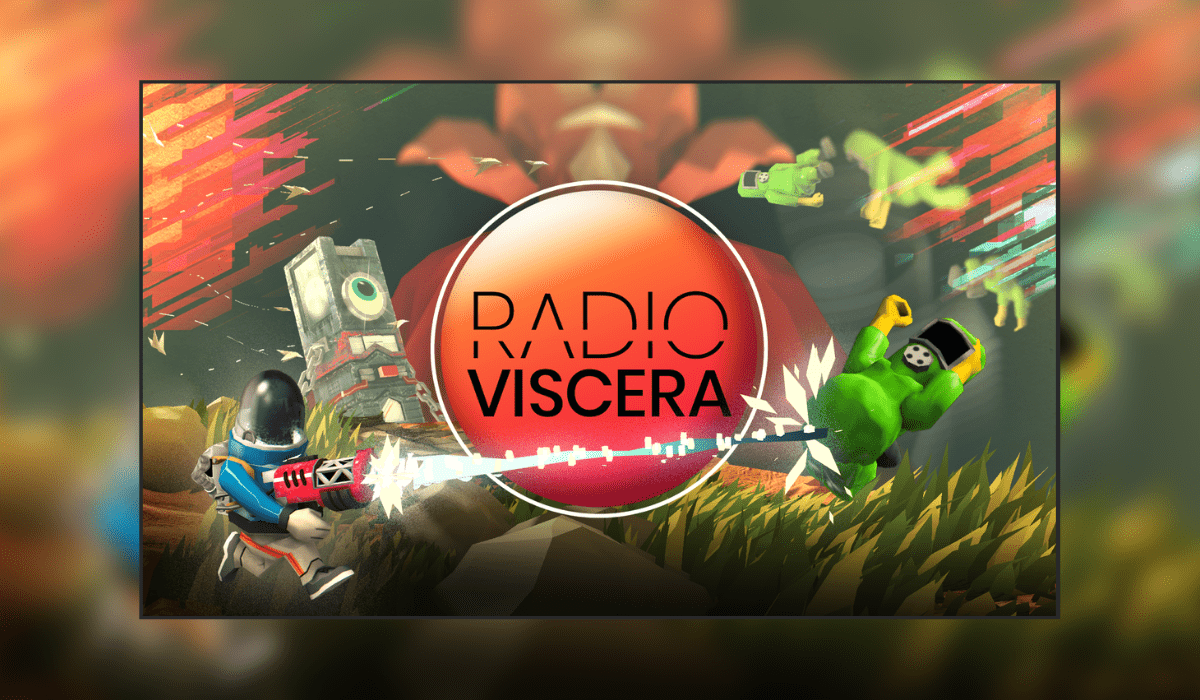 From the development studio Fireface, under the publication of Alliance comes Radio Viscera. What we have here is a top-down shooter that’s a bit different in Radio Viscera you don’t have a gun as such, it’s more a tool that knocks enemies back into perilous traps. Fireface is made up of just one man, that man being Owen Deery. I was quite surprised to learn that one man was behind this, as it’s quite polished and really does run well, but we’ll get to all that later.

The walls are weak… Destroy them

Being a fan of indie games with an arcade-like feel, I was excited to give this one a go. How did I get on? You’ll have to carry on reading to find that one out. If you enjoy this review, you can check out my previous article, where I gave a preview of Terra Nil here. As always you can catch up with me and the rest of the Thumb Culture team over on Twitter.

Radio Viscera is a top-down action game set in a dystopian, urban environment. The player starts outside in what is described as a “workplace accident” at a Y2k facility. Walking through the rubble left by what caused this mess you find a radar that unlocks your objectives. Moving on further you will come across some screens giving you a brief outline of what happened, before being asked to toss your suit into the acid to destroy. Instead of doing what is asked, you can pick up your weapon, the “Whumper” Which is described as an “Air-powered evacuation device”. This is your bread and butter for the rest of the game.

Ignoring the orders given to you by the voice on the screens, you can punch your way through the wall to the right with your newfound weapon. Radio Viscera is all about punching holes in walls to get places, you’ll get used to making your own path the more you play. Before long you will come across the first group of enemies. These are what appear to be men in green hazmat suits, these are the loyal workers that were affected by the “workplace accident” and have gone rogue. These men will try to shoot you while you’re running about the place. You will encounter other enemies later on that require some thinking to kill, but we will let you discover those on your own.

Now your goal here is to blast them into various traps along the walls and floors. These consist of grinders, crushers, acid pits, and holes in the floor. Knocking an enemy into any one of these will instantly kill them, which is nice considering you will get a lot of enemies at a time swarm the player. The action in Radio Viscera gets fast and furious quickly, so you better hope you’re a good shot with the air-powered “whumper” at your disposal.

You will also come across observation stations, which if you find 3 of these you will be granted one of the many mutators that keep the game interesting, the couple I unlocked during my time playing were: Enemies explode on death and Big head mode, but I am sure there are many more for the player to discover.

I really like that at the end of a level you are given 3 gif highlights of your time in that level, which you can save to your hard drive and distribute as you see fit. It’s a nice touch and not something I have seen in a lot of games.

Radio Viscera is a charming-looking game. Quite simplified graphics but they work very well for the style of gameplay. I encountered zero graphical glitches during my time playing. The only thing that was a bit strange was the camera. I felt sometimes it would benefit from a greater field of view. A lot of the time the enemies would be off the screen. This makes it quite hard to gauge where they’re going to come from. There’s only a small indicator around the player to show the enemy position.

The screen shake was quite nauseating, you can turn this off in the settings, but I don’t feel like it 100% eliminates the issue.

Being a level-based game, there’s enough here to keep you going for a while. Just keep making your way through and doing the objectives at each level. For the completionist, there are also posters to collect. There’s also “mutator orbs” which unlock more mutator options to change the game up even more. This results in the game being even more fun than before.

I enjoyed my time with Radio Viscera. It’s a fun little game that’s quite reminiscent of a twin-stick shooter. Considering it was created by one man over the course of 3 years it’s quite impressive. I reached out to the developer (Owen Deery) who sent me a timelapse of the development of the game. If that’s something you would like to see I will leave the link for you below.

Overall this was a fun experience, and with no glitches or game-breaking bugs, it was a joy to play. I give Radio Viscera the Thumb Culture Gold Award and look forward to what the developer has in store for us next. I will leave the trailer down below for you all to see.