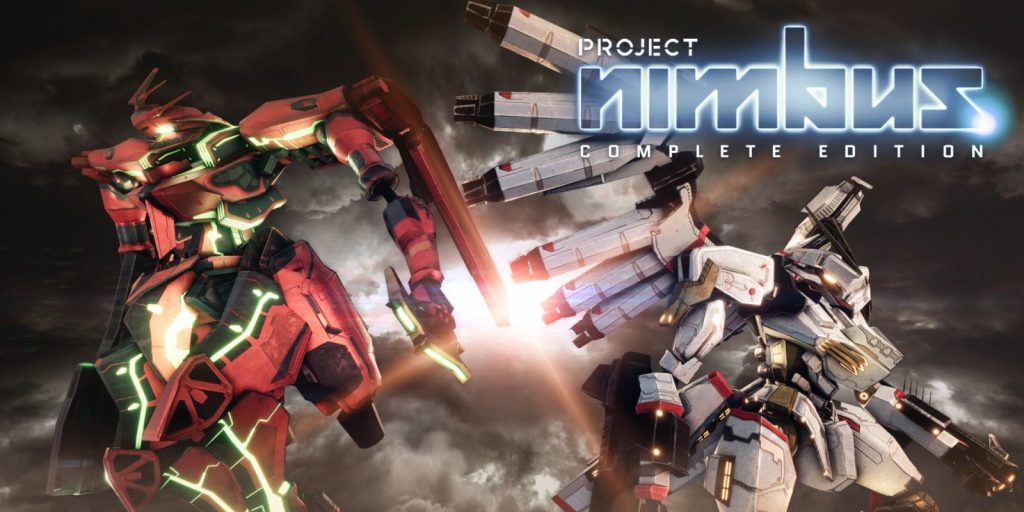 Okay, no, let’s get this ironed out right away, Project Nimbus isn’t a game based on the Nimbus 2000 from Harry Potter. What it is however, is an intense, action packed, airborne mech shooter that’s bound to get you nose-to-screen, and teeth grinding.

Project Nimbus has recently just flown its way out of Early Access on the 26th of September 2017, and is being developed by GameCrafterTeam, a development team of four, and an additional two composers. It’s set in a post-apocalyptic Earth in which the player controls mechs, otherwise known in-game as, “BattleFrames”. These giant suits are equipped with missiles and automatic weapons, powerful jets to enable them to fly, and heavily armoured for intense sky battles. Each BattleFrame pilot have their own styles of fighting, and while the games main storyline has been completed since coming out of Early Access, there are still going to be more characters added. The project raised £17,689 over on Kickstarter with over 1,100 backers supporting the title. Originally the game was only looking for £6,000.

The world fell victim to a devastating great war that destroyed the surface of the Earth, forcing mankind to move to the sky, but there’s a division between the survivors of the war, and those three divisions have their own “Orbital Elevators” that keeps their sky based cities afloat, and each division have their own army of mechs. The battlegrounds are set amongst the skies of the lifeless Earth below, and you are one of these pilots that find themselves strapping themselves into the bulky BattleFrame, how exactly does the gameplay play out? 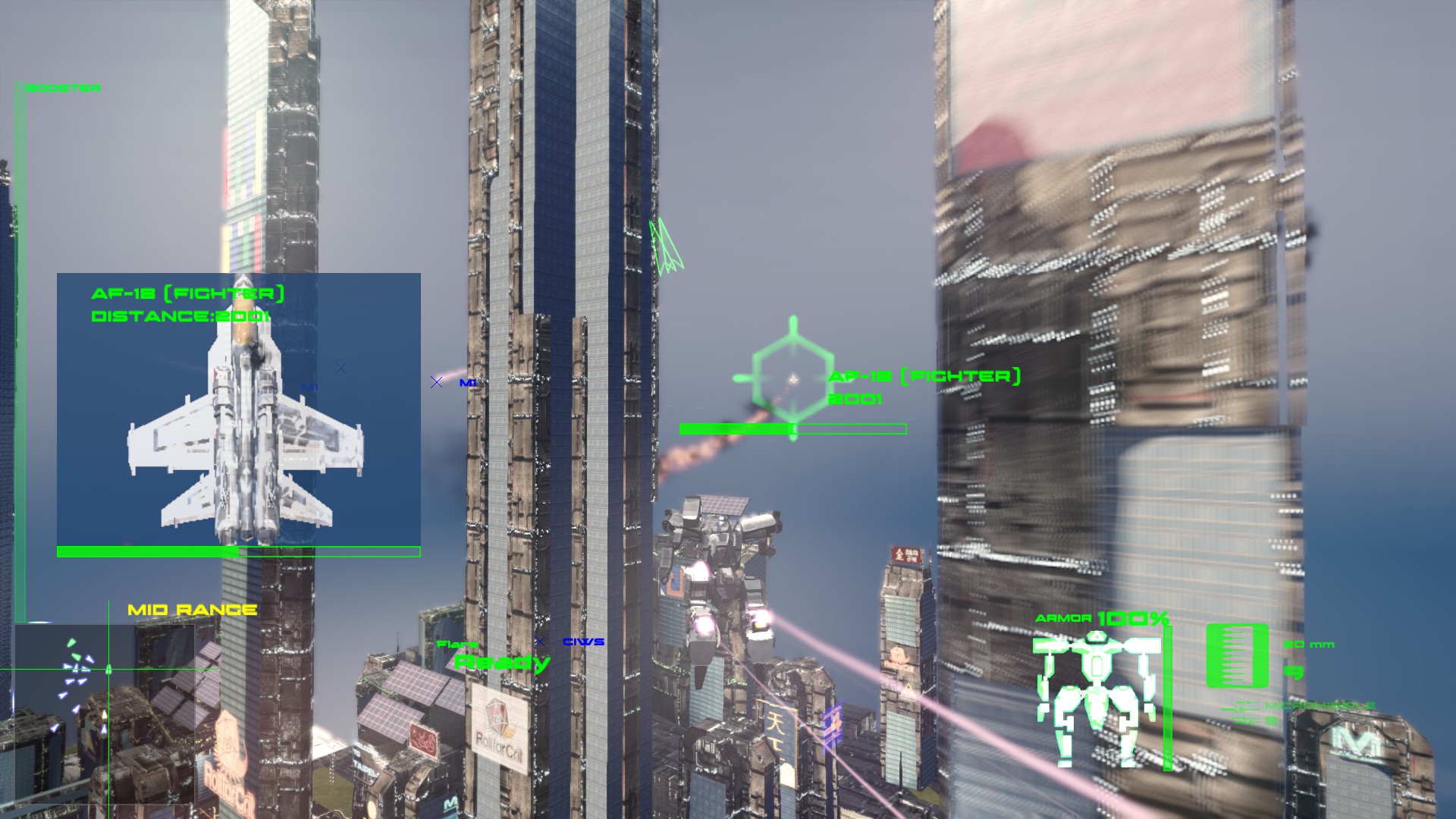 Well firstly, the game isn’t like your average air combat games, these aren’t planes that have 50,000 buttons to press to perform certain instructions so it isn’t a simulator, and the BattleFrame’s are shaped like a humanoid which allows ground control as well as being quick and nimble in the sky, however there’s no ground control in the game.

Right, let’s get talking about the actual game. It’s a single player title, and it has a campaign mode, and a survival mode. The campaign comes in four acts, with each having a few missions within them. There are cut scenes that illustrate the voice overs, then you get sent to the room where you get to choose between any available pilots for that mission, there are also audio logs that you can play and listen to as you move the camera around the selected BattleFrame. Once ready, you can start the mission, and it’s pretty much straight into it with voice acting throughout at key moments. The survival is as you’d expect…survive.

To start with, the game does feel rather daunting knowing that you’ve got fast paced combat ahead of you, and knowing that you’ve got complete directional control with you being allowed to suddenly change direction at any moment whenever you like. Thankfully, the interactive tutorial before you begin the campaign is explained so well that it’s almost as if you’re being carried in the safe, loving arms of the developers while being able to fully understand everything being fed to you. The tutorial gets you through the movements, introducing you to parrying left and right, forward, backwards, and even vertically up and down. You get to use the boost system, and then it’s right into combat training. This was surprisingly so simple that I was able to just focus on moving around while my hands automatically started locking onto enemies and shooting. 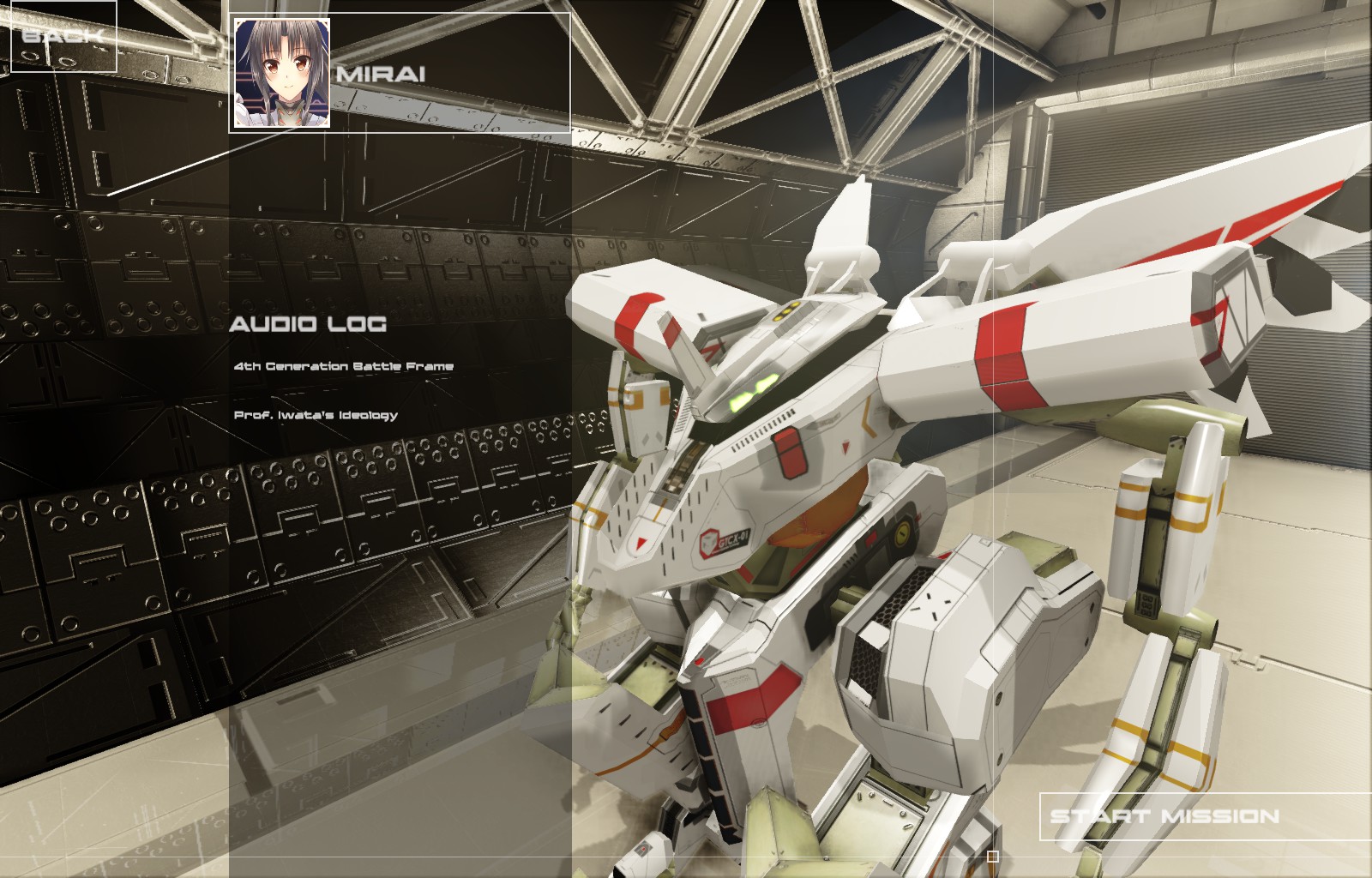 Let me get into the controls more. I’m fairly sure that the game was heavily inspired by Zone of the Enders, or at least, the Armoured Core titles. Both of those games feature a mech that flies at insane speeds in the sky. In Project Nimbus, you can move around freely, and very rapidly in any direction, and you can fly upwards to the top of the world map, or downwards to the sea/ground. Annoyingly, the keyboard layout for some of these actions are in awkward placements as standard. WASD is the usual, forward, backwards, left, and right, but up and down are E and C, with R being reload, and F being flare, and 1, 2, 3, 4, 5, and 6, being weapon change keys, and ARGH, there’s so much. Although the funny thing is, it’s actually a standard layout for most games, but I feel like the fact there’s a lot of finger stretching in Project Nimbus that just eventually wears down your finger fatigue because the game requires fast tapping. There is a joystick option for Xbox Controllers, so really, I highly recommend that as it’s far more comfortable due to the speed of the gameplay. I also want to pull attention to the X key that dumps you into cockpit view. The Kickstarter mentioned about bringing VR support to the title, but really, even without VR, the sudden movements of the direction changes is enough to get you flustered and confused. I’d imagine I’d have a case of digital whiplash if I was going to try this game in VR. Oh, there is a bullet time button, hit shift and hold it and the world slows down. 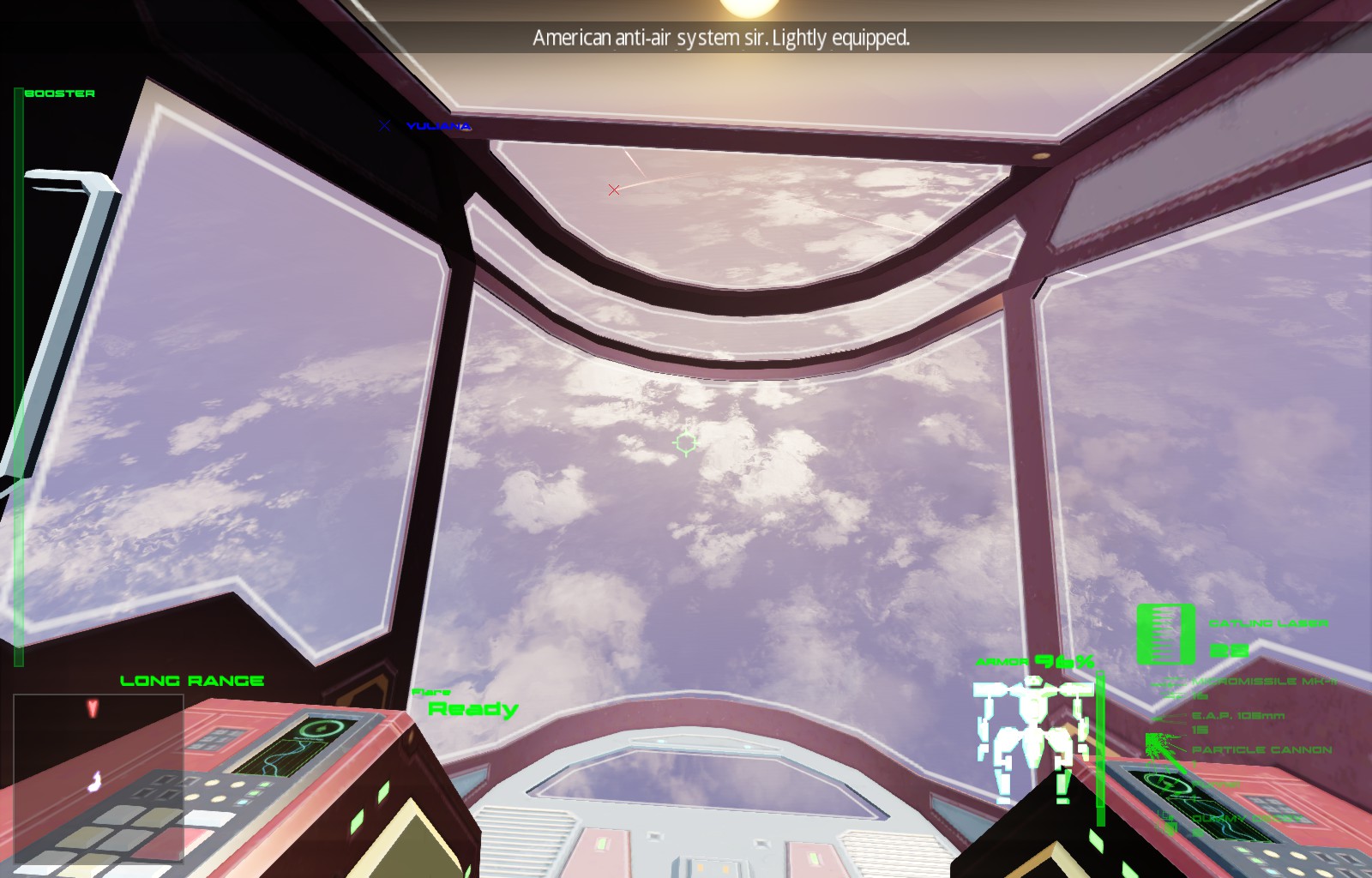 Graphically Project Nimbus is a bit all over the place. The actual style of the game comes across like it’s sitting on the edge of realism and a cell shaded style, and from a distance, the mechs and landscape can look very pretty, especially when looking towards the beautiful clouds and speeding through various weather dynamics, but up close things take a more fuzzy looking style, as if the quality has been significantly reduced. Get close enough to the water and you’ll start to notice that the texture map isn’t great quality, and that it’s just tiled. Get close to the ground and objects and you’ll notice that they were meant to be seen from a distance as the grass has no texture, the road markings are just distorted blurs, and everything is just simple polygons. The colours can be vibrant in some missions, and then in others they can go rather dark, and gloomy. But then, the environment is only visible for a short period of time before the barrage of on screen HUD elements bleeds your eyes dry. Locking on pops up a video feed of the target, there’s green notifications and elements all over the place, and trails and symbols flood your field of vision.It’s fairly distracting and jumping into cockpit mode only makes it worse by dumping your huge mech arms to the left and right of your screen. 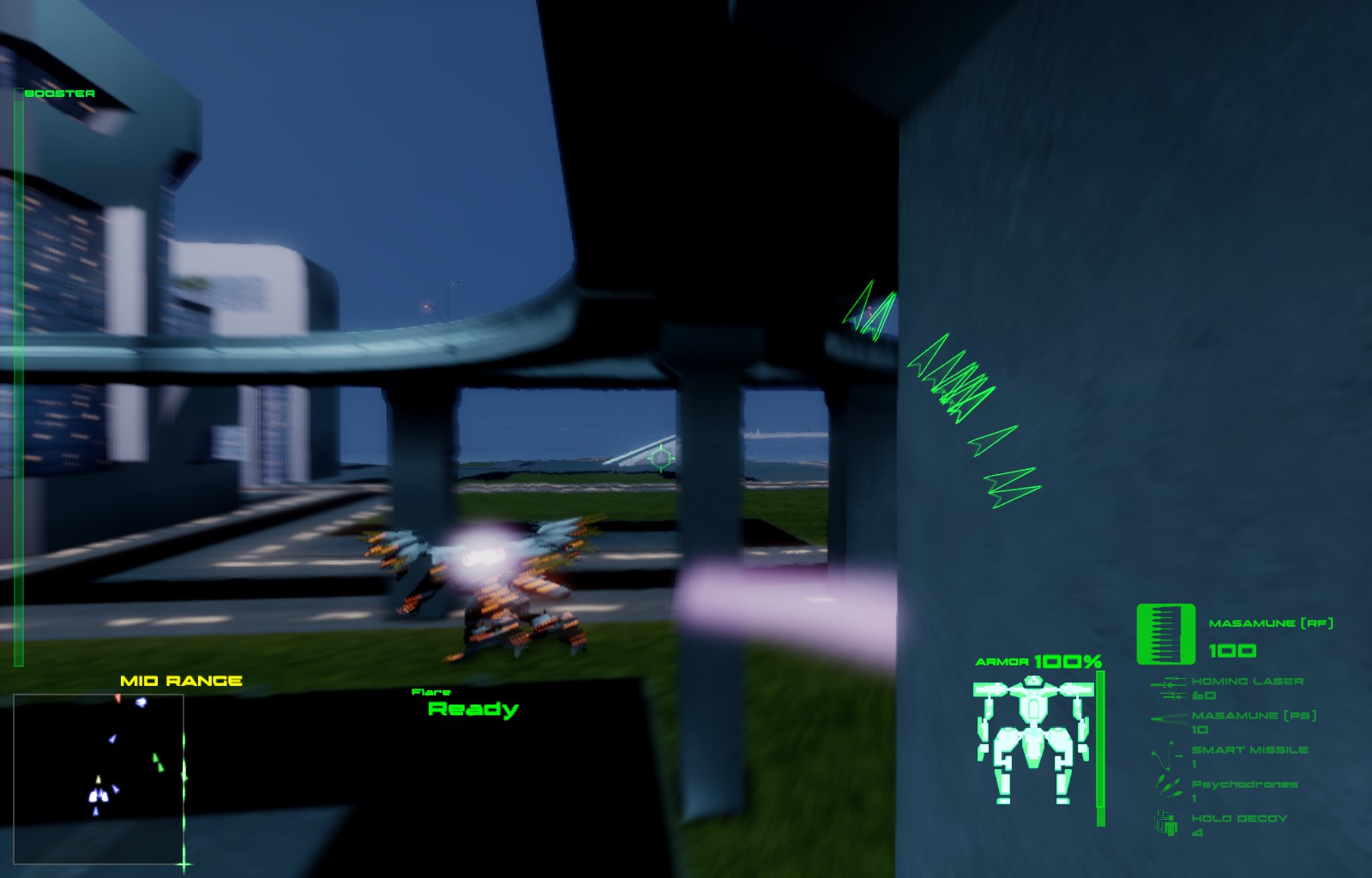 Project Nimbus sounds as you’d expect, very manic. There’s gunfire almost constantly going off, the drone of your jets, the voice overs adding some substance to the battle and indicating that you’ve progressed onto the next “stage”, and dramatic music that brings a barrage of drama to the game, and the diegetic audio is loud, powerful, and impacting. 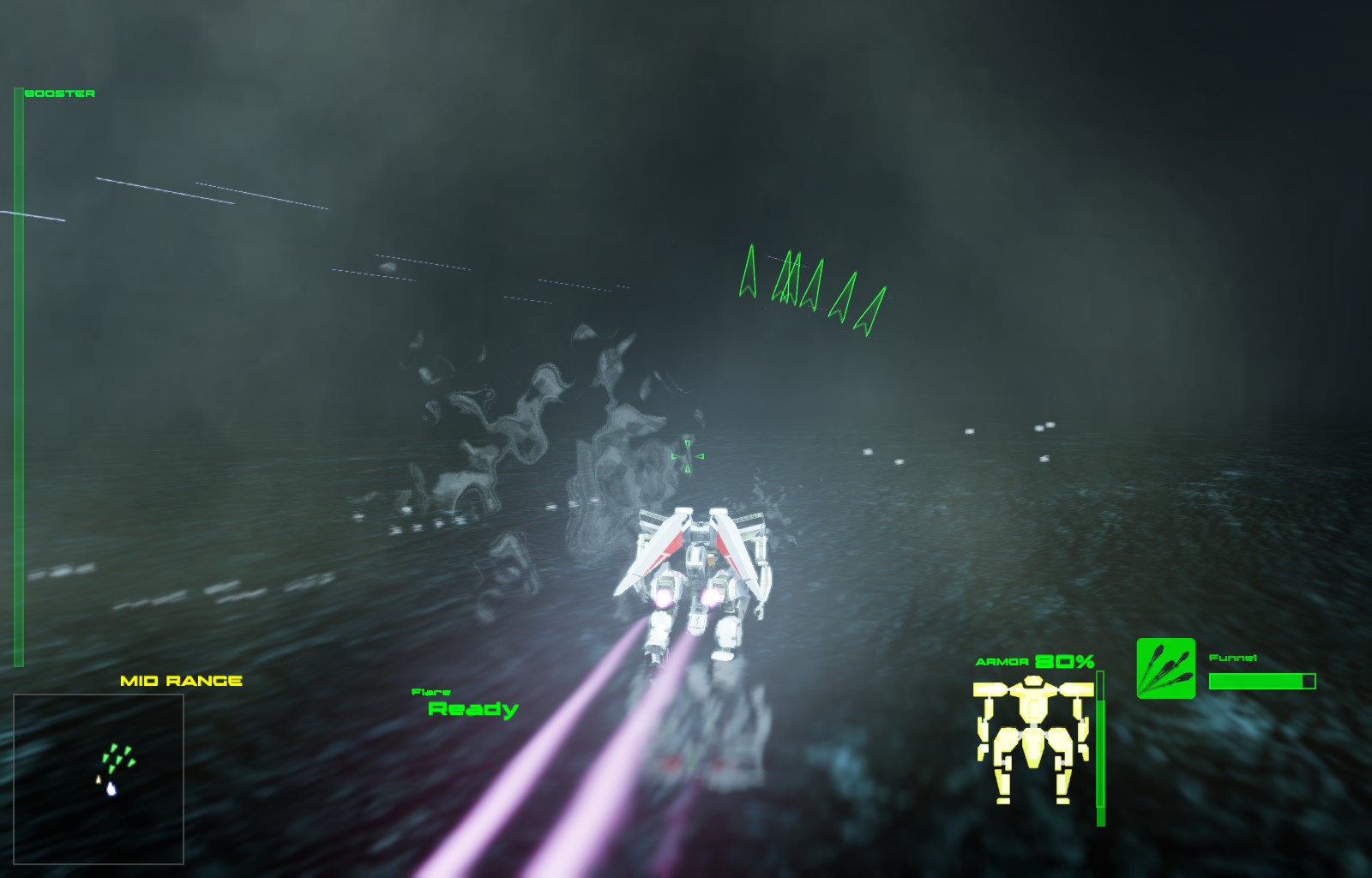 Weirdly, I’m unsure if it was because I received a review copy of Project Nimbus, but after the installation process and first booting up of the game, I was able to access any mission, and any act, whenever I felt like it. They weren’t, unlockable missions, it’s almost like being able to jump onto Netflix and choose to start 6 episodes in. While it totally allows you to break up the narrative, it does mean that you can choose to just jump to the next mission if you’re finding the one you’re currently on too difficult. Sadly, the fact it appears that you can do this does mean that there isn’t a sense of achievement to keep you wanting to play longer. However, should this just be a perk within the review copy of the game, then hopefully having to complete missions will serve a treat to spurring you on to complete the missions and progress. The survival mode can be rather fun, however after a fair amount of games it can begin to get rather repetitive. Although, if you’re a hardcore mech fan, I’m sure you’d get some fun hours out of this.

I’m going to give Project Nimbus a Thumb Culture Silver . It’s certainly fun, especially if you’re a mech fan, but it can also be a bit too fast and daunting for players unfamiliar with these sort of games.