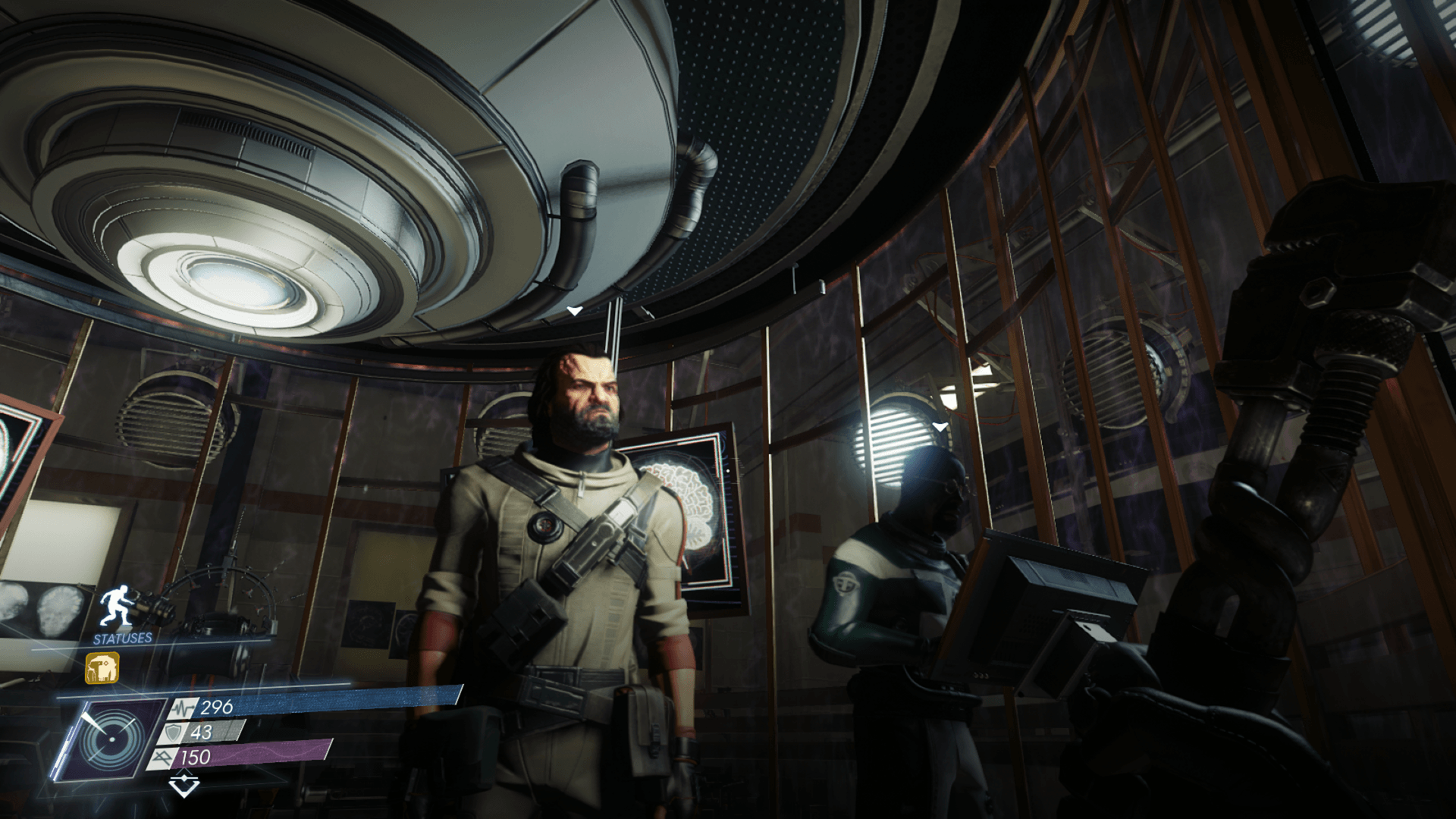 Developed by Arkane Studios, also known for Dishonored, and published by Bethesda, Prey was released back on May 5th 2017. You play as the scientist Morgan Yu aboard the space station Talos 1 in the year 2032. You and your brother Alex are part of the family company TranStar, who have repurposed the space station from a prison into an alien research facility. TranStar has been experimenting with the Typhon aliens to create neuromods which enhance and alter humans’ abilities, talents, and life expectancy. Everything goes to hell when the ship becomes overrun with the Typhon and you must venture forth to address the problem. The narrative is set in an alternate future, open world environment, which allows you to forge your own path. The game is more like a spiritual successor to 1994’s System Shock and 2007’s BioShock and less a follow-up to 2006’s Xbox 360 Prey.

After reading mixed reviews on Prey, I decided to bide my time and wait for the game to go down in price before finally jumping on board. There has been a lot of discussion lately around the gaming community about how games evolve and change from their release date launch state. It seems that consumers are rewarded with a more polished and patched game the longer they wait from the initial release. Games are being shipped with game breaking bugs, half-finished ideas, and a general lack of polish to meet a release date window and it seems like consumers are slowly catching onto this (we all know about ReCore, No Man’s Sky, and Mass Effect Andromeda…). The current state of gaming is at an odd and fascinating point where a games merit and score can change from its initial release state to many months down the road when developers have deployed multiple patches. We have even seen controversy over IGN’s Dan Stapleton’s initial review score of Prey 4/10 due to a game-breaking save bug that rendered his play through unplayable (which was later updated to an 8/10 once patched). You can check out his much-debated review here at IGN or check out Erik Kain’s perspective over at Forbes. So, with all that said, even though the game was released months ago, I still thought it would be worthwhile to give it a review. Note – I played the Xbox One version of Prey.

Prey was a game that I went into blind. Even after all this time I had avoided reading reviews and in depth discussion on the game because I knew that I would eventually play it and I didn’t want anything spoiled for. The only thing I had seen up to this point was numbered scores from a few websites and Metacritic. This is not going to be an exhaustive review of the game due to the fact that it has already been out 5 months.

Upon loading the game the story was immediately intriguing and you are thrown a plot twist right off the bat. This hooked me right away and made me invested in what was going on. The story element of the game was amazing at first, but as the game progressed I felt like it took a back seat and I wasn’t really that interested. I commend the game for hooking me so hard initially but the plot became weaker and more generic as the game progressed. I was more interested in the aesthetic, environments, open exploration, and ability acquiring gameplay.

There is something about games like this that really sink their hooks into me. I feel like I have to scour the environment for every single item, loot, and piece of ammo. The game is also rife with secret passages, dead bodies to loot, and upgradable suit and helmet chips to find. There is a handy system that allows you to track missing persons on the ship which allows you to loot their usually dead body. Some of the bodies are well hidden and extremely surprising where they have been stashed when you finally track them down. I remember one moment when the indicator HUD said the body was above my head. I had to vertically scale tons of pipes and outcroppings to reach this secret area which almost seemed like I was boundary breaking the game, but no, the developers did an amazing job of hiding stuff and have every intention of you exploring every nook of their game

I think this game is supposed to have a horror game vibe like System Shock and perhaps BioShock, but I never once found myself scared in any way. Perhaps I am desensitized, but the colorful pallet and graphics don’t scream “scary” to me like the drab and bleak world of something like Dead Space. I have heard of people not being able to continue due to the jump scares of the mimics getting to them but I never had that issue.

Throughout my whole play through I never ran into any bugs or crashes. I obviously don’t have a comparison since I didn’t play the game at launch but I am assuming most everything has been fixed and patched at this point. Perhaps a testament to rewarding consumers who decide to wait to play games? One thing that hasn’t been fixed in patches, which I’m not sure really could be, is that loading times between areas. You don’t encounter these load screens unless you are jumping from a major portion of the map to another. However, when this happened, I would find myself getting up to get a drink or wander around since they were so long.

I honestly think the end of the game was the most lackluster part of it. You end up having to do point A to B fetch and retrieve quests to either destroy the Typhon or destroy the Talos 1 space station. On top of that the game spawns an absurd number of enemies to deal with. The whole game I found myself wanting to find ways to kill every enemy, scan them, and loot them, but I ended up literally just sprinting past every single encounter. This was an area where I got hit with the long loading screens traveling across the station to complete the fetch quest. Unfortunately running past every enemy at the end and waiting for loading screens didn’t allow Prey to end on a high mark that would have matched the rest of the game. In the end, I did two playthroughs, one following the Human only abilities and one following the Typhon only abilities sinking more than 40 hours into the game.

The aesthetic of Prey is fantastic. It has a retro-future hybrid look that we have seen elements of in other games like BioShock and Fallout. The human designs and facial animations looked great as well as the various Typhon alien models. The phasing and tumbling look of the smaller mimics, electric, fire, and vapor effects of the larger Typhon, as well as the hulking phantom Typhons are all beautiful in their own way.

One of the most beautiful areas of the game is the Arboretum. The first time you come out into this area it takes your breath away. Lush trees, a waterfall, and out of control plant growth litter this area with a high arched vaulted glass ceiling that provides a peek out into space. To make it short, Prey is a joy to look at.

The sound in Prey is top notch across the board, although quite perplexing to me personally at times. All the robots have an extremely sinister sounding voices that is mixed quite a bit louder than the rest of the audio which seemed out of place. When you take heavy damage your suit also has a voice that chimes in to warn you about it and it has the same issue. Sinister sounding and mixed extremely loud compared to the other audio happening. There was also this weird high pitched ear ringing sound blended with a scream that seemed to happen every minute when you are outside Talos 1 floating in space. I was never able to figure out what it was or what the developers were going with it.

The Typhon screeches and transforming sounds set you on edge, the pumping bass footsteps and vocal sounds of Phantoms sneak up on you, and the eerily quiet sounds of floating in space engulf you. I play my games on a high end 5.1 surround system and can attest that the surround effects were great.

Seeing as I did two full playthroughs and considered doing a third “no powers” playthrough, I would say Prey is a game you can sink some serious time into and wouldn’t mind coming back for seconds. The gameplay is so strong and entertaining that the story can take a back seat on subsequent playthroughs. There is so much to do and so much to explore that on my second playthrough there were moments and small secret areas that I had already forgot about seeing during the first playthrough. Giving players the ability to essentially forge their own path around Talos 1 makes the replay ability even higher. You can choose to access areas in a different order as well as choose completely different solutions of how to fight or evade enemy encounters. It seems like no two playthroughs will be quite the same. Strong atmosphere, aesthetics, gameplay, exploration, and intrigue make Prey a must-play experience for fans of the genre.

I award Prey with the Thumb Culture Platinum Award. Although it is not without its small flaws and slightly generic story as it progresses, it sure is a gem of a game to play.