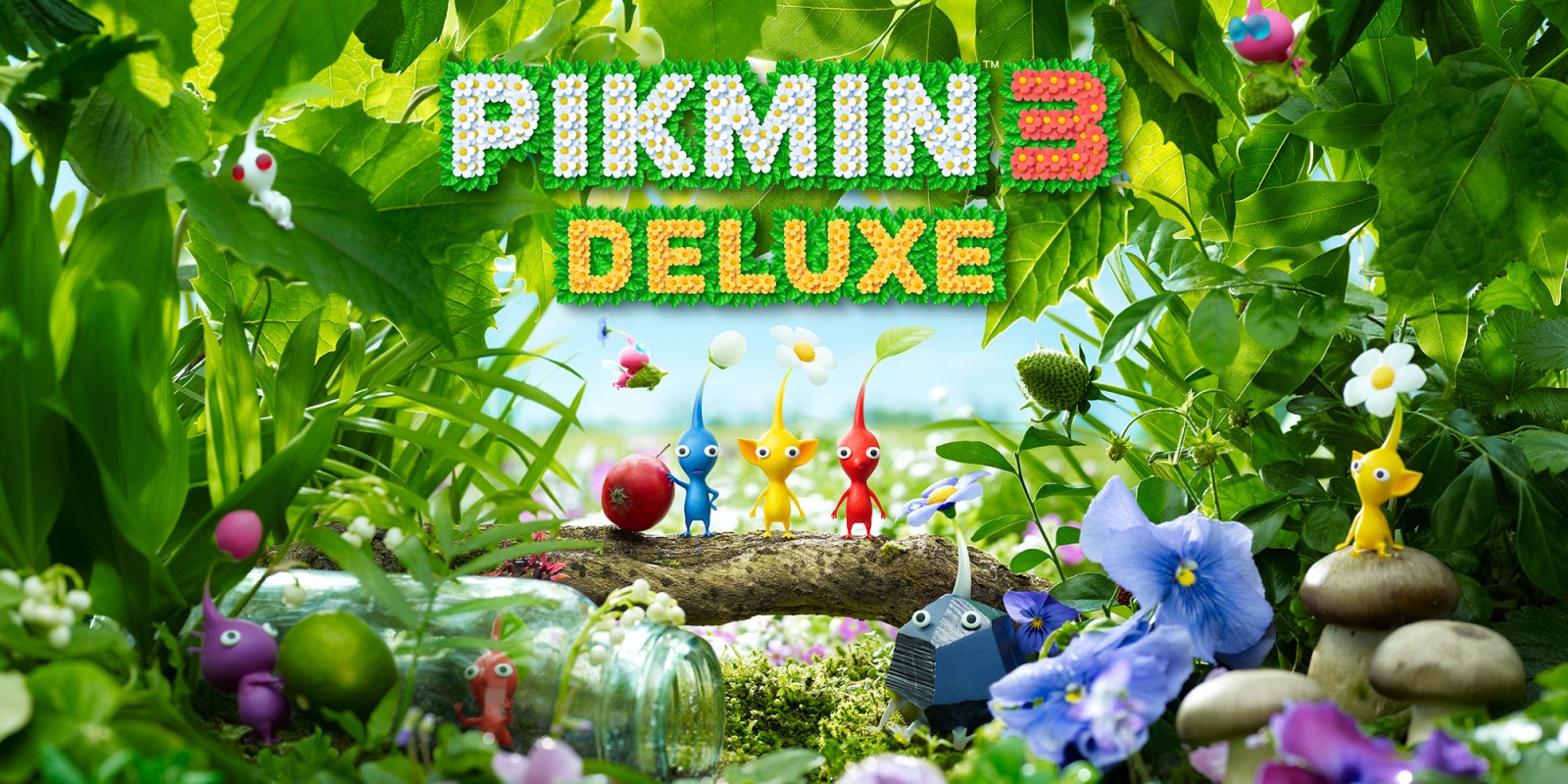 Pikmin 3 has returned from its WiiU limbo. Now I loved the WiiU; I am definitely a WiiU apologist and a big fan of Nintendo in general. Let’s be honest though, the console flopped and as a result, the games went largely unseen by a lot of gamers. Seeing all of these games make a welcome return to the Switch is brilliant and Pikmin 3 Deluxe highlights this. Hopefully, Nintendo continues this trend with the likes of Windwaker and Twilight Princess.

Pikmin first debuted on GameCube and whilst I did dabble in it, I never really played much of it. In fact, hearing the phrase “real-time strategy on console” is enough to make most gamers cower in fear. The series, however, has a huge following and there is even a much-anticipated Pikmin 4 in the works.

As I say, Pikmin 3 Deluxe is described as a real-time strategy game. Your immediate thoughts might include base building, armies, scientific research trees – this is not the case. Yes, the game is a real-time strategy, but it’s definitely in a style of its own. You play as a little group of aliens called Alph, Brittany and Charlie and quickly find things take a turn as their ship crash lands on a strange planet. At first this planet resembles Earth, however the fauna, critters and of course titular Pikmin are not of our world.

From the get go you start to discover various types of Pikmin – they have a different colour and look; ultimately this is a representation of what they can do. From the start you have the red Pikmin; strong fighters, immune to fire but fairly basic. As you progress you unlock different types including strong, rock-like Pikmin; these cannot be squashed, and can also do serious damage to crystal formations. There are also flying Pikmin that can traverse the environment in a unique way and also interact with higher objects that are unreachable from the others.

At its core Pikmin 3 Deluxe acts as a Metroidvania; as you unlock the various types of Pikmin it opens up new routes, new options and more importantly access to the precious fruit lying around the levels. This is where an odd design choice comes in with Pikmin 3 Deluxe. Every level you play has a time limit, representing the day, and at the end of each day, you have to drink some juice. This means you’re ultimately limited to how many days you can invest in the game on a single playthrough; it’s an odd choice and also one that doesn’t seem to lead to much as I quickly found myself with a surplus of fruit juice. It just seems to be an odd mechanic that implies an arbitrary time constraint on the game, though it does have some narrative impacts later on.

You’re only allowed a party of 100 Pikmin and your 3 astronaut-like aliens. This means it is up to you how you populate your party, do you have an even split of each type? Perhaps you’d rather have a flying only brigade? There are advantages of each and when I had made a poor choice I ended up losing 60 blue Pikmin to a well-placed enemy attack. There are also types of nectar you can collect to grow your Pikmin; it’s not immediately clear what this does but I assume it means higher HP, more power etc.

The most important thing about Pikmin 3 Deluxe is that it’s an absolute blast to play. As someone who barely glanced at the previous entries (I remember in my youth scoffing that Nintendo must be trying to capture the magic of Pokémon again, due to the similar name) I have absolutely loved playing the game. The mechanics are simple, but encourage some real depth and management in terms of how you send off your Pikmin to perform certain tasks. By the end of my time with the game I had 3 distinct squads I could jump between to solve certain puzzles or tasks. Sending a wave of flying pink Pikmin one way to take down a mini-boss, whilst my red Pikmin are clearing the return path of any trouble.

Pikmin 3 Deluxe, as mentioned, is a port of the WiiU game. What people forget about the WiiU is it landed before the Xbox One and PS4 and was one of the first consoles to start delivering HD titles as a standard. As such the game looks pretty decent; there are well made models that range from the relatively realistic environments, fruit and decor to the more stylised cartoon feel of the Pikmin themselves. A few of the larger bosses really did impress me with their detail and even the way the environment could be manipulated. One boss stomped on a muddy floor, this deformed to reveal puddles that provided a natural obstacle for most Pikmin types.

Now this is still a WiiU to Switch port; Pikmin 3 Deluxe isn’t going to win any graphics awards, but the gameplay runs smoothly, it flawlessly manages the the entire game map and still has 100+ characters on screen at once, even during intense sections.

Nintendo doesn’t shy away from the gobbledygook ridden voices with Pikmin 3 Deluxe; but it’s one of the few games where it works. These are aliens you control after all, so having the dialogue as text whilst they jabber on in their language really does work. Each Pikmin also manages to have its unique soundbites, which is enough to help you focus on intense battles by sound rather than relying on looking around the UI in the heat of the moment.

Beyond that Pikmin 3, Deluxe doesn’t really do anything new; it has a relaxing soundtrack that knows when to ramp up. Also, all of the enemies and ambience help set the scene; gigantic roars out of the bosses mixed with the squelching of mud from 100 pairs of feet.

Pikmin 3 Deluxe will probably land somewhere between 10-20 hours depending on if you’re going to mainline the story or explore and try and collect everything. Personally, I kept finding myself drawn back to the earlier regions as I unlocked new Pikmin to explore with.

On top of that as this is the deluxe version of the game it adds a lot more content than the original had. Not only is there a 2-player mode now, but also a slew of multiplayer mini-games and challenges. These are locked down to local play only, but there are online leaderboards if you’re feeling competitive. Pikmin 3 Deluxe also includes all WiiU content with the DLC as well as some new Pikmin not available in the campaign.

Pikmin 3 Deluxe is quite frankly brilliant. There are a few design choices that seem arbitrary to me, but they don’t impact the core experience. Landing, unleashing 100 Pikmin with a range of skills, and exploring the world is great fun. The game doesn’t take itself too seriously, and it never overreaches on challenge either. It basically just leaves you with a satisfying gameplay loop wrapped up in a simple, but comedic narrative.

I’m awarding Pikmin 3 Deluxe the platinum award and I am now more excited than ever for Pikmin 4; a game that Shigeru Miyamoto confirmed to be in development back in 2015. Now, I need to get back to digging up a banana on a beach that some sort of crab is defending… 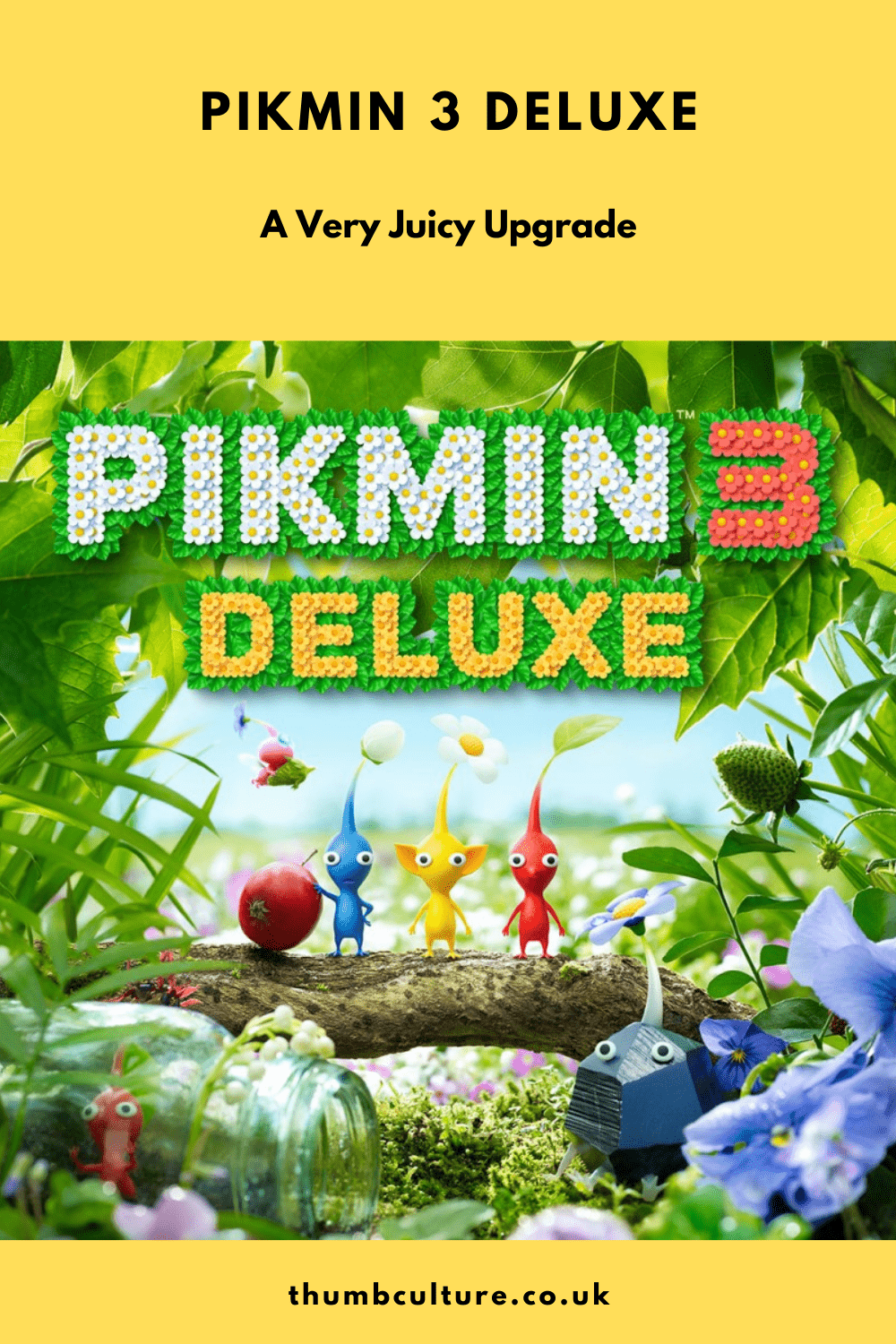