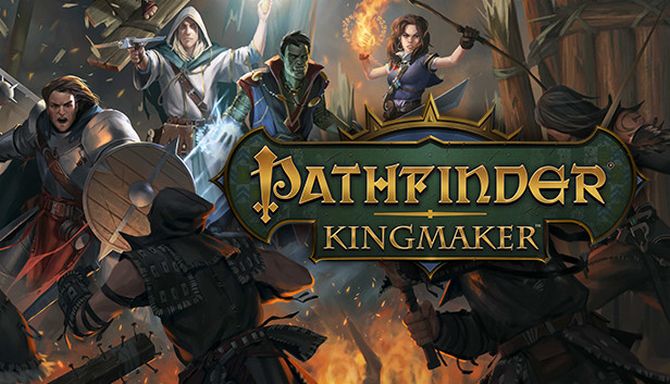 Owlcat Games have dug deep into the Pathfinder universe to bring us Pathfinder: Kingmaker. Start from humble beginnings and begin your epic quest to rule the lands. Pathfinder has been a popular role playing game for many years and Owlcat Games have brought the experience to the keyboard warrior. Time to strap on some full plate and grab my shield, I feel a campaign coming on.

Pathfinder: Kingmaker is set in a 3D isometric view. You can zoom in and out, but that’s all the control you have. Use your mouse to control the players and get them to interact with the items in the scene. There are several useful functions as well, such as pressing Tab to highlight anything you can interact with. This saves time, a lot of time.

You play whoever you want really, just choose a class and a race and then get into the detailed character creation aspect, or simply choose a premade character to play. Without giving too much away, you have three months to complete a quest, upon completion of this quest you get to become baron of an area. You then have to split your time between running a barondom(?) and adventuring. You can automate the running of your barondom if you like, but personally I think that is part of the fun.

Basically in Pathfinder: Kingmaker you start out on your own, but soon pick up companions along the way. You can have up to six in your party, so choose wisely who travels with you. You adventure together, gain experience together and increase levels together. There is a lot to decide when levelling up, so plan ahead as levelling up does not happen that often.

Equip your team with armour, weapons, scrolls, potions, capes and all manner of paraphernalia to make your journey as safe as possible. Sell items you pick up and buy good stuff from merchants. The party has a weight limit it can carry, so choose the best items to loot off the dead bodies. You will have to kind of ignore realism for a bit as you travel with 38 pieces of armour, 35 swords and bows and crossbows, but as long as it’s all under your weight limit you will be fine.

There are plenty of quests to be found, choose what you do and don’t want to do. Try not to get too bogged down in the irrelevant when your empire is crumbling.

Running your empire is hard, well basically I sucked more than a cheap hooker at a glory hole. I spent too long on side quests to get experience and sadly my empire went into unrest. I used my companions as advisors so that I could assign tasks to complete, but it seemed that they were not that good at running things either. Do a good job and you get rewarded, you can take over neighbouring lands and build more towns. Make your empire prosper and who knows what riches lay in store. Well I don’t for starters, I need to rethink my strategy. I advise saving a lot.

The space bar is your friend. Pause the game and make sure you have your tactics right. If the fight is hard, use what enchantments you can first. Death will come a fair amount, but a change of tactics can swing a fight in your favour. Generally the characters will use their AI to work out what would be best, but sometimes this is not the case. Make sure you check what spells are going to be used first. Take out mages and archers, don’t just get involved with the grunts. Use your abilities during combat to secure the much needed victory, and strap useful things to your belt as well. Sometimes you and your companions will get stuck and not be able to work out how to get to the enemy, but just guide them there manually with the help of the space bar. Pathfinder: Kingmaker makes a varied team a powerful team.

Travelling around the map will force you to make camp. Everyone in your party has a role to play at camp time, so put them to use doing what they are best at. You can and will often get attacked whilst camping. This is a pain, but it’s all experience points, so mustn’t grumble. You will also have random encounters on the roads that you can embrace or just try to evade.

One of your characters, Linzi, is writing a book, and Pathfinder: Kingmaker uses this feature very well. Often you will have to make decisions that come in the form of a story. You read the text, then decide what to do. Making good decisions will get you experience, or bad decisions may affect you later on in the game. This was a feature that I really liked about Pathfinder: Kingmaker, well thought out and well executed.

There is very little grinding in Pathfinder: Kingmaker, the plot moves along at a rate that you sometimes don’t know what to do first. If you are not strong enough to win a battle, then there will always be some side quests to do, or places to explore.

Pathfinder: Kingmaker as aforementioned uses a third person isometric view. This generally takes the pressure off the graphics department, as is the case here. Every object, person, building and general scenery looks as it should. The world takes on a dark a mysterious front when storms come. The lightning would scare a dog behind a sofa as it bursts into view and then fades away. The atmosphere was very captive for the game style, and credit is due for a job well done. The character portraits were very good, conveying exactly how you would assume the characters would be. I also really liked the little sketch drawing when Pathfinder: Kingmaker used the storybook sections. These made it feel like everything was happening as it should whilst also providing a visual of the situation.

In Pathfinder: Kingmaker, a lot of effort has gone into creating the personalities of your companions. This is also reflected in the voices during conversations. It made me feel like I was getting to know them, and it also encouraged me to not want to let them down. There are additional vocals when casting spells and all the effects of a full blown kobold battle as well. Everything acts like it should in the universe. There are of course the few annoying phrases that get uttered along the way, and get uttered again, and then a few more times just in case they were not alloying enough the first time. The storm audio adds a lot to the atmosphere of the game, it can get very immersive.

Pathfinder: Kingmaker is a worth computer based foray into the Pathfinder world. Owlcat Games are on the money. The vast variety of classes and alignments means that you can play the game over and over and still enjoy it. You can mix up your classes as well, gaining levels dually. This just adds to the fun, can you create the perfect weapon? I’m sure as I continue my quest to save my empire from the clutches of rebellion I will grow to like this game even more. It is what it is though, no zombies to massacre in waves, it’s a steep learning curve, but one that is well worth mastering. Whether Owlcat Games go for a sequel or simply create new DLC, I will be in the queue to get my hands on it.

Disclaimer: We received a code to carry out this review. It was brought to us by a devious kobold who tricked us into this amazing review. Who knows when the charm spell will wear off. Revenge will be had.