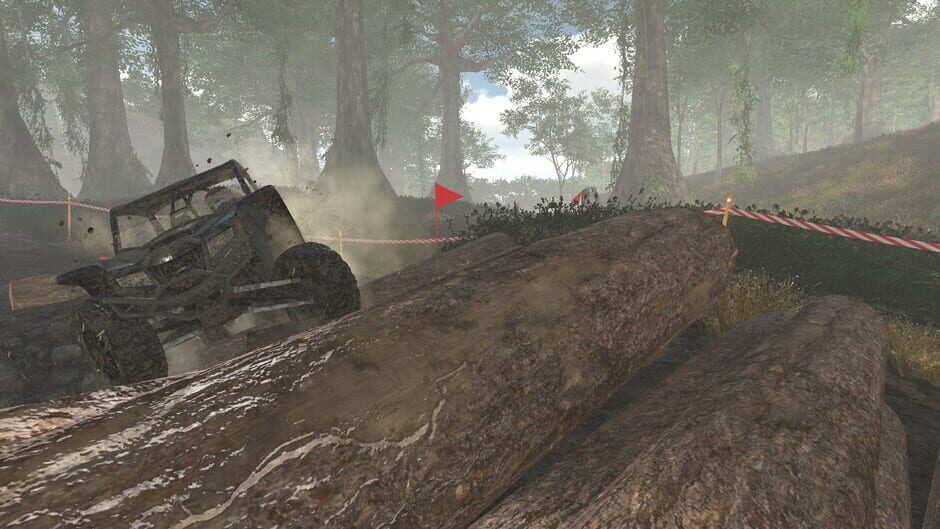 Every time I hear the word off-road I immediately think of the Off-Roaders from the Fast Show (showing my age again) and mud. Lots of mud. This winter has provided lots of the latter and the prospect of reviewing an Off Road game sounded a bit like my daily drive to work at the moment. Overpass has been billed by Swedish developers Zordix AB and publishers BigBen Interactive as unique in its genre offering a realistic take on off-road driving with over 20 officially licensed quads and buggies to be driven over technical obstacles along wilderness tracks. So does Overpass deliver on the dev’s promise? Well, as they said in the Fast Show “Lets off-road”!

The opening menu offers four basic game modes – Quick race, Career, Custom challenge and Multiplayer. Quick race is your classic pick up and play mode where you can choose from all of the games “venues” tracks and vehicles and start racing straight away. Custom challenge lets you create a race series using the venues , tracks and vehicles in the game.  As I was reviewing pre-release the online multi-player lobbies were completely empty so I was unfortunately unable to see how this mode plays. I will definitely revisit this after the game releases.

Career is the most in depth mode in Overpass and sees you take part in a 12 round season to race your way to a place in the world finals. You compete against 15 other racers with only the top 8 after the 12 rounds earning their place in the end of season finale. During the course of a season you compete in various races or challenges and depending on where you place you earn money to buy new gear for your rider, new vehicles and upgrades to your existing fleet. If you successfully work your way through the various reputation levels you will receive sponsorship deals that provide you with new vehicles, exclusive upgrades and cash bonuses. Bizarrely I found that after each 12 round season my stats reset. My cash however remained the same and carried over to the next season, and in fact cash can be earned in all game modes. This does encourage replay of the mode but I found that the fact I started as a rookie each time a bit annoying. The career mode also requires you to maintain and repair your vehicles and to pick the right vehicle for the terrain you are racing on. I found this very hit and miss and it was frustrating to pick the wrong vehicle and have a torrid drive around a course. It’s something you will pick up with experience but I found the game did not give you much assistance with this. The races/challenges are very varied with some being single lap races and others multiple laps. Some challenges comprise of multiple races on various circuits and some just single lap affairs. It’s not at all repetitive and I found it held my interest easily.

Whatever mode you play in, the challenges/races are essentially the same. The venues and courses are varied comprising of working quarries, vast canyons, tropical shorelines, jungles, forests and other wilderness areas. The terrain also varies with sand, mud, gravel , scree slopes which all require a different approach. My usual approach to driving games is to hammer the accelerator and career around the track as fast as possible without crashing. That approach simply does not work in Overpass and a slow a steady approach is often needed with some obstacles and some need to be hit at an angle as opposed to head on. This took some time getting used to but did mean that I played the game in a more considered strategic fashion.

The other difference between Overpass and other games in this genre is that each race/challenge is undertaken entirely alone against the clock. There are no other vehicles on the track and you only find out how you did against your fellow competitors at the end of the race. I do think it would be useful to have split times displayed and an idea of your current rank but that might just be personal preference. I did manage to turn on ghost vehicles whilst on quick play but wasn’t able to work out how to do it during career mode (no doubt somebody will find it if it does exist).The lack of other vehicles on the course does help you concentrate and makes the experience a bit less stressy and frustating.

Obstacles in Overpass  come in two forms, natural and man-made. Natural obstacles include giant boulders, trees, rocks and steep slopes. The latter can be particularly challenging if you have chosen the wrong vehicle for the course. There are a huge variety of man-made obstacles from giant seesaws, jumps, tunnels and ingenious uses of tyres and logs. The respawn button is your best friend in Overpass allowing you to reset yourself and try again if you get stuck or overturn your buggy or fall off your ATV (a particular talent of mine). During the race you can switch between 4wd and 2wd and use the differential lock. This was particularly useful if I got stuck and helped me to traverse tricky obstacles.  The devs have gone for realism with Overpass and you do have to adapt your speed and driving style to each different terrain. In my view this makes the game challenging and interesting and much less repetitive than other driving games tend to be.

With an off road racing game there is going to be a lot of browns, yellows and greys with all the mud, sand, gravel and scree. This is all present and correct  in Overpass but beautifully rendered. The vegetation, the water, the rocks and boulders are all well done. The various weather effects are excellent and at times make the game play quite challenging. The various licensed vehicles are realistic and the livery can be customised as can your driver. To be honest however both vehicle and driver soon get plastered in mud and dirt so it’s a bit academic really. The various locations and terrains are varied and look great.  I did have a few issues with draw distance on my first play but after installing an update this seemed to disappear.

The pumping rock track as you start the game screams off road racing mud and speed. The same type of tracks plays over the menu but that’s about it for music. During the race the only sounds you hear are the roar of the engine of the particular vehicle you are using. The engine sounds are painfully realistic and I actually winced as I could hear the engine on the verge of burnout when I regularly got stuck on a muddy slope. You can hear the wheels spin and the thump of the vehicle as you exit an obstacle. The absence of in-race music is barely noticeable but I think this is down to the fact that you really have to concentrate during the game. It very much adds to the realism and is a welcome change for a racing/driving game.

There is definitely lots of replay value with Overpass however some players may be put off by the season system for the career mode. The fact that everything pretty much gets reset after each twelve round season may frustrate some players. The addition of DLC with extra courses and vehicles would definitely help and hopefully the devs will deliver.  The addition of multiplayer both offline and on will also keep you playing again. As stated earlier I was unable to fully explore the online mode due to fact I was playing pre-release and I will be interested to explore this mode further when there are more people online.

Despite my initial frustrations with the game and the reset issue with career mode I really enjoyed Overpass. After I accepted that pure speed was not the best policy I enjoyed the challenge of navigating the various obstacles and trying to beat my previous times. It was a bit odd just racing against the clock as opposed to other vehicles but it made me less rushed and led to me taking a more strategic approach. There is a definite simulation element to the game and it is (I imagine) as close to the real thing as you can get on a console. The solo against the clock racing is a fresh and fairly unique approach to a driving game and is surprisingly enjoyable. Overall Overpass is a fresh and enjoyable take on the genre and highly recommended.

I give Overpass a Thumb Culture Gold Award