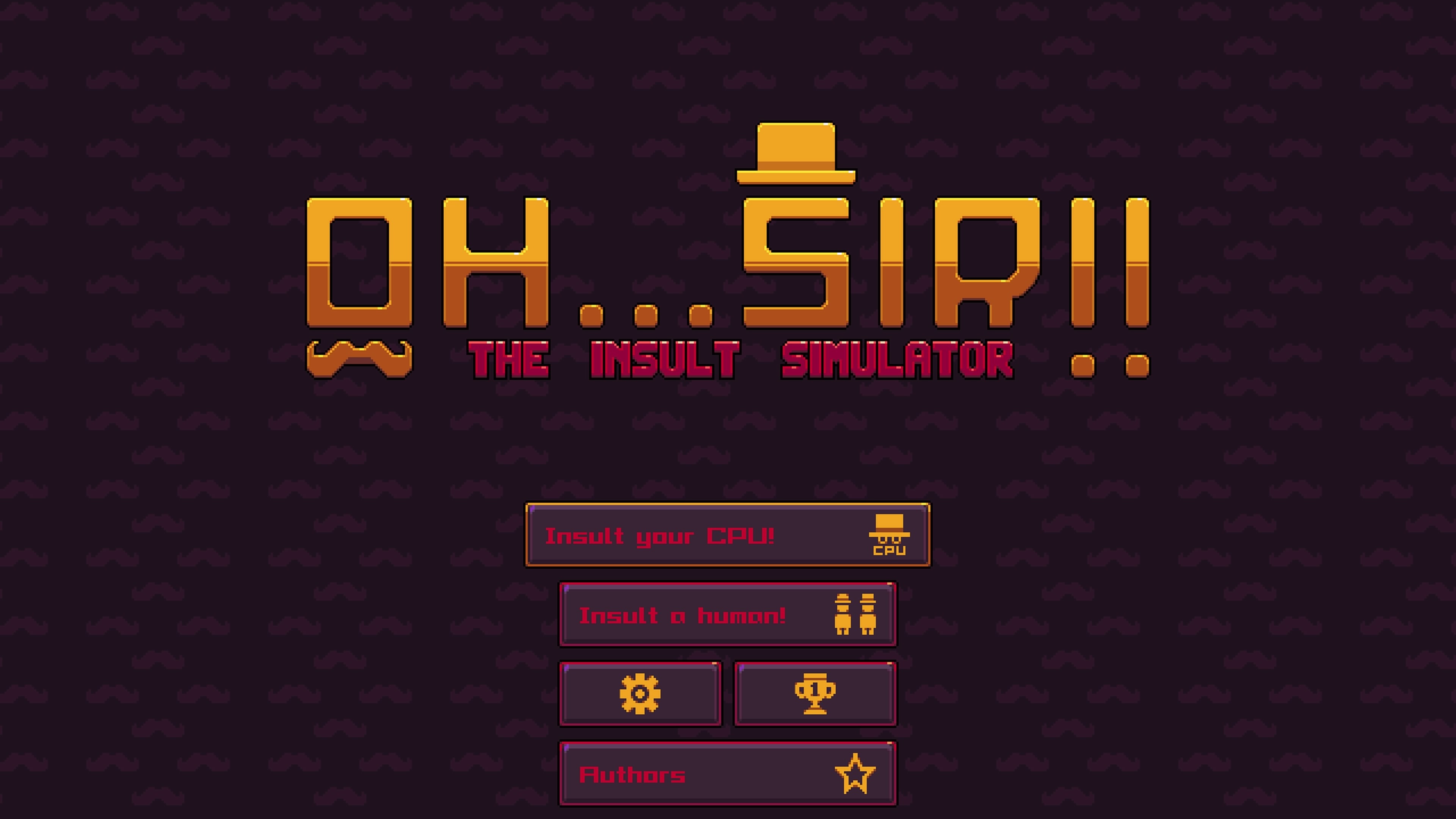 Oh…Sir!! The Insult Simulator has hit consoles, and with it comes insults so cutting that you will feel like a paper snowflake at Christmas by the time you are finished. The game is developed by Vile Monarch and published by Gambitious Digital Entertainment. Coming in at only ~350MB you would be entitled to think that this game was light on fun, and you would be wrong!

So what exactly is Oh…Sir!! well its exactly what its title suggest, an insult simulator. You take the reigns of one of many characters, each with their own personalities and sore spots and head out on a short journey to insult people and defeat them.

Its straight forward 1v1 gameplay, set out like a fighting game with a health bar at the top of the screen. With a few games modes available including a tournament against the CPU which see’s your character go on a journey of discovery through five scenarios. Alternatively you can opt for a straight-forward battle against any of the CPU characters. Then you have against another player either online or couch co-op, there is something for everyone, and whilst you might think that its game modes are on the light side, with each battle being totally different Oh…Sir!! is just about right!

Heading into each round you are greeted with a list of words and short phrases, these are what make up your insults. To take big damage you have to piece together realistic insults, so there is no point saying “your hovercraft never watched Star Wars” as this isn’t going to go a lot of damage. Finding out the weak spots for your opponent is the best way forward. Another way to take big damage is to combo your insults. Concentrate on insulting one thing consistently, be it a family member or the opponent themselves.

There is a multitude of combinations that you can create, and deal out big damage. You can even skip the round you are in with the ellipse […] that you see, this allows you to put together even longer insults so that you can go for huge damage.

The game can produce some ridiculous insults including “your mother secretly adores your sister”, “Your face was born in your father” and my personal favourite “your face and your seat have bum cancer”.

Oh…Sir!! is a great way of being able to insult even your closest friends without fear of any actual fisticuffs.

Probably the only area that lets this game down is it’s graphics. Oh…Sir!! is as straight-forward as tetris was on the gameboy, does this make the game any less fun, not at all! The game shows off it’s character models well, the areas where you fight are well animated. With the characters showing different animations when you are dishing out a diabolical insult you get a visual idea of how insulting you are being.

Each character has been voiced perfectly for the kind of person they are portraying from the cockney geezer to the Russian doctor. There is even a Morgan Freeman impression in there for the final character in tournament mode. Each insult gets vocalised through a series of snippets and even though you can tell there is a cut between each word, it is relatively subtle.

With the game having a huge number of combinations to create with each insult the game can potentially last quite a long time. However, my main worry is that with only 5 rounds in each tournament mode it could get boring at some stage. Although with the recently announced Hollywood Roast add-on coming for PC, let’s hope it makes it way to the console port quickly to add more ridiculous insults.

So overall the game is a healthy dose of sarcasm and with the ability to bring Star Wars and even Windows Vista into an argument you really can’t go wrong. The only thing that lets this game down is the simple graphics. In the words of Oh…Sir!! The Insult Simulator “Your Face and your mother never watched Star Wars and gets a Thumb Culture Silver Award!