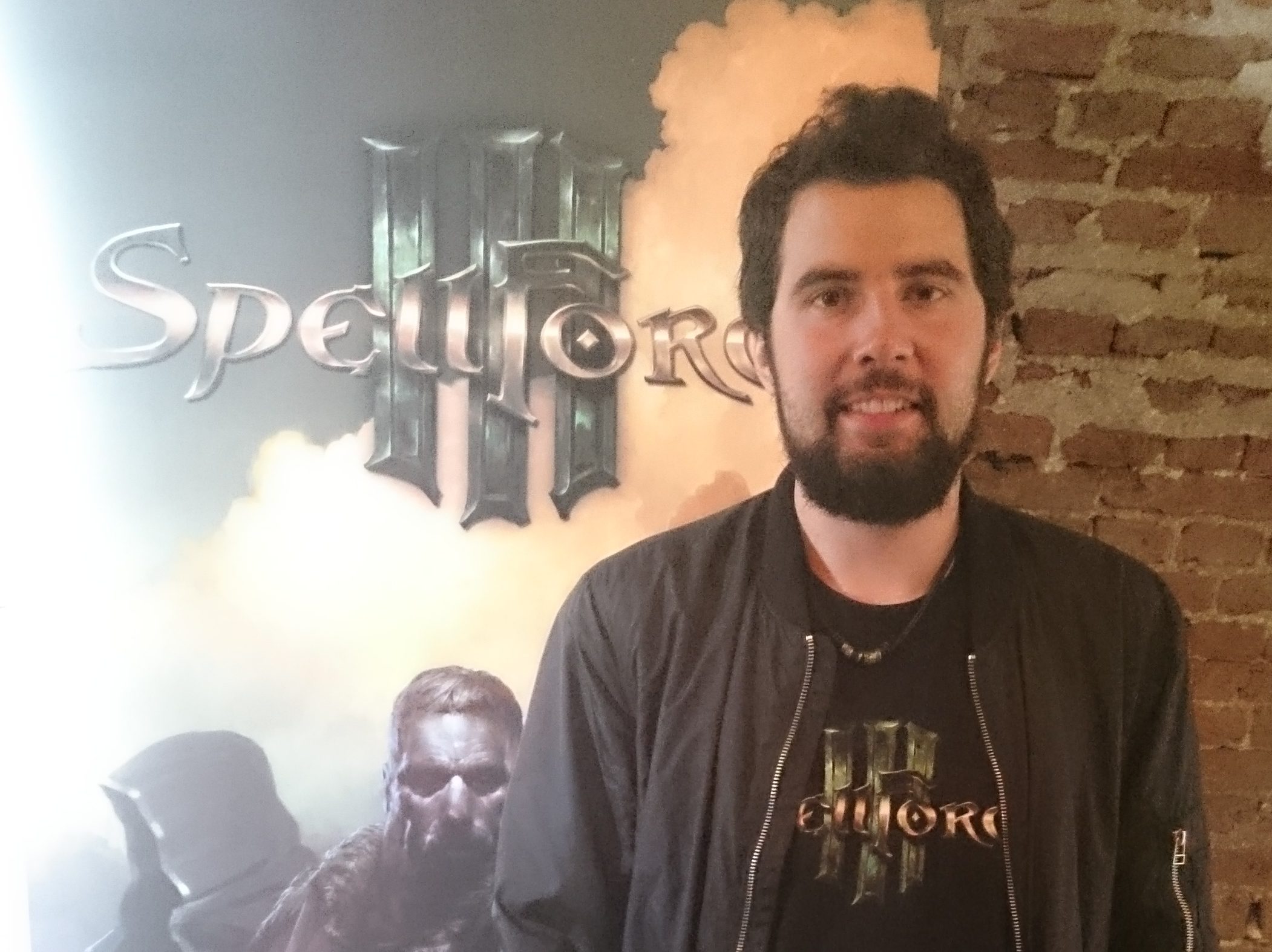 As part of the THQ Nordic London ShowCase last week (click here for the event details), one of our writers, Jason, was lucky enough to meet SpellForce 3 & Elex Development Director Reinhard Pollice.  Having played both of the games he was keen to have a chat and answer a few questions that we had for him.  Enjoy!

Jason:  Hi Reinhard, so you’re one of the developers behind Spell Force 3?

Reinhard: Yeah sort of, I take care of all the projects at THQ Nordic and Grimlore Games which is an internal studio for THQ Nordic, I am their studio manager and development director. I’m wearing a lot of hats!

Jason: So a lot of pressure.

Jason: So I’ve had a go on ELEX and SpellForce 3, which I’ve really enjoyed. My first impressions of SpellForce 3 are a cross between a command and conquer/diablo and even settlers. With this sort of building the buildings and expanding the lands and conquering the sectors.

Reinhard: Yeah the thing is its funny you mention Settlers as SpellForce 1 was made by the creator of Settlers and he did SpellForce 1 and 2 with his team and then he was bought by Electronic Arts and did another RTS which was pretty cool actually. It wasn’t a big success, I think it was called Battleforge, it was based on cards which represented units and buildings. So yeah, our ideas were to mix those ideas together and plant them in a natural way while not sacrificing that on one end or the other. So that was our goal and our inspiration was a bit of Company of Heroes with the sectors and a bit of Age of Empires with how it all feels and a little bit of Baldur’s Gate with the RPG, so a little bit between Baldur’s Gate and Diablo. 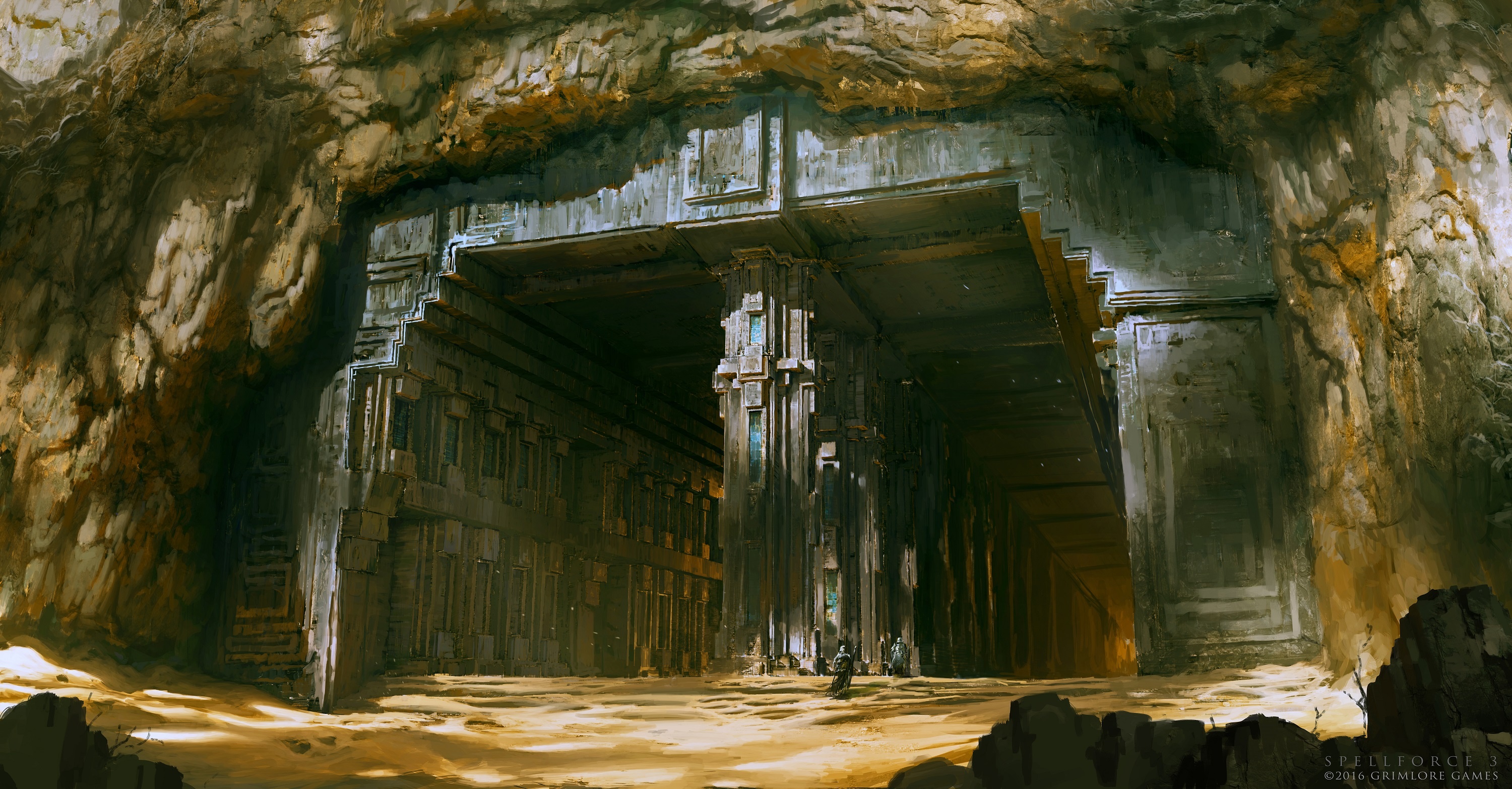 Jason: That’s cool, so where did the idea for SpellForce3 come from?

Reinhard:  So when we started SpellForce 3 , we analysed what made the series strong and what it was known for. So what we wanted to do is focus on one genre and make a good game, but in the end we came to the conclusion that it may just be another RPG or another RTS, even though there aren’t many RTS around so we wanted to do the unique thing and focus on the mix. We tried to come up with ideas on how to combine them better and one of those ideas was the worker system whereby you don’t directly control them but rather manage the economy from a micro perspective so you have time to go back to your heroes and explore the world.

Jason: That’s good, so do you have any ideas for expansions or DLC?

Reinhard: We have some ideas but I don’t want to say much at the moment as nothing is set in stone. We would love to do some things but we want to see how the game goes first.

Jason: Ok, so how would you explain the game to someone new, like me?

Reinhard: So I would start by saying this is an RTS/RPG mix, so if you’re familiar with things like Starcraft, Age of Empires, you have this part but you also have another part where you have heroes and you need to learn skills, gather experience, find loot, craft items and equip them in the right way and also combine all of this with other party member’s skills. What’s cool about the game is you can play the story mode in co-op so you can play fully co-op with a friend online or in LAN. Then if you’re more looking for competitive play, there’s a skirmish mode where you can fight against others.

Jason: Ah that’s right because you started doing your testing the other day didn’t you? Like 1 vs 1 humans?

Reinhard: Yeah exactly, and its Orcs next.

Jason:  Is that all going alright so far?

Reinhard: Yeah, we’ve been impressed by how many players are playing so far and the feedback has been great and everyone picked up the references we based our game on. It doesn’t show anything about the story mode but we feel like it gives a good idea of what the game systems are like and how they work together, so it’s really interesting and great for us to see the feedback first hand and improve the game gradually so that we can polish it and balance it. 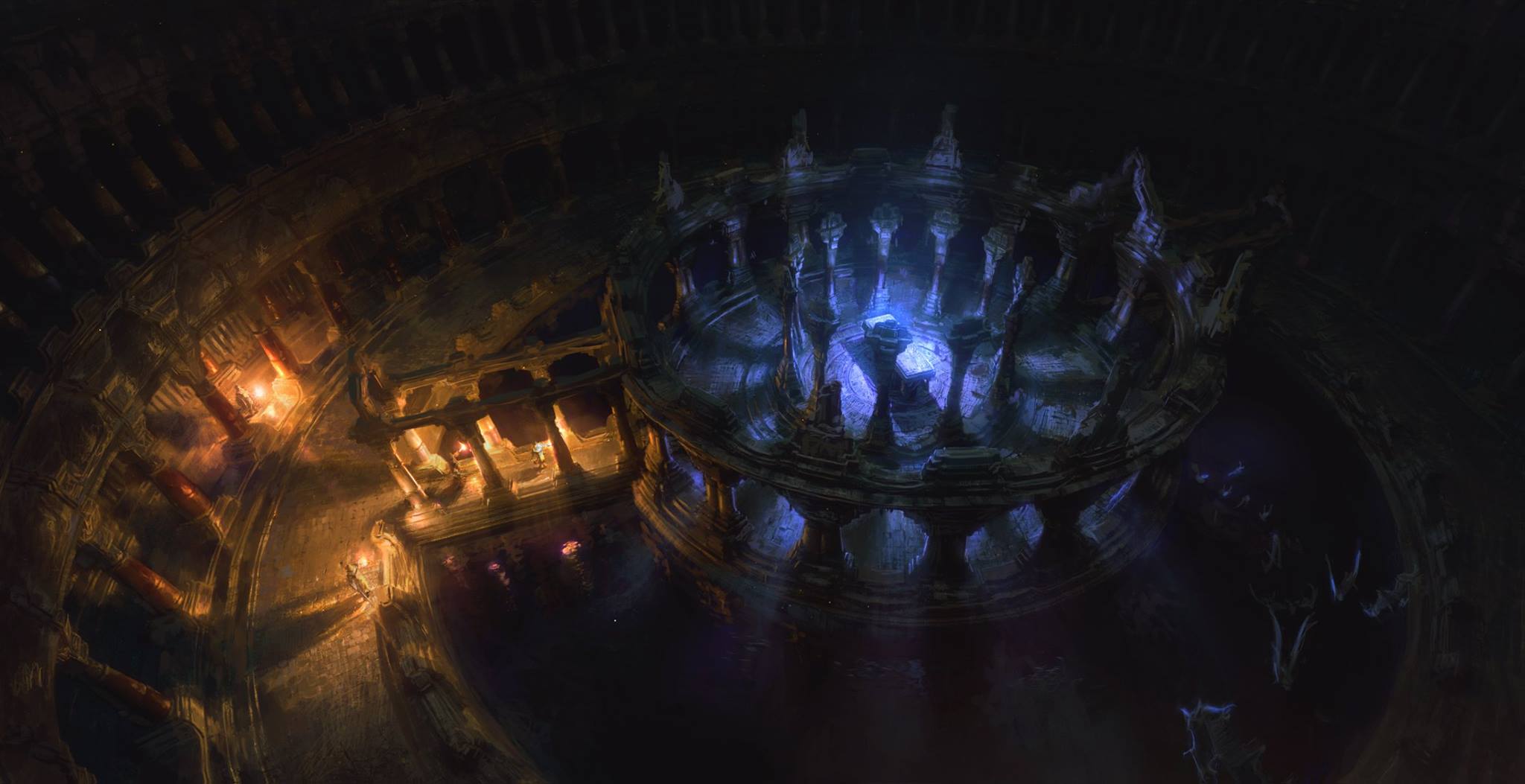 Jason: So has SpellForce 3 turned out as you expected?

Reinhard: Ummm, I think it’s actually better. The development was really challenging because we started Grimlore games at the end of 2013 with 5 people, we now have 35 people, we have built our own technology up.  We designed our multiplayer around our whole new system, so yeah it was really challenging, but I think we’re totally up to speed and if you compare what we do with other top down games such as God of War, Halo Wars, you won’t notice any difference. Ok well maybe cinematics but do you think they are really necessary for the core experience?  Maybe not right?  We also have our story moments and things, so yeah it’s great that we’re totally on par with all these big guys.

Jason: Were there any difficulties in creating the SpellForce 3?

Reinhard: I wouldn’t say any specific difficulties but the normal difficulties. We had to go in and change stuff like the economy section, it was a big risk as we didn’t know how it would feel, would it turn out alright? and would the player pick it up and get it?  It would have been easier to just say hey, take game X and clone it which is sometimes smarter especially for new teams but we went the opposite direction. Sometimes I wasn’t sure if we would succeed but we are over the moon with the end.

Jason: SpellForce 3 is looking really good! I also had a little game of ELEX earlier are you able to talk about that?

Reinhard: Yeah I’m one of the producers of that game as well so I know quite a bit.

Jason: Yeah, so my first impression of ELEX is its vastly open world and nearly everything kills you, haha. I died an awful lot!  The story, there’s quite a lot of narrative to it isn’t it?  There are a lot of decisions which seem to effect who you’re talking to.

Reinhard: We wanted it to be a simulated role. You should matter because I mean, you’re the main character but I feel like choice is what spices up an RPG.  So we went in and created these systems where there are different factions and these factions are reacting to you, so there are two layers where people in factions are reacting to you and then there’s the personal layer where each NPC has its own character arch and depending on those, they will have different reactions. 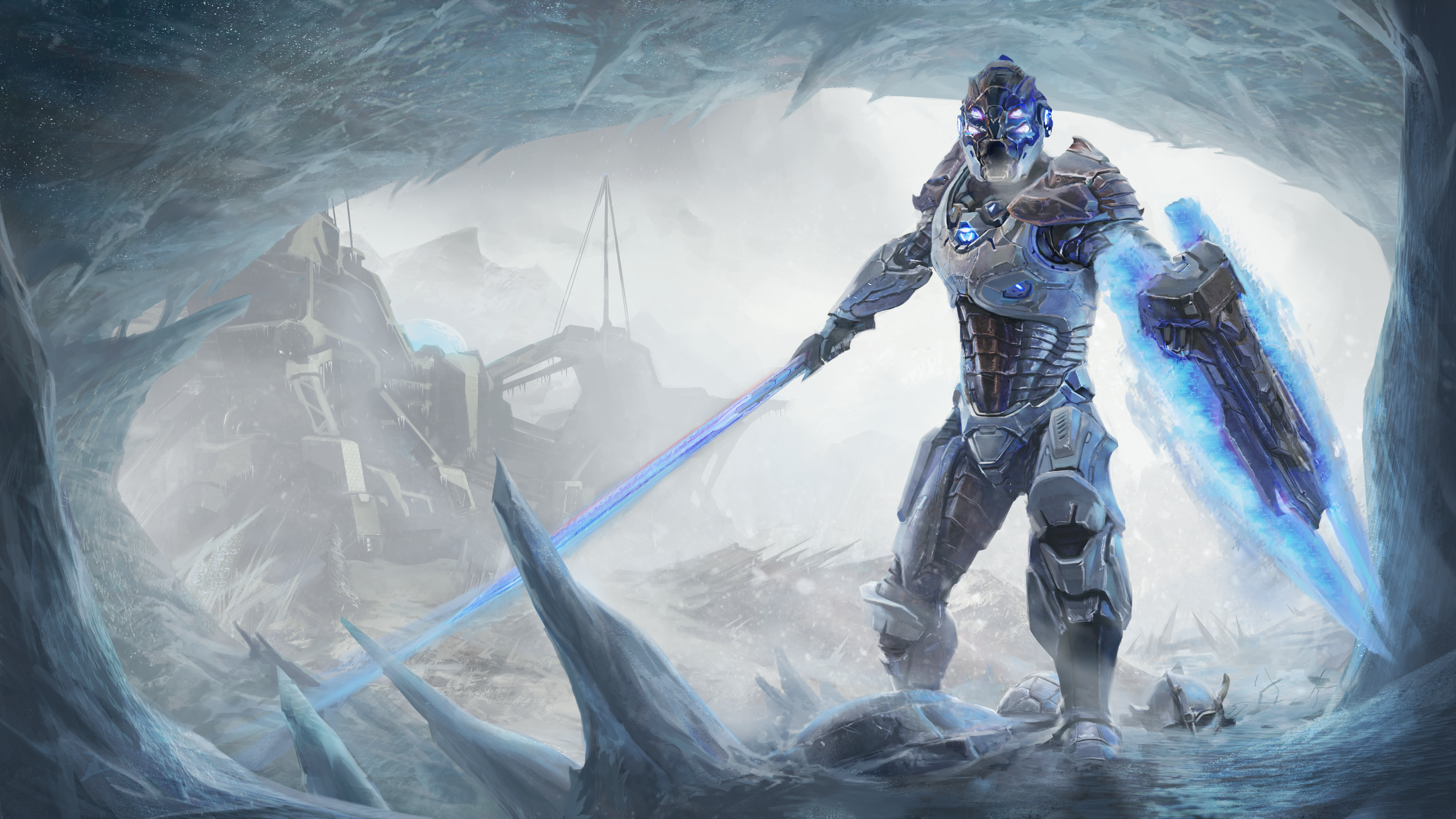 Jason: When I first came up to a Berserker, I decided to try and be cheeky to him and be a bit pushy and bulshy and it actually came up saying that he liked it, so I was like ah ok.

Reinhard: Yeah, so this is how you interact with NPCs and how you kind of find your own identity through your choices.

Jason: So how long do you think it would take to complete that game?

Reinhard: Umm, if you push through then probably 40-50 hours on the main quest but if you want to find everything then probably 60-100 hours. And the thing is, there’s loads of alternative ways like so there’s replay ability and after the end you can still carry on and finish all the side missions and the cool thing also is that the NPCs will react to what you did.

Jason: So with how you can influence NPCs, are there multiple endings?

Reinhard: Yeah there will be different endings.

Jason: Thanks for your time Reinhard, I look forward to both games when they are released and goodluck! 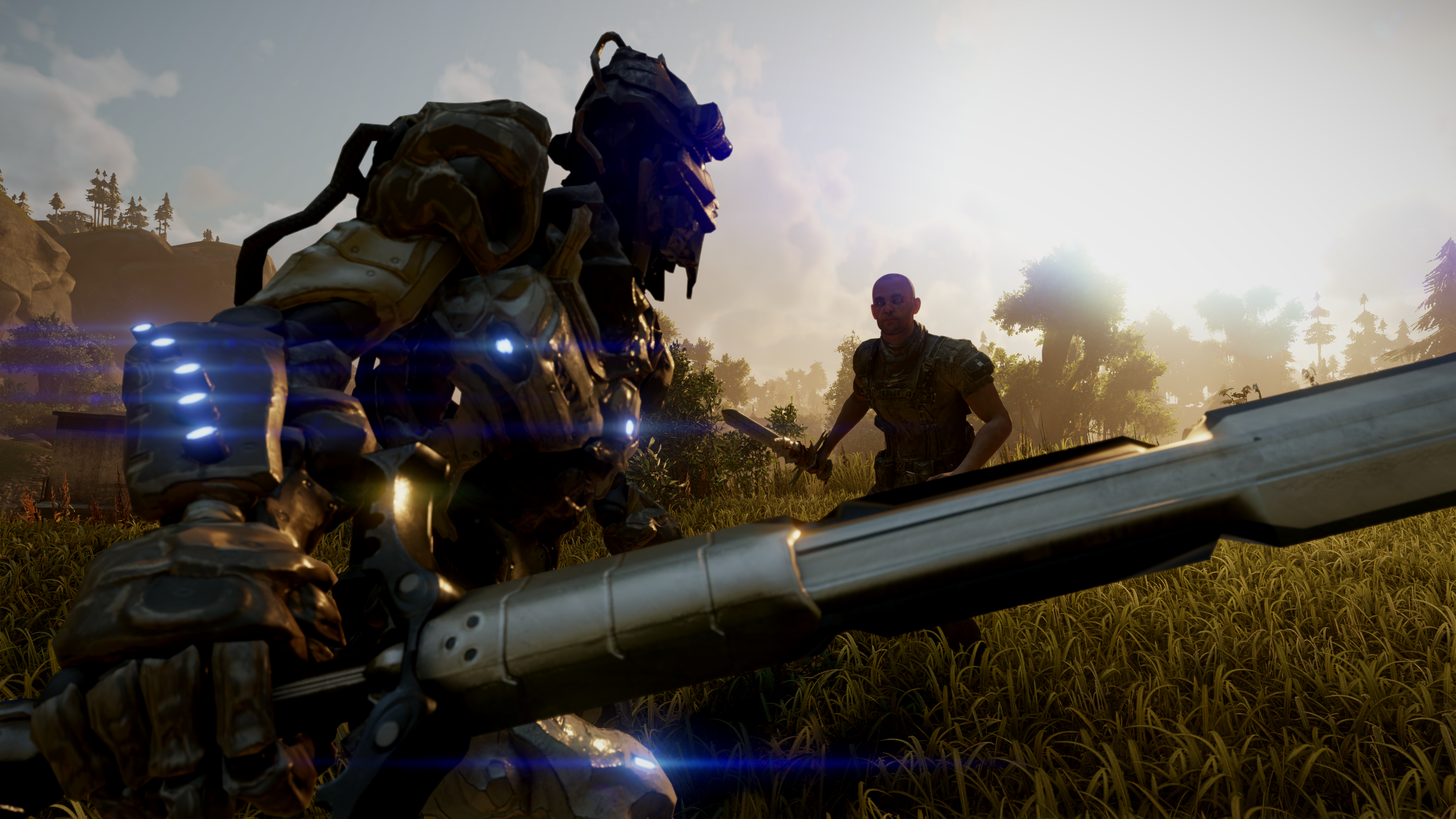