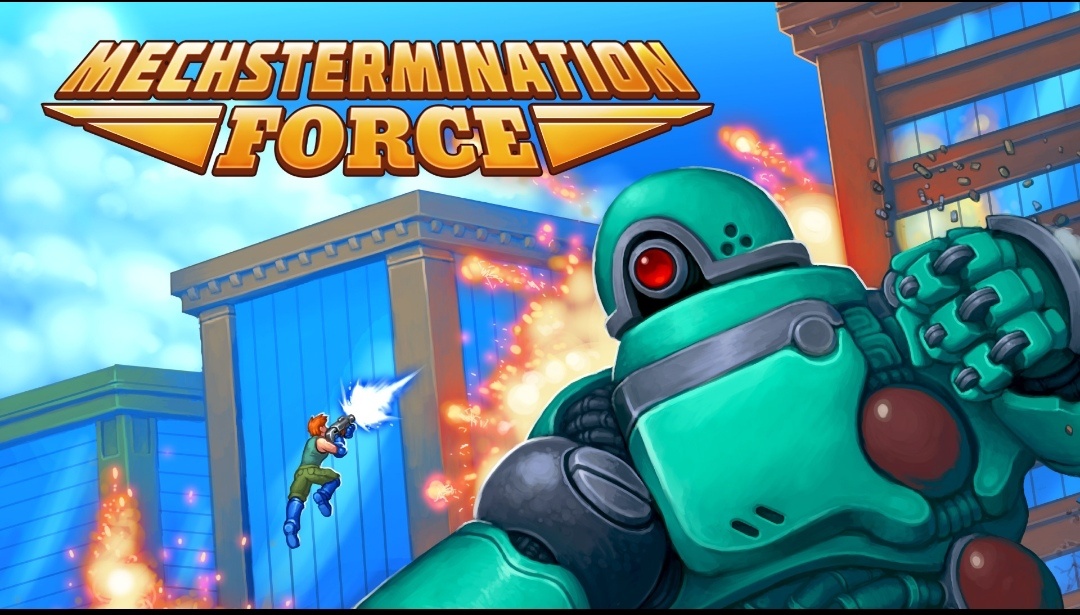 Have you ever jumped straight into a game whilst skipping tutorials and suddenly regretted doing that because you’ve no idea what on earth is going on? well, how about a game that doesn’t even give you the option to skip it, throws you in the deep end from the very moment you start the game without a safety net. Mechstermination Force gives you the challenges you need and more.

Humans vs transforming robots, I’m sure I’ve heard of this kind of thing before, although Hörberg Productions Has produced a game, not like any other I have played before, from the mechanics to the multiple bosses and guns this game left me wanting more!

You’re a member of the titular resistance, well the only member (unless you have a friend around you can duo this up with)  if I was to be truthful I believe the other guys just weren’t good enough to survive, sucks to be them hey? you can choose from a selection of pre-made characters as to who you want to be, none have special perks or anything just different hair or genders! You’re thrown straight into the deep end by the boss man saying he doesn’t have time to explain what to do so I found myself getting familiar with the buttons and gameplay for a good part of 15 minutes, finding out I only have one gun, one oversized sledgehammer and a  really little jump ( which I never actually was able to get anywhere with ) shortly after I realized I could shoot, and knew my bullets were damaging a specific point of the little robotic dude I started to really kick some butt!

It soon dawned on me after maybe two or three enemies that these guys are all .. boss level creatures ranging from the typical robot man to robot birds, snakes and even a crocodile! there were multiple ways to kill them and each and every time you got a new guy you soon realize they have all got different weakness points, many of them took me a few deaths to figure out exactly where I was supposed to be hit but I got there eventually! the good thing is the robots are extremely repetitive in what they do, meaning you can work out their routines, work out their weak points and use that to act against them and shut them down!

As you progress through the levels and collect coins from destroyed robots you can use the coins to go visit the cute little fella in the base shop! you can purchase new weapons, more permanent lives and also a temporary heart that will go once you’ve been hit by an enemy (sure saved my bum a few times ) for a lot fewer coins! if you find yourself short on coins have a look around the base, you’ll find some quirky little characters – injured soldiers from your force, they will give you subtle hints and you’ll find an arcade machine next to one, when you click on this you can replay all of the previous levels you have already done, to beat your own time, to get a star for no damage taken and you can also collect more coins whilst replaying it!

Shop man also designs and produces cool new items for you such as magnetic gloves and jumpy space boots – so you can climb the robots and hit them where it really hurts, many times the robots have a few parts that come away so you can climb in and around their body, just make sure the sneaky little thing doesn’t find another way to damage you or shoot things at you.

The graphics for Mechstermination Force genuinely surprised me although it is very much a cartoon style game, the colors were vibrant, there was a variety of motions such as fire, lava all pretty well detailed and thought out all of the action that happens!

The audio was great, simple upbeat jingles that keep you in the mood to keep fighting enemies, as above where you can find the arcade machine on the base there is also a grammar phone where you can choose to listen to the multiple songs played throughout the game!

Mechstermination Force took me around six hours to complete, which I feel was just not enough, I can go back and replay the fourteen levels to beat my previous scores, to gain extra medals for taking no damage during the battle or even add another controller so a friend can come to play with me and have some fun with local play, I feel they could have added a few other modes for it to give extra options of gameplay, maybe even online so you can play as the enemy rather than the hero would be awesome! I enjoyed this game so much and I’m excited to see what other games Hörberg Productions come up with! despite what I feel is a pretty short campaign I’m going to award the Mechstermination Force the Thumb Culture Gold Thumb!

Disclaimer:We received a code to complete this review