As somewhat of an MCU novice, I was excited to have the opportunity to review Marvel’s Avengers, the superhero-packed action role-playing brawler developed by Crystal Dynamics and published by Square Enix. I say novice, but what I really mean is a total newcomer. Having only recently started to work my way through the Marvel movies (I’ve just finished Captain America: The Winter Soldier), I can confidently say I approached this game with an almost entirely blank slate and zero expectations.

Whether or not that’s a good thing depends on your position as a Marvel stan I guess, but if this game has shown me anything, it’s that you don’t have to exist in the world of the superhero to actually become one. Prior knowledge of this universe is helpful to some, but certainly not a prerequisite when it comes to enjoying the masses of content that Avengers has to offer. But more on that in a moment. 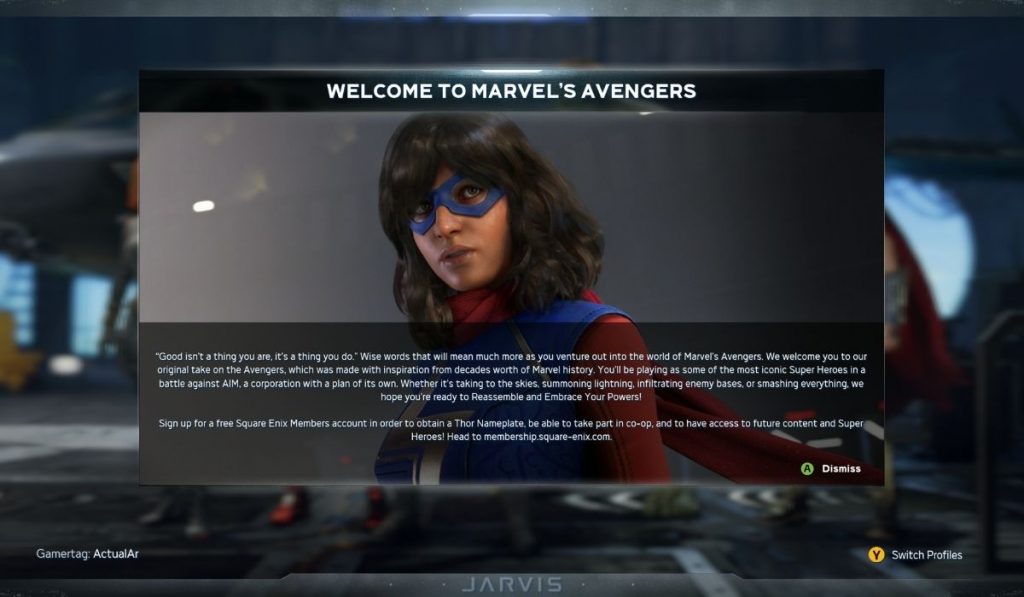 Possibly my new favourite hero ever

Having played the campaign mode through to completion and dipped into the multiplayer side of the game, one thing I can tell you is that this game packs a lot into its arsenal. There’s an incredible amount of collectables, gear, faction content and cosmetic items to amass in Avengers. This review will be focused primarily on the single-player content and may return to the multiplayer aspects at a later date.

With such a lot to do both during and post-campaign, it’s clear that Avengers has set itself up as a solid starting point for future expansions/DLC. Let’s go back to the start though, and look at the starting point for what I’m sure will be an exciting and evolving gameplay franchise if the narrative experience is anything to go by.

In its campaign mode, Avengers provides a third-person combat and exploration experience, unlike anything I’ve tried in recent years. At its heart is a standalone cinematic story experience, focusing on the origins of Kamala Khan, a character I thought had been designed purely for this game but apparently is a legit part of the Marvel Comics. Told you I was a newcomer. 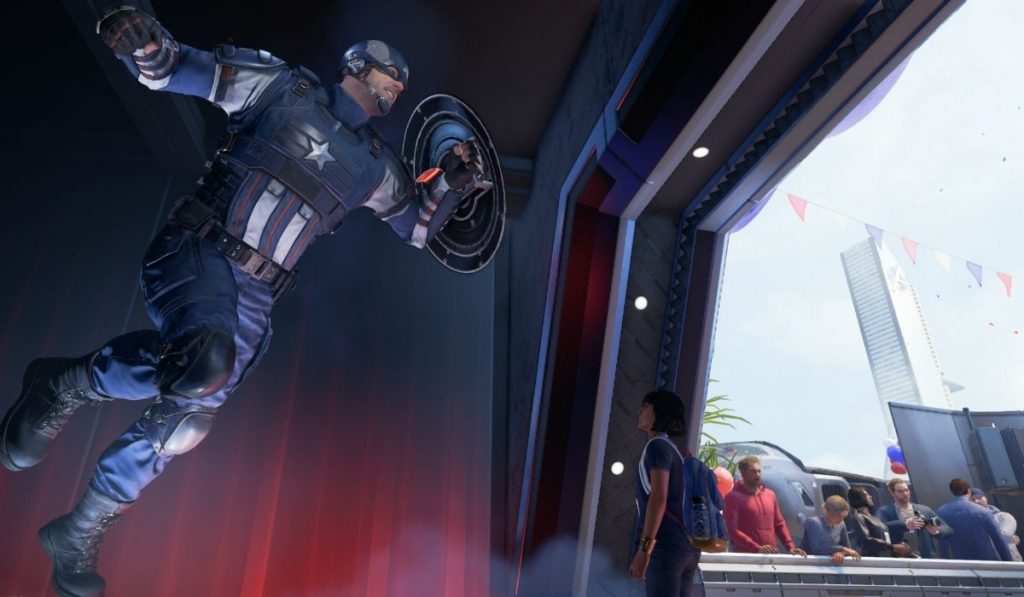 They say never meet your heroes, right? Well, in this case, we can make an exception.

Anyway, Kamala’s story starts on A-Day, where five of the Avengers are gathered to celebrate a new state of the art Avengers HQ in San Francisco. Kamala’s there as the winner of a fanfiction competition, and for me, playing through this introductory segment as the young Kamala was one of the most immersive parts of the whole game. You really get a sense of who this young girl is, and her love for everything Avengers (and heroism)-related permeates throughout the narrative as a result. It’s on A-Day that young Kamala first meets Captain America, Black Widow, Thor, Iron Man and Hulk (as Bruce Banner), and it’s on A-Day that her world is suddenly turned upside down after a mysterious attack that causes a catastrophe that the world blames upon her heroes. 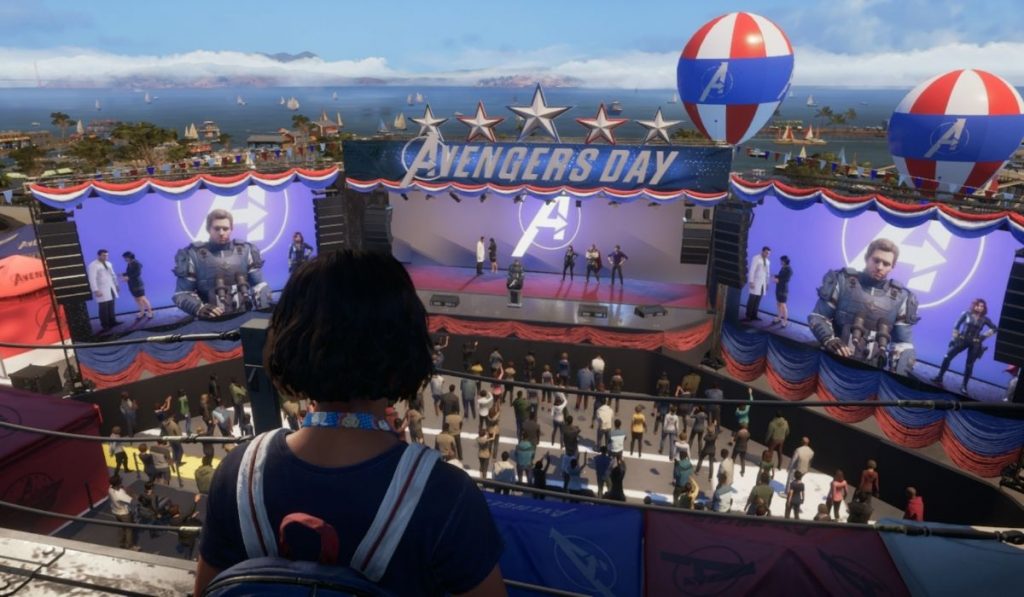 It all goes a bit tits up from here, unfortunately.

Fast forward five years and we’re reunited with a teenage Kamala, who lives in a world where superheroes have become outlaws and AI rules the country with a robotic iron rod, thanks to the all-encompassing authority of a science-based tech organisation named AIM. It is at this point that we learn that Kamala is now ‘inhuman’ as a result of the aftermath of A-Day, something that AIM considers to be a disease that needs to be purged from humanity. Which is nice of them.

With the world under threat from the ever-encroaching creepiness of AIM, Kamala sets out on an epic mission to find and reunite the Avengers, and so your adventures begin. As you progress through the main story, you’re able to play as all the heroes you unlock along the way. 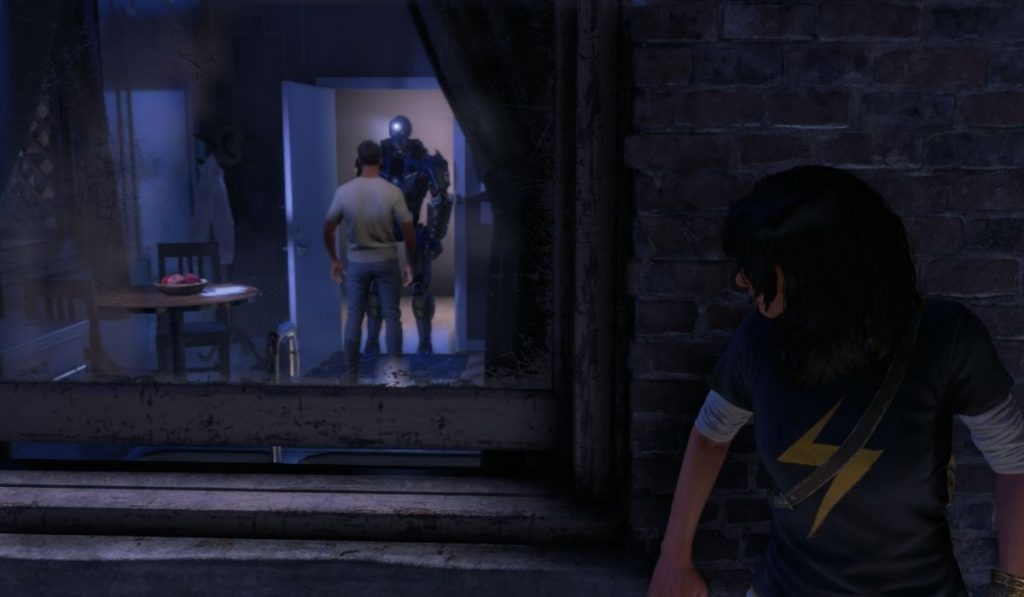 This was an exciting gameplay twist for me, as you’re presented with a whole new skill tree for each character and a range of new heroic abilities to master. Switching between characters as you progress provides an enjoyable level of challenge, and allows you to get a feel for which hero’s playstyle you connect best with. Which is something I expect will come in useful during post-campaign and multiplayer content.

As mentioned, customisation options are aplenty, with character-specific missions and gear to help you level up your hero of choice. There are also faction quests and rewards, as well as enough comics and cosmetic items to keep you playing for hours. I’ve put some hours into this game and believe me, I don’t think I’ve even scratched the surface of what’s available yet. 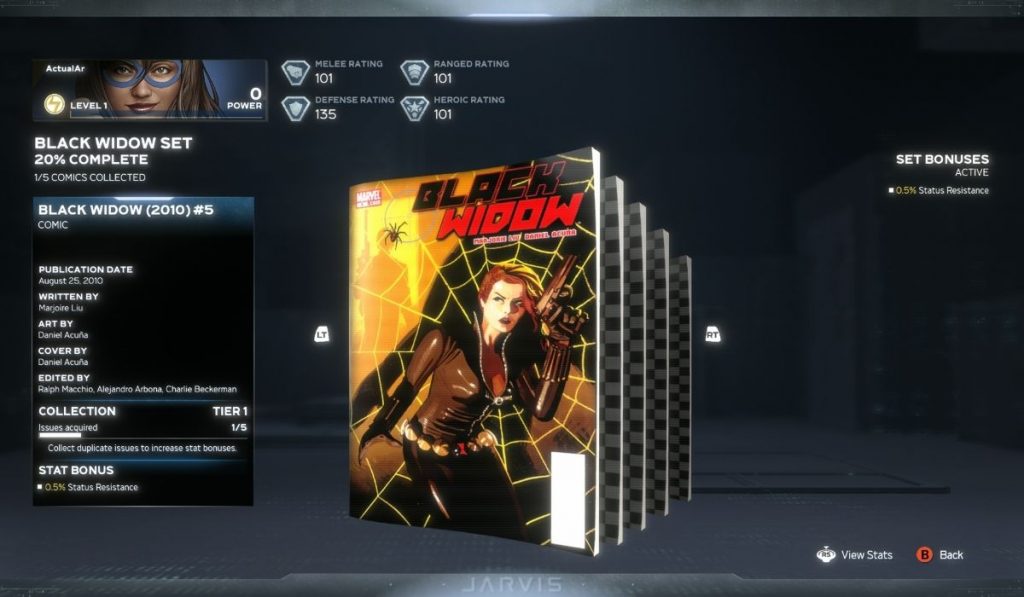 For me, gameplay on my Xbox One was smooth and fairly glitch-free. The end of the campaign seemed to wind up a lot quicker than I was expecting given that there was so much well-crafted narrative at the beginning of the campaign, but I feel that it was about the right amount of storytelling without it becoming repetitive. The combat system is enjoyable and you can assign a difficulty setting on a per-mission basis, which I also thought was very well considered.

Speaking of combat, smashing things up as Hulk was way more fun than I was expecting! There’s really a playstyle for everyone with this game; flight fans will love Iron Man and Thor, melee lovers will be all over Black Widow and Captain America (he wasn’t for me in the game, but what a guy) and those of you who love destruction with a soft centre will really enjoy the bond between Bruce Banner and Kamala, both during and out of combat. A variety of combos and special abilities ensure a truly satisfying fighting experience while playing as each hero, although some are definitely better suited to certain quests than others. 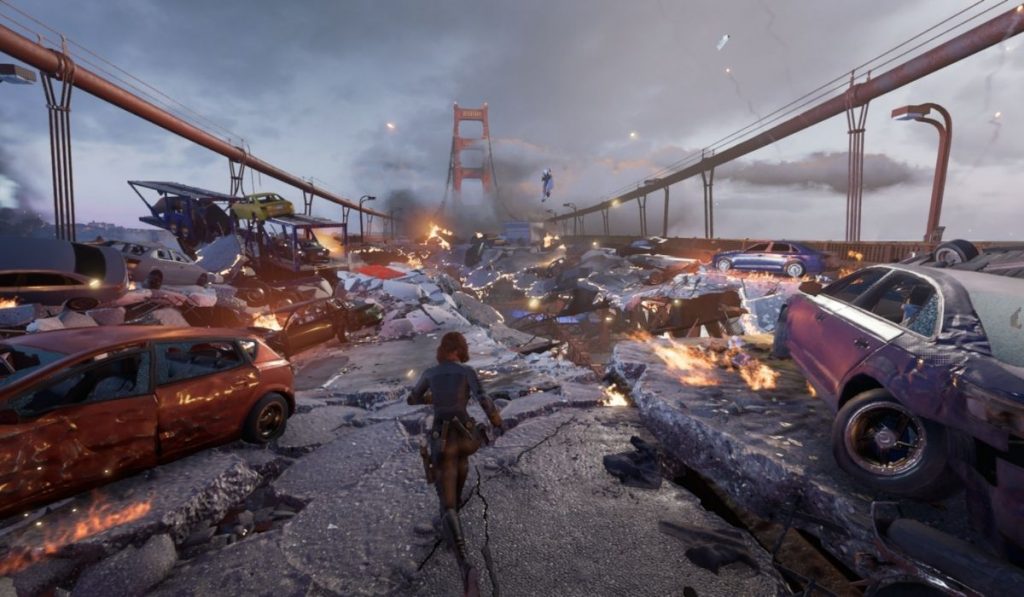 Avengers is pretty visually stunning. Levels are well-designed to accommodate the movement abilities and constraints of each playable character, and the level of detail in the art and animation is excellent. The UI is helpful without being claustrophobic, and there are a range of explorable areas and items in each scene for you to feel as though you’ve got some open-world flexibility. As mentioned I played Avengers on my Xbox One S and didn’t encounter any issues in terms of bugs or glitches.

The voice acting in Avengers is fantastic and the soundtrack definitely enhances the gameplay without being repetitive or annoying. The barks and in-action dialogue between characters during missions and combat genuinely made me laugh out loud at times. You can tell that the team designing the scripts really have a feel for these heroes and their personalities. All of this adds to the immersive experience you get when playing this game in campaign mode. 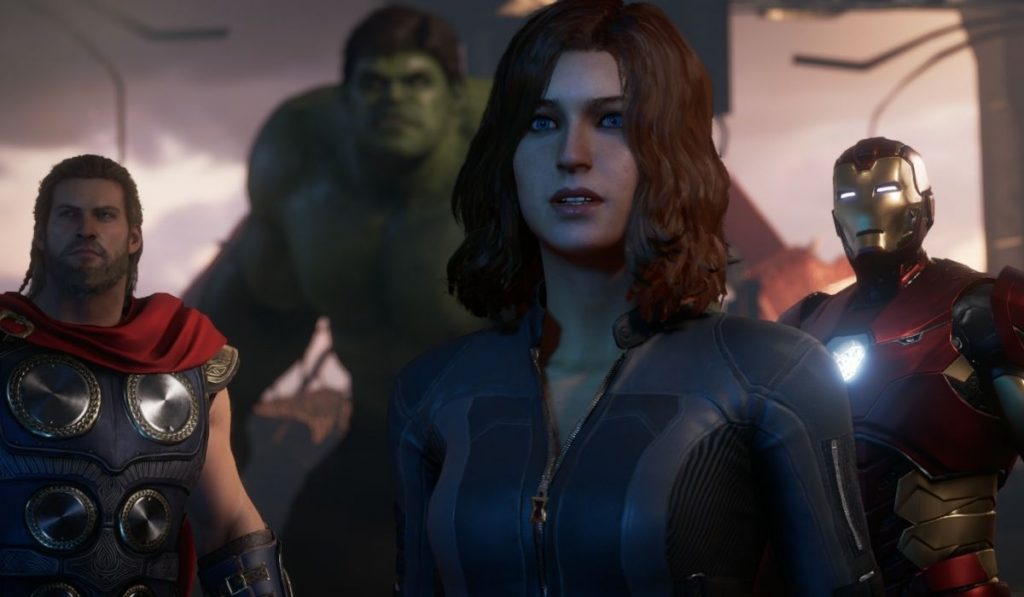 Reunited and it feels so good

Avengers is a game that I genuinely found myself wanting to play more of, and that’s quite rare for me. Perhaps it’s down to my lack of prior knowledge of these characters, but when I come away from a game wanting to research where the characters came from, I know that it’s one I’m going to continue playing for some time. It’s also been announced that there’ll be a free post-launch DLC where additional characters Kate Bishop and Hawkeye from the MCU will be introduced in a new quest chain that runs on from the main story. I’ll be researching them before I play that part though! All in all, it appears that there’s a lot more to come from this title, and I for one am excited to find out where it goes next.

I haven’t played enough of the multiplayer and endgame content yet to fully expand on that aspect of Avengers. Once I have done, there may be an update to this Marvel’s Avengers review. From a single-player perspective though, it’s a fantastic experience that left me wanting to deep-dive into the whole Avengers Universe as a result.

I really enjoyed Marvel’s Avengers. If you’re looking at the full gamut of the game’s online co-op options, then I can’t give you a fully formed critique on that yet. However, from a narrative perspective alone, this game stood out to me in ways I wasn’t really expecting it to. I came to Avengers expecting smashy-smashy superhero fare, and while I did get that in spades, I was also served up some insightful storytelling as a surprise.

In terms of the single-player experience, Kamala’s journey is exceptionally well composed and crafted. It’s also thoughtful and representative of modern-day culture. To my knowledge, Kamala is perhaps the first Pakistani-American character to feature as the main protagonist of a AAA-game. As part of the post-9/11 Muslim-American generation of young people, her character brings representation to the forefront of a major title, and it is a fundamentally important point to recognise. 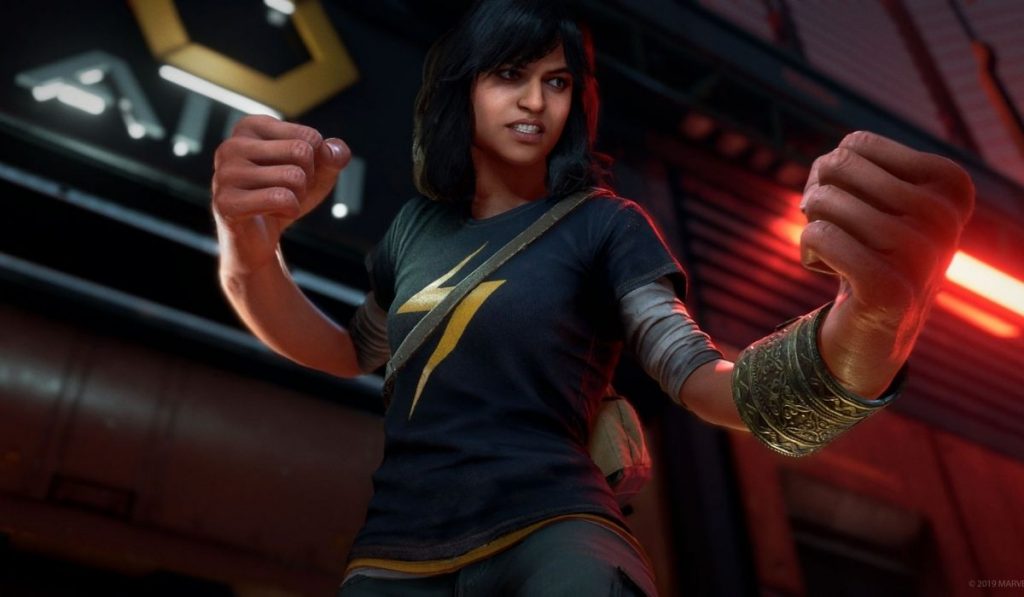 By positioning a character of colour and of the Muslim faith at the heart of a story about the unifying power of doing good (especially when the rest of the world views her as ‘inhuman’), Avengers takes careful consideration of some of the most topical issues facing underrepresented groups in our global society, and on such a gigantic platform. When Kamala explains how she constructed her first DIY superhero outfit to Tony Stark from a burkini, you get the sense that the character development in this game really was central to the story, rather than an afterthought to the mechanics and level design. For me, things like that are what separates a great game from a good game. Avengers takes those extra narrative steps to make the campaign experience both immersive and compelling, and regardless of any other gameplay niggles, that’s something that should be recognised and applauded.

As someone fairly new to the Marvel Universe, Avengers is a great way to be introduced to such a well-constructed and crafted heroic world. There’s just such a lot to get your teeth into that I genuinely think it’s a game that needs a bit more time to be fully appreciated. I can see this game improving greatly with each future patch and the addition of DLC means that there’ll be plenty to look forward to while you work on levelling up your hero of choice in the post-campaign content.

For some players, there’s bound to be gripes and issues around the prospective grind of doing so in multiplayer, as well as bugs and glitches on their respective platforms but for me, Avengers is an exciting, engaging and enjoyable game that combines a range of gameplay styles and thoughtful storytelling that speaks to both to its huge fanbase and beyond. 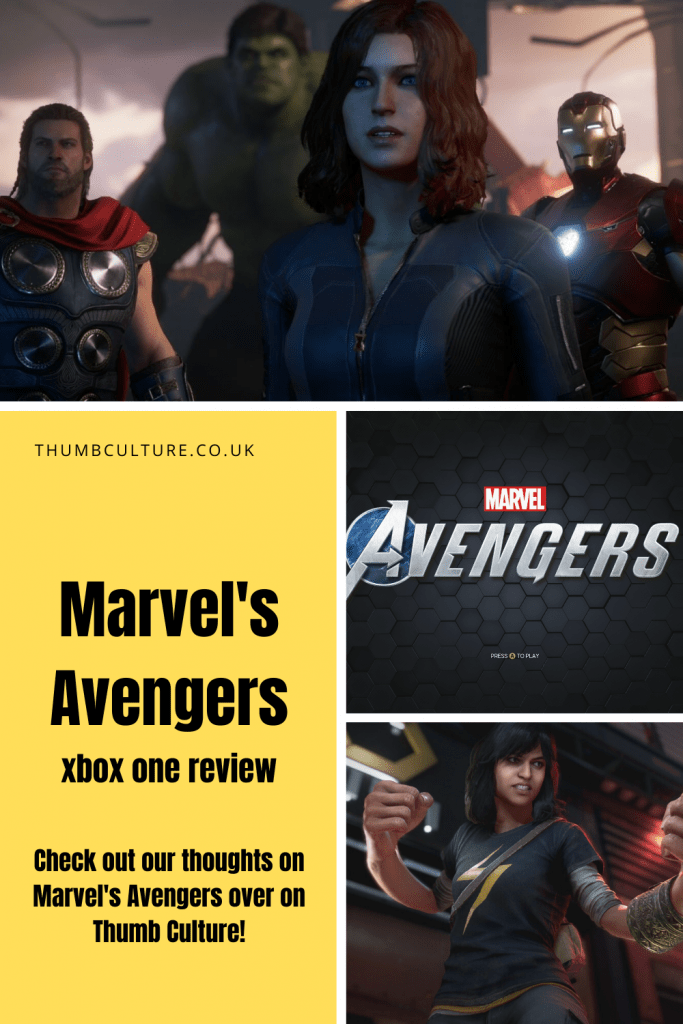 The Eternal Castle [REMASTERED] Switch Preview – Flashback to Another World

The Eternal Castle [REMASTERED] claims to be a remake of a lost 1987 title ...

Have you ever woken up to find yourself in a world where you’re ‘father’ ...