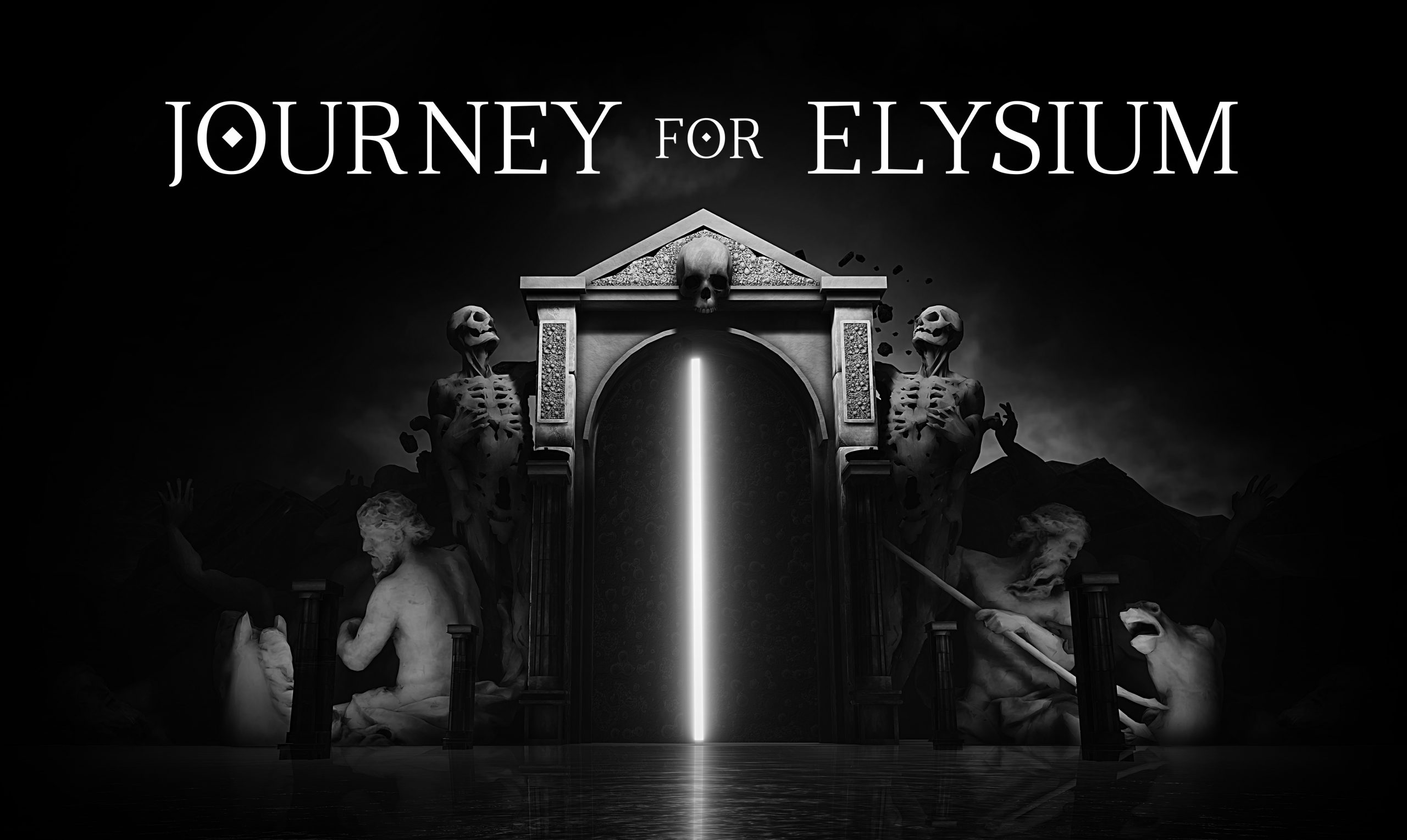 Journey for Elysium is the debut title from Mantis Games. It’s an immersive story-driven title guiding you through your initial steps into the afterlife. After an unsuccessful Kickstarter campaign, it would appear the game was rescued by publisher Chronos Interactive and released to the world in October 2019. The game involves walking through a monochromatic world, solving puzzles and interacting with the environment to solve the mystery of your death as you travel to Elysium.

If you have played any 2-4 hour VR experience that encourages walking around and interacting with the environment, then at this stage you’ve seen them all. What you need for your game to stand-out is a hook; something to really grab your attention.

Vader Immortal gave you a Lightsaber, Batman Arkham: VR allowed you to suit up as the Bat himself but Journey For Elysium lacks any such gimmick to really grab your attention. It does have a mixture of tropes that many other games have seen, and they’re executed well but it definitely feels like a lot of “been there, done that”.

What Journey For Elysium does do well though is draw you in; the landscapes and level design is quite grand and you do find yourself admiring everything around you from rowing through the river Styx to climbing up ruins searching for a missing component from a larger mechanism. The visuals with their muted colours really help draw you into the detail without hiding everything with bright colours and flashing lights.

There are also a wide variety of things to do; you’ll be rowing your boat, climbing up walls, using a bow and arrow to activate certain events and gathering up pieces of puzzles to reveal the next path. You even get a harp a little later on but this becomes the VR equivalent of a Quick-Time Event, only very slow…

As the game progresses you are presented with more opportunities to flex your brain, but unfortunately it does mostly boil down to “walk around until you see the orange thing, pick up the orange thing, take it to the other orange thing”; some variance is present in the form of shooting fire arrows to burn a switch or how some puzzles are used in differing ways later on to keep you on your toes. Actually some of the best puzzles revolve around climbing or traversing spike traps using the clues around you to find the safe path.

The spectacle as you solve a puzzle is quite often very rewarding thanks to those grand level designs – from you transitioning to a new area by draining a grand reservoir of water to reveal some intriguing lore or having a statue of Prometheus himself burn away some troublesome vines; these are the events that keep you focused on your surroundings and in awe of the design that has gone into the game.

The game quickly takes you from a colourful Cliffside to a monochromatic dreamland, the only exceptions of which are to draw the eye. This is a double-edged sword; whilst the game is incredibly atmospheric and the detail can draw you in, all of your actual objectives stand out from across the play space; yanking the game away from being an interesting puzzler into more of a walking simulator.

That being said the scale and scope of these areas is incredible when you’re first presented with the river Styx or the grander, more vertical spaces you are taken aback as you inspect all of the details. It’s amazing the depth of the design at play here and also the thought behind it; these aren’t simply artefacts chucked around to fill the space, everything feels like it has a purpose and an intentional presence.

Whilst there is an orchestral backing track that ramps up during the grander reveals most of the audio is focused on the ambience and that really works in the game’s favour. This isn’t the type of game where you want to be distracted by music or unexplained noises; it’s a game that’s the whole purpose is to grab your attention for 3-4 hours and keep you immersed.

There is barely anything worth revisiting in the game – clocking in at around 3-4 hours it makes for an interesting playthrough with some fairly standard VR interactions but nothing that draws you back outside of re-exploring the world which does have some incredible depth and detail in places.

I think Journey for Elysium is the kind of game you would show off to people to say “here is what VR can be” – it’s different to the neon lights of Beat Saber or the colourful platforming of Astro Bot, and that’s a great thing and with its mechanics verging on the simpler side, it’s a great first entry into the VR space for anyone new to these headsets.

Thanks to a handy chapter select you might find yourself wanting to revisit particular moments just to engross yourself back into the scenery or the spectacle.

I know at first glance this review may come across as relatively negative, but Journey for Elysium executes everything it does very well.

Journey For Elysium is a Jack-of-all-trades VR walking simulator, but where it really excels is the fact it takes all of these machines we have seen time and time again and polished them to make an incredibly immersive experience. Mixed with the beautiful set pieces and stunning backdrops it’s hard to pass by the game without wanting to dip your oar in, but don’t go in expecting it to be your most played game – it’s a very well-executed standalone experience that will get you thinking and then you’ll move on to fewer monochrome pastures.