I’m Hungry VR is the latest release from Winking Corp and was served upon Playstation VR on 8th July 2019. It vaguely resembles a first-person, VR version of Overcooked, with your task being to step into the grease-spattered shoes of an over-worked burger stand jockey and makeup food orders for a never-ending queue of wacky characters.

I’m Hungry VR follows a level-based format. Upon loading up the first level you’ll find the tools used to prepare the various calorific nightmares on the menu line the cramped confines of your kiosk, with an ice cream machine, trays containing burger components, a soda dispenser and a chip fryer all within arm’s reach.

Preparing each item involves a couple of steps, requiring you to hit buttons, pull levers and wait for timers to expire. There is no variation in terms of how each item is prepared, to begin with, other than that the burger can be dressed with either chilli or cheese sauce, which confusingly is dispensed from squeezy ketchup/mustard bottles respectively.

I’m Hungry VR offers a lot of fun at its core, especially for those who enjoy fast-paced simulation games. Fulfilling orders in a frantic experience and getting a perfect rating at the end of a level is quite satisfying.

You are working against a very strict time limit so any dithering will lead to you failing your objectives and predictably enough making up an order too slowly will make for unhappy customers, as will presenting them with the wrong food. It soon becomes apparent that success in the early stages involves making sure you always have one of each food item in reserve, and therefore it’s beneficial to simply replace anything you have used immediately.

Food you have prepared but not handed out doesn’t expire, although if you have prepped a chilli burger when the next customer wants a cheeseburger you will need to throw it away, leading to a time penalty. 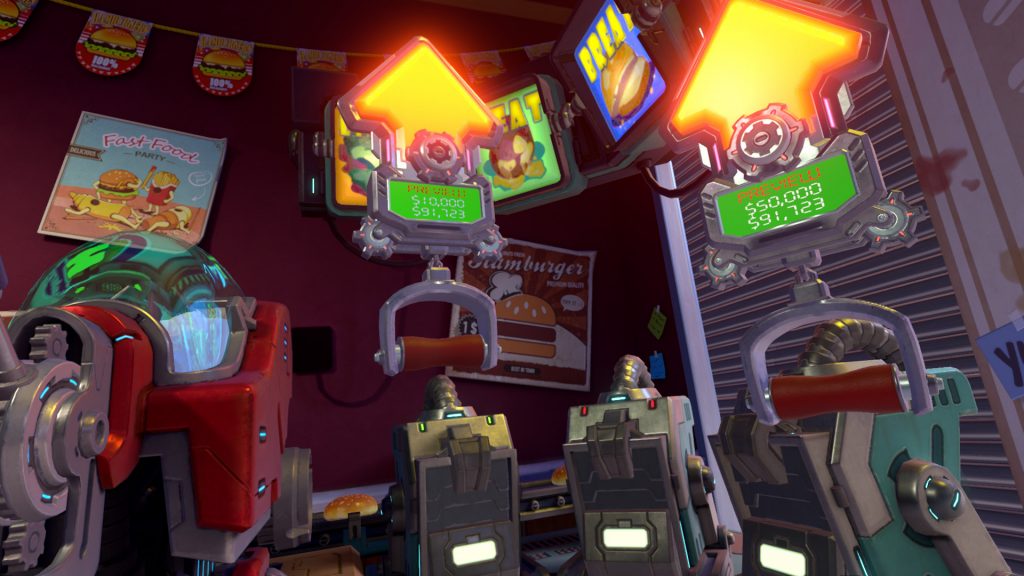 The game mostly steers clear of offering any verbal instruction, with guidance being delivered via diagrams and primarily wordless cut-scenes. This isn’t such an issue in early levels but before long the difficulty starts to become excessive, with rewards for successful completion of levels feeling meagre.

After a number of failed attempts, I started to feel like I was missing something and I wanted more guidance as to how I could improve. Around this point, the game started asking me to make golden items, which are souped-up versions of regular menu items. Making an item golden involves holding a piece of food while shaking the PSVR move controller in a certain direction or, in the case of the burgers, making a slapping motion while facing the counter. I found this only worked occasionally, and the instructions as to how to gold-plate each item are presented on virtual pieces of paper which need to be lifted up to your face to read, which only adds to the frustration when things aren’t working as you expect.

To mitigate the difficulty the machines you use to prepare food can be upgraded to enable you to serve customers faster but each initial upgrade is priced at $10000, and early levels only give you the opportunity to pull in a few hundred dollars on each play-through.

Unfortunately the upgrades feel entirely necessary on later levels, and this means the grind is beyond the pale, being similar to that of a mobile game with micro-transactions. There may be quicker ways to earn money but the game doesn’t make it clear what they are, and I felt disinclined to play the same levels over and over given that each level is in itself typically a carbon copy of the one before with more stringent goals.

The customers and their orders are randomised in I’m Hungry VR, and sometimes the same customer will approach the counter twice in a row, which can be confusing if you swivel round to make some chips only to turn back and see a clone of a character you just served standing at the counter.

Another issue is that whether you succeed or fail can be down to the customers and orders you are presented with. You can prepare each of the four items in anticipation of a customer’s order, but being asked to make two cartons of chips or sodas over the course of one order is especially time-consuming due to the machines being slow to operate. 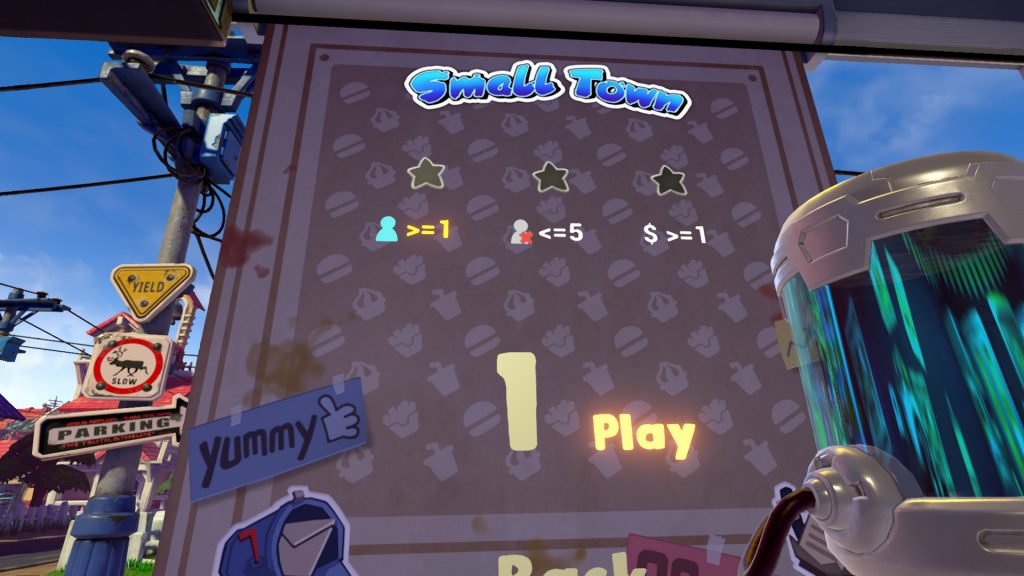 Additionally, customers are in no hurry to approach the kiosk and place their order, and once you have handed over their food they perform an animated routine before slowly retrieving their money from their pockets/purses/hair. The time it takes to serve each customer can be especially frustrating if they have only ordered one item, and you’ll see your chances of a pass going up in smoke when they twirl and burble for what seems like an eternity only to hand you the in-game equivalent of a 20 pence piece.

Sometimes you will reach the last 30 seconds of a level and become aware that there’s no way you’ll prepare the current order in time to collect the monetary reward, at which point it feels like you may as well put down the Move controllers and put the kettle on. On top of this, there is no way to quickly restart a level and failing boots you back to the level select screen rather than giving you the option to have another try. 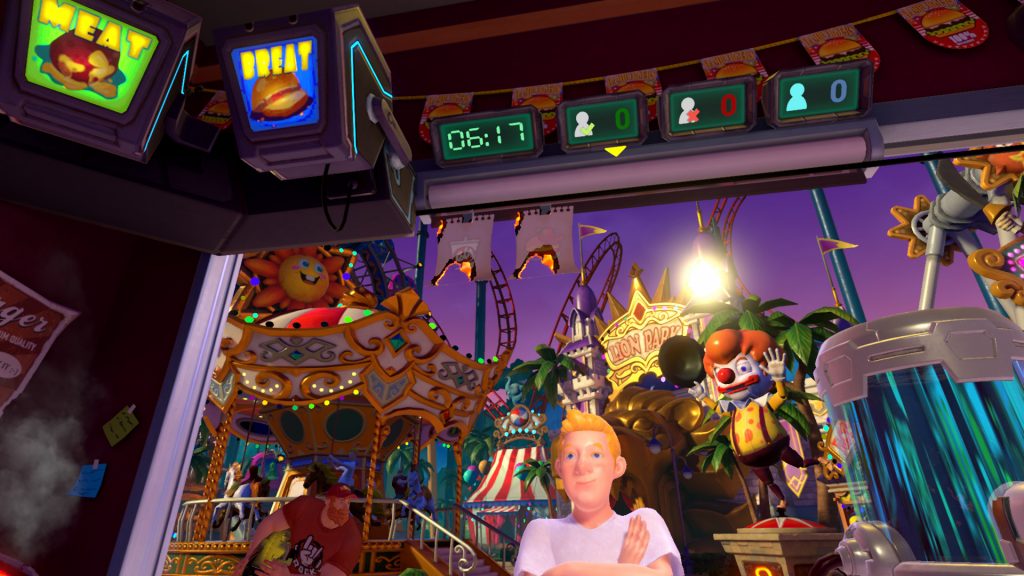 Variety is lacking in terms of the core gameplay, with customers in the second area being mostly the same as those in the first, with the same machines and food items also carrying over. As mentioned previously, machine upgrades offer the ability to improve your scores by allowing you to craft new menu items or simply prepare two items at once, but the experience of fulfilling orders remains largely identical to that of earlier stages.

Later levels introduce new mechanics such as items being added to an order after a delay or the pictorial depiction of the order disappearing altogether after a few seconds, meaning serving up the correct food involves memorisation as well as machine management, but for some this concession to variation might be a case of too little, too late.

I’m Hungry is visually pleasing although, as with all PSVR titles, there is a lot of aliasing and blur owing to the low-resolution screen. As mentioned previously, there isn’t a lot of variation in terms of characters but they are all well-animated, with the kinds of exaggerated expressions and movements you might see in a Pixar film.

The burger stand in which you work is also colourful and well-modelled, with the back office extending behind you should you ever wish to risk permanent neck or headset damage by twisting around 180 degrees. All these neat visual touches help with the sense of immersion, although with only settings available more variety in terms of environment would be great, especially given some of the wacky settings in games like Overcooked.

I’m Hungry VR’s music is jolly and fits the mood of the game well, again evoking Pixar and Disney films. Characters speak in over-excited gibberish, which, while occasionally endearing, can start to wear thin once you’ve served the same person 15 times.

I’m Hungry VR is priced at £13.99, and for me, that feels like about £9 too much. I wonder whether anyone will want to move onto the endless Challenge mode once the 36 levels of the main campaign are complete, given that once again it involves serving the same four items over and over with minor variations.

However, this is a VR title and for some people being immersed in such a charming world for a few hours will be well worth the price of admission. 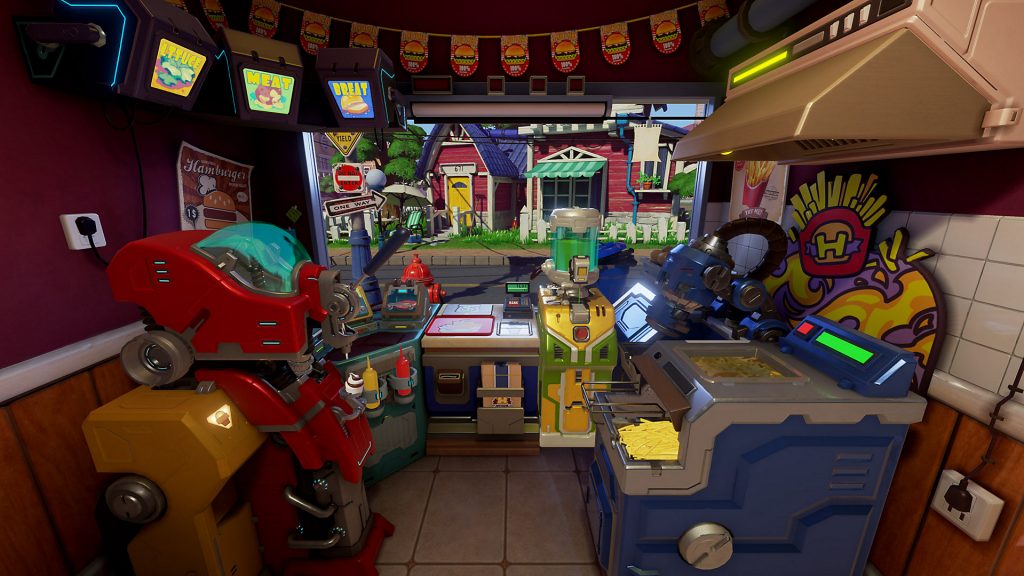 I’m Hungry VR will likely please those who want to see what it might be like to work in a burger stand without having to endure abuse from lairy blokes and unpleasant managers, and there is fun to be had if you don’t mind a lot of repetition.

However, if you’re a stalwart of the frantic food prep genre (if there is such a thing) and are no longer as entranced by the charms of VR as you once were you might find this one a bit under-cooked.

I’m giving I’m Hungry VR the Thumb Culture Bronze Award, which is the fast-food equivalent of a McDonald’s hamburger. Nice!