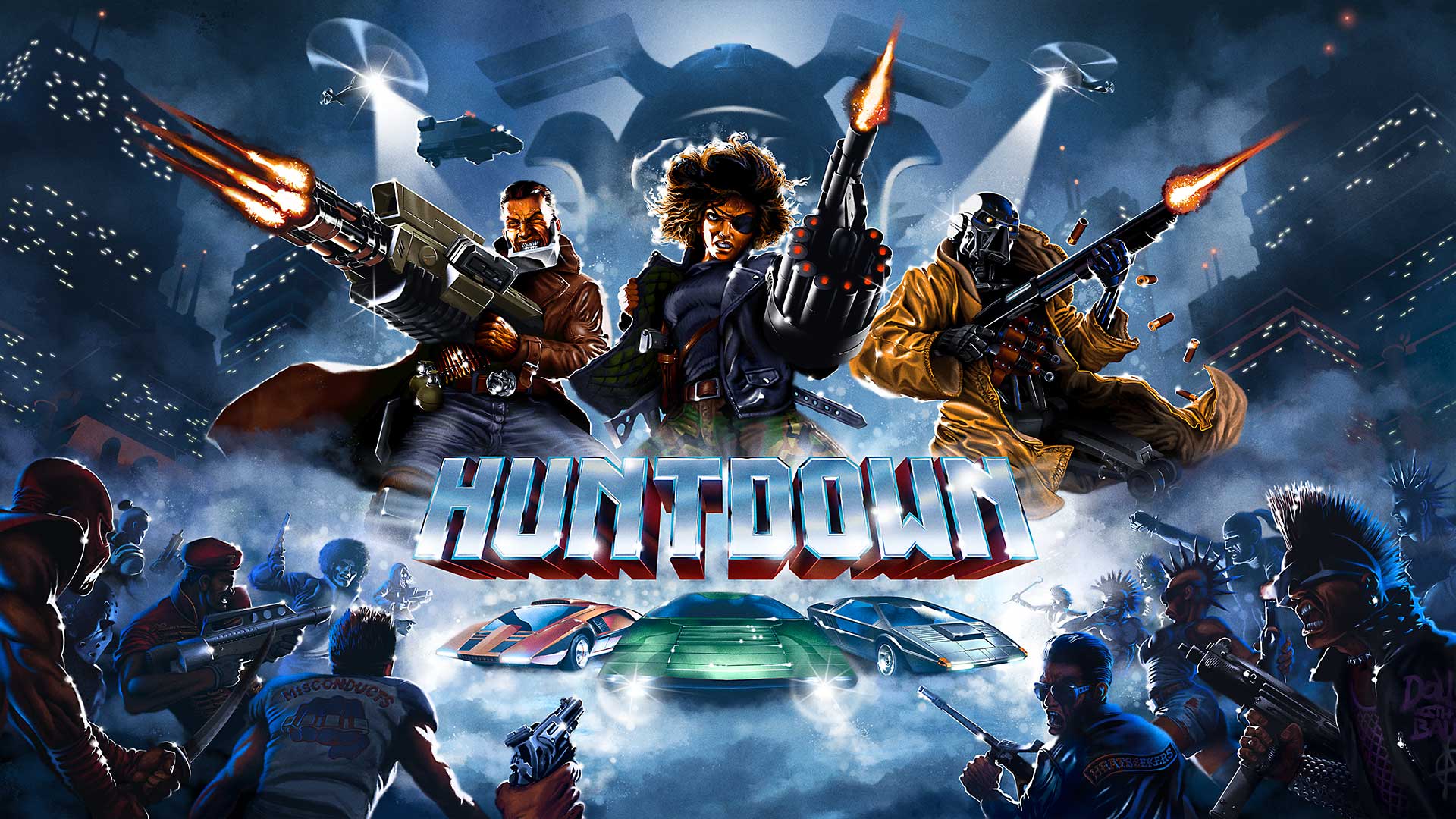 In a week where we’ve found out Robocop and The Terminator are at war with each other once again (thanks to Mortal Kombat 11), and Arnold Schwarzenegger has returned to the world of Predator, you’d assume that things can’t get more 80’s if you tried. But thanks to Huntdown, you’d be wrong.

Not just simply dipping their toes into the nostalgia pool, developer Easy Trigger has dove in headfirst, bottled every last drop, and have grown the most glorious Garden of Action Film Eden. Published by Coffee Stain, Huntdown is available now on Nintendo Switch, PS4, Xbox One, and PC.

In the mayhem-filled streets of the future where criminal gangs rule and cops fear to tread, only the bounty hunters can free the city from the corrupt fist of felony. Lay waste to the criminal underworld and make a killing in this hard-boiled action-comedy arcade shooter.

Huntdown is a glorious celebration of all things retro. From it’s setting, right through to its superb gameplay.

At its core, Huntdown is a wonderfully designed 2d shooter, with simple and instantly gratifying gameplay. You select one of three bounty hunters, and work your through 20 levels of guns, blood, explosions and one-liners. One thing worth noting is how refreshingly straight forward the game is. It doesn’t try to bog itself down with other genre influences, persistent worlds, or overly convoluted systems.

Shooting feels tight and responsive, and thanks to great weapon design, it’s immensely satisfying. Each bounty hunter has their own unique primary weapon, but secondary weapons, ranging from the ol’ reliable sawn-off shotgun to electric katana’s and rocket launchers, are scattered throughout the game. Easy Trigger have also included a nice cover mechanic to proceedings. Along with the classic ‘duck behind a box’, you can dive into background objects to take cover. Nothing here is just for show either. Enemy and level design will force you to adapt of the fly.

Speaking of level design,they may be linear, but they’re honed to a T. They keep the action flowing, and offer plenty of surprises and intense moments, and at the end, each boss encounter is suitably epic, offering its own surprise and challenge. Whilst some might be better than others, they’re often a real highlight, and are always engaging and enjoyable.

It would be easy to look at Huntdown and assume it’s just another pixel homage to a classic era, but that would be underselling the game massively. The work Easy Trigger have put in is nothing short of exceptional.

The world of Huntdown is wonderfully realised, and is a pleasure to spend time in. It will pull on every heartstring as you dive into the future the 80’s pictured. Dystopian cityscapes, ruined subways overrun by gangs of Ice Hockey players, lasers, ninjas, and cyborgs (Oh My!). It’s all here.

Each level impresses with highly detailed backgrounds, beautiful animations, and gorgeous lighting. Between the levels, cutscenes are expertly crafted and pop from your screen. They bring the flavour of a BitMap Brothers classic but make great use of the additional power modern machines can offer to take it to a level we’ve rarely seen.

To put it simply, Huntdown is a treat to behold.

Even looking at stills of Huntdown, I’m sure you can already hear it in your head, and yep, it’s everything you’d want or can imagine. With this much 80’s action film love flowing, how can it be anything other than a Synthwave deep dive!?

Each level has the exact sounds to get the blood flowing, the adrenaline pumping, and the nostalgia spine-tingling.  If the gameplay doesn’t keep you hooked until the end, then just do it for the outro track. (And don’t go YouTubing – you need to experience it after a long arduous fight).

For as pitch-perfect as the soundtrack is, it can feel a little samey throughout. It doesn’t quite vary as well as the settings do, but as the action moves at a rapid pace, I never found it repetitive or stopped being enjoyable.

Outside of the soundtrack, weapons and enemies all pack a punch, adding to the atmosphere of the game. But what really sells things here is the voice acting. One-liners are delivered with all the gusto they deserve, even when the lines aren’t the greatest.

Whilst Huntdown might not keep your attention for more than a few hours, it doesn’t need to. Like it’s gameplay, it keeps things straight forward and doesn’t get tied up with multiple routes, endings, or filler material.

There is replay value as each bounty hunter does have a slightly different playstyle, and the co-op mode is a blast. There’s also a range of difficulties, and 3 objectives per level. For those watching to hit 100%, you’ll have to but some time into it. But, mainly, thanks to its rock-solid gameplay, Huntdown is a game that you’ll want to jump back into every now and again, and will be a staple in your gaming library.

Huntdown is fantastic game which is a joy to play. It’s a short but finely crafted experience, which you’ll be telling all your friends about. And when you find yourself with an evening spare, don’t be surprised when you keep going back to put a smile on your face. It’s a pleasure to award Huntdown a Thumb Culture gold award.