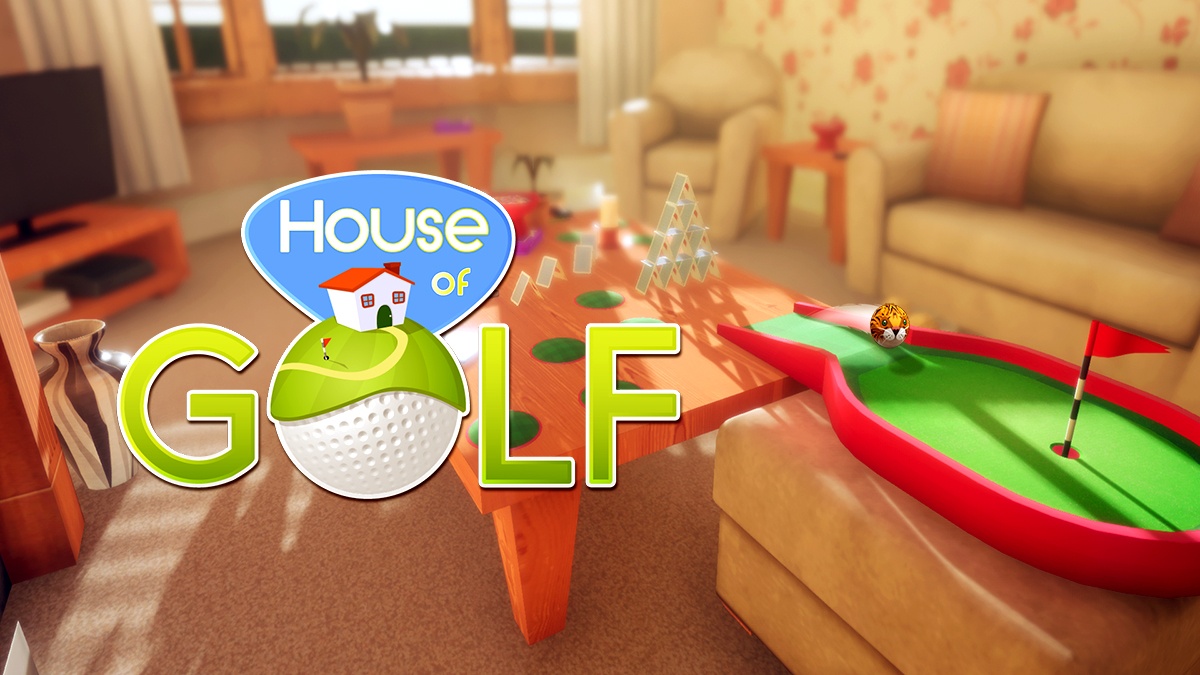 Teeing off on November 8th is the Switch exclusive House of Golf. The arcade golf game developed by UK company Atomicom hits the eShop today but have they hit a hole in one or just got a bogey?

Crazy golf is fun right? Although you know what to expect, a series of small courses that has an overarching theme, the core gameplay of this sub-genre has always appealed to me but  what makes this game stand out? Well, one key aspect of the game that really blew the sand from my balls (due to the golf ball landing in a bunker… don’t be filthy) is the design. Taking inspiration from games like Micro Machines, each environment is loving crafted to feel like the inside of a home. This nostalgia trip made me want to play in this world for longer than other mini golf games that lack innovation with its conventional design.

Focusing on the gameplay, all you need to do is get from point A to B in the least amount of shots possible. Sounds simple right? Now we all know that’s not necessarily the case. When playing the game my inner Tiger Woods came out (luckily no infidelity occurred) and I took the role of the golfing expert. Although the game isn’t the toughest out there, it is quite difficult to get the gold star rating on the hard difficulty.

An issue with the game is the physics, a few too many times I planned my shot to ricochet off one item, bounce off another which would then lead to the ball being in a prime position to get a birdie. However, upon executing the audacious shot, I noticed that the ball didn’t always interact with the environment how I wanted and expected it to, leading to some irritating moments (usually due to the kids laughing at my performance, which is a change from the wife – don’t be filthy!). Nevertheless, this is definitely a game that the whole family can enjoy and certainly scratches that golfing itch on the Switch.

Visually the game is really nice. It’s cute and bright colour palette looks nice on the Switch, particularly in handheld mode. The environments are a highlight of the game’s graphics. You will notice that the levels have pencils, rulers, books etc. used to create the course, however, it’s the little details that anchor the game into my childhood and gave me a sense of nostalgia whilst playing the game.

The music is a bit of a let down in the game. The breezy, airy soundtrack doesn’t really match the environments but that’s a minor gripe. The sound effects are suitable and the sounds successfully replicate what is happening on screen. I have never cracked a golf ball at a glue stick but I assume it sounds something like what I heard in the game.

House of Golf has 135 levels to keep you busy. On top of this, the added star rating for each course will keep you coming back. It’s a game that really does have that ‘one more go’ factor. It’s fun to play with yourself but it’s better to play with others (don’t be filthy) and House of Golf features 6 person local multiplayer! This can be experience on single hole mode (don’t) or championship. Lastly, you can pimp your ball. There are loads of balls to unlock which again will keep you coming back to complete a course or to up your star rating in order to have the best balls on the course.

Releasing at £8.99, I feel that the game is good value for money. It suits the portability aspect of the console due to the game being focused around short bursts and the inclusion of pass and play local multiplayer will also make this appealing to families and friends. Finally, it skews a few shots but generally it’s a solid and fun game that casual golf fans will enjoy and due to this I award House of Golf the Thumb Culture Silver Award!