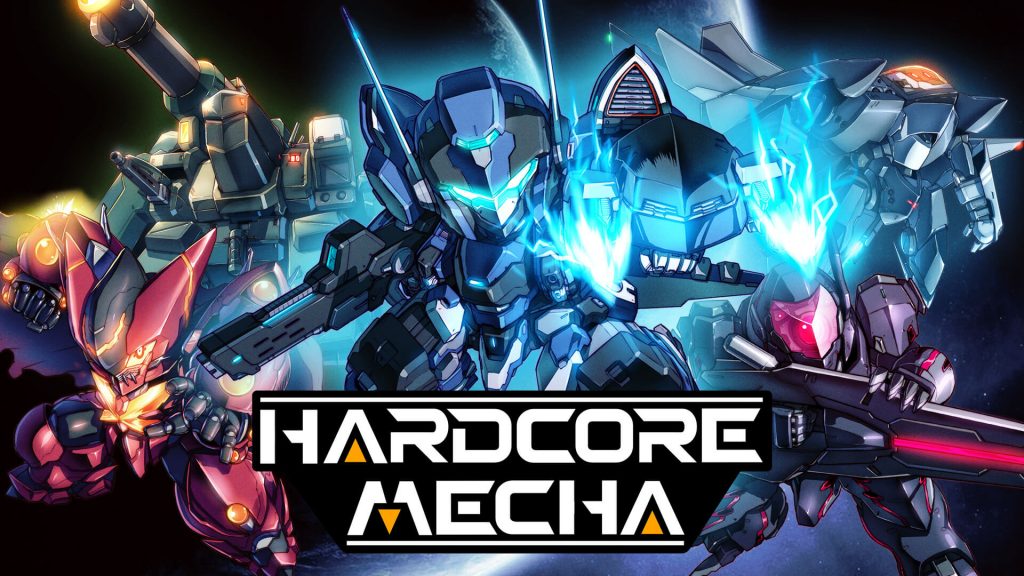 So today I bring you Hardcore Mecha made by RocketPunch Games. More importantly, I have managed to get my hands on the PlayStation 4 version before general launch.

The first thing that hit me when I started Hardcore Mecha was the OST. I sat at the main menu listening to the opening soundtrack because it’s that damn good. Hardcore Mecha starts you off with a tutorial for your first level. It’s more like dangling a treat in front of you. Your tutorial level is in an all singing and all dancing mecha. This thing does everything and is a glimpse of things to come.

Hardcore Mecha is at its heart a 2D side-scrolling shooter. Although in my opinion, it runs far deeper than just that. You can collect and research new weapons, defensive parts etc. you get to customise your mecha to suit your playstyle. That’s not something you would normally say about this genre of game. It does run quite deep and tactical.

The game itself runs smooth, it takes you back to a golden age of side-scrolling games. You always feel in complete control playing Hardcore Mecha. The controls are excellently done and feel comfortable. The story itself is pretty good but I still felt disengaged from it. This isn’t to say its bad. I just found it didn’t capture me like I would have wanted. I just can’t put my finger on it.

The gameplay and the boss battles are where my passion lies for Hardcore Mecha. That’s where I fell in love with the game. The levels are fun whether you are battling troops or tanks or other mechas. RocketPunch Games through you a curveball here too. There are some levels that require you to get out your mecha and fight on foot like the great metal slug series. It gets better and more involving because during these levels you get to use stealth and sneak your way through levels if you so wish. There is something for everyone hidden inside Hardcore Mecha’s gameplay.

Hardcore Mecha stunned me with this. Normally I’m not a fan of indie games plain and simply due to the artwork and graphics. they remind me of early gaming days where a programmer wrote everything in his bedroom rather than a professional environment. Graphically this is a stunning game. It looks and it feels like a AAA game. The graphics are a hand-drawn style that follows in the footsteps of the great Borderlands series. My hat goes off to RocketPunch Games for the effort that’s gone into this game in this area.

Hell yeah!!!! This is an area that can make or break some games but, Hardcore Mecha knocks it out of the park with its audio. The gunfire, mech movement it all sounds perfect. Then we get to the music of the game. I can’t big it up enough. I loved every sweet note of this game from the opening sequence to the final curtain. It puts some other anime games to shame with their attempts.

Hardcore Mecha is a good game and for me, it has replay value with various mecha builds. I’m not sure if everyone will feel this way but I would like to think so. I would also like to see the game expanded perhaps with DLC at some point. I don’t mean those silly cosmetic DLC items either but maybe extra missions or areas etc.

Hardcore Mecha has balanced itself just right. It is graphically impressive, It’s audio is excellent, and it gives you that golden oldie feeling with a modern control scheme. Harcore Mecha gets a Thumb Culture Gold Award. It’s a great game and you should give it serious consideration for your games library.

Disclaimer: We received a code to review this game.