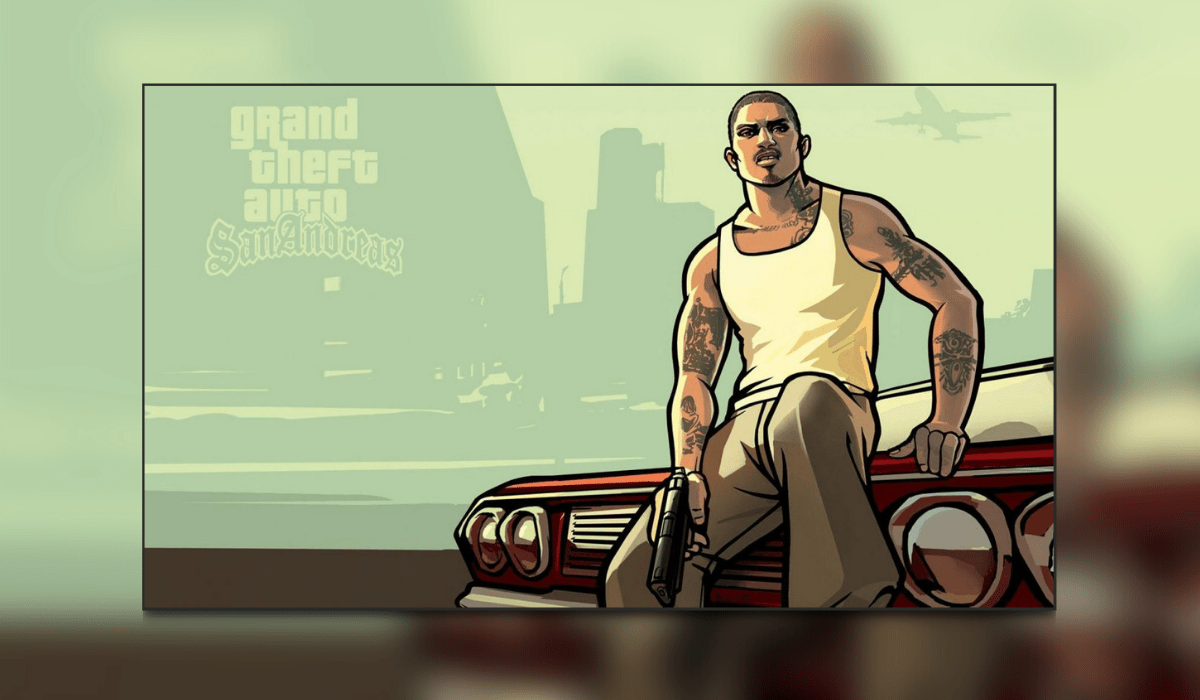 If you grew up in the late 90’s and early 2000’s, you know all about this game. You either played this game religiously and knew every mission and piece of dialogue. Or you’re one of the kids who’s parents refused to let them play it. Or maybe you snuck off to a friends house to play it anyway.

“After five years on the East Coast, it was time to go home”

Whatever experience you have with this game, there is no denying that Grand Theft Auto: San Andreas has made it’s mark in pop culture. One of the first major video game controversies, the hot coffee mod, sprung from a fan made code in the games PC version which featured a sex simulator. It was so controversial that the game made it’s way to Washington D.C. where politicians talked about the impact games have on young people.

And of course there is Big Smoke’s infamous in-game order which featured three number nine’s, two number forty-fives, a number six, seven, and a large soda. And lets not forget the infamous line, “All we had to do was follow the damn train CJ!”.

When first released, Grand Theft Auto: San Andreas received critical praise. Some calling it the best entry in the series. But now with releases like Grand Theft Auto V, I want to see if it still holds up. Is there still a spark of fun and creativity, or is it draped with early 2000’s nostalgia. Are we still looking through our nostalgia goggles? I went into this with an open mind and what I found is what I’m here to talk about. If you love this game or want to share your opinion, let us know in the comments, we’d love to hear. 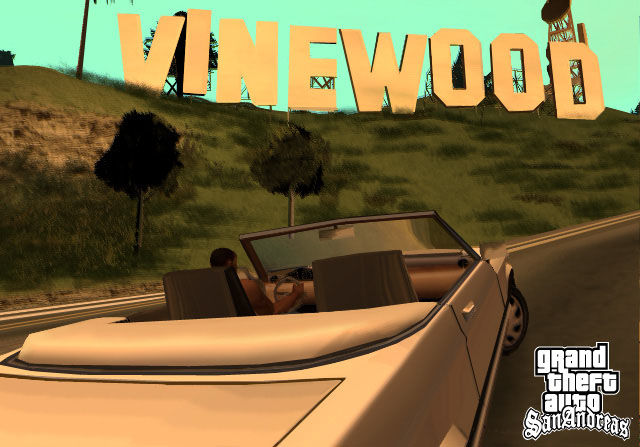 Following the death of his mother, Carl “CJ” Johnson returns to his home town of Los Santos where he was once an important member in an infamous street gang. He reunites with his old friends and finds out that the once powerful gang has lost their territory and credit which has been given to their rivals. CJ decides not to leave Los Santos until they regain their territory and take down the rival gang.

From what I’ve said, the plot is pretty simple to understand. I feel like with other Rockstar games, it can get too complicated. With the way characters are set up, you start to root for CJ and his friends. And speaking of characters, the voice acting is fantastic. Every performer really gave it their all. The dialogue is very realistic and I wouldn’t be surprised if most of the lines were ad-libbed. 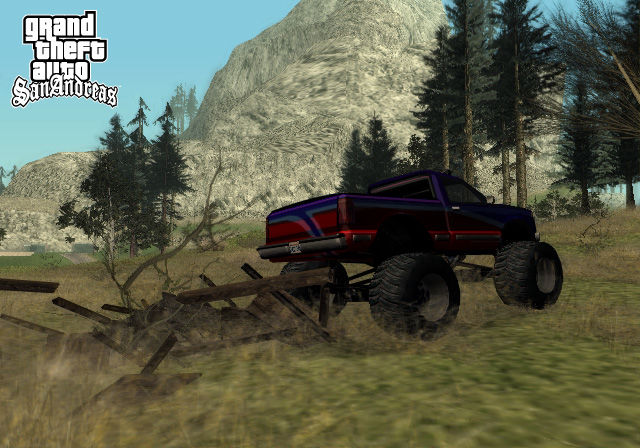 One idea Rockstar added that I am a huge fan of is the rpg mechanic. Once you start playing, you have the option to improve CJ. If you take him to the gym and have him work out more, you can raise his stamina and strength. He’ll be able to run a lot faster after this. If you make him go into a Cluckin’ Bell or Burger Shot to eat, that will raise his energy level. But if you feed him too much food, he can get really out of shape so I don’t recommend doing that.

Most people might find this rpg style annoying but I find it to be a great feature. With this, you can make CJ more stronger and faster so you won’t take as many hits. And it’ll be a little easier to beat a mission.

With the plot and rpg mechanic being great, one thing Grand Theft Auto: San Andreas lacks is in the controls. The mechanics feel scattered all over the controller. For example, you use the R2 button to cycle through weapons and you would think you use L1 to fire. Wrong, you use L1 to lock on a target and use the X button to fire.

It sounds simple but it can be quite confusing for your first time. If it is your first time, you’ll be pressing every button until you get the right one. And the game does a horrible job targeting on enemies. It just does it whenever it feels like it and it’s always on the wrong person.

And yeah, lets talk about the elephant in the room with the train and rc plane missions. But there really isn’t anything new to say about them. Yeah, it sucks. Yeah, they’re poorly coded. And yeah, it takes a lot of tries to beat them. But you got to have patience. There’s nothing better than beating them. I’ve heard the re-releases on PS3 and Xbox 360 improved both missions but I’m playing the PS2 version so I don’t know if that’s true or not. 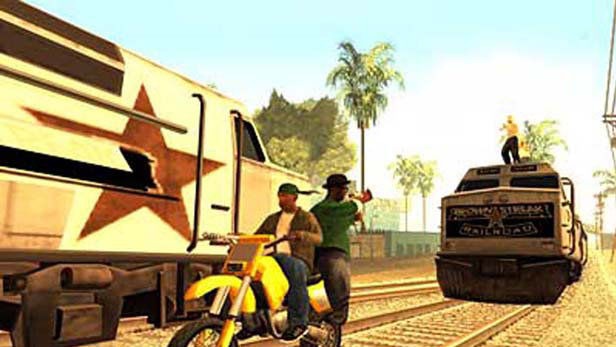 Since Rockstar has gotten better and has received more funding for the games they make, I feel like we’ve been spoiled with releases like Grand Theft Auto V and Red Dead Redemption 2. Each game they release gets more and more detailed and they deserve all of the praise they get for it, but with this game, the graphics don’t hold up. Just like with Ocarina of Time, it looks really choppy. This is an old game so I don’t expect the graphics to still be as good as they were back in 2004. But looking at it now, I find it to be the main problem Grand Theft Auto: San Andreas fails in.

During my play-through, I noticed that a lot of npc’s were sometimes floating inches above the ground. I also noticed that the train wasn’t connecting to the track at certain points. I would complain that there isn’t really great draw distance but since this is PS2 era, I’ll give it some slack. Besides the stuff I mentioned, there weren’t any game breaking bugs or minor glitches I found. There weren’t any fun glitches I found either. No catapult swing set yet, sorry.

But I must say that for the year this came out, there is a lot of realism to it. I think that’s something Rockstar has gotten better at and this is when they started getting good at it. The way characters run isn’t fantastic but it looks more human. It’s not the most realistic but they’re getting somewhere. It’s not like Vice City where the running felt stiff and robotic. And the way characters interact with object looks a lot better. All of what I’m saying is nothing to rave about but this is the point where Rockstar was getting better at making more realistic environments and characters

The audio has improved much more than the previous Grand Theft Auto entries. The voice acting feels more clean to listen to. And once again, the music is great. All of the music fits with the in-game world. You got stations for rap, hip hop, rock, R&B, classic funk, disco and grunge. I’m not really a fan of any of these genres but whenever I found a song that I liked on the stations, it got me pumped. But most people will agree that Vice City had the better soundtrack. 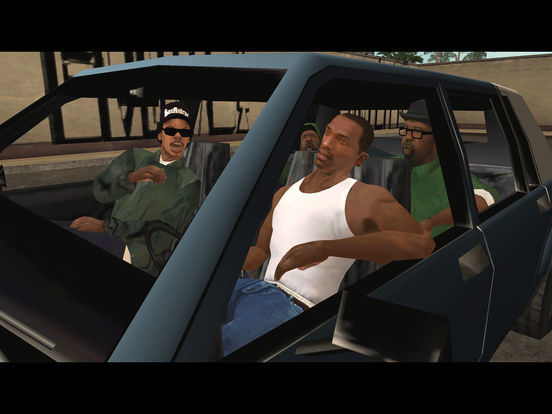 If you play every mission without doing any extra stuff, it could take about 11-12 hours. But with all the stuff you can do, it can take you even longer. While you’re playing, try on the jet pack and fly around Los Santos. And stop by the cemetery to check out Spike’s crypt from Buffy the Vampire Slayer. And don’t waste your time trying to look for bigfoot. Trust me, we’ve checked. But there do exist fan made mods so go nuts.

Now it’s come to the decision on why I made this review, does it hold up. The answer is yes. But I don’t think it should still be considered one of the greats. I did enjoy myself a lot during this play through but I was never wowed by what I was seeing. Video games have improved a lot more since 2004 so it’s not really groundbreaking as it was back then.

But one thing Grand Theft Auto: San Andreas is definitely not is dated. The graphics don’t hold up at all but the story is what matters most. You can pop this in anyday and not feel like it’s a product of it’s time. That’s probably why people enjoy coming back to it. It has a lot of replay factor and it brings us back to when we’d play it endlessly in the comfort of our home or at a friends house. I can see myself going back to this any day.

With that, it is my honor to give Grand Theft Aut0: San Andreas the Thumb Culture Gold award 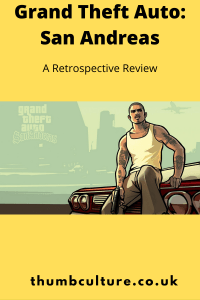