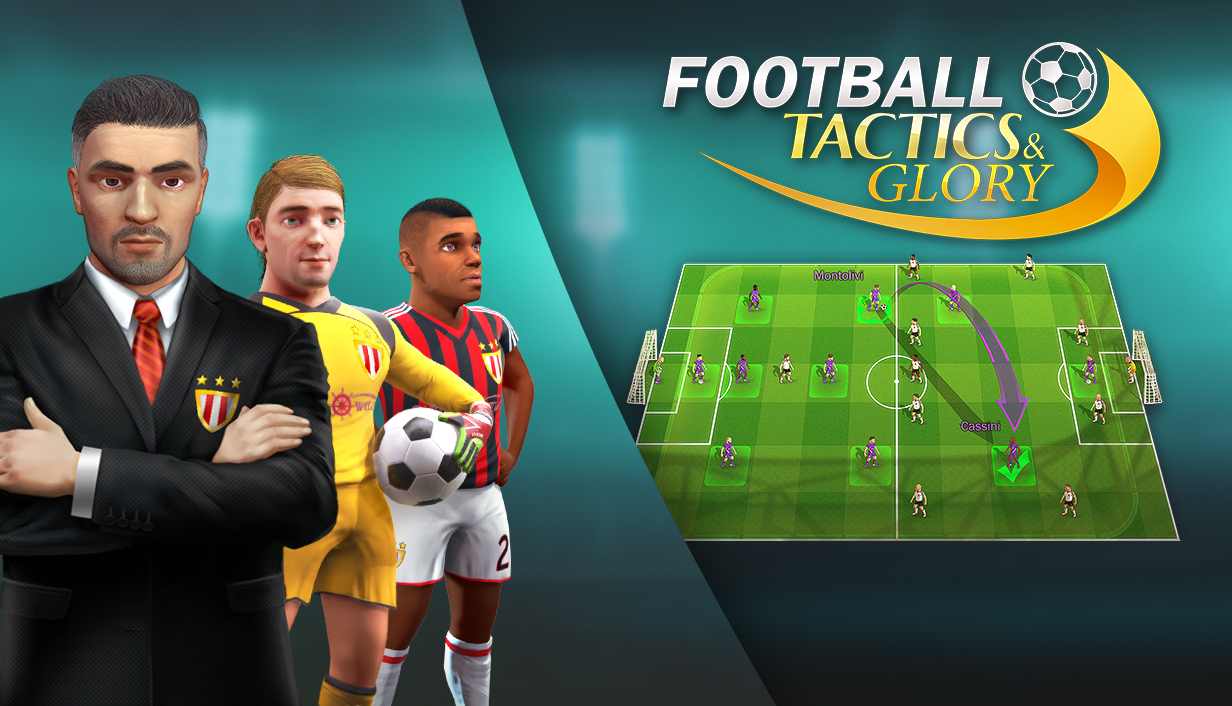 As a child of the 80s/90s, I grew up around what can be said were the classic Football Management games. Premier Manager, LMA Manager, Championship Manager etc. as well as seeing the evolution of football games in general to include a management mode (PES, FIFA).

Football, Tactics & Glory is a rather unique take on football management and gameplay from Creoteam. Stripping away all the complications of some of the more well-known Management Sims and giving us more of a turn based strategy style game.

The question is, does this new style work well in a football game? Or should it be relegated into the abyss of forgotten attempts (Yes Total Football Manager I’m looking at you).

Football, Tactics & Glory pretty much throws you straight into the action, giving the background of how you are a former player forced into management. The good news here is that it works as a tutorial all at the same time. So you’re not randomly pushing buttons to see what you need to do.

For anyone old enough to remember Penalty (The Football Board game). I find Football, Tactics & Glory is a very similar setup and may well be where Creoteam had the idea for this sort of game. 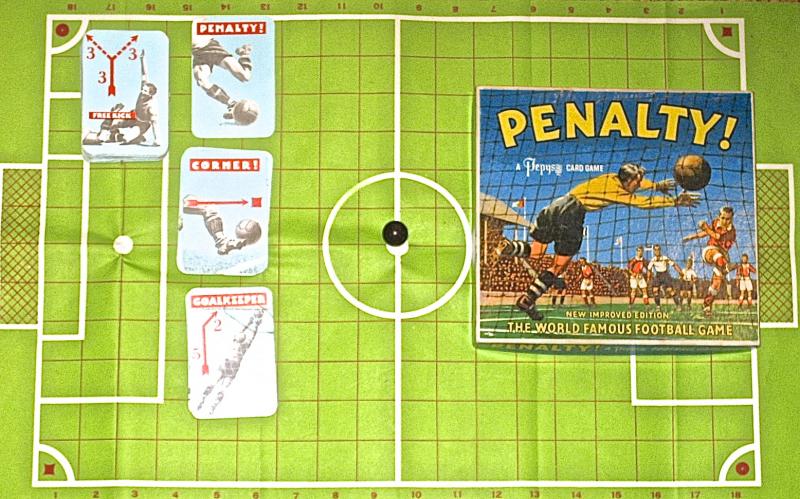 The aim here is like any other football management game, to take your team to highest club honours possible, The European Cup (Or the Champions League as we know it).

As a bit of a throwback to the old school Football games, your players have 4 stats (Accuracy, Passing, Defence, and Control). Depending on the position they play will depend on which stat you’re looking at. A nice and simple layout reminiscent of the original Premier Manager.

Training the players is also just as simple, select one of the 4 options and they will focus their training on this, although there doesn’t seem to be anything listed for fitness which would have been a nice addition especially for players that are just back from an injury. 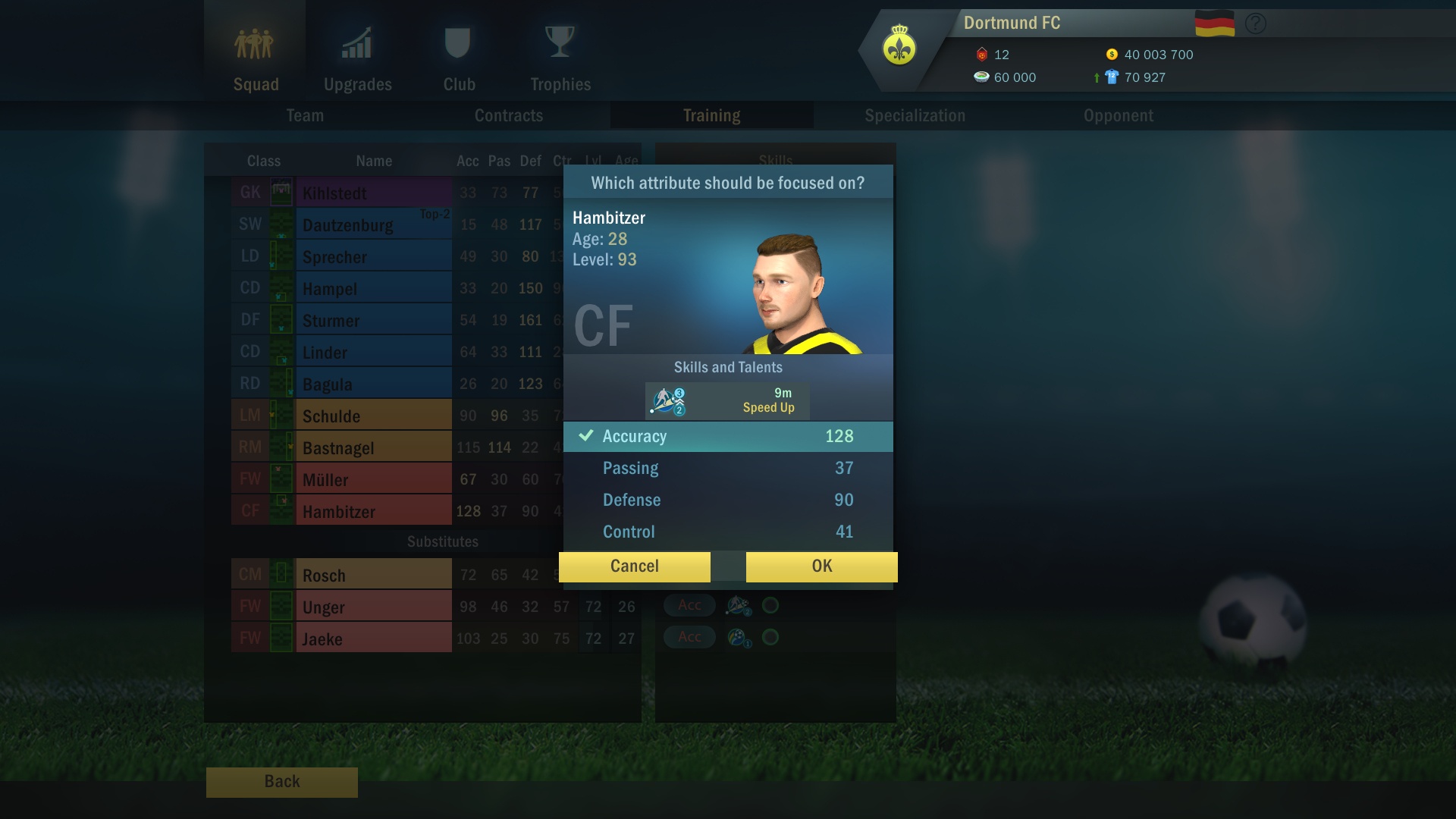 Once training is done, all that is left is the team line-up and then playing the match. This is where the game really becomes its own thing. Instead of putting up a standard football formation as you would in most games (4-4-2 etc.) you have to set your team up as though you were playing a turn based RPG, to anticipate and counter your opponents strengths and attacks. 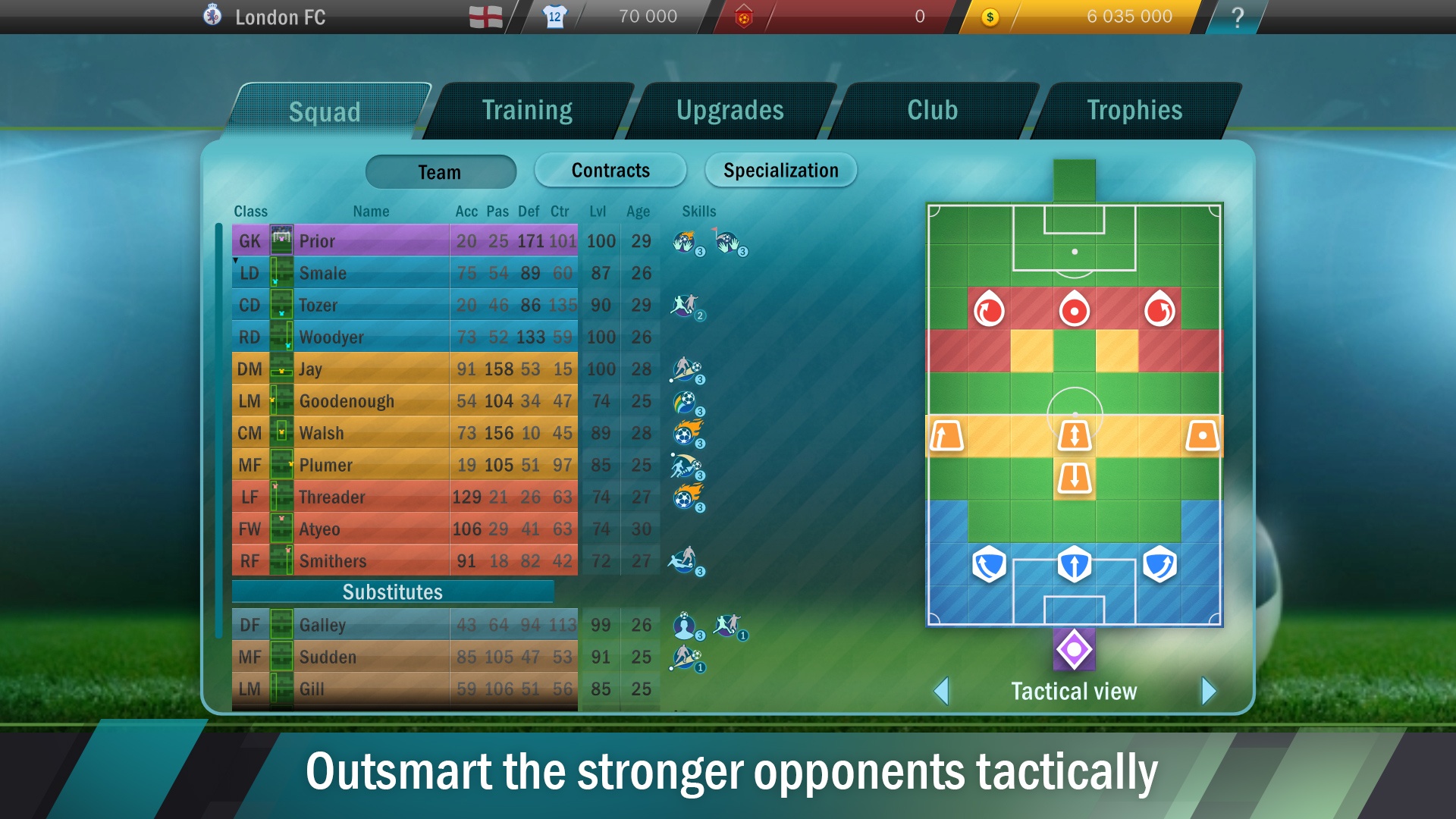 The Match mechanics are simple to understand but can become pretty complex to master if you want to delve into exposing opponents weaknesses. The outline of the game is that each team takes a turn of 3 moves, in those 3 moves as you would expect the aim is to score. How you lay out the team in the line-up will help with this as you want to make sure you get the ball as close to the goal as possible within 2 moves to enable the final move to be a shot on goal, while at the same time making sure you don’t compromise your defence as after your 3 moves the opposition will do the same. 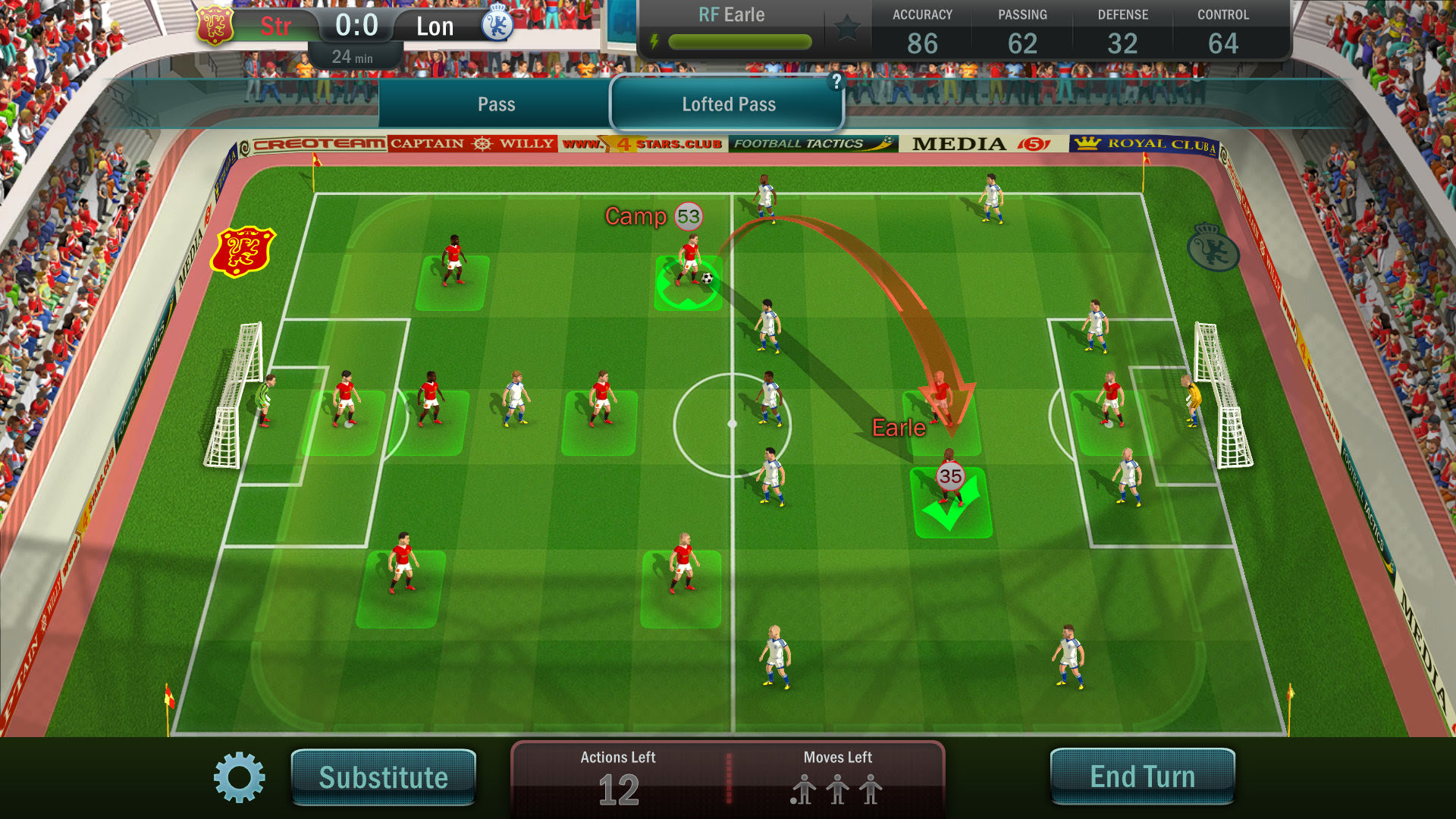 All of this runs very smoothly and can be both addictive and frustrating at the same time. The appealing part of this game to me is that it feels much more casual than something like a Football Manager. A game that can be played while sitting back with a cold drink and some snacks without having to stress over the amount of time left in the game to make your subs.

Just like with the gameplay, Football, Tactics & Glory is a simple looking game, much as I would expect. Nothing overly taxing for a PC to handle. There are some video scenes for things like Kick-off and Goal Scoring, all of which look very nice (even if the players look more like Footballer Bobble heads). It fit very nicely with the style of the game and its casual feel.

If there was one thing that I found a little annoying at times it was the goalmouth and specifically the way the ball travels through the side netting and in for a goal. I would have preferred to see the net deflect the ball rather than it just be there as a visual marker.

Nothing major to discuss here. The majority of the audio in the game is crowd noise (as is the case in most football games). It sounds ok, nothing special but having said that it’s very rare that I have the audio on when I’m playing these sorts of games anyway. I usually have some of my own music on in the background. So I don’t think it’s something that is going to cause any problems with the enjoyment of the game.

This is one I always find difficult to decide on with Football games or sports games in general. It’s more personal opinion and how much you enjoy the sport than anything else. There’s plenty here to keep you playing with multiple leagues in multiple nations. Battle your way through before starting all over again with a different club for a fresh challenge.

I don’t think it’s a game that you’ll sink countless hours into over a short space of time. Or one you’ll play into the early hours of the morning because you lost track of time. I found that after half a dozen games I was ready for a new challenge. I actually liked that about the game as I found the next day I wanted to get stuck into another few games, or had an idea for a new strategy I wanted to try out.

Football, Tactics & Glory is a nice addition with its own twist to the Football Management genre, especially for younger gamers or more casual football fans. I think it would make a very nice addition to other platforms, especially mobile gaming with the touch screen options.

Given its current platform on Steam, I expect to see lots of items in the Workshop very soon customising the team / player line-ups to be more ‘official’ but personally I like it as it is. I think if it had full licenses the expectations for the game would be too high for what’s on offer