You palms sweat in the moments before combat.

Your heart beat is steady, resting in anticipation of the adrenalin surge to follow. Time counts down and you look deep into the eyes of your team, knowing that some or all of you may not come back.

That’s the risk you take as a mercenary. A gun for hire. A soldier of fortune.

A quick wipe of your palm and a readjustment to improve your grip. The command comes and you move out in co-ordinated attack patterns, laying down covering fire and calling out targets to teammatesBullets whizz past you, smashing into walls behind you. Every corner is a death trap, every foot step a betrayal of your location. At the sound of enemy fire, you step back into the alley, blind firing  around the corner, hoping your bullet hits it’s mark, before theirs hits yours.

Then your other half walks in and asks what the hell you’re doing crouching in the middle of the living room with a gun that looks like it’s made out of plastic pipework with a lightbulb on the end.

This is Firewall Zero Hour. 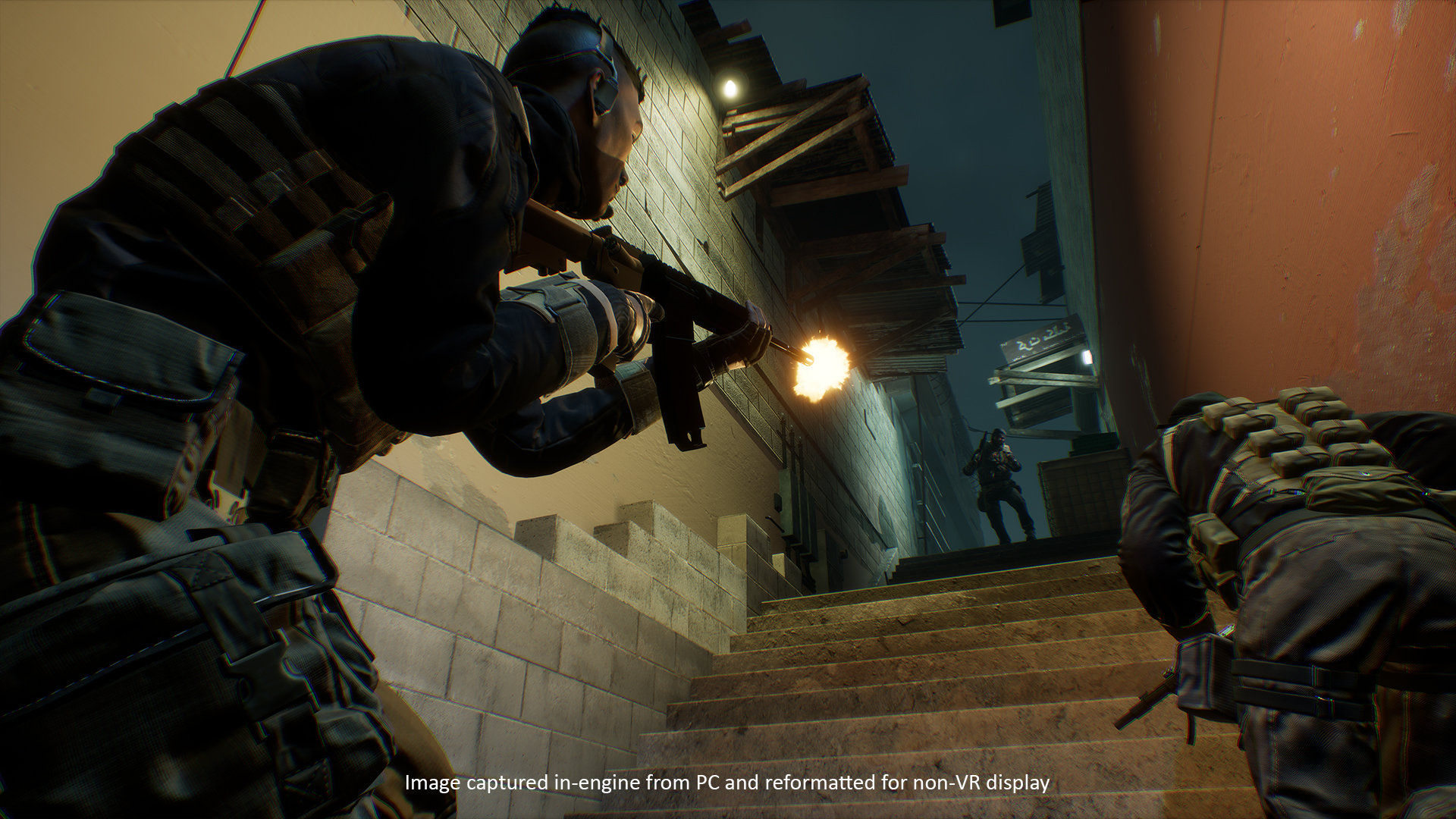 Firewall Zero Hour is not a great game. It doesn’t have a campaign mode and the multiplayer element is a bit broken, there is no host migration and matchmaking can be slow. On occasions I have experienced controller drift where the angle I hold the gun is nothing like the way it appears on the screen and because it takes a while . Everyone wanted CoD in VR and what we got isn’t that. It’s not the game we wanted, but I do believe it’s the game we need.

You see, humans are a naturally lazy bunch. When given choices we usually go for the easy one and one of the easiest way to get people to do something is to get rid of friction, those things that make achieving something harder. Imagine if every time you wanted to go online you had to power up a PC, plug in a dial up modem and then log in to your AOL account before you could use the internet, and you start to understand why internet usage is so much higher now than it was 25 years ago. It’s the same with video games. When you had to put floppy discs or CD-ROM’s into your computer and wit 15 minute for your game to load, you had to be pretty damn sure you wanted to play it before you started the process.

But like most things in life, technology came to the rescue. High speed HDD’s and solid state memory mean we can get games at the press of a button (or screen) with next to no delay. Despite the level of complexity and design that goes into a modern console game, they still load faster and run quicker than ever before.

Or they did, until PSVR came along. Suddenly the process of playing a game became more complex. Its minor stuff, but plugging your headset in, making sure your controllers are charged and ensuring you don’t a)trip over the dog, b) smack your other half with a Move controller, or c) tread on your kids lego, all add tiny hurdles to the process. And I get why that means that some people see this as a fad.

But good VR is a truly immersive experience. I have stood atop mountains and been speechless at the sights. I’ve felt vertigo as I stood on a precipice. I have slain dragons, flown planes, piloted giant mech-suits and explored the oceans depths. In my virtual worlds I have been an all-powerful wizard, a skilled archer and own a fleet of sports cars. But all the time you do it a small nagging voice reminds you that you look more like Alpha 5 than your digital avatar. It takes a lot to get over that.

Perhaps the biggest change in gaming over the last 20 years is the development of online, multiplayer gaming. Instead of waiting to see your mates at school to discuss how you got on with a game, you could meet up online, play together (or against each other) and make new friends and groups if like-minded people. It gave a sense of community that linked gaming with the real world. PSVR has a much smaller base and as such the online community seems to have been mainly on social media and not on the platform itself.

When RecRoom came out I was hopeful, and the first few times I met good people who wanted to play games and talk and experiment, but it quickly became the residence of kids and trolls. I held my breath with anticipation when Bravo Team came out. An online FPS with tactical elements sounded perfect, but the game did not live up to the hype and the online community was nowhere to be seen (partly out of shame of buying the game).

PSVR players got used to cheap, short titles that gave a good experience but a somewhat narrow experience. There had been good games, but lot of the came early in the lifecycle of PSVR. Skyrim, Farpoint and Resident Evil 7 had all floored people with their size and design but nothing had come along to equal them. For months there had been rumblings of a successor. Another First Person Shooter which would give PSVR gamers a real taste of tactical warfare. Video appeared online and we dared to dream that we might get the game we had been promised. Rumours arose of 4v4 matches with a Rainbow Six Siege feel, but they were whispers and we were rightly dubious. But the second that Firewall Zero Hour was released, there was a seismic shift in the player base on PSVR. While all of the other titles had divided people and had small splinter groups. Firewall Zero Hour seemed to bring people together and was widely loved by players. It was one game to rule them all and in the darkness (of your VR headset) bind them.

It is not a perfect game, some people have moaned about the absence of a single-player mode, but Firewall Zero Hour never claimed it did. It’s a first person, tactical, 4v4 team shooter which is played in VR and, ideally, with the AIM controller. The maps are varied and the ability to unlock modifications and player and weapon upgrades is spot on and it gives a real need to play just one more game.

But this is not a review of the game. This is about the experience, which is excellent.

The game is completely immersive. Your hands sweat as you approach a door and peer around the corner, praying not to get sniped. You have to talk to your team and upon landing in the map I found myself switching to tactical commands. Hearing people call “clear your corners”, or “tango down” adds to the make believe that is PSVR. But the experience is so good that you don’t care if someone (in the real world) overhears. I have risked my life for my team to give them a target to aim at, risked my (virtual) life to resuscitate a team mate, and felt the disappointment of letting my team down.

The community around this game has been largely great. No kids, and a lot of people who want to talk games, PSVR and Firewall Zero Hour in the lobbies, all willing to suspend all disbelief for 5 minutes as you turn into a team of gun-toting mercs, ready to hack or defend firewalls and data for an unknown paymaster. In the lobby area I’ve talked about games, given advice and asked questions, of complete stranger. Hell, at one point I ended up talking with a bloke from Yorkshire about how long it takes to make a cup of tea and whether I could get one before the next round (I could and did). With mic’s on I met and played people from across the world who were also willing to make believe. 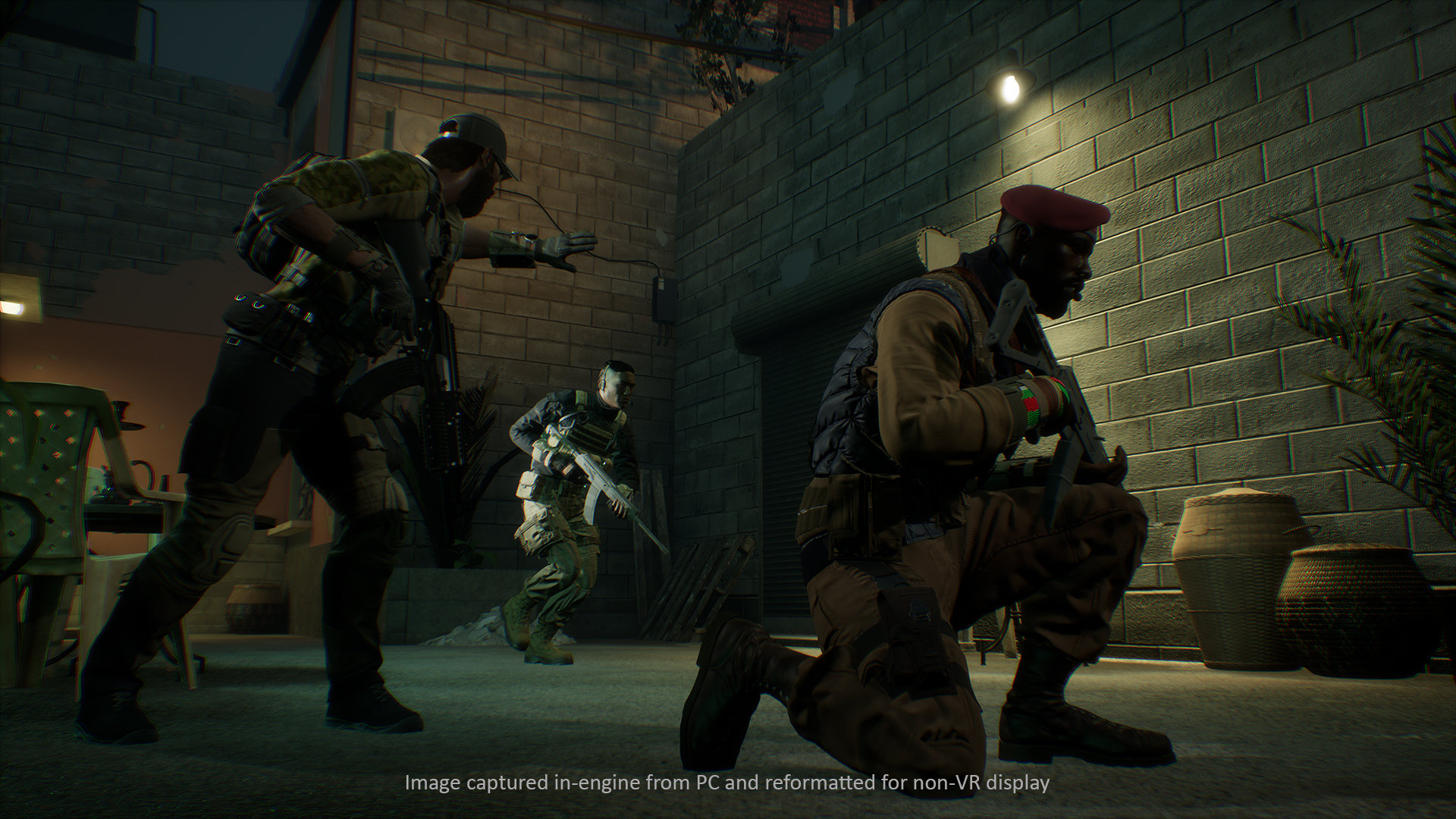 For PSVR to thrive and develop it needs titles like this. Fun games which bring people together. Which build teams and friendships. Games which you choose to play because you know people are online and you get to switch off from the real world and truly be someone else for a while. PSVR is a fantasy and it takes a lot to get people to completely switch off.

Firewall Zero Hour may not be perfect but it is a great game to play and exactly what the community and the console needed.