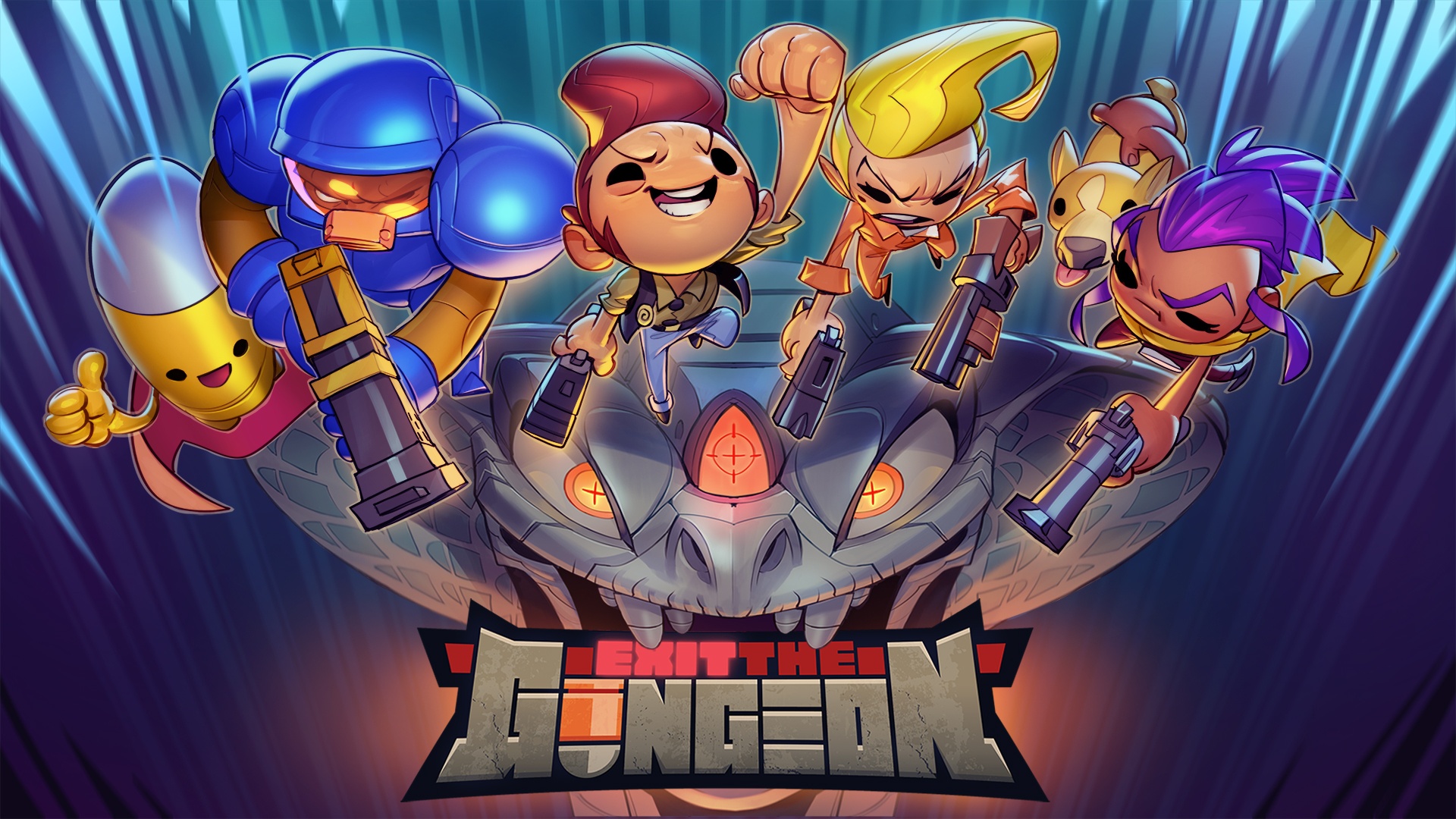 Enter the Gungeon released on Nintendo Switch back in late 2017. For the uninitiated, Enter the Gungeon was a rogue-lite with more guns than you can shake a broomstick at, and it hooked me immediately with its fast-paced, bullet-hell action and wild boss design. The story, such as it was, revolved around four characters entering a towering structure called The Gungeon, which was populated by sentient, aggressive bullets.

They had each heard the legend of a revolver which could kill the past and wipe out mistakes. Weapons ranged from bog-standard shotguns to screen-dominating lasers. And that’s not all, we’re talking egg-firing grenade launchers, a guitar which launched wild solos as you hold down the trigger… even a t-shirt cannon. Exit the Gungeon picks up after each character achieved their goal of killing their respective pasts. Unfortunately, The Gungeon is crumbling around them as a result of their actions. The only way out is via a series of rickety elevators. What’s more, the naughty bullets are back in full force. Thankfully so are the guns.

Publisher Devolver Digital originally launched Exit the Gungeon on Apple Arcade and it completely passed me by. I was thrilled when it stealth-dropped after the last Nintendo Indie Direct, and I begged bossman Stu to try and grab a review code for me. Stu naturally delivered, but will Exit the Gungeon?

With Exit the Gungeon developer’s Dodge Roll and their new partners-in-crime Single-core have brought some significant changes to the table while re-using many of the enemies and weapons from the first game. Most strikingly, the latest entry in the Gungeon series is an action-platformer rather than being a top-down affair. Gameplay still revolves around clearing each level of a wide variety of enemies, each with their own attack patterns. It also still involves using a wide array of insane weaponry. However, this time around it’s Super Mario Bros rather than A Link to the Past which has been crossed with R-Type.

If you fear an accompanying drop in difficulty I can reassure you that the bullets are as hellish as ever, and Exit the Gungeon feels more claustrophobic owing to the side-on perspective. Compounding this, much of the action takes place aboard an elevator. A lot of the screen real estate being taken up by the walls either side of you. This is presumably so the game would be more playable on phone screens. Avoiding hundreds of fast-moving bullets in an enclosed space might sound impossible, but thankfully (and somewhat counter-intuitively) you are invulnerable when you jump, giving you a means of avoiding certain doom even in a pinch. The dodge roll from the first game is also present.

Enter the Gungeon was heavily dependent upon randomisation, a staple of rogue-lite games. This meant that level layouts and the weapons, items and currency you came across over the course of the game would differ on each playthrough. Exit the Dungeon takes this a step further, with your gun changing randomly and automatically every few seconds based upon your performance. If you are fighting particularly well and not taking damage you will receive more powerful, higher-tier weapons. Dodge Roll has removed the unlockable loot chests.

This removes the strategic element of the first game, in which you needed to decide whether to buy a key to unlock a chest which might contain a devastating firearm (or a water pistol) or drop the money on replenishing your health. Gone also is the need to conserve ammunition or reserve better weapons for boss fights. This is a double-edged sword. With the focus now entirely on action Exit the Gungeon is a more thrilling title, but removing player choice has made the experience feel more on-rails. Furthermore, sometimes an unexpected weapon change can completely mess you up. I found the charge weapons, which do not fire at a continuous rate, in particular, disrupted my playthroughs. In Exit the Gungeon you need to remove threats before they become overwhelming. Some weapons just aren’t suited to taking out large groups of enemies quickly.

Exit the Gungeon is extremely difficult but not particularly long. You need to learn how to predict and avoid enemy attacks if you are to survive, and that knowledge will come with repeated attempts. Death resets your progress, although killing bosses earns you currency. You can use this to purchase items and weapons in the hub area. Exit the Gungeon will then throw these into the randomiser in future runs. As in the first game, I find this system a bit unrewarding. It’s entirely possible to unwittingly unlock a sub-optimal weapon which is an absolute pain in the arse to use, and it doesn’t necessarily give you the feeling of progress you might be looking for. There are also characters you can release from captivity throughout your journey, and these will then take up permanent residence in the hub or begin to appear throughout The Gungeon’s levels.

Upgrades come via floating collectables, chests which appear at the end of sub-levels and a shop which can be visited at certain points in each campaign. The floating collectables appear at random. Sometimes you’ll see nothing appear for an entire run, whereas once I received two pieces of armour within 30 seconds of each other.

The same core four playable characters return (in addition to a couple of secret ones), though they feel more similar to one another than in the previous game. The marine no longer starts with additional armour. The pilot thankfully loses his puny default weapon almost immediately due to the randomising mechanic, but he also loses his now useless ability to attempt a lockpick on locked chests.

At first I couldn’t get into the vibe of Exit the Gungeon. I found the dodge jump difficult to use effectively. I also felt that some of the carried-over enemies didn’t work as well in a side-on setting. My opinion began to change once I passed the first level. Each gungeoneer has a different route through the Gungeon. The pilot appropriately steers his elevator through a void, dodging ice blocks and enemy fire while taking out the opposition. The Hunter is made to endure an elevator which stops, starts and occasionally goes down instead of up. The surprises keep coming, and each campaign feels unique. The balance of action and platforming is amazingly fun, bringing to mind Sega Mega Drive classic Gunstar Heroes.

Boss fights are back and just as intense as those of the first game. Mastery of vertical movement is crucial to success. These fights are fairly insane, but the dodge jump mechanic makes it all feel a bit fairer. Playing this iteration of the Gungeon series got me thinking what Dodge Roll could do with Contra…

Unfortunately, it’s not all positive. Frame rate drops are significant and frequent. This can be incredibly frustrating during boss fights where a mistimed dodge can easily kill you or mess up a perfect run. I’m positive Dodge Roll will fix these issues given the phenomenal work they put into the previous game post-launch. My score based on that assumption. Dodge Roll already have a patch which is ready to go. You might want to check if it has been released and if it fixes the aforementioned issues before purchasing. Buyer beware etc.

Exit the Gungeon is a less expansive experience. The original title was dripping with secrets and Easter Eggs but Exit the Gungeon feels more linear and predictable over multiple playthroughs, partly because the experience of riding the elevator is always pretty similar. The re-used enemies and guns are perhaps indicators that development time was not at a premium. If you’re familiar with the previous game you’ll immediately feel at home. That being said I suspect experienced Gungeoneers are ready for new challenges and even crazier firearms.

All that being said Dodge Roll are fantastic developers, and a recent Reddit post concedes that Exit the Gungeon is a smaller game while promising loads of delicious future updates. It’s developers like Dodge Roll, Team Cherry and Yacht Club Games (the latter two of Hollow and Shovel Knight fame respectively) which make the indie scene so exciting, with their commitment to delivering extra content to loyal (and even disloyal) players.

Exit the Gungeon features high-quality sprite-work. The glowing neon pink bullets are as pretty as they are deadly. Backgrounds are more dynamic this time around. The walls rushing past you lend a thrilling sense of speed to the already frenetic action. The presentation is generally excellent, with excellent animation setting up the narrative.

Dodgeroll has carried much of the music from the first game. The synth-laden grooves settle into the background pretty well. It is repetitive but works for a short, difficult game which involves replaying the same levels over and over. The weapons sound meaty and powerful and they’re a treat to use.

Exit the Gungeon is fairly short. You can complete each campaign in just under an hour. You can unlock characters which add longevity, however. Be assured that you won’t be finish it in one sitting. Like Enter the Gungeon, Exit the Gungeon is tough. It’s hard to imagine how the game could be played on a smartphone.

I give it the Thumb Culture Gold Award.