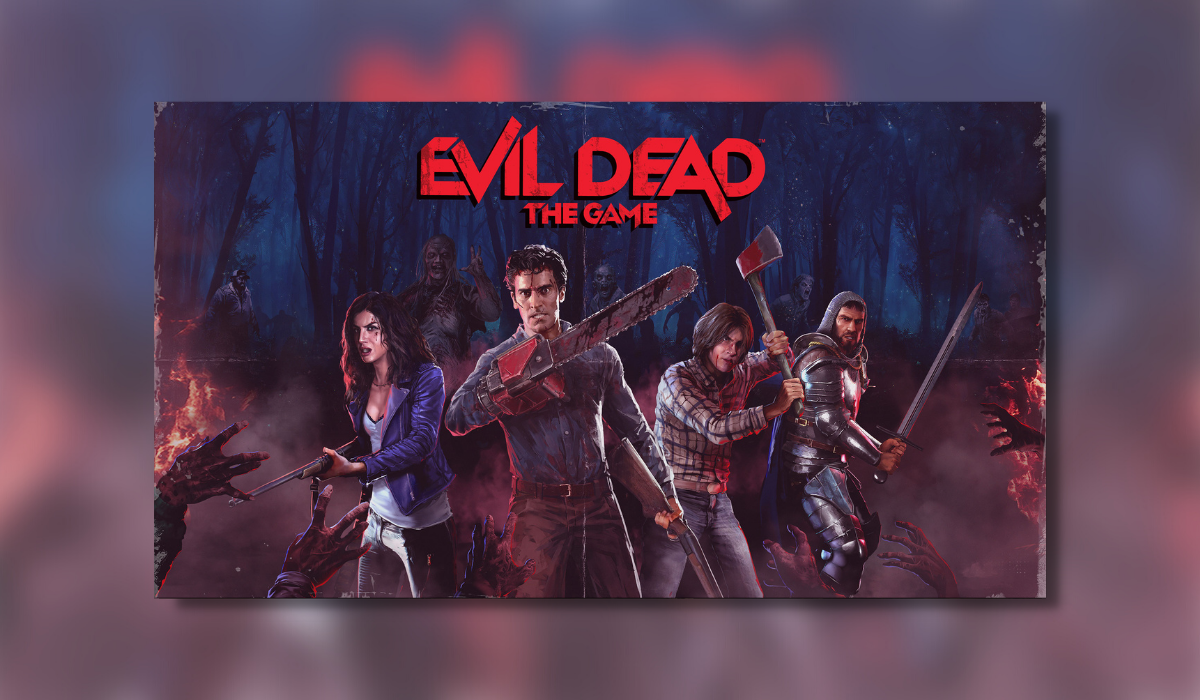 Sabre Interactive announced Evil Dead The Game at The Game Awards in 2020. Currently available on Playstation, Xbox, and PC. Sabre Interactive has confirmed that the game will be coming to Nintendo Switch soon as well.

It is inspired by The Evil Dead film series and STARZ Original Ash vs Evil Dead television series.

This… Is My Boomstick

The asymmetric multiplayer game Evil Dead The Game combines iconic characters from its films and television series. Become one of four survivors (Leader, Warrior, Hunter, or Support) or one of three demons (The Warlord, The Puppeteer, or The Necromancer) and stop the survivors from reaching their goal.

The latest title in the 4vs range that includes Dead by Daylight and Friday the 13th. It is your goal to collect three map pieces located in three different sections of the map close to you. If you complete this goal, you will learn where to find both the Kandarian Dagger and the Necronomicon Ex-Mortis. To win, you will need both of these before you can face off against The Dark Ones and defend the Necronomicon. You are tasked with stopping the survivors by eliminating them all as a Demon. Survivors can, however, revive bleeding teammates or take the soul of a deceased teammate to a shrine.

As well as an in-game levelling system, survivors can also collect Pink F bottles from loot crates scattered around each level to increase their level. Demons can also level up by their actions in the game. You will receive a point for each of these, which you can spend in a category of your choice to improve your chances of success. Levelling up your character outside of the game is also possible.

Demons spawn deadites (think zombies) to attack/possess and scare the survivors, it is also possible to set traps using loot boxes and jump scares. By increasing a survivor scare level you can do a lot more. They however can reduce this by collecting matchsticks to light a fire.

There are some single-player options that include both a tutorial and as a survivor with AI teammates. You can also complete missions which will unlock additional characters and content. These missions are not for the faint-hearted as the difficulty is increased.

There are some drawbacks to the game, with only 2 maps, it can feel repetitive. While Sabre Interactive has confirmed another map will be part of the Summer DLC (free), they are keeping their cards close to their chests. A more “off-road” approach can cause huge problems for drivers, who often end up with their cars on their sides because of the terrain. While it will take time for it to become as diverse as Dead By Daylight, we can only wait and see how the fixes and content are released.

Voice chat really needs to be pushed more as in every game I have played not a single player has utilised this, instead they rely on the ping system to give locations. It is fair to say that with a group of friends this can be a huge amount of fun.

Playing on a next-generation console has taught me to appreciate how good everything looks. I did have a couple of random issues, but this was more due to the terrain making cars do strange things. Hopefully, this is a simple fix because the game is otherwise fantastic. Possessed trees simply blend in, adding to the creepiness. The infamous cellar door makes a brief appearance, which will delight series fans. The artwork in the menu options is beautifully designed to fit in with the game, and it is the attention to detail that truly helps to distinguish the game.

The audio experience really works well, as you become more scared the music builds up, deadites jump out at you from portals. I don’t want to spoil the jump scares, but there are a few funny ones in there as well.

A very polished experience where both the audio and graphics work extremely well for this style of game and balance well.

Depending on whether you want to level up your survivors or demons, there is a lot to do. The missions themselves will take around 2hrs 30 minutes or 30-45 minutes each of the 5 missions. The majority of your game time will be based on the multiplayer objectives and skill levels. If you are a fan of the Evil Dead franchise you are likely to spend a lot of time with this

The Evil Dead Game is a must-have for fans of the films and the series. For those players who haven’t seen either, you can still jump in and pick it up quickly. The 4vs range of games is extremely popular and hopefully Sabre Interactive provides more support than Gun Media did for Friday The 13th. Sabre Interactive have the benefit of the game being delayed a few times to polish it off and make adjustments, and to their credit, I’ve not had any single game-breaking bug or crash.

I definitely enjoyed my time and will continue playing for a long time yet. It is for this reason that I award Evil Dead The Game the Thumb Culture Gold Award