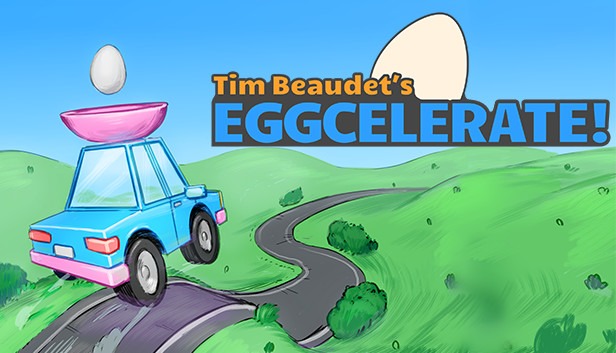 If you have ever wondered what an egg & spoon race with cars would be like then Eggcelerate! is the game for you. A light-hearted racing game where the goal is crossing the finish line with your egg intact. It may sound simple but this indie game will keep you on your toes. Think Trials Fusion but in a car and the added challenge of an egg in an open-top container. Eggcelerate! was developed and published by Tim Beaudet in his video game debut and is available now on PC.

Eggcelerate! – Learn first hand why not to put all your eggs in one basket

I had a lot of fun playing Eggcelerate! and hopefully, you did too. The Thumb Culture team and I would like to hear what you thought. Why not leave a comment below on what you thought too.

Eggcelerate! is a straight forward time trial racing game where it is just you and your egg on the track. The game begins instantly on course one and as you progress to the next, adapt to the different tracks. The game is single-player and has a set number of tracks to play through but no two are the same.  Each track having changes in terrain and various obstacles from ramps to giant mallets to get in your way. This variety led to different ways of navigating the tracks which helped the game feel fresh. All the while keeping up a literal balancing act as one wrong move and your egg is toast on the tarmac. With time challenges too for the competitive players among us.

The variety of challenges and difficulty of Eggcelerate! was excellent (pardon me, egg-cellent). Building upon obstacles introduced on previous tracks and combining them for extra effect. I’m not ashamed to admit, one or two tracks had me close to rage quitting. But staying the course and reaching the finish line was very satisfying. An unnecessary challenge though was the camera angle. The camera was always fixed and when going through different terrain or along ramps made the driving feel very awkward. For the times the egg does break a fried egg will stay at that point. Serving as a reminder of which points and how often this happened.

I’ll admit this is my first Easter-themed game that is handled well in the environment’s design. The background of levels have a feeling of Spring and of course artwork of bunnies pops up now and then. Eggcelerate! also includes various options to customise your car. From the car itself to the basket and egg itself can be chosen by you or at random. Purely aesthetic changes but I appreciated the opportunity to change up the look.

While Eggcelerate! doesn’t use high-resolution graphics it doesn’t take away from the gameplay and level design. The graphical design went for a less realistic choice and so more friendly to younger players. I found that it works well given the light-hearted nature of the game also. The visuals were very well done with the detail and vibrant colours of the environment. The animated obstacles and parts of the different levels all worked smoothly too.

The audio definitely leans into being silly with the sound effects of the car and egg breaking. They both sound like it is a person doing an impression of an egg cracking and the revving of an engine. Honestly, when playing and the silly nature of the sound effects softened the blow when starting over. The soundtrack is the same piece of music playing over and over but didn’t really feel stale. It was an upbeat piece of music and was an appropriate accompaniment to the driving.

Eggcelerate! is a single-player game and has a set number of tracks. However, completing them will take a couple of hours depending on your skill. And if you are not content with just finishing there are time goals too. Each track has a normal time set to complete. If you beat that time challenge then there is another from the developer himself. Overall I can see Eggcelerate! having 3-4 hours of gameplay depending on how much you do. I personally am going to go back and try to beat the time trials for all tracks.

I had fun playing Eggcelerate! being a departure from what I normally play but its light-hearted nature came at the right time. Short and sweet, may be completed in a few hours and suitable for all ages. The variety of the tracks and obstacles will keep you engaged and apart from some camera angles will feel natural to play. The graphics and audio will keep you entertained even as rage sets in on an especially tough part of a level. I am definitely going to back and beat the developers time when not feeling so fried. I, therefore, give Eggcelerate! a Thumb Culture Silver Award 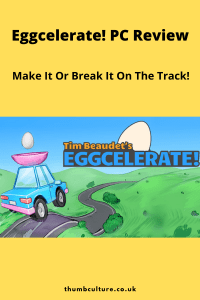