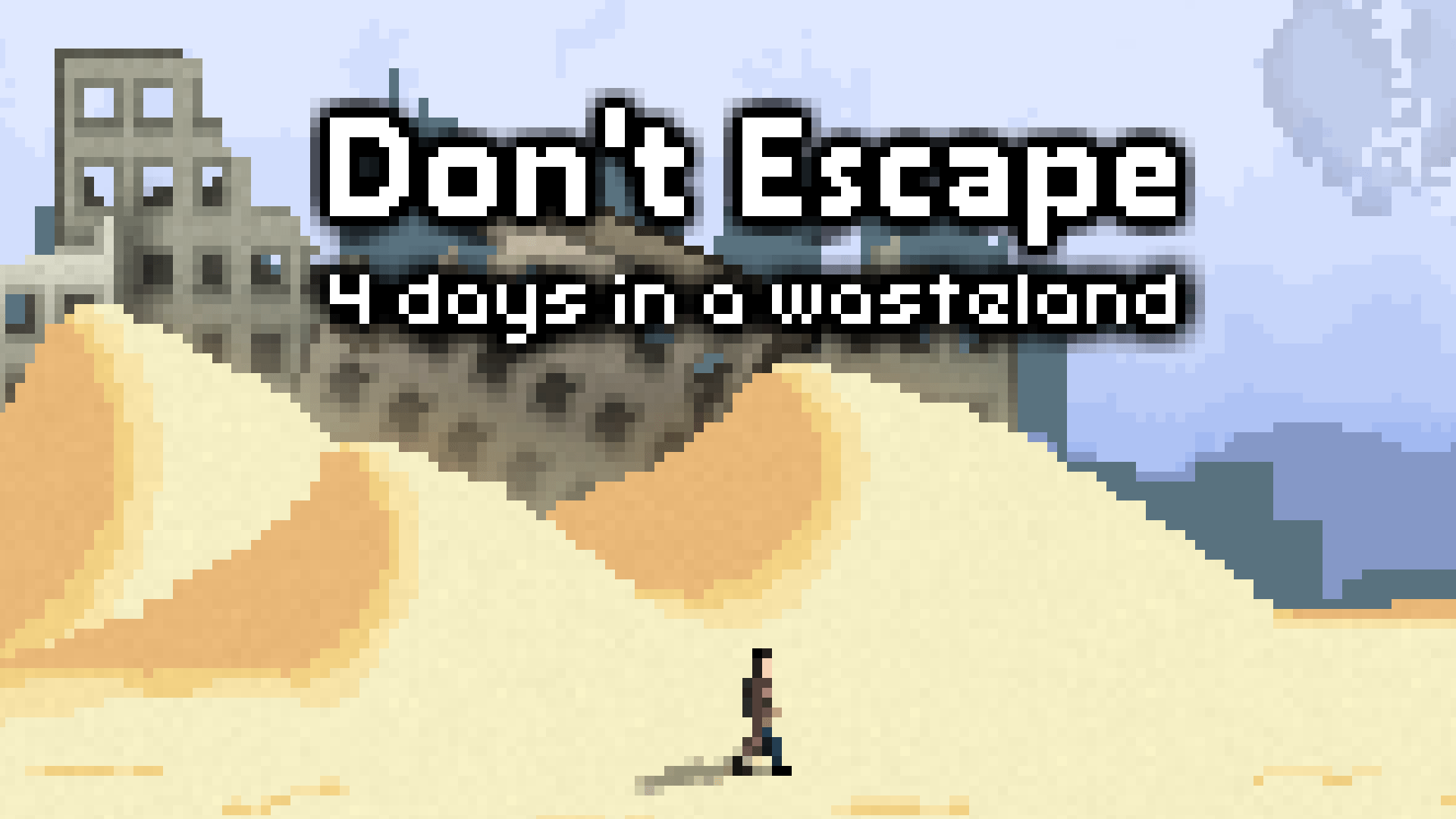 Scriptwelder bring us Don’t Escape: 4 Days in a Wasteland, the sequel to Don’t Escape 1,2 & 3. The question is, is it any good, or just a clever name? Well I decided to grab my hammer and chainsaw, as these are always useful, and headed on out into the wilderness to find out. Tally ho!

Don’t Escape: 4 Days in a Wasteland is a classic point and click graphic adventure. Find things, use things, get confused and so on. The style is retro 8 bit graphics, though you can change the font to modernise it.

You play a character called David. David has dreams that are really premonitions. Use the dreams to ensure that you protect yourself from the dangers that lurk over a 4 day period. All you have to do is put plans in place to stay safe overnight. Sounds simple enough, good. The cursor helpfully changed to a circle when you are hovering over something you can collect or interact with. Pick things up, get clues along the way, this is right back in the days when graphic adventures were the games to play.

On day one you have to protect yourself from a plague of ravaging locusts. Just find a safe place to stay and make sure that they don’t get in. There is more than one way of completing this task, so think first, but also think fast. The game has a ticking clock, though not all actions run it down. Every time you perform certain tasks time will ebb away until dusk arrives. Later in the game you get some friends, these will assist with the tasks so you can perform them quicker. This was a really nice touch and suddenly made it important to make friends.

Don’t Escape: 4 Days in a Wasteland is very engaging. Solving puzzles is what keeps my interest in a game, if I am thinking about what to do next, then it’s a winner. Use the crowbar to get the nails, it’s common sense really, but it’s not all common sense. Initiative takes over and you need to start thinking outside the box as the clues become less and less. After initiative takes over frustration kicks in. Use every item with every other item to get something to happen. Use every item with every interactive part of the game to get something to happen. Move the cursor over every location very slowly to see if you have missed something. Don’t Escape: 4 Days in a Wasteland is not without it’s faults. I want to jab the spade down the chimney to shift the blockage, but I am not allowed to. Why can’t I shoot the gun down it to remove the blockage? Why are my actions restricted with no real reason? This is where the frustration really kicks in. Sometimes it is possible to overthink things. To be honest, I really wanted to dangle a small child down the chimney, but he was sensible enough to stay inside when I went onto the roof.

Don’t Escape: 4 Days in a Wasteland has an engaging storyline and diverse characters, even if they are somewhat irritating and cliché sometimes. There is some good humour in the game, in fact, the dryer your sense of humour, the more you will appreciate it. I didn’t just like Don’t Escape: 4 Days in a Wasteland, I enjoyed it, the nostalgia trip was good, so maybe younger players would not appreciate it as much, who knows?

Don’t Escape: 4 Days in a Wasteland have nailed the authenticity of the retro. I really like not only the graphics, but the animation sequences as well. This part of the game really took me back and for a while I was a child again (well younger). It definitely had me wanting to have another play through of ‘Beneath a Steel Sky’ amongst others. This is genuinely one of the best retro games I have played for authenticity.

Don’t Escape: 4 Days in a Wasteland has the required audio one would expect from the game. There is the subtle sound track, the not to realistic sound effects and the irritating, but almost required, clicking sound for text. Retro is always a little easy to replicate as it’s nothing new, and Don’t Escape: 4 Days in a Wasteland has excelled at nothing new in this department. If it ain’t broke, don’t fix it.

How do you judge the longevity of a retro style game? Well the genre has lasted a long time, so it is without doubt that Don’t Escape: 4 Days in a Wasteland will have it’s players well into the future. Nothing new is bought to the table, but that doesn’t make it a bad game, the concept is old now, but it’s still going as strong as ever. Some of you might be under the impression that I liked this game, and you would be right. There is no definitive path to follow, so try a few different things, see what happens. Once you have played it, get the kids to play it, get them into the classics as well.

Escape: 4 Days in a Wasteland will have old and young playing a great graphic adventure set in a post apocalyptic world full of tricky puzzles with optional solutions. There truly is little not to like.

Disclaimer: We received a code to carry out this review, a task that was carried out over 4 very taxing days.