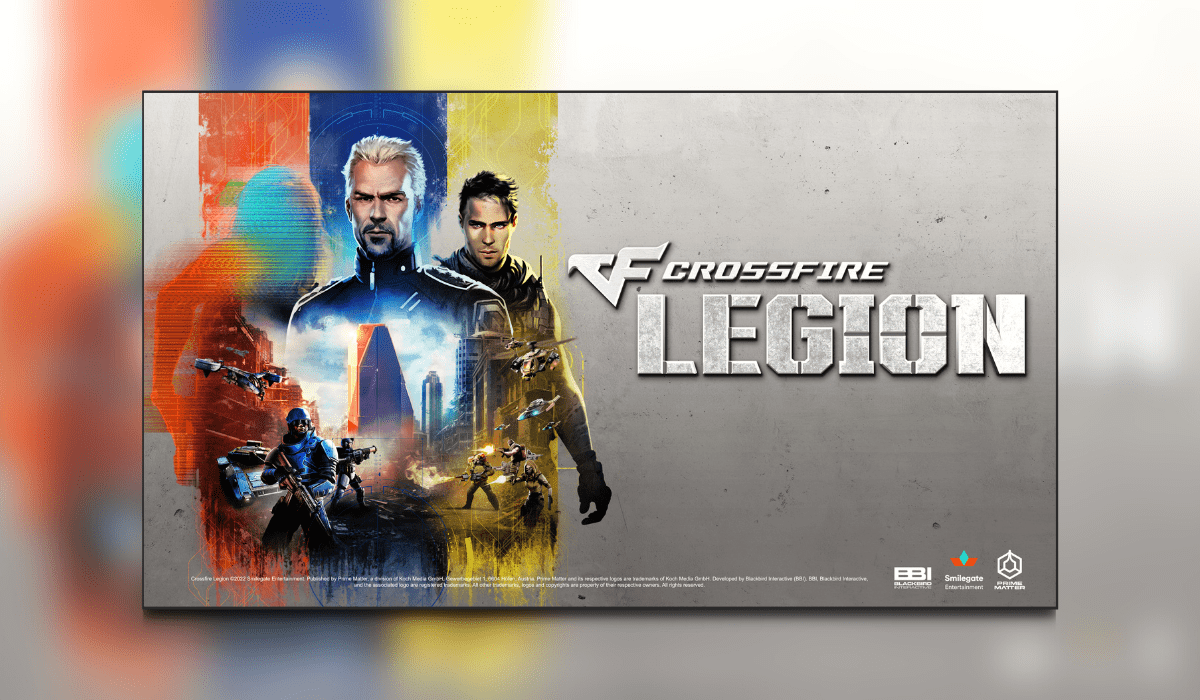 Developed by Blackbird Interactive (who brought you such games as the Homeworld series) and published by Prime Matter comes Crossfire: Legion. An RTS that is looking to hit you right in the nostalgic feels, as at first glance it seems to be a spiritual successor to the classic Command & Conquer.

Crossfire: Legion features some classic tactical action, reminiscent of that of a classic RTS that’s in the near future where you have to gather resources, build your base and build your army ready to battle against your foes.

Did you know it was a spin-off to Crossfire; an Online FPS that’s number 1 in the world with 690 million players and 8 million concurrent users?  I didn’t nor have I heard of the game before, but it is mainly based in the Asian market and, it’s highly successful on the Xbox.  It also has a TV series based on Cross with over 1.8 billion views.

— Kane (from the original C&C) paraphrasing a famous line from 1984.

Without a doubt, Crossfire: Legion looks like C&C, but how does it play? Let’s find out.

As this was a preview build, the game was quite limited. The only option you had was to create a custom game with bots.  That was fine as you could customize what maps and how many AI’s you wanted to play against in order to get a feel for the game.

The only option in the custom game was Standard Versus (Player Vs Player) and from there you had a choice of 2 maps.  They were: 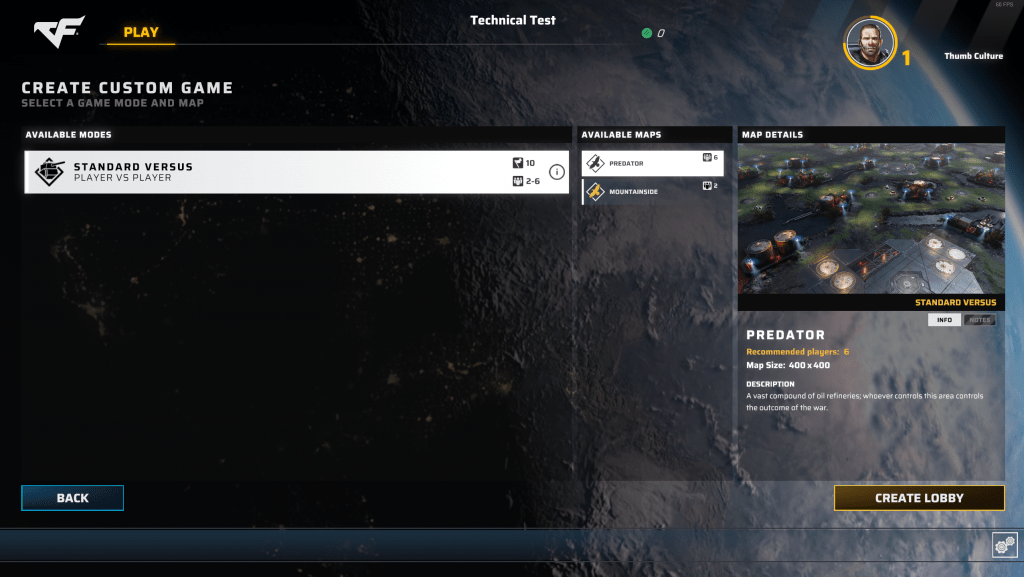 This is a smaller map, meant for 1v1.  This is the map I could see if there were tournaments etc. down the line as it’s a 220 x 220 map which is compact, but enough area that people can’t get resources and build a mighty army.

Once the map is selected, you then go onto one of the most important steps in an RTS; selecting your faction.  With this preview, we have 2 to choose from, but a 3rd is on its way in February.  For now, you can choose:

The Blacklist faction is a private militia fighting on behalf of the underprivileged nations of the world.  These have a playstyle that is fast and dynamic.  The commander of the Blacklist is Cardinal.  He has the Fire at Will ability and the Rally ability.  Both can be triggered during the conflict but then once used, it’s on a cool down. 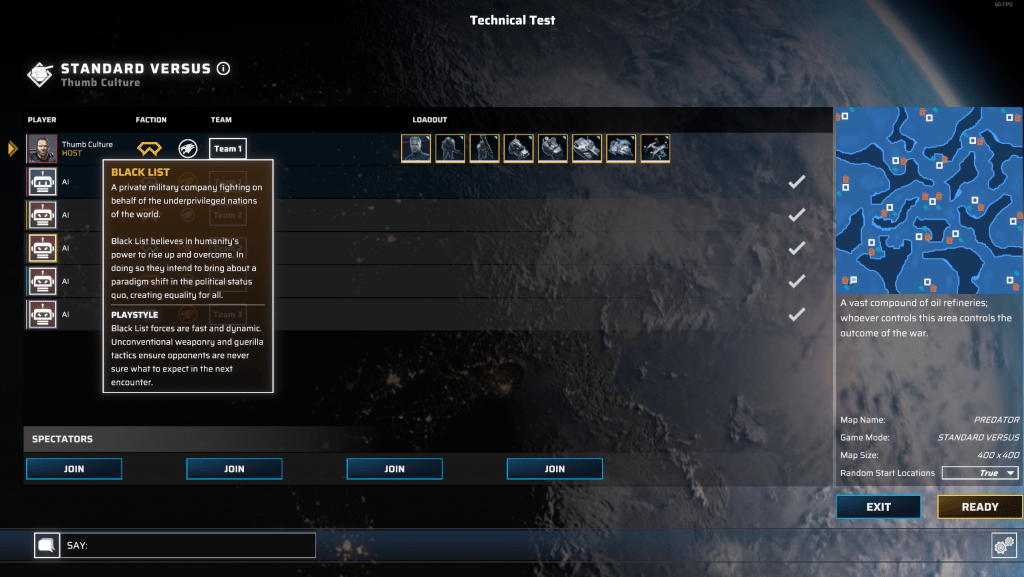 The Global Risk faction is a coalition of governments trying to maintain control of the planets’ population.  Their playstyle relies on numbers and consistency and prepares a second army ready to join the battle if the first fails. Phoenix is the commander and his abilities are the Ghost Core ability and Ghost recall ability. Both once used are set on a cool down to use later on. 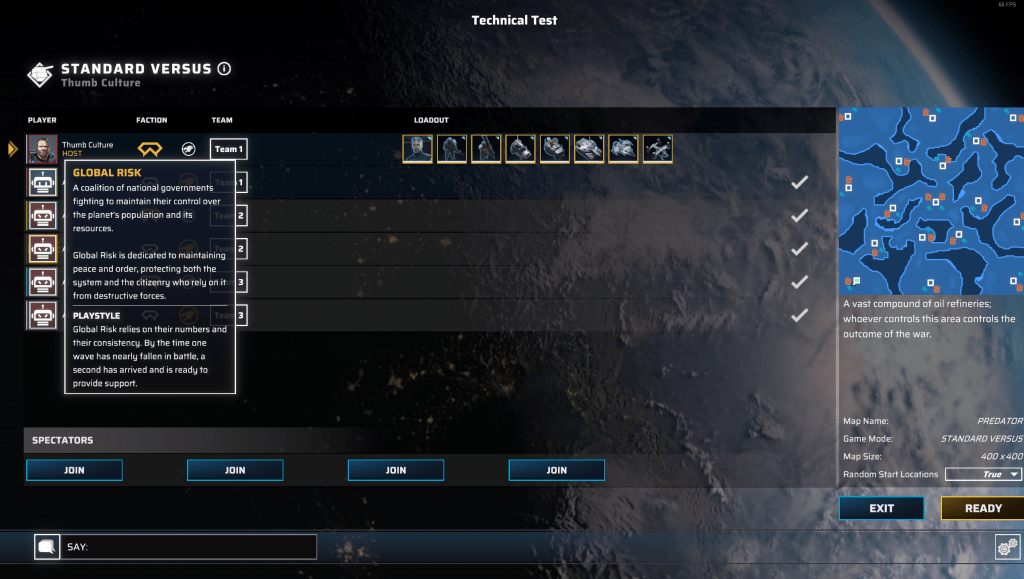 Once you’re in the game, you start to build your base and army. Firstly, though, is to get some workers on the go in order to start collecting resources which permits you to spend on your army. 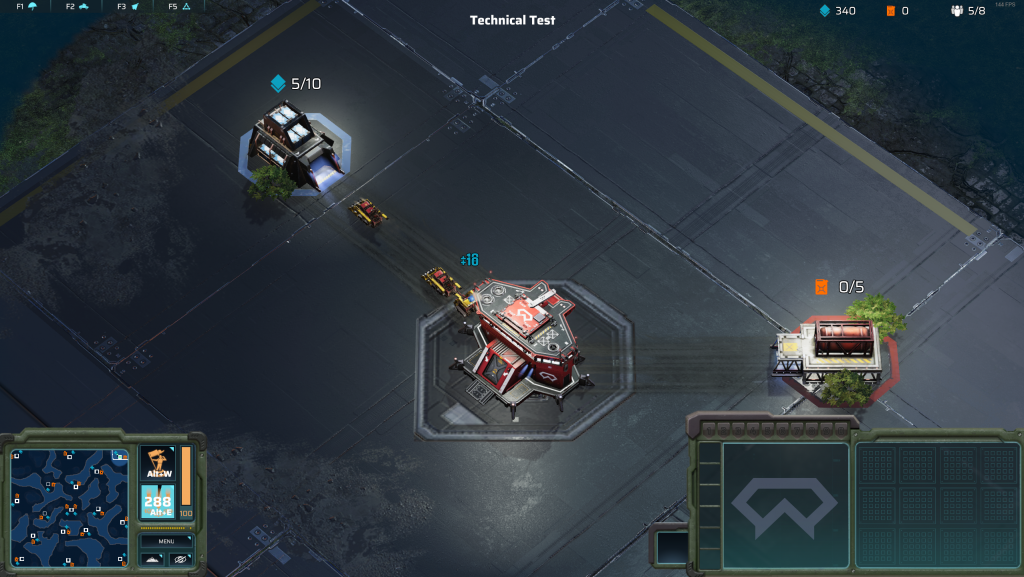 As your resources grow, so does your army and base.  The key to all RTS’s is what do you do first? Get an upgrade on the go to advance tech? or do you get an army going just In case of invaders? Well, for me, I choose a bit of both.  Get enough works going to start getting in the resource and little by little I upgrade the base, and get my army ready, mainly for a quick defence on a sneak attack.

You are then in a good position to progress the game, using tactics and resources to gain that advantage over the opponent. One restriction that I did find was that the maximum number of units you can have is 200 (you need to keep adding storage in order to get that total).  That unit size isn’t bad but, it does mean if you’re on the attack, you need to queue up more units as you could get caught short once they bounce back.

The only thing left of the preview I had was how to build the buildings.  Well, all of this is controlled by the workers.  By selecting them, they have a build option and from there, you can build and expand. 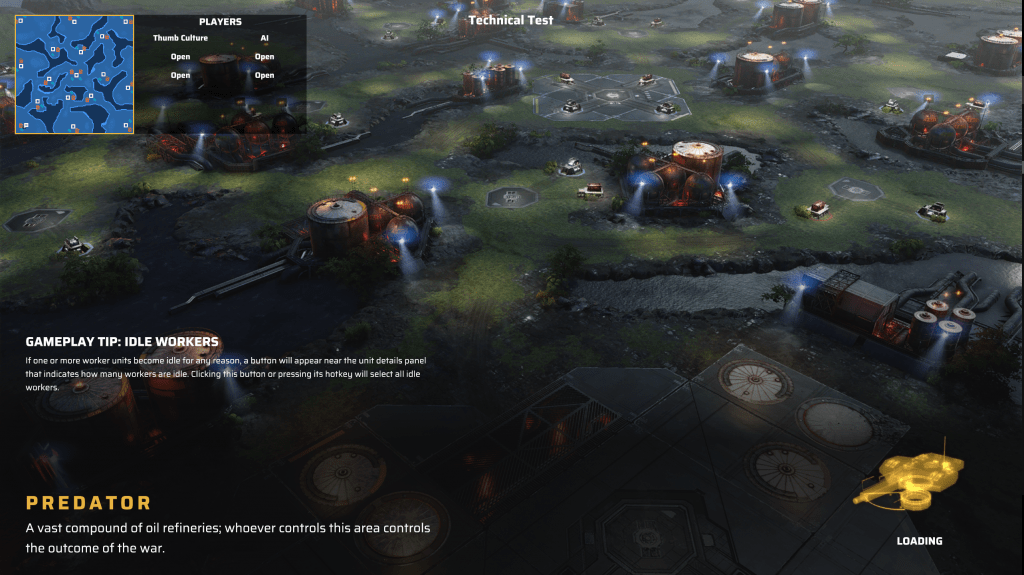 The audio is epic and classic battle-themes as you would expect.  When the enemy is knocking at your door, the music amps up and gets you right in the zone to fight back.  As for graphics, they are looking pretty good for a preview.  However, one thing I didn’t like was the zoom-out; it just wasn’t going far back as I would like. 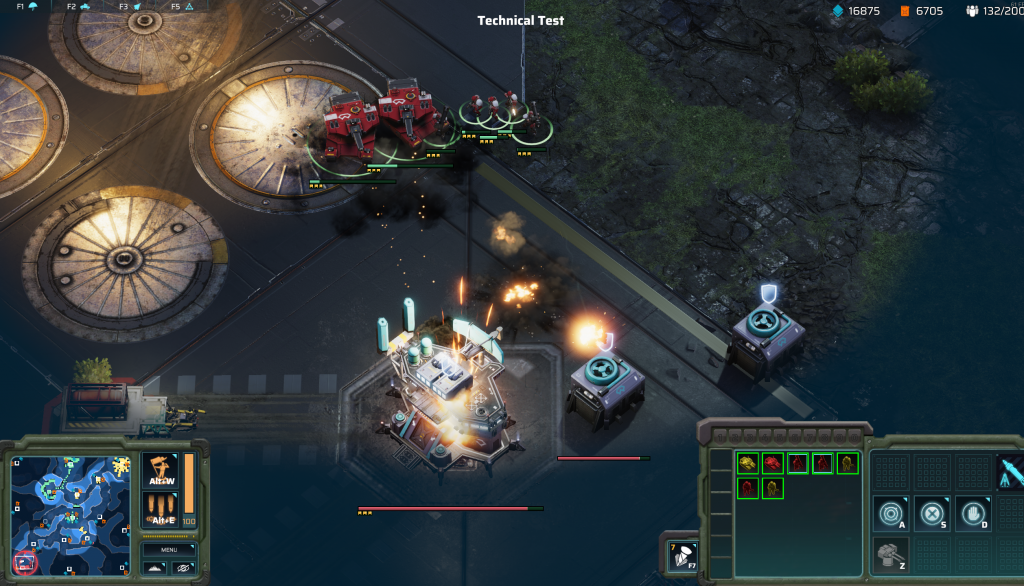 I was playing at 2560 x 1440, but I felt I was very close to the buildings on max zoom out.  I think it needed 2 or 3 points back so that you can see more of your base and units, especially once someone was attacking but, it didn’t put me off playing at all.  It still felt like a great homage to the old C&C.

I can see many hours being played with this if the preview has anything to go by, along with the planned road map.  A lot of additional content is on its way and I can see it being a contender for a big online community too, just like the FPS.  In the preview, there are menus greyed out for a campaign and for ranked modes and matches too.

I can’t wait for more content to come and start seeing this game taking shape.  I can honestly see it being the spiritual successor to Command and Conquer, as there are a lot of elements to the preview that brings back those nostalgic feels from back in the day when first playing C&C. As Sheev Palpatine once said, “We Will Watch Your Career With Great Interest”, this certainly is what I will be doing with Crossfire: Legion.