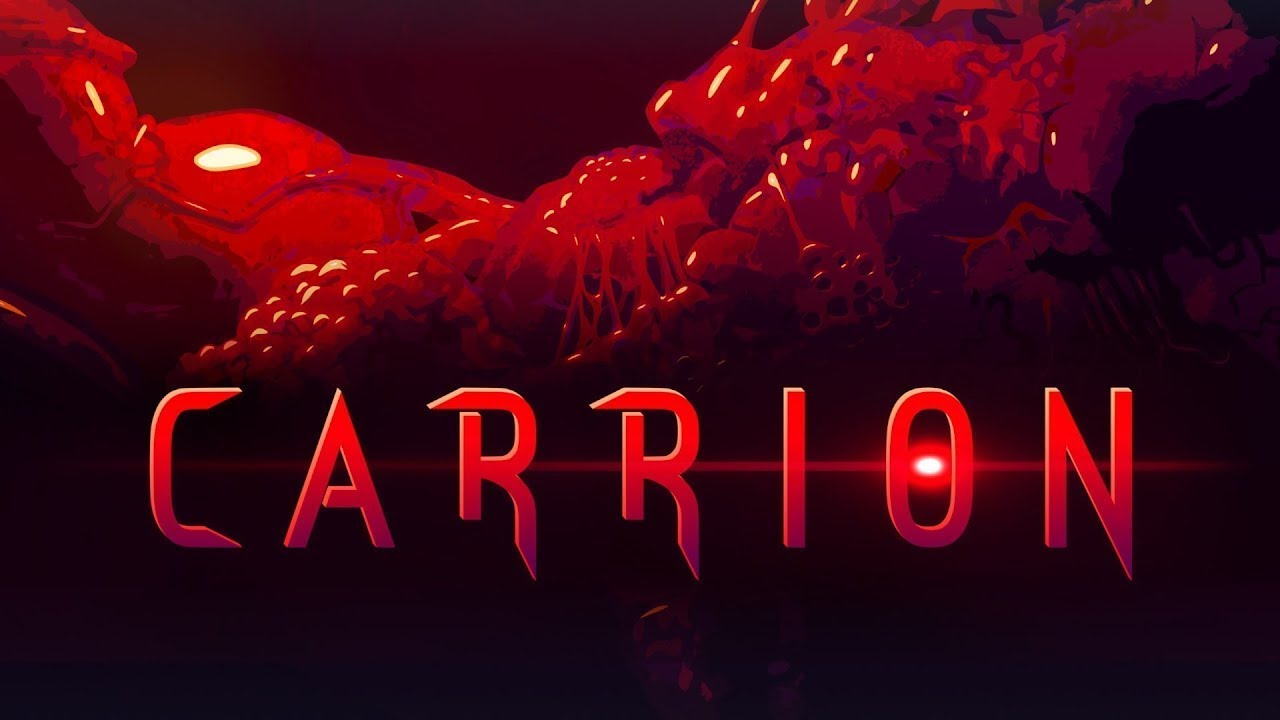 Carrion is deemed as an important food source for scavengers and stems from the Latin caro; which directly translates to meat. Meat is quite an accurate description seeing as the protagonist is a gristly, fleshy tentacle monster. In Carrion, you start as this mysterious creature who is escaping from a lab and lost in a Metroidvaniaesque labyrinth as you try and seek out your freedom.

Carrion is the sophomore game from Phobia Game Studio and is described as a reverse-horror game. Whilst their debut game, Butcher, flew under the radar back in 2016 Carrion has been thrust into the spotlight with a multi-platform release and even launching as part of Xbox Game Pass.

Carrion starts off in an eerie and dark lab but as soon as you break free from containment you immediately gain a feel for this unconventional character. The way the little meat popsicle moves around the screen feels absolutely incredible as you find yourself easily navigating in both dimensions. Unlike traditional sidescrollers there are no jump or crouch options, you’re almost moving in this 2D space as if it was water, the tendrils reaching in the direction you aim the analogue stick and that smoothness of the movement really stands out. It seems odd at first but the level design really does lend itself to the momentum of the beast; you won’t have to master tricky jumps or manage complex feats of digital athleticism in order to successfully navigate around.

As you progress through the environment you start to uncover various skills; these range from mind-controlling flesh sacks (AKA humans) to unleashing an obnoxious number of deadly spears into your foes. The combination of the skills allow for quite a bit of flexibility as you approach the levels in front of you – will you stick to the vents and try and slow pick off the enemies one by one? Will you barge through like a needle encrusted wrecking ball? Or will you find a combination of the 2 more your style? These options are actually an area where the game really strives.

Unfortunately, whilst the varying skills and combinations make for an interesting dynamic, you’ll find yourself settling in to 1 style no matter what enemies are in front of you. Not only that but you’ll also find that certain arenas force you in to a particular play style that might not be what you’ve adopted previously. In my case being forced to sneak through vents because the enemies are too tricky to approach head on meant that I had to learn a new approach to my patented bull in a china shop dynamic; whilst this can make the game more engaging I did find some parts quite frustrating in the late game.

Another brilliant element to Carrion however, is the fact the blobby fleshball grows as you progress, meaning you end up with 3 distinct phases (albeit simply defined as small, medium and large). These different sizes and shapes open up new skills and new techniques to push forward but also bring in that Metroidvania element as you get to explore previous levels in a whole new way. From ripping through materials that were previously indestructible, to turning invisible in order to sneak past a security system – these new skills open areas of the map that were previously unseen. You can grow through these stages by consuming the enemies’ en route, and you can also offload some of your mass into rather unpleasant looking cesspools.

The game itself is subtly broken up into individual levels. Whilst you have one overarching map, at key points you’re able to enter a new smaller area. You then work your way through these sections, which are usually met with the unlocking of a new skill. Upon exiting these areas you’re presented with a screen that does represent whether there is more to find, whilst simultaneously opening up the map further. Whilst this becomes a nice in-game mechanic and certainly adds to the aesthetic of the lab-based biomes it also leads to the games other big frustration; there is no map. Whilst I appreciate it’s likely an intentional game choice for the meaty fleshbeast not to have a detailed map of the inner-workings of a secret underground lab, there is actually room for one. At certain stages you’re literally embedding yourself within the walls of the installation, surely an interconnected network lies behind the scenes that could potentially act as a map and/or fast travel system? Maybe this is a lesson for the developers if we ever see a follow-up.

With pixelated artwork Carrion is certainly not for everyone but what really does sell the visuals is the movement. The way the movement is somewhere between slithering and web-slinging is really satisfying and as mentioned above that freedom of movement is really enhanced by how it looks. There isn’t much depth to the artwork and that does mean certain details are amiss; for example none of the humans have faces and it’s hard to make out the detail of the titular clump. But with some clever lighting and use of colour Carrion really does standout with a unique style. I must admit at certain points I would just find myself doing laps of the screen to admire the animation work and the engine in place as the creature pulls itself along.

There are also a small number of sections that act as flashbacks which give you some insight into the origin of the beast. These sections are played out as a human and have their own style with an overlay that represents you seeing the events through the eyes of the creature. This gives another unique edge to the game and helps frame the story without actually having a structured narrative.

There is certainly a minimalist approach to the sound used in Carrion and that 100% works in the game’s favour. With the roars of the monstrosity echoed through the halls mixed with the screens and running of humans it lays down a very distinct atmosphere. Some enemies also carry their own unique sounds from the chunky robotic noises of mechs to the bladed whirr of a drone. Naturally, these modern pixel art games are designed to represent the 8-bit and 16-bit eras of the past, and whilst they do achieve that it is somewhat disingenuously with a layer of modern flair. That’s both apparent in the way the lighting works and the number of on-screen elements but also in the sound design; there are no low quality midi-files or repetitive 10 note tracks on loop.

Also, fans of the musical beats used in John Carpenter’s The Thing or the more modern synthwave stylings of Strange Things will really love the approach to music in Carrion.

Clocking in at approximately 5 hours including unlocking the elusive 100% achievement it’s clear that Carrion isn’t meant to be a world-breaking marathon. That being said Carrion doesn’t overstay its welcome either and the duration feels just right for the gameplay and the narrative the developers are weaving. It’s also a game that does lend itself to be revisited for those wanting to explore the different approaches to the game. I will say if a map was introduced then naturally that would shorten the experience as you’d remember exactly where you’d seen that impassable barrier or where a corridor wasn’t fully unveiled.

If you like the idea of playing as a sticky lump of flesh then Carrion is the game for you. If you don’t fit into that category, then there is still a lot to love. The game has an excellent aesthetic and the excellent level design and skills make it a pleasure to explore. Whilst it’s certainly an unconventional game it leans nicely into some tried and true staples of the genre and hopefully is a step in the right direction for Phobia Game Studio. Personally, I thoroughly enjoyed my time with Carrion, however, the repetitive gameplay and lack of map did hamper the experience overall.

Taking inspiration from classic movies like The Thing and mixing that with the modern pixel-era Carrion really does become a unique experience and I reward this game with a silver medal as a result. I really can’t wait to see what Phobia Game Studio do next; hopefully another foray into the life of this strange creature and what his future might hold.