Ever wondered what it’s like to be a McDonald’s employee?  Despite the fact you’ve to build burgers in this game then you’re probably looking in the wrong place. At least I’m hoping the employees aren’t standing over the ingredients or being chased by life-size pickles. As a salad dodger, I seemed to enjoy BurgerTime Party a hell of a lot more than I should.

The amazing publisher/Developers G-Mode Games & XSEED Games have brought what I believe is one of the most fun games for the switch I have played yet. An arcade-style game with multiple ways to play it means I can even get my womb raiders involved. 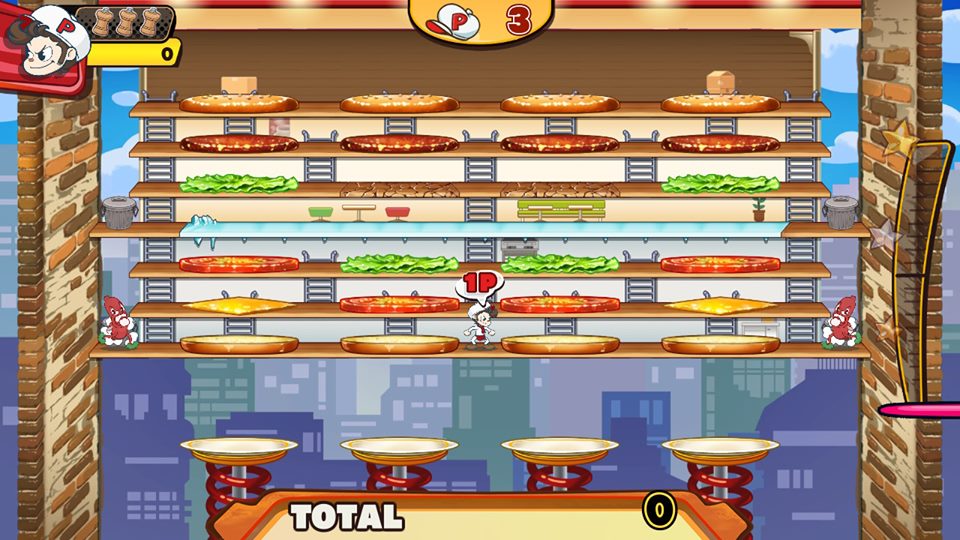 BurgerTime Party is an arcade game where you need to navigate the screen using ladders and various platforms. This includes ones you can use with a lever or even ones that crumble after a certain amount of time walking on it. You then have ones that are just conveyor belts that send you flying into the enemy, or away! You’re doing this all whilst various pieces of chopped vegetables. I forgot to mention the sausage and eggs! they come after you and whoop your bottom, totally unsure as to why they’re coming at you. Maybe it’s due to the fact you’re stamping over their great grandparents to slap into a burger for someone.

Further on in the game when you’re being chased down there are vents available you can slip down to escape, but ensure that they don’t take you to yet more enemies!!!

Each enemy has a form of pattern around the map, you quickly learn the movements. This means it keeps you on your toes, especially when they throw numerous enemies that do their thing at you. However, don’t panic you’re armed with a pepper pot you can spray to knock them out for a few seconds. 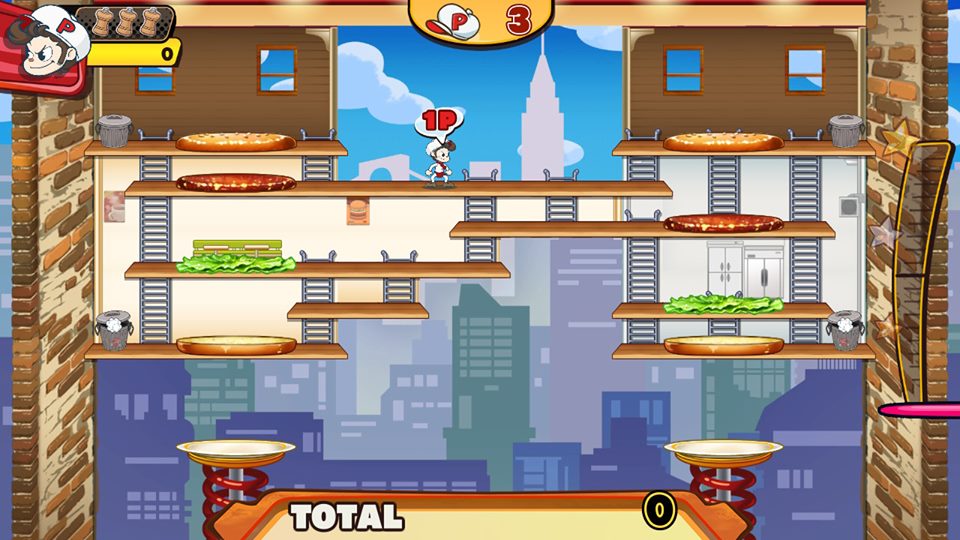 If you do get bored playing BurgerTown Party on your own despite the fact there are over 100 different levels you can use local play and go against your friends. You can also head online to beat numerous other high scores. However, remember, the high score in this does not mean how fast you can do it! They are based on how many times you can build the burger whilst knocking down the enemies. check patterns of the enemy and you’ll be top of the world (eventually).

The only negative part I would have about this game is the fact a lot of the time I knocked the enemies down the floors. They often climbed some invisible stair back up to the platform, where often enough at first I just wasn’t ready for it and they got me!

Playing on the switch I find this looked pretty good! Very cartoon style but certainly not the worst game I’ve witnessed on switch graphics-wise. I didn’t come across any graphic glitches ( unless there actually are ladders from the built burgers to the platform) you could certainly make out what enemies were what!

The BurgerTime audio was pretty cute. From simple little jingles to noises when you hit your enemies down platforms to comical noises when going to burger heaven. It all sounded great. The only thing I would say to change would be to add an enemy spawn noise to inform them of being close.

I found that BurgerTime Party was a nifty pick-up and play the game. Meaning if I was bored of the usual game I’m grinding I could easily just pop back over to play this and it will cure my rage/boredom of the previous. With so many levels and the option for multiplayer it’s endless for the time I could play this. It didn’t get boring either which is a huge plus for me. If I wanted a change of scenario I’d return to a previous level and just try to beat my high score!

Playing BurgerTime not only cured major boredom, but it also became one I could play any time I wanted. The levels weren’t long and draining at all. If anything I’d spend more time trying to beat my own score whilst waiting for the kettle to boil. When I had a spare 5 min at night and wanted something new to feast my eyes upon. I will be continuing to play this game even after the review has been published. Finding out it’s a remake of an 80’s game makes me want to play the original so I can compare. So there may be an update to this article yet!

I’m going to give BurgerTime Party the Thumb Culture Gold Award! I had so much fun and I’m sure you guys would too!