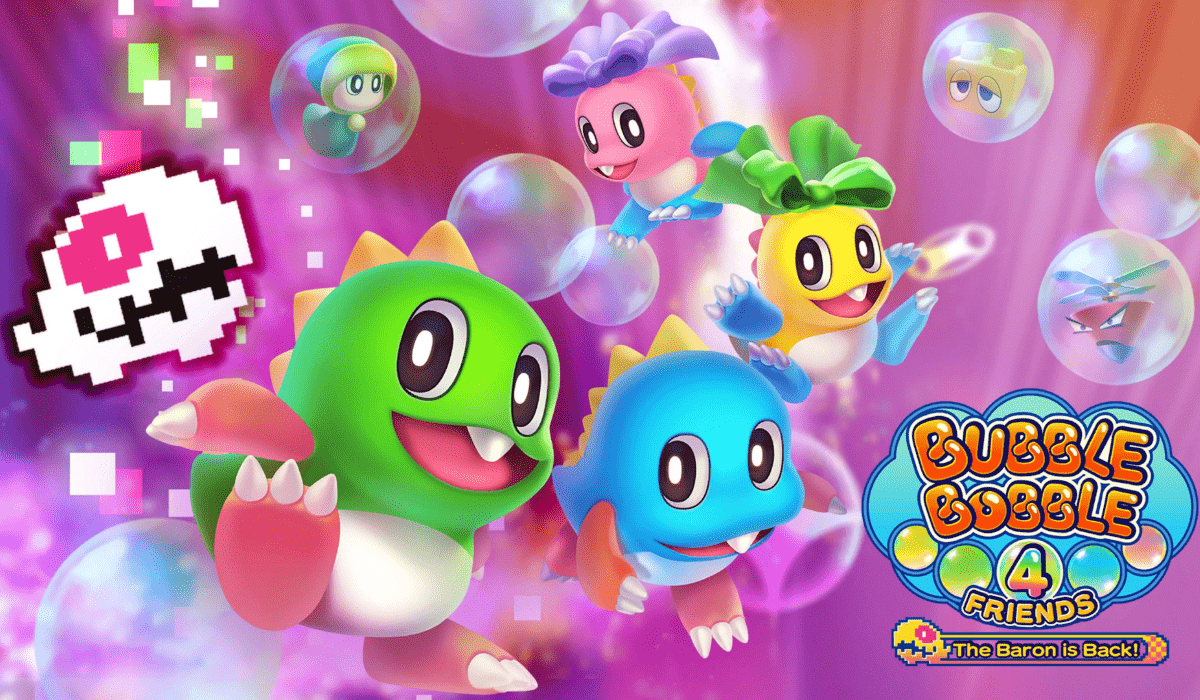 Bub And Bob Have Been Away For A While, Find Out What’s Next In Our Bubble Bobble 4 Friends: The Baron is Back PS4 Review

For further reading, I suggest you check out Rainbow Islands and Parasol Stars.  But, we are here to find out if Bubble Bubble 4 matches up to the franchise’s legacy.

Listen up noobs, this boomer is going to school ya!  Bubble Bobble was an arcade game released in 1986 by Taito starring our dragon heroes Bub and Bob.  The quest, of course, is to save your girlfriends from the clutches of Baron Von Blubba.  The game was so successful it is often referred to as the granddaddy of the ‘screen-clearing’ style game.  As a result, it was ported so over 20 different systems and spawned numerous sequels and spin-offs over the last 34 years, one of which being the massively popular Puzzle Bobble, otherwise known as Bust-A-Move.

If you are familiar with the Bubble Bobble series, then you know what to expect.  Here we see much of the same, with some modern additions and a charmingly cute facelift.  It is a proven formula that has worked for over 30 years so if it ain’t broke, don’t fix it.  The story this time is to guide your dragons through 100 levels of puzzles, enemies, bosses, and finally, the wicked wizard Bonner.

Blowing bubbles is just as fun as ever.  Blowing bubbles to trap your foes in which you have to pop to eliminate them and collect the fruit they drop for points.  If you can eliminate more than one at the same time you are awarded a combo points bonus.  Once all enemies are eliminated on screen, it is time to savour the fruits of your labour, literally.

Get around and collect the fruit as quickly as you can as it is time-limited and move on to the next stage.  After 10 stages you will then encounter a boss which doesn’t really prove too challenging in the first few levels.  Although, as challenging as it can be with one-hit kills, the idea here is to have fun.  And as such, if you fail a level 3 times you are given the option to play with invincibility mode turned on.

In terms of the gameplay itself, there really isn’t a lot to it, sticking to the tried and tested classic formula.  It’s a classic two-button affair akin to the games of old, just jump and blow bubbles.  The real challenge is taking the simple control scheme and applying it to the more frantic stages.  An additional action has become available now in the form of being able to crawl into spaces.

Keep an eye out for bubbles containing the letters E-X-T-E-N-D.  Grabbing all these time-limited bubbles across the stages will reward you with a power-up once the level is complete.  These power-ups such as lightning bubbles, or the ability to shoot from further away are particularly advantageous in the later stages.  Choose wisely, and it also kits out your character with a cute little outfit. If you are after a more retro experience, then the full original arcade version is available from the outset.

This is where the ‘Friends’ part comes in.  Bubble Bobble 4 is a good game just to pick up and play on your own, but playing with up to 4 friends is great.  Also choose your friends wisely because although this is a co-op, much like any other multiplayer experience the temptation to murder your friends is real!  But, let’s assume you intend to play the game properly for a minute.  If a player is hit by an enemy, they are then confined to a bubble of doom and start floating about.  If your friends are nice, they have a limited to come and rescue you which isn’t as easy as it sounds…as my co-op partner found out.

With an emphasis on couch co-op, it makes sense to have online play which for this style of game is a significant oversight.  Lastly, with a focus on teamwork, it feels a little out of place that there aren’t any competitive modes.

While the characters have somehow got cuter and look adorable to the point the even I would buy a plushie, I was expecting the stages to be a little more colourful.  There are little flourishes and flair when activating power-ups but on the whole, the stages feel a little pastel to look at.  With it not being a visually formidable game, the gameplay felt quite smooth and polished.  Even when there was chaos and mayhem on-screen, I didn’t notice and frame rate issues on the PS4 Pro.

Like with the graphics, the sound design won’t be winning any awards neither.  They serve its purpose and suits the gameplay well.  Though we are treated to a modern rendition of the original Bubble Bobble theme which I thought was a nice touch.

If you’re playing through the game on your own it can be done in a couple of hours.  As mentioned earlier, the fun to be had is playing with friends.  With that said, it can go stale after a few hours with the lack of online or competitive game modes.

Though my time with Bubble Bobble was short, I did have a lot of fun playing it.  And with it being a family-friendly game, it is accessible for all.  The old formula of Bubble Bobble still works. However, it could definitely do with more content to make it worth the investment.  More modes, more levels, more bubble meaning more fun.  Also, as a sidenote, Baron Von Blubba isn’t back, you don’t see him once!  I want my Baron.

I award Bubble Bobble 4 Friends: The Baron is Back the Thumb Culture Silver Award 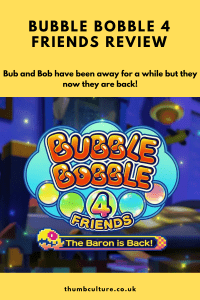