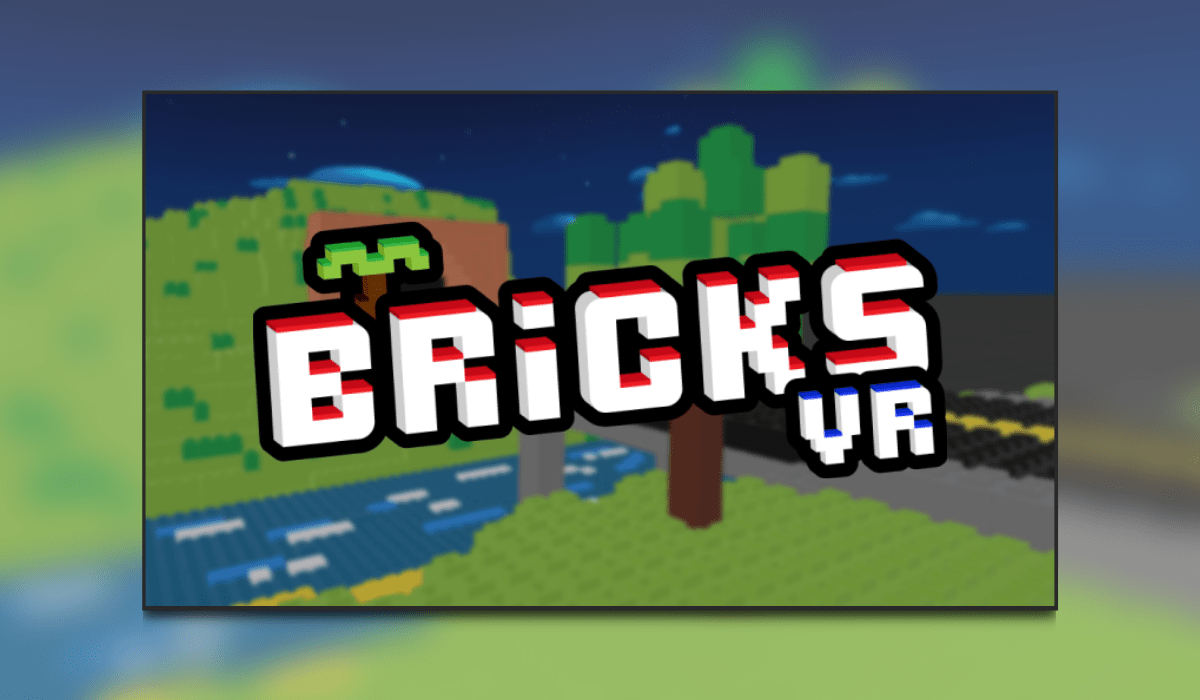 Bricks VR Studios bring you BricksVR! This is their first title which has been developed and published by them in house so let’s dive in and take a look.

Think of a never-ending Lego simulator but in VR and you don’t have to clean up after yourself!

BricksVR was released in early access on 30th June 2021. It is available on Steam and Oculus store via the AppLabb. It is currently only available to play on Oculus Hardware (Quest/Rift) however we asked the developer a few questions about the game and he covers this and more a little further down.

If you have the game or are thinking about getting it, let us know in the comments below. You could even join the discord server and have other people to play with as well!

Gameplay is smooth, simple and the controls are easy to learn. On the Oculus touch controllers, the thumbsticks cover your movement around the map or up and down in height. The two trigger buttons open the menu screen while the grip buttons are used to make menu changes and also selecting and moving your bricks.

You start in a massive open space standing between two green tables. The platforms for your potential masterpieces. You open the menu using the back trigger of either controller and see a clear and easy to navigate menu. A list of different brick types down the left-hand side. The centre is your list of bricks waiting to be selected by grabbing them with the grip button, and on the right hand side is the colour selection section. The colour selection is a great area in which you grab and drag between 3 separate bars. The top is your colour or Hue, followed by Saturation and then Brightness. You have an unlimited colour palette to choose from.

There is also physics in-game. From throwing bricks around to dropping them and watching them fall over the edge of the table the bricks have weight to them affecting each one differently. It all works well together to create a pleasing environment.

There is also an online multiplayer mode. Playing in multiplayer mode gives the game a whole new feeling. It turns it from a building game to a social space interacting with friends via a joinable room code. You can place bricks on each other’s heads as little hats and the player scaling gives place to some other options such as travelling through your creations together.

While the game graphics are on the basic side due to the nature of the game, it is still a very visually pleasing game to spend time in. The grey carpeted floor and blue sky with some pretty clouds work well however I would love to see some customisation options around this in the future where you could maybe select different “worlds” or create your own. Due to the games massive colour customisation for the bricks, you can make some truly great creations full of bright colours which displayed perfectly in my Oculus Quest 2.

Game audio mechanics work well. It has a subtle but effective clicking noise when you place each brick to let you know that it is in place and attached. I found this to be a nice touch when trying to build large designs quickly as you get that confirmation without having to be looking directly at your creation.

As with most creative styled games the longevity depends on the user. I’ve spent around 10 hours so far playing BricksVR and I’ve enjoyed all of my time. The never-ending colours and designs are limited solely by you as an individual. Group up with some friends and the fun factor continues to grow. This could easily be a social game with creative building thrown in for good measure.

I was lucky enough to have some questions answered by the developer for my reviews so let us check those out.

Q1. Do you have any plans moving on forward? (eg. updates to BricksVR or another title you’re working on)

A1. Now that we’ve launched BricksVR in Early Access. My focus will be shifting to preparing the game for the final launch later this year. We have a lot of big features in mind including 100s of new bricks, expanded headset support, improved graphics, a UI revamp, and a “destruction” feature where you’ll be able to destroy your creations with your fists!

Q2. What is your personal favourite aspect of BricksVR?

A2. My favourite part of BricksVR is the social aspect. Being able to hang out with friends from around the world and chat while idly playing with toy bricks. VR is the perfect medium for online social interaction, and I’ve personally met tons of new friends playing online VR games. This is why BricksVR has a number of features that don’t help you build but help improve the social experience. My personal favourite is how you can place bricks on other players heads and build them little hats. During a live stream we once built a whole body for someone by placing bricks attached to their head!

Q3. What is the best thing you have built in BricksVR?

A3. The only reasonably aesthetic thing I’ve ever built was a little hill landscape with a bridge that crosses a river. In general, I’m a terrible builder, most of the impressive builds on our social media come from our player base!

Q4. What’s your favourite snack when gaming?
A4. Is coffee a snack?? If not, probably just occasional nuts and chocolates. I try not to snack too much while I play games because I don’t want to get my controllers all dirty.

For its price point of £11.39 on Steam this game is definitely worth picking up. A very fun and enjoyable experience that delivers hours of entertainment. It has a great social side as well with its multiplayer options. I award BricksVR a Thumb Culture Gold Award.