As with any maturing technology, 4K monitors are slowly starting to go down in price since they’ve been around for a while now, but 4K monitors that also come with built-in HDR support are still pretty rare, making BenQ’s brand-new EL2870U something of a specialty. Without further ado, let’s see just how good this product, realistically, fairs.

The EL2870U comes as a 28” screen with a 4K TN (Twisted Nematic) panel, boasting HDR, Freesync and a 1ms response time to boot. On top of that there’s a pair of anaemic built-in speakers, a couple of HDMI 2.0 ports, a single DVI 1.4 input and BENQ’s eye care tech for those who spend their life in front of their monitors. In case you aren’t sure what HDR is, this next part is lovingly just for you – HDR, or high dynamic range, is a bit of display wizardry that allows a screen to show a wider range of colours than normal and boosts its contrast levels way beyond what you’d typically see on a non-HDR display, allowing for brighter, whiter whites, and darker, blacker blacks. It makes images look more life-like and is generally a very good thing that will improve the quality of whatever is being displayed onscreen, be it a TV or PC monitor.

Since the EL2870U is being targeted at gamers who want an affordable 4K gaming experience, BenQ has included support for AMD FreeSync to help attract more gamers. AMD FreeSync technology is an adaptive synchronization technology that is used to reduce screen tearing by synchronizing the refresh rate of the monitor to the framerate of an AMD Radeon video card. Both AMD FreeSync and Nvidia G-Sync behave very similar, but what it comes down to is cost. AMD does not charge monitor manufactures a licensing fee to use the FreeSync technology whereas nVidia will charge a premium price for it which is why G-Sync monitors are more expensive than FreeSync monitors.

The refresh rate of the EL2870U tops out at 60Hz which is to be expected from a 4K monitor. Having done some investigating of my own, its concluded that any monitor claiming to have a higher than 60hz refresh rate at 4k is probably not correct and it is more likely using frame interpolation which introduces input lag. Also, HDMI 2.0 is limited to 4K @ 60hz which is fine for movies, streaming and casual gaming, but for competitive gamers who are into fast-paced games such as CS:GO, it is better to go with a monitor that has a 100Hz+ refresh rate at 1440p.

The BenQ monitor arrived in a fairly slim box, which surprised me as usually you’re faced with a clunky cardboard monster where you have to maneuver around your door frame, taking out some ornaments and maybe a child’s eye in the process, but this package was extremely manageable. BenQ includes fairly decent quality cables and the components inside are well packaged and everything feels well secured inside the box.

Inside you will find the 28” monitor, the stand/base, power cord, 1x HDMI 2.0 cable and a quick-start guide with documentation on a CD-ROM. The EL2870U is tightly protected by two high density foams as shock absorbent and plastic wrapping to prevent any accidental damages during shipping…which thankfully, mine didn’t succumb to.

It may not appeal to everyone compared with some more flamboyant gaming monitors, but for me, its sleek lines and restrained stand suited my home, with its gun-metal grey and blacks liable to match any desk you decide to set it on. Additionally, there are two 2W built-in speakers that are extremely adequate, saving you space and money here rather than having to wonder what speakers to buy or where to put them if you’ve limited space. 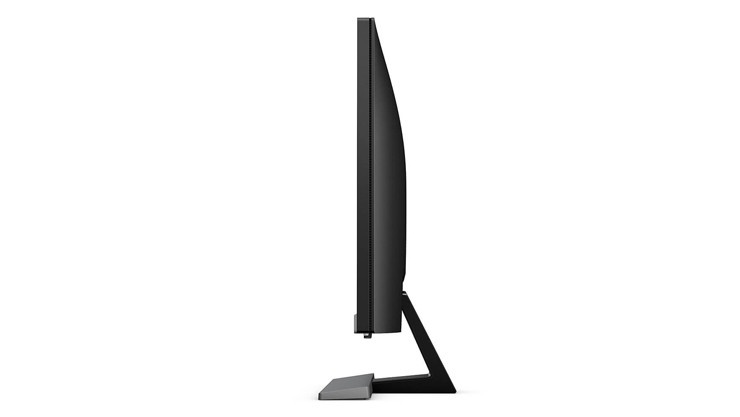 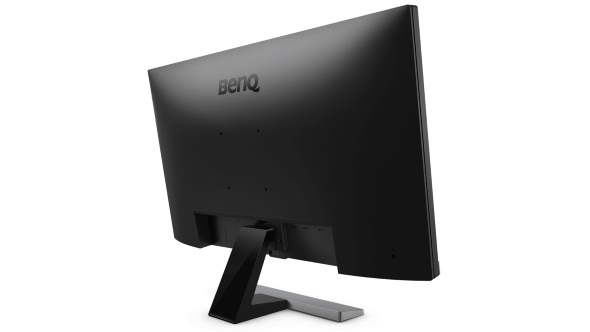 Physical setup is brilliantly simple: the foot attaches to the stand easily with a thumb-screw, and attaching the stand to the chassis requires a screwdriver to tighten things with only a few twists, after you’ve clicked it in. This monitor only offers tilt, sans height, swivel or pivot – though at least there is provision for VESA mounting, so you can attach the EL2870U to a third-party stand that can provide any level of flexibility you wish

The main asset of the TN panel monitors is the rapid 1ms response time speed which eliminates ghosting of the fast-moving objects. In video games, I was able to enjoy FPS like Wolfenstein II: The New Colossus and Overwatch with minimal motion blur. However, such speed comes at the cost of color quality and viewing angles. Even though the testing I carried out concluded that it is sharp, bright, colourful, and does the best job of any of the 4K HDR content I could muster to show this TN panel at its best, it’s still short of doing high dynamic range content justice. The big problem is this panel just doesn’t have the necessary range.

The very brightest areas look excellent and the footage is crisp and colour popping at 4K, but it’s the dark areas where you can really see where this panel fails with HDR. There’s no depth to the shadows, and lacking slightly on detail.

Onto trusty Netflix to see how this simple but sleek monitor handled in 4K HDR. One of my favorite shows to test out a new monitor or TV with is Stranger Things. Specifically, the first season has an incredible array of 80’s themed colours, as well as a lot of darker shots that are a great test for any 4K HDR monitor. I’m happy to report that BenQ EL2870U handled it pretty well. There’s no denying that this monitor has a crisp display and the level of detail displayed is really impressive, but the one issue I found, not only with video content, was the HDR “pop” was very subdued. The colours are not washed out but they don’t have quite the pop that you will find in a monitor marketing a 4K HDR display.

Enabling HDR for the compatible content should make the image more lifelike, but due to the limitation of the TN panel, you shouldn’t expect a significant improvement. The BenQ EL2870U monitor also offers the ability to emulate HDR for the non-HDR content.

Good high dynamic range content is able to provide extra depth and detail at both the highest and the darkest extremes of the content, but the limited panel used in the BenQ doesn’t really stand a chance here as there is no way you could use the monitor in pure HDR mode, making that appealing gold button on the front pretty much invalid. Having the 1ms response time is great, but for HDR the trade off made in color and black level with a TN panel as opposed to an IPS panel isn’t worth it.

Another nice touch was the FreeSync feature, although I didn’t have a console available to test this time, I stuck with PC, but pairing this monitor with an Xbox one is ideal as an Xbox One update has brought Freesync compatibility to all versions of the console, and in some cases this could be a complete game changer, especially for those trying to decide which console will give them the best performance.

Freesync, much like Nvidia’s proprietary G-Sync, is a technology that sees your device and your monitor work together to vary the refresh rate dynamically to eliminate screen tearing and allow for smoother frame rates, and while PC gamers have enjoyed this technology for a while, it’s completely new in the console space. I ran PUBG with FreeSync enabled and didn’t see any of the screen tearing which was present before. Under the right circumstances FreeSync should help smooth out other games that have intermittent frame rate drops or screen tearing. 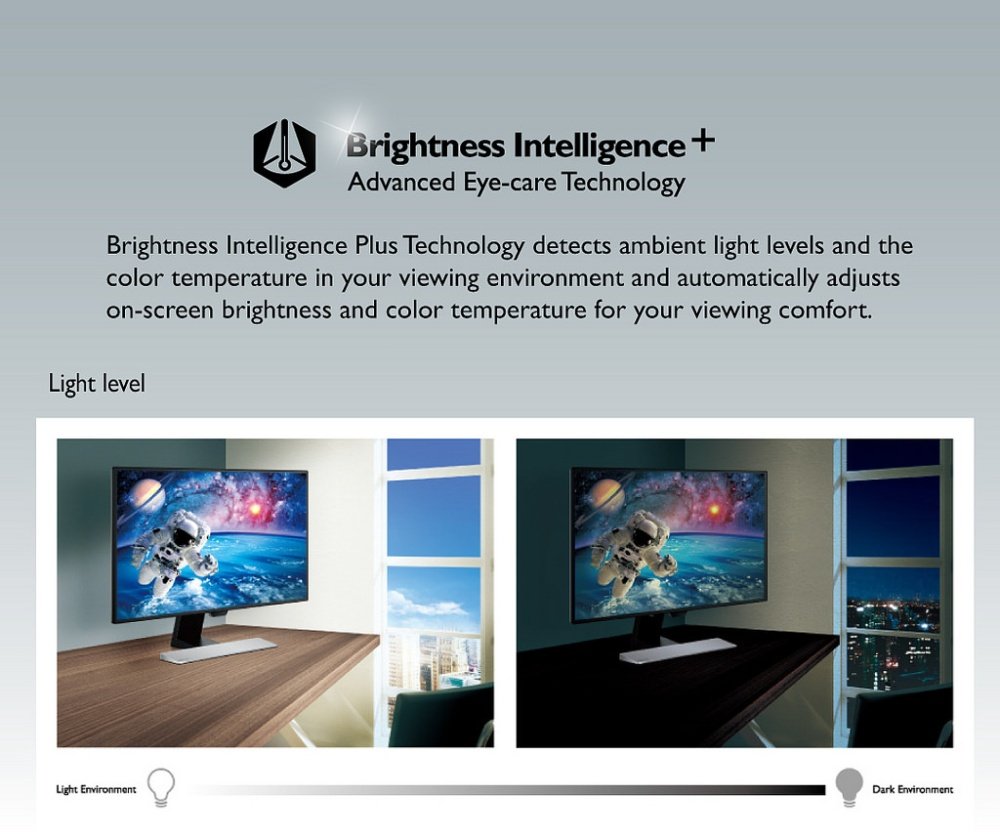 One of the features I thought performed amazingly was the Brightness Intelligence Plus technology. This adjusts the brightness and color temperature depending on the ambient light of your room. There’s a light sensor under the bottom bezel that can be turned on in the menu and it adjusts the brightness and color settings on the go. The ‘Adjust by duration’ setting slowly warms the colour temperature as the day progresses too, which is a feature smartphones use too. The idea is to help reduce eye strain throughout the day (there’s a Blue Light mode for this purpose as well). This worked really well for me as I can suffer from headaches brought on by staring at the screen for too long, but this was seriously reduced thanks to this nice bit of tech.

Without taking the HDR into account, the BenQ EL2870U has a really decent 4K picture, although with the drawbacks you expect from a TN panel. While not a dedicated gaming monitor it still offers performance and features that will appeal to any number of casual gamers, especially on a budget. 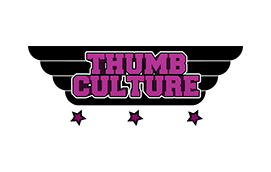 We received this monitor from BenQ for review purposes