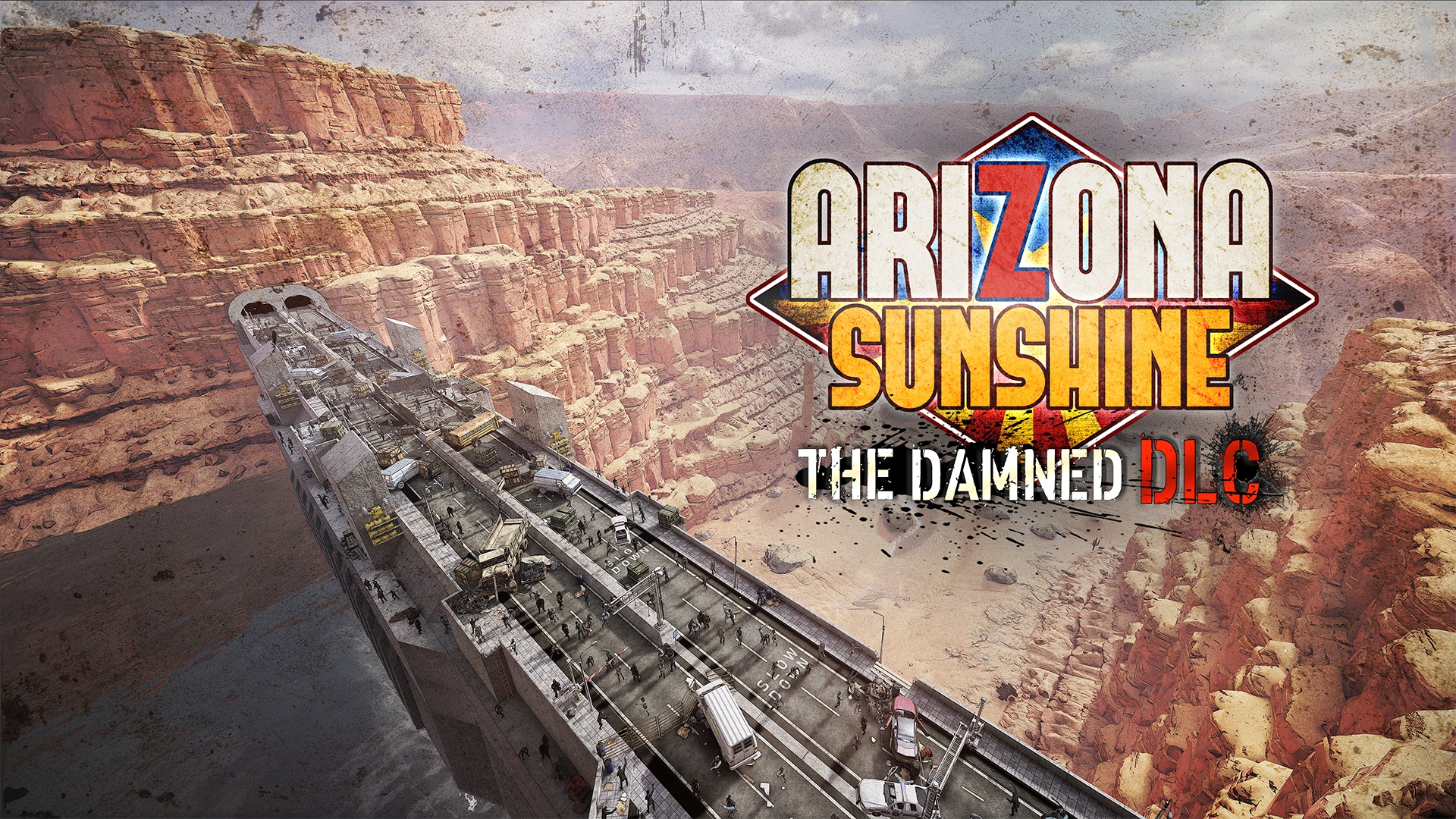 New from Vertigo Games and Jaywalkers Interactive comes some further DLC for their Zombie shootem up /survival game Arizona Sunshine. The Damned is the second DLC released for the game and acts as a prequel to both the game itself and the previously released DLC Dead Man. So is this extra slice of Zombie slaying DLC worth a look? Read on to find out…..

First of all Vertigo Games must be congratulated on a puntactic game title as The Damned takes place, yes you’ve guessed it, on, in and around a huge hydro-electric dam in the Arizona desert. The game opens with you in the familiar airstream trailer from the main game and The Damned is started by inserting the appropriate named videotape into the VCR. This can be a mission in itself as you need to get to grips with how the control system works before you are allowed anywhere near a gun or indeed any zombies. You start of as a member of a Special Ops team tasked with clearing the dam of the undead and turning the power back on. However, as with any good survival game, things don’t quite go to plan and you quickly find yourself on your own with the rest of your team lying dead with a horde of zombies shuffling towards you.

With only sporadic (and frankly quite helpful) radio communications from your base you are very much on your own. As soon as you exit the tunnel where you transport and your team met it’s end the difficulty of your task becomes apparent with the bodies of the last team sent to liberate the dam strewn across the top of the dam. This is the perfect opportunity to stock up and ammo and guns as the opportunities to restock once inside the dam can be limited. At this point in the game it is very tempting to peer over the side of the dam although if you suffer from vertigo it might not be a good idea! Your first goal is to find a way around the various burnt-out trucks and obstacles and into the dam itself. There are ladders to take you down to the side of the dam and there are plenty of zombies to encounter along the way.

As with the main game, it is very easy to get overwhelmed and you must take a tactical approach of stealth and all-out blasting to make any progress. There are many occasions throughout the game when going in all guns blasting will bring down a horde of zombies upon you and almost certain death. This tactical puzzle-solving element enhances the game from being a mere shootem up to something a bit more cerebral. At this point in my game, I encountered quite a useful glitch when I was killed by a pack of zombies on the side platform of the dam and handily respawned inside the main complex. I can presume that where I was killed was very close to the entrance to the dam! 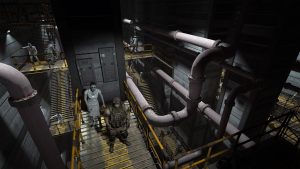 You will encounter a variety of zombies throughout the game from civilians to dam workers right up to body armour wearing soldiers who perished in their attempts to clear the dam. These latter enemies aren’t easy to kill and only a well-aimed headshot will do the trick. One tactic I found particularly useful when inside the dam was to shoot as many zombies as I could from above. With the way the walkways and platforms are built, you can shoot zombies below you and those behind locked gates so that when you find the release switch for the gates you aren’t suddenly overrun by a horde of zombies and inevitably killed. When you are overrun I do have one gripe with the game as it is very difficult to shoot the zombies that are right in front of you or in the case of when you have blown their legs off crawling on the ground by your feet. I probably need a bigger playing space for my VR setup but the game does not make it easy to kill the undead at close quarters!

Inevitably as you progress through the game the difficulty increases along with the number of zombies. I didn’t find the game punishingly difficult although ammo conservation and mixing stealth with all-out shooting is the only way to succeed. If you go in trigger happy you will quickly find yourself with a dearth of ammo and a surplus with zombies which never ends well!

I played the game using the Aim controller and this helped with the immersion. The movement was easy to get the knack of although I did find opening doors stupidly difficult. This was most problematic in the interior of the dam and I only managed to open doors by accident rather than design. This did get quite frustrating and I found myself stuck a couple of times because of this rather than being unable to solve a puzzle. Overall however this did not spoil my enjoyment of the game.

Unsurprisingly the graphics are more or less identical to the main game (as you would expect). As many PSVR owners know, the PSVR graphics do have their limitations but as PSVR graphics go The Damned’s are pretty good. The scale of the environments are excellent and when standing on the top of the dam and the top of the internal staircases you get a real feeling of scale in the game. The various zombies are well rendered, albeit fairly repetitive, and it is only when they get very close up that the graphical shortcomings are exposed. The interiors of the various areas of the dam are suitably dark and dingy and add to the overall atmosphere of the game. The views from the top of the dam are spectacular and if you don’t suffer from vertigo it is well worth taking a peek over the side when you are on the top. 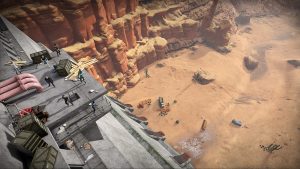 Survival horror games are superbly suited to the PSVR and the 3D sound really does add to the atmosphere and tension. You can hear the echo of your footsteps on the stairwells and the distant groans of the zombies alert you to their presence. With the sound coming at you from all angles you will be swinging yourself around to check that the zombies aren’t sneaking up on you from behind. The sound of the gunshots are realistic and add to your immersion in the game. I did find on occasions that the sounds coming from behind the closed doors made it seem like there were a large group of zombies behind it but when (in my case with some difficulty!) you opened the doors there were only one or two. This certainly ramped up the tension but did take away a little bit from the realism of the game.

As this is DLC you are not getting multiple hours of gameplay, however, there is more than enough content here (combined with the previously released DLC) to tide you over until Arizona Sunshine 2 (which I hope will happen…nudge, nudge, Vertigo Games!) or the upcoming After the Fall from the same devs. There is at least a good few hours gameplay here to keep you interested and Vertigo Games have billed this as the largest Arizona Sunshine mission to date. I myself will definitely be playing again to find out what I missed by being glitched into the interior of the dam! As with all PSVR games, motion sickness can have an impact on gameplay but thankfully I didn’t find this a problem when using the Aim controller. The movement was very fluid and it was possible to play the game for extended amounts of time. 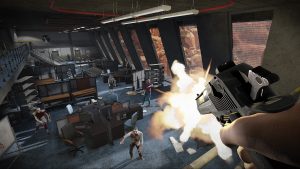 Arizona Sunshine came out back in 2017 and still stands up in my view as one of the must-buys for PSVR. Coupled with the AIM controller the game fulfils all your VR Zombie shooting needs. The Damned and its predecessor DLC Dead Man enhances and adds to what is already a great game and if you loved the original game then The Damned is a must to tide you over until Vertigo Games upcoming VR Zombie shooting multiplayer After the Fall or (fingers crossed) Arizona Sunshine 2. It is very much more of the same so if you liked the main game and the previous DLC then The Damned is definitely worth getting.